What a rebound the markets have seen. The Nifty has run away considerably in the last few months, with a double digit return on a one year basis. Capitalmind’s active portfolios have lagged in the one year time frame, but we’ve managed a post-fee outperformance in the 2 and 3 year durations. Momentum continues to perform and long term multicap is running decently too.

The market is back to all time highs, and this time it almost seems distasteful. The rally in stocks does not excite most participants because of the core feeling that the world is going into a recession. The inflation in the US is at 8.5%, and the Fed is relentlessly increasing rates. The war in Ukraine isn’t ending. And then there’s a strange price-cap on Russian oil from December 5, which is supposed to tell Russia to price oil below $60, or else they won’t buy, but they aren’t buying that much anyhow, and don’t necessarily want to tell India and China to not buy either. No one knows how this will pan out, so let’s just not invest, we think.

But Indian markets don’t seem to care. It’s the second best performing market of the year, in local currency, only second to Indonesia among the economies of some scale. This move to an all-time-high hasn’t had that much enthusiasm among retail investors, but the price speaks for itself usually. Markets climb a wall of worry.

In this context, India is an outlier, for some clear reasons:

This is of course the narrative. And we are the underdog. We have weak institutions. We have difficult cultural imbalances. We fight over things like which language we should speak. And yet, we have this massive opportunity that makes us look like a one-eyed-man in the kingdom of the blind. It’s ours to lose, I think.

However, everyone’s in on this story – that India will do well. It’s becoming visible to the rest of the world, too. There’s articles about it – like this Financial Times piece. This is a key risk, because being the underdog is fine, but the overconfidence can quickly set in when everyone is betting on you instead. To demonstrate, here’s a clip from the film “Never Back Down”. In a no-holds-barred fight, one of the fighters does a whole bunch of stunts: cartwheels, backflips and one-arm handstands, to impress the crowd. And then he cartwheels over to his opponent, who knocks him out with a single punch. The reason it’s impressive isn’t the single punch. It’s the showing off and the “karma” that’s the retribution for it. We should be careful that India doesn’t get caught up in the hubris.

We’re embracing it, though. Our long-term multicap portfolio will now be called “Surge India” – a bet on the maha-trends we believe will shape India’s future. In effect, nearly all companies will be impacted positively (except those that refuse to change). 80% of the portfolio will cater to the large trends we see, and with the remaining, we’ll tackle shorter term trends and special situations.

We’ve always liked prices to trend upwards, no matter what portfolio we’re in. So you might find that we buy even more when prices go up, because that’s what stocks are supposed to do: go up. Much about company fundamentals come after prices respond positively, primarily because there are enough people who know about what’s coming even before anyone else does. Not every price rise is reliable, so in Surge India, while identifying longer term trends, we look at price trends to help discover potential opportunities in the spaces we like. All things considered, a stock in an uptrend with volume and the right amount of liquidity will get itself in.

There are many ways to participate in markets. Some people focus entirely on “return on equity”, regardless of the underlying price of the stocks, a strategy that has indeed given great returns in a time when interest rates have been benign and supportive of higher valuations. Some others may focus entirely on growth companies, where the current valuations are supported by massive increases in revenues over time. And others may focus on value, where the stocks are at very low prices relative to revenues or earnings. Each of these strategies has made excellent returns at different times; currently, looking at public sector banks and companies rise to new all time highs every week, it’s the time for value to make its presence felt after many years.

Our momentum strategy narrows down on price and volume, and even at Surge India we look carefully at the underlying price trend to discover, analyze and invest in stocks. Price as  criteria isn’t any of value, growth or “quality”, but sometimes gives you a leading indicator to understand where any or all of these are emerging. While it may sound like high prices are dangerous times to invest in, the data simply doesn’t agree.

Anoop writes about investing at “high” prices. Or, indeed, what happens if you don’t. The simple answer: Nothing great, compared to just doing it anyhow.

The 1 year return after investing – a relatively short time, we know – is roughly the same if you invest or not, on any day that’s close to an all-time-high in the Nifty. In fact, the distribution of returns is also roughly the same. 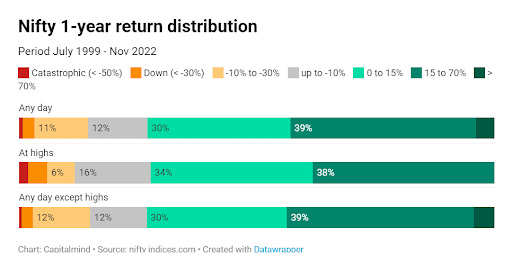 If there is no real advantage in “avoiding” the times when markets peak, then a good time to invest is…anytime. In fact, on a five year basis, the Nifty is almost never “negative” in returns if you just invest regularly: What we find is that the times when everyone is scared to invest is usually a good time to invest. This seems to be one of those times.

Breaking the rules: We have an interesting story that we added recently because we think it’s a jewel hiding in plain sight. LIC, that behemoth insurer, which listed in 2022, has only now discovered that there is such a thing called shareholder value. And they’ve found that if all they do is just follow the accounting rules that others follow – like taking profits that rightfully belong to shareholders which they have not taken – they can be one of the more profitable companies in India.

And they were the most profitable listed company in Q2, having found that they had the right to take nearly Rs. 5,000 cr. per quarter since January 2022, but for reasons unknown to humankind, they had not done so. Three quarters at one shot, and the Rs. 15,000 cr.+ profit was the biggest of any listed company in India. (Even the regular 5,000 cr. per quarter will keep it in the top 10) We made a podcast on it, and you’ll find it in your Surge India portfolio too.

Here’s wishing you all a very Happy and Prosperous 2023 in advance. We hope the Capitalmind Portfolios will go back to giving great returns even in the short term, as much as we’ve done in the longer term. I hope all of you prosper and find joy in the year ahead!