The rough end of the markets in September means we’re doing -3% for the month on the Nifty (Capitalmind active portfolios have done marginally better, though still negative). Our own portfolios have been this way:

Multicap has “outperformed” but a 0.8% absolute return in a year isn’t that great, honestly. Momentum and Market Index have had their rough seasons, as has the Nifty. We’ve had a lousy one year, for sure, and we are long-only so we don’t benefit from the markets falling. Longer term, we’ve delivered better returns but the true test will be to make it through this period and when equity returns get better, outperform in the short term as well.

We’re fund managers, so we’re optimists by nature. We have a “bullish” bias almost all the time. But if you ask me honestly, where would I have my money invested: my feeling more than any other time before would be –  Indian equities. (And I do, personally in the PMS) I fight my biases all the time, but the data seems too interestingly bullish to ignore, at least in the 5+ year horizon from here..

The Nifty is in fact the second best index (in local currency) compared to the UK FTSE, US S&P 500, Nasdaq 100, German DAX, Japanese Nikkei, or the Korean, Singapore or Hong Kong indexes. Only Indonesia does better: And then, the USDINR, which has now risen to Rs. 82, is also relatively better than even the Japanese, British and European currencies. What’s really happened? Does it matter to our stocks and market?

Why India seems to be better positioned

The answer is in two specific things:

India has great things going for it – and we’ll have more details for you over time, but here’s the gist:

If you combine the weaker situation in other countries with a relatively stable India, and with potential long term gains from a stronger infrastructure, it might just be the a great decade forward for India. We’re looking at companies in these spaces, and nearly 75% of the Long Term Multicap portfolio is related to them, and we’ll track these “maha” trends and work with participating in the larger story.

Meanwhile the situation in the world gets crazy. Interest rates rose rapidly in the US, Europe and the UK. So much that there has been panic at various levels. In the UK, long term rates hit 5%. That forced the Bank of England to jump in and buy bonds, exactly when they said they’ll sell bonds instead. Just to rescue pension funds that, apparently, found it appropriate to leverage themselves and could go bust with the higher rates. We’ll write more about this, but skeletons come out of financial closets only when interest rates are rising.

The war in Ukraine continues. Europe’s struggling on the energy front, as winter approaches. The Chinese situation is almost unknown – nothing seems to come out or go in, as they’ve enforced strong lockdowns and travel restrictions. Demand worldwide has slowed, which reflects in lower crude prices, wheat prices, palm oil prices and such. The world economy will slow down, and that has repercussions on all markets, including ours.

Our IT exporters might still do well, because they handle critical functions at relatively low costs. (Always, the highest cost non-critical items are cut first in a recession) But demand of all other things we export – chemicals, tyres, fertilizers etc. – will be hit as well. The solace, though, is that most of our companies have reduced their leverage and have the ability to live through a bad patch, and even thrive as some of their competition struggles.

It will pay now to stick with resilient companies and build a base for the longer term.

When do our stocks actually recover?

For all our “being better”, Indian markets are actually quite negative compared to fixed deposit returns in a one year time frame. Our performance too sucks in that one-year time frame, and we’re working hard to build portfolios that can do much better going forward. Times change, data changes and investing strategies must adapt as well.

In the end, the question is always: all this is ok, when will our portfolios recover? My answer to this is – I think we still have a rough year ahead in terms of market falls, but in a couple years, we should be back on a growth trajectory. Why do I say this?

Markets are slaves of liquidity. They don’t reflect fundamentals all the time. India did very well relative to the rest of the world in 2008, but still, our markets fell 60% when the world fell. (Our GDP grew 5%, everyone else was in negative territory). Markets in India are slightly less dependent on liquidity from abroad now, but if there is a world panic situation, we’ll still see dramatic moves on the downside. (And possibly, equally dramatic returns on the upside)

I’m positive about long term liquidity – foreign investors will do very well to invest in India compared to other countries simply because of our superior macro situation, our lower inflation, and our large domestic economy. (We aren’t only export focused) In the short term, however, some crazy pension fund in the UK will have overleveraged itself, which causes it to sell whatever it owns, and some Swiss bank will go bust, and some American hedge fund will own all of the above and sell whatever Indian stocks it owns just to compensate. That will hurt our markets in the short term.

Our job is to look long term, but we can’t ignore the short term – even a single year of low performance creates jitters, as we have noticed recently. We can’t stop the forces that shape markets, and we can’t even predict them. But we can put a process in place that says: this is how we will react when this happens, if this happens. This is what we do every day at Capitalmind, while keeping our focus on the long term where the real magic happens. Opportunities will come, and appear rapidly, in a time of crisis.

If you look at the period between 2019 and 2024, nominal growth of the economy should be around 12% on average. That would mean an absolute return of 76% is what you should get just by indexes alone. This translates to Nifty levels of 21,400. I’m not predicting that this is where we will be, but in a five year period, we should inch towards that number. From where we are today, that’s still only 13% a year for the next two years.. At Capitalmind we do want to beat this, so we’re looking for stocks in our portfolios, where growth can be much higher than 13% a year!

I’ll leave you with this. The world will be more depressing in the next few months. Markets will be shuttling between temporary panic and temporary euphoria. You’ll feel like the FD is a better place to be. But this is an amazing, solid place to build stock market positions for the next five years. If you don’t need the money in the next half-decade, now is the best time to stay invested or keep to your investing plan. (I won’t say “add more” only because I cringe at over-selling. I’m personally adding where I can, and our company now has half its net worth invested in the Capitalmind PMS)

Dussehra is here, already. It’s time for the good in us to triumph over all the bad. All of us at Capitalmind wish you all the very best for the holiday season ahead, and that the festive times will bring cheer to your wealth as well! 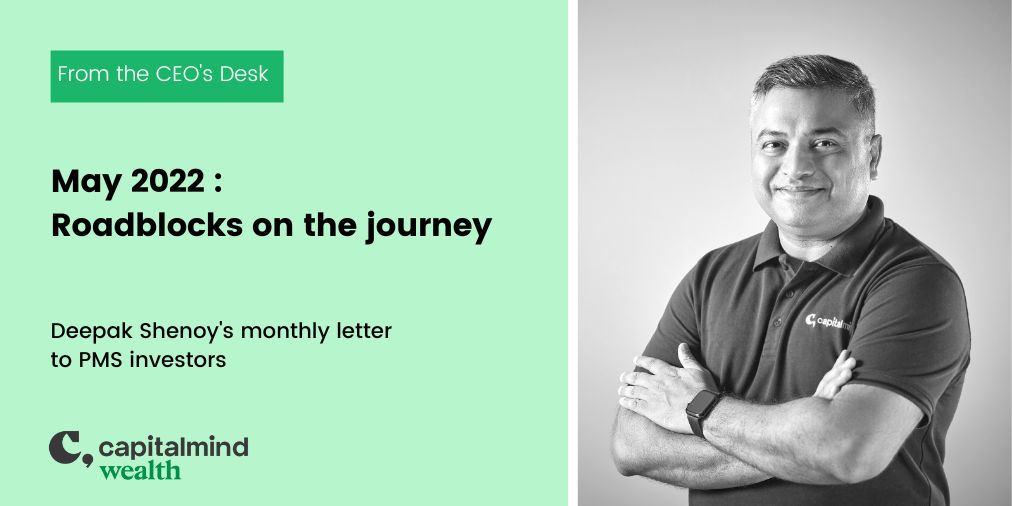