The latest to get whacked with the lightsaber called Leverage is Prannoy Roy of NDTV. On August 23, 2022, the past came back to haunt him in a way that seems to have outraged a whole lot of people.

NDTV has a takeover bid from Adani Enterprises, owned by Gautam Adani, known to be very close to the government in power, which NDTV has stood firmly against in its reporting coverage.

And yet, this is not worth the outrage. Roy had lost a significant chunk of his holding long back. He should have seen it coming because the seeds of the problem were planted in 2009, more than 13 years earlier.

Actually, the seeds of the problem started in 2007. Prannoy Roy had to buy out the stake of a Venture Capital firm, General Atlantic, which owned 7%+ of NDTV and then had to make an open offer for another 20% at Rs. 439 per share. This cost a truckload of money. The money was borrowed and was eventually owed to ICICI Bank.

Prannoy Roy and his wife, Radhika Roy, owned about 32% of NDTV. They owned a company together, named RRPR Holdings, from their initials. This company took the loans to buy the stake in 2007, and in 2009, ICICI wanted its money back.

The stock price, after the 2008 crisis, had crashed. It now traded at around Rs. 150, more than 60% below the open offer price. The shares weren’t worth the loan amount – so money had to be found. 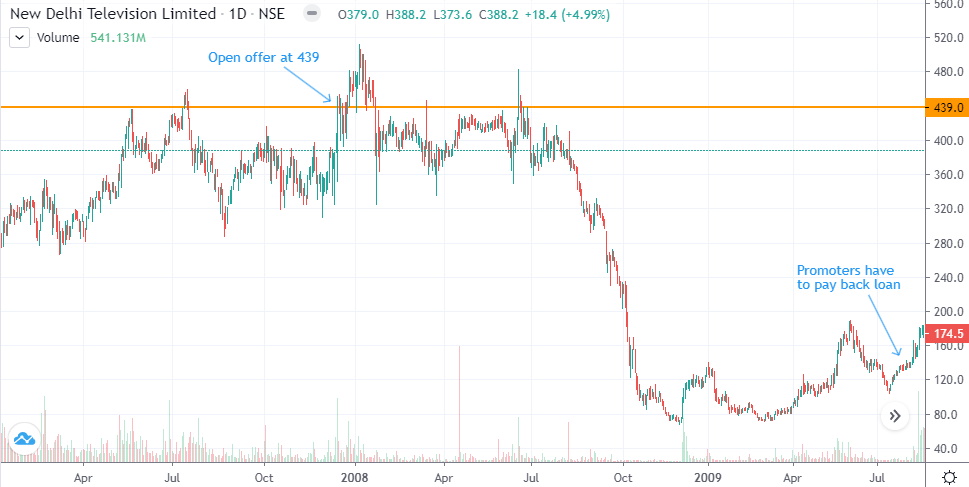 Enter the white knight in the form of Reliance Industries, controlled by Mukesh Ambani.

Strangely, says SEBI, in a ruling against VCPL in 2018:

Firstly, the loan was made without any interest and allowed VCPL to convert the warrants (given against the loan) to shares of RRPR Holdings, so much that VCPL would own RRPR nearly outright.

Who gives a loan with no interest? In effect, this was Reliance’s subsidiary, VCPL, owning the right to own RRPR (which in turn owned about 29% of NDTV) whenever they wanted. There was no interest because it was effectively a transfer of ownership of the promoter entity.

Note: that last bit where VCPL cannot purchase shares of NDTV directly without the consent of promoters – that could be what NDTV uses to get some wiggle room. But it depends entirely on how the clause is worded in the actual agreement and if there’s a termination date.

Note this carefully. In 2009, Prannoy and Radhika Roy had effectively sold 29% of NDTV to Reliance. They continued to own another 32%.

VCPL didn’t exercise their right to take over RRPR Holdings at all. In fact, VCPL itself was sold to a Reliance affiliate who, it turns out, has sold it to Adani Enterprises on August 23, 2022.

This is where the game gets tricky.

Adani, as the new owner of VCPL,  exercises the warrants (on 23 August itself) and therefore indirectly controls 29% of NDTV. With SEBI rules, VCPL now has to make an open offer for another 26% shares from the remaining shareholders. Effectively, the deal made in 2009 was that someone could “on-demand” take over 29% of NDTV.

That “on-demand” has happened now.

If the open offer has to succeed, people should be willing to sell their shares to Adani at 294. But why would they do that when the market price is 30% higher at 370?

The only explanation is: that Adani has no interest in buying any further stake in NDTV. The Rs. 294 is just the lowest price it can offer by SEBI rules.

This means Adani’s ownership might be limited to the 29% it effectively controls through RRPR.

Will Adani get control of NDTV? End of Independent Reporting?

If Adani Enterprises gets no shares from the open offer, they will own only 29% of the company. The Roys own 32% on their own. So technically, Adani can’t “take over” the company. If Adani wanted to take over, he’d have offered at least as much as the market price of the share, which he hasn’t.

Oh, and they might get another 9% from a friendly FII which owns that much of NDTV. That’s LTS investments, whose only other investments in India seem to be, er, Adani companies.

LTS Investment Fund is an FII

Even then, that’s only 39% with Adani. This won’t be a takeover just yet. You need 50% to effectively take over a company.

Without a takeover, the fears that NDTV will lose editorial independence are unfounded. Things will continue as usual, except for a few areas.

Adani can block a “special” resolution of any sort since they own more than 26%. This includes further equity fundraising and even reappointment of some directors so that the battles will be intense. Adani doesn’t have a member on the board (and isn’t going to get one unless they get to 51%, I think).

Isn’t this unfair? Has this ever happened?

Bro. Please. Let me sit you down and explain: This has been happening to many companies over the last decade. Let’s take the cases.

Case 1: A promoter of a large media enterprise borrows too much money and can’t repay it. The people who lend him the money take over his shares and sell them in the market. The media promoter has almost no stake left and humbly agrees to merge his company with another media giant.

What was this? Not NDTV. It was Subhash Chandra’s Zee TV, where he first lost the shares he’d pledged for his loans. And when lenders sold those shares, he was left with just 4% of the company. Zee will soon merge with Sony. Chandra’s family is lucky to stay at the helm for now.

Read The risk of leverage with Zee TV.

Case 2: A promoter of a large media enterprise borrows too much money and can’t repay it. He takes a loan from Reliance Industries, with an option that allows them to buy out his promoter company whenever they want. They decided to ‘want’ it in 2014, and boom, the promoter loses his company.

What was this? Not NDTV again. It was Raghav Bahl’s Network 18, which Reliance now owns. Because the promoter needed money at some point and did the same thing NDTV did – sold his promoter company to Reliance through an exercisable option.

Read: Why did Reliance buy Network 18 when it already owned Network 18?

What’s common among all these and NDTV? The first sentence:

“A promoter of a large media enterprise borrows too much money and can’t repay it.”

The road to promoter hell is paved with the loans they take that they can’t repay. The simple answer is: don’t do it. We learn this very quickly in the real world because if you do it, they make nasty calls to you all times of day. Media, though, are on the “experienced” side of nasty. The media barons, however, seem to have over-leverage as if it’s a contagious disease.

No one makes money on this deal, but NDTV stock is zooming

VCPL gave a loan for Rs. 350 cr. (and added another 50 later to make it 400). Effectively, VCPL gets shares worth just 50% more in 13 years, which you could have gotten in a savings bank account.

Shareholders are now seeing the stock price return to 400, which is still lower than the highs of 2007-08. The open offer, though, is at 294. There’s no money to be made in the open offer itself.

NDTV’s shareholders, though, might be happy because a fight for the company could help the stock price. The stock itself is up over 100% in the last month alone! 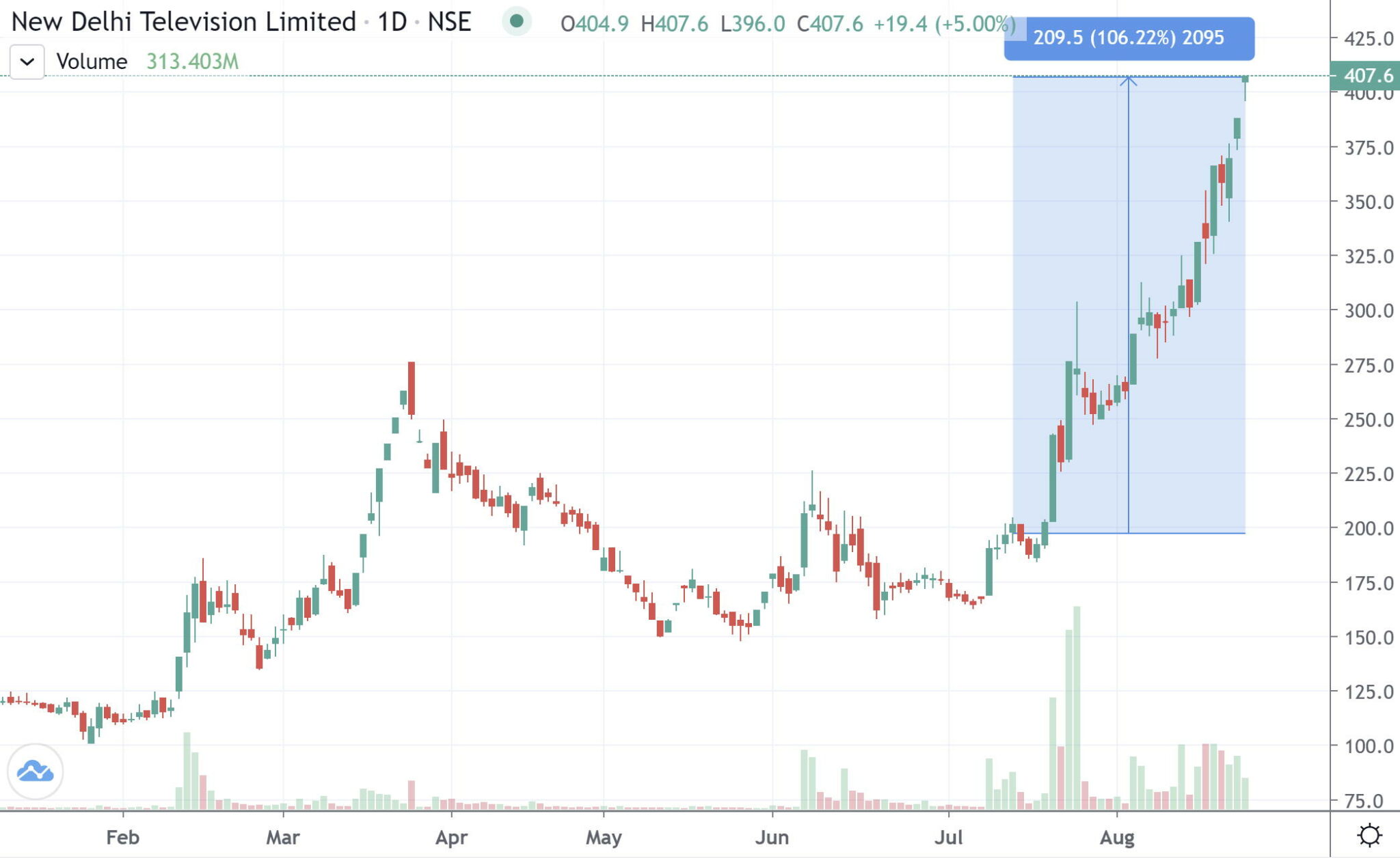 Also, the company itself is profitable. They’ve gone from massive losses to a net profit of 80+ cr per year. For that, the current valuation of around 2,600 cr. looks reasonable, with the return on equity at 40%+.

We should expect that the Roys will eventually have to give up RRPR. The 29% it holds will slither away into the hands of Adani, who gets veto rights for any significant changes that NDTV might have to make. Even then, the Roys own 32%, and Adani, even with friendly FIIs, will own 40% or so.

Adani doesn’t get to own 50% just yet. And if he does, it will have to be through other open offers. The price of Rs. 400 a share will probably see very different numbers – both up and down – as the battle progresses.

There’s no change in editorial control unless Adani gets to 50%. In fact, at this time, it makes even more commercial sense for NDTV to increase its tempo on their critical coverage of the government.

Personally, I don’t think there’s a grand moral standing for NDTV at all. It’s not like someone washed this TV channel with milk – they have solid political connections and have used them to their advantage in the past. (Read: NDTV accused of laundering 5000 cr. and harassing tax officers) Everyone in the media is biased, and some for economic reasons.

Don’t expect the Roys to give up easy, even in their 70s. They’ll fight this, even on the strangest technicality. The latest salvo is: Oh, we got indicted for insider trading, so we can’t let you take over VCPL because SEBI said don’t do anything for two years. It’ll get ugly. 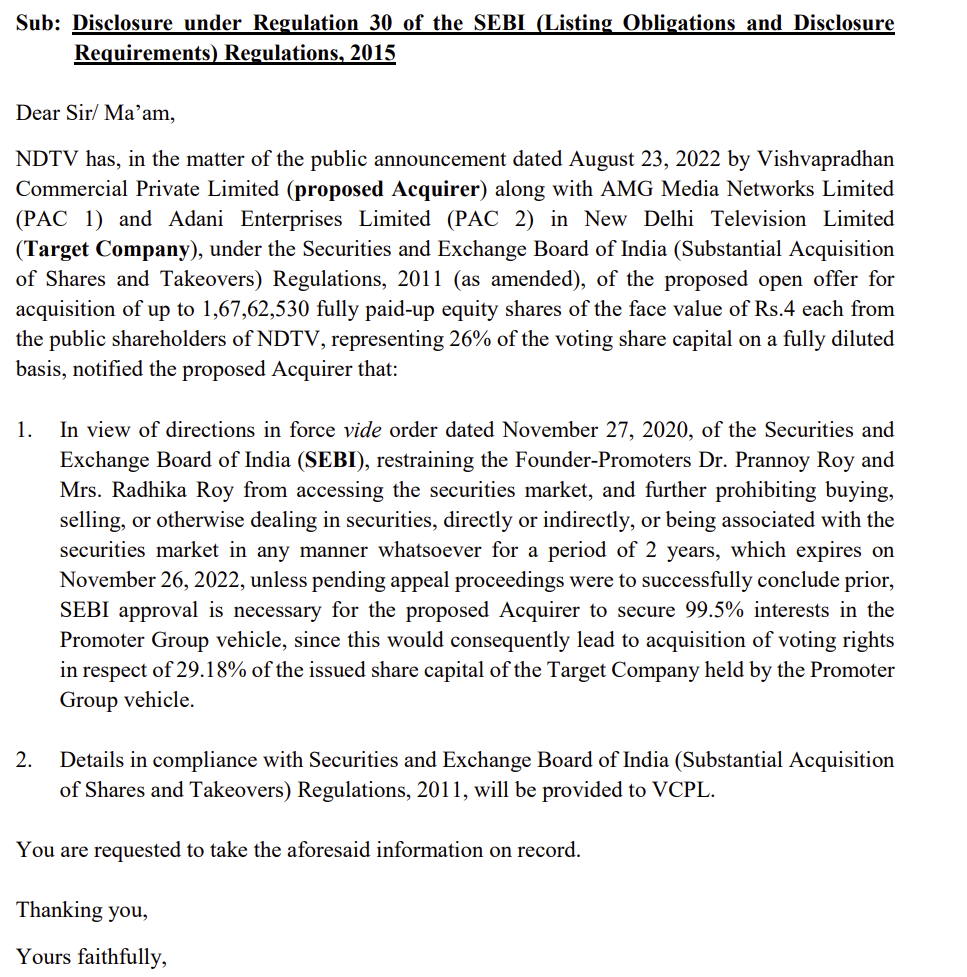 In the near term, don’t expect anything to change from an editorial perspective. It’s a profitable company, so it might not need to raise more equity while the battles rage on in the courts.

Is this a hostile takeover?

A takeover means Adani should have 50% of NDTV or want to own that much. He owns 29% and has offered to buy more at a price that’s Rs. 80 lower than the current market price. There’s no inclination to take it over just yet. So, no takeover.

Is it hostile? Prannoy Roy sold his ownership in RRPR back in 2009. Knowingly and willingly, to get money to pay back his massive loans. All that’s happened now is that the “sale” is actually complete, only that the owner is Adani. After you sell your house, you don’t get to outrage about who lives in it.

In corporate terms, this is not hostile nor a takeover. There could be one in the future, but that will be a Netflix series, so let us wait for the surprises.

There’s an ELI5 (Explain Like I’m 5) way to understand the NDTV situation:

You: If you give me cake today, I’ll let you have my car whenever you want, no questions asked.
I give you cake
13 years later, I ask for car
You: Hostile takeover!

The short lesson: Don’t borrow your ass off.

Business Wars: Six lessons from the most iconic business duels in history

Looking for the best smallcase to invest in? Make sure you consider these five things