This is a guest post written by Vineet Kulkarni. Vineet writes about businesses, investment opportunities, and personal finance. In addition to opportunities in India, Vineet also covers and writes about global equities. He aims to make investing easier with his writing so that retail investors can make informed decisions.

The much-hyped 5G spectrum auction is finally seeing the light of the day. Later this month (from July 26), the government will conduct the 5G spectrum auctions. While the leading telecom players – Bharti Airtel and Reliance Jio – gear up and strategize on which circles to bid for, Vodafone Idea seems to have been left behind. The company is still busy securing funds for the auctions. Read our post on What does 5G do for India?

Vodafone-Idea and its shareholders just cannot seem to catch a break. First, it was the retrospective taxation case in 2007 regarding the controlling stake in Hutchison Essar. To add to its woes, the decade-long adjusted gross revenue liabilities repayment case still haunts India’s third-largest telecom operator. Even after some respite on the AGR dues front, Vodafone Idea still tackles a steeper challenge—a chronic funding crunch.

Regulatory tweaks ahead of the 5G spectrum auction

Spectrum auctions have almost always been notoriously eventful in India. Sky-high prices and stiff repayment conditions have been significant challenges for telecom players.

However, this time, things are a tad different. The DoT (Department of Telecommunications) has tweaked some spectrum auction terms in favour of companies.

So, there will be no upfront payment, and the regulator has dropped spectrum usage charges (SUCs). The regulator has also cut the reserve price for specific bands by ~40% after operator requests.

Earlier, companies had to shell out 50% of the bid price at the time of auctions, and the rest had to pay in equally divided instalments till the period of usage. Telecom companies paid around 3% of their adjusted gross revenues as SUCs last year. The abandonment of SUCs will be a breather for cash-strapped Vi. However, Reliance Jio and Bharti Airtel will likely use these savings as growth capital.

The regulator announced a relief package last year to ease the dues burden of the Indian telecom sector. Companies were allowed to take a four-year moratorium for the October 2021-September 2025 period to pay the statutory dues with an option for converting deferred payments to equity. The debt-laden Vodafone Idea was the first one to opt for the facility.

The government will bear the accrued interest on its four-year deferral of spectrum charges and AGR dues of Rs161 billion. After converting this amount to equity, Vodafone will still have nearly Rs.1,890 billion in total debt. So, though the arrangement might give some headroom for Vi in the short term, it does not make its long-term road less barbed. 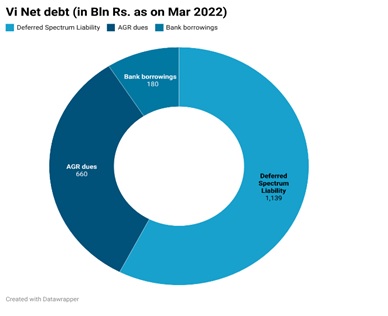 After the interest component gets converted to equity, the government will hold around 33% of Vodafone Idea, and promoters Vodafone UK plc and Aditya Birla Group will collectively own 50%.

However, the government will not have bo­ard representation and will not interfere in the company’s operations. In the past, we have witnessed the fate of government-run telecom companies such as BSNL and MTNL.

Interestingly, Vi may find it a bit easy to raise its long-pending funding target of Rs.250 billion with the government coming on board. Of this, 20% has been contributed by promoters; Vodafone PLC and the Aditya Birla Group recently. However, the balance of ₹ 200 billion is expected to be raised via a combination of debt and equity. Notably, the recent fund infusion from promotors highlights their commitment to the embattled company, contrary to the common belief that they wanted to wash their hand off.

So, with new fund-raising exercises and new owners coming on board, existing shareholders will have to encounter significant equity dilution. Even if there is a lock-in period during which the government isn’t allowed to sell its stake, the ownership of existing shareholders will decline notably. Interestingly, Vodafone UK and the Aditya Birla Group recently infused nearly ₹ 45 billion in fresh capital. But their stake in the company is about to fall from 75% to 50%. 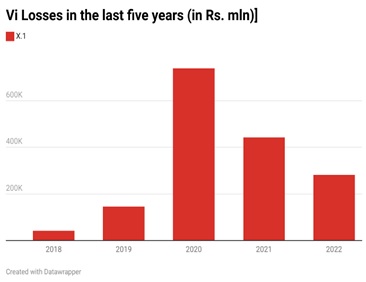 In fact, equity dilution has been a point of concern for Vi shareholders for a long time. At the end of the fiscal year 2019, the total outstanding shares in Vi were 6.9 billion. That figure is now 32.1 billion at the end of FY2022. So, the operating profit has declined from Rs. 5.4 per share in 2019 to Rs. 5.0 per share in 2022, although EBITDA more than quadrupled over this period.

Capex plans are weak on a relative basis

Vi’s Capex was a quarter or a fifth of Airtel’s in the last two years.

Vi has been squeezed between its dwindling cash flow from operations and steep outflows like statutory dues and Capex for years. It’s old news that Reliance Jio is well-placed on the financial front ahead of the 5G auctions. It has significantly upped its Capex game in the last two years. Bharti Airtel, too, is relatively on a solid footing.

At the same time, Vi is undoubtedly among the most vulnerable in the group. Thus, it has to fast-track the stake sale to the government to avail fresh funding. Also, desperate times might force Vodafone Idea to secure new financing at displeasing terms.

Even if Vi manages to raise the targeted capital, it still has towering liabilities worth ₹ 81.6 billion to be repaid in the next 12 months.

Thus, capital constraints might force Vi to bid for not-so-hot circles in the upcoming 5G auctions. The top two players will likely take a more aggressive stance due to their deep pockets and will dominate the auctions.

It’s all about money!

With their grander financial capabilities, we may see a faster, superior 5G rollout from Reliance Jio and Airtel. The subscriber base shift that we have been seeing from Vodafone Idea to the top two over the last few quarters should gain pace as 5G becomes more commonplace. 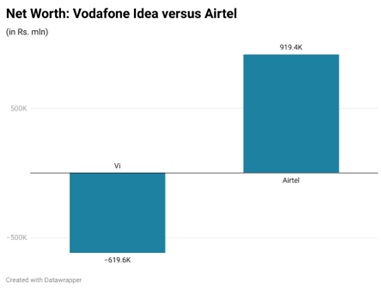 What could change Vi’s prospects?

Despite many dire predictions, Vodafone Idea still has some rays of hope. If it secures the necessary funding in time, it will still prioritize the top circles to bid for. Premiumization of its subscriber base – customers shifting from 2G to 4G – also has been quite fruitful on the top-line front over the last few quarters. Apart from that, a potential tariff hike should also help its revenues. In the previous two quarters, Vodafone Idea’s ARPU (average revenue per user) has grown 16%, thanks to a tariff hike that came in November last year. 4G subscribers have risen from 113.9 million as of Q4FY21 to 118.1 million in Q4FY22. If the trend sustains, ARPUs may inch up.

Vodafone Idea has been stuck with the ‘bad’ auction timing. It faces a big funding squeeze when the industry is ready for a paradigm shift. The long-term road for India’s third-largest telecom player still looks hazy. The current situation seems poised for industry leaders to become more dominant, and that too, at the cost of Vi.

June 2020: Can Vodafone survive with a favourable AGR ruling?

This article is for information only and should not be considered a recommendation to buy or sell any stock.