The internationalization of the rupee gets a major kick. We can denominate trade in Indian Rupees (INR) rather than in USD or EUR, with the RBI freeing up rules in our banking system. Even if probably designed to help us trade with Russia, the change has much greater ramifications. Read on.

The RBI has allowed international trade to be settled in INR. In the Indian Rupee. Meaning, if someone in another country wants, it can choose to pay us in INR and take our goods or services (paying for exports). And conversely, we could pay in INR for goods or services we import. This is a game changer.

How will the INR Rupee Based Trade Work?

Currently, when you trade in USD, even with Sri Lanka, the transaction happens in US banks. Why? because USD can only be held in a US bank. Every bank in the world (ok, almost every ) has accounts in US banks, and they just transfer money between each of those accounts when a trade settlement happens.

Think of the same thing in India. Assume that all banks in the world created accounts with Indian banks. Then, when someone wants to transact in rupees, they contact their bank in whichever country they are in, and say, “Take my local currency, convert to rupees, and give rupees to Deepak, through Deepak’s bank”. This allows Deepak to export services or goods and receive money in INR (which is what he has to pay his kids’ school fees with. INR. )

Here’s a specific example. The idea is that a Russian bank can have a “Vostro” account in an Indian bank. (it’s just a bank account with a fancy french name which is thankfully pronounced like it’s spelt. Update: turns out it’s Latin, not French. I should keep my quips to myself.) Since the account is in an Indian bank, the account is denominated in rupees.

Assume an Indian refiner wants to import crude from a Russian company.

Simple enough? But you’re thinking, wait, how does the Russian bank “give” RUB? It only has INR! You have to understand this: Banks print money. The Russian bank can say I now have 100 million INR in my account in the Indian bank. Against that, I can print 50 million RUB. And give that to the crude oil co.

What can the Russian bank do with the INR? Here’s one thing. Let’s say a Russian medicine chain needs to import medicines from India.

Here’s a rough depiction of this process: 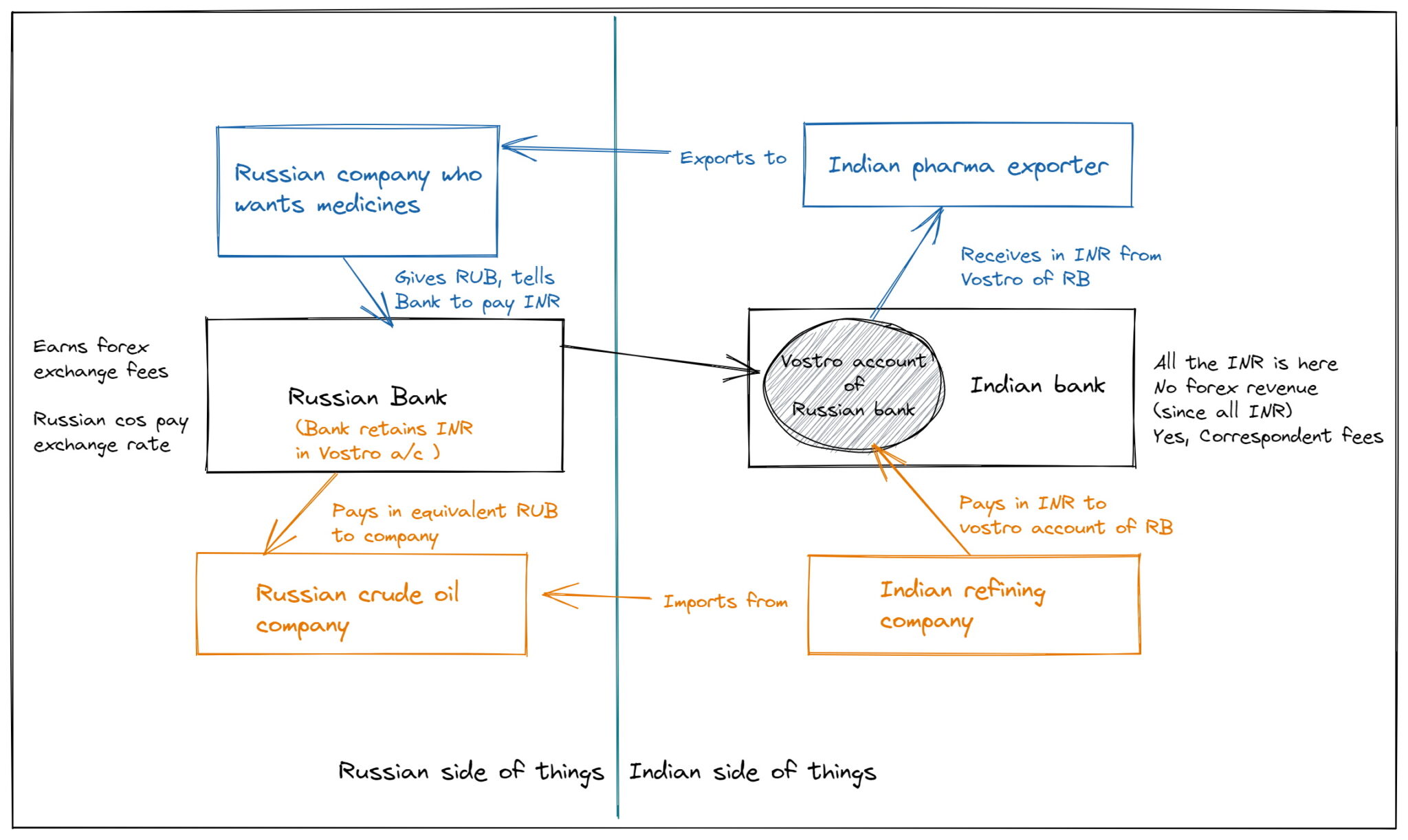 What if there’s an excess rupee balance?

India imports more than it exports to Russia, so if all trade goes this way, the Russian banks will have an excess INR balance.

Then, the Russian banks can choose one of two things:

Currently, the rules don’t seem to allow (1) above, but that might change very soon.

Is this only for Russia?

No. The rules are broader, but before that: Why was this not possible earlier?

This was a pain because no one liked to deal with the rupee earlier and the RBI didn’t allow such things. They wanted dollars if you traded abroad. Because hell, we should have forex reserves no? But that’s short-sighted, because if we can use the rupee to trade, then we could technically finance our trade deficit using rupees, not dollars (and thus, won’t import inflation through currency depreciation). I say technically because a lot of complicated things happen and life isn’t so simple, but even in the most complex of arguments, it’s better for India to trade using the rupee. Still, that’s a digression.

Everyone was happy with dollars as a currency of trade. Until the Euro came along, and then people would mark trades in Euros. And British pounds. And Yen. These were fine as they were internationally accepted and they all had the ability for foreign banks to open vostro accounts in each country and thus settle trades.

But something changed, very recently. Now consider that most trade happens in EUR and USD. That means every country’s banks have vostro accounts in a European or American bank. Russian banks too, did. And then Russia invaded Ukraine. This ticked off the west.

America froze all payments in USD and kicked Russian banks out of the SWIFT system, which facilitates trade in USD (and other western currencies). This technically meant that if a Russian bank had USD in their vostro account, they couldn’t use it to pay for an import or such, even if it was to pay India! The same thing was done by the EU, so the EUR balances were frozen. Russia was blocked out of trading with US and European companies anyhow, so that was fine. But since the used the USD to trade with other countries like India too, they couldn’t pay or get paid by India in USD. Because the Russian vostro’s in US banks were frozen.

This was a silly move, because it undermined the core basis of world trade, which is “Thou shalt not freeze my vostro account”.

Russia and India need to trade anyhow. Heck, Russia’s still trading with the US and EU, who have carved out exceptions like “okay, we’ll die without Russian gas, so we can allow Gazprombank’s vostro to be operational”. Russia responded with “Hello uncles. Please pay in rubles. You don’t get to keep our money.” Which is currently a massive ego problem but we are only popcorn eaters on the sidelines, for now, so let’s focus on the INR trade thingy.

So Russia can now trade with India in Rupees if they use this arrangement. India will have a similar arrangement with Russian banks in case we ever need to use RUB as the trade currency. Typically, you denominate trade in the currency of the importer, because one country can provide goods, the other has to provide the currency. (Econ theorists: I know it’s more complicated. But please let hair down for one day.) India would do well if we were able to denominate our trade with Russia in INR.

Read more: The opportunity for India in the changing world order.

India’s already signed deals with the UAE for rupee based trade (link) but the RBI didn’t have clear rules to support this. Iran too has been looking to export to India using the Rupee. Venezuela has expressed interest.

There will be more if:

Will this help the INR?

Currently, in the short term, it will allow Indian companies to import from Russia. What should happen is the the INR should truly be a floating currency and tradeable worldwide, for this measure to really take effect.

It will help the INR against the USD because we don’t need so much USD for our imports if Russia, Iran, UAE, Venezuela etc. were to trade with us in INR. That will reduce the pressure on the exchange rate.

Expect, however, that the US will not be happy about this and could counter with their own versions of sanctions. But considering that they haven’t yet done this to China, which continues to trade with Russia, any sanction attempt will be ineffective and counterproductive.

What it could help, if it succeeds, is to bring more buyers of government bonds and T-Bills. Which can help reduce our interest rates in the longer term. But for that, we need to truly internationalize the rupee. I think it’s a good first step.