Why are mutual fund managers sulking? Asset Management Companies, or AMCs, have seen their stock prices battered recently. If India is investing, and mutual fund sahi hai, then what ails the business of an AMC? Let’s explore.

Dig deeper, and many negatives related to the listed players come out. All the four are among the top 10 players in the industry, but have been growing their assets at a much slower pace than peers or the overall industry. Not surprisingly, they have also lost market share to players such as Kotak, Axis and Mirae, or even the older pack such as SBI and ICICI Prudential. Yields (ratio of revenues to AUM) have declined. Along with falling TER (total expense ratios) as asset sizes grow and increasing interest in passive funds, it becomes clear why these players aren’t market favourites. 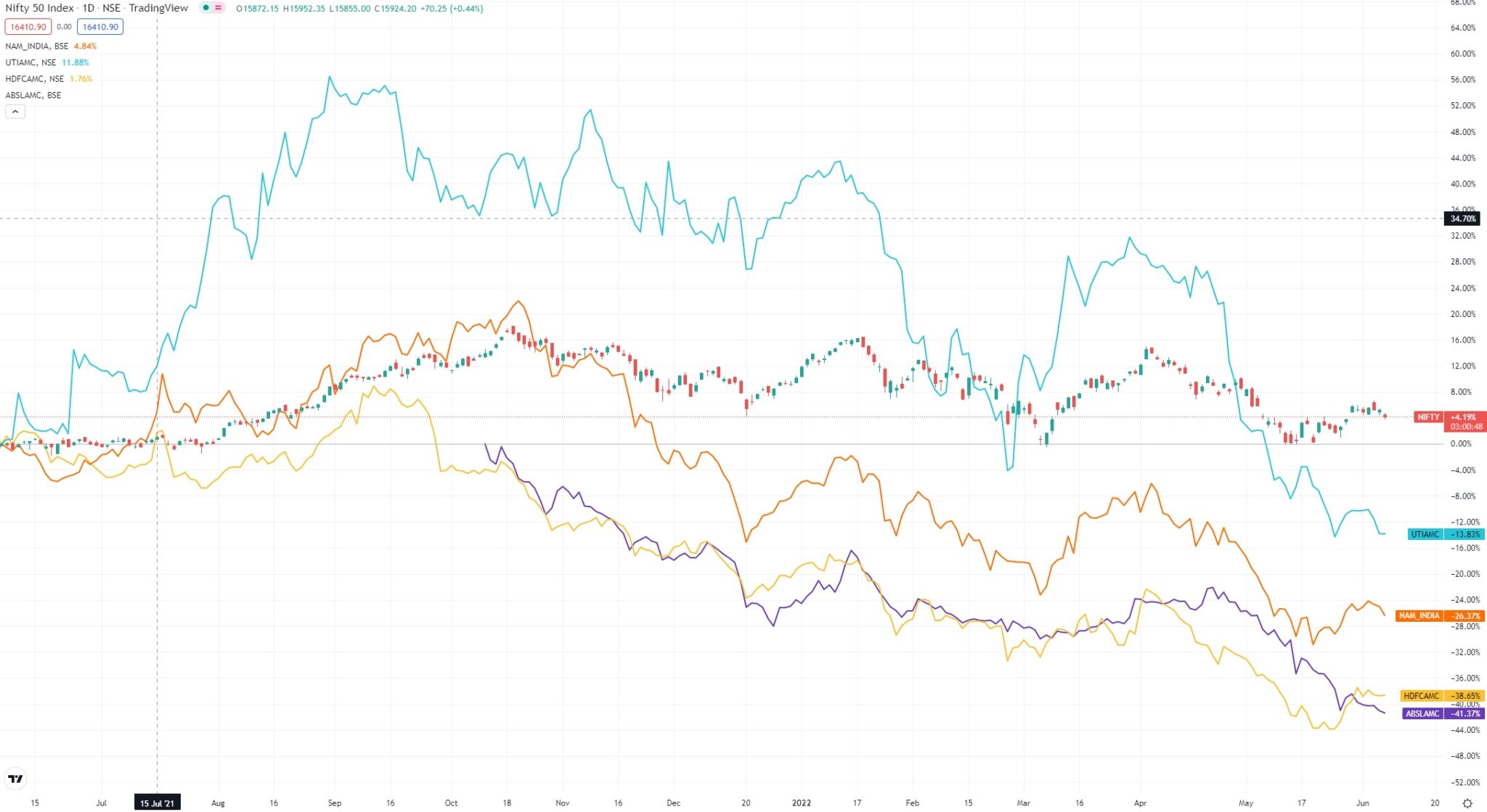 Here is a detailed take on how these factors are hurting the AMCs.

The AMC industry : A Quick Overview

Asset management companies are licensed by SEBI to allow investors to pool money and buy stocks, bonds or other securities. They operate in a highly regulated environment. Over the past decade, markets regulator SEBI has introduced numerous guidelines and rules on banning entry loads on mutual funds, reducing distributor commissions and total expense ratios, and regulating where schemes can invest via categorization.

Mutual fund houses largely get their revenues from management fees collected for running their schemes. Apart from those, AMCs invest in their own funds so there are gains made from investments, dividend income etc. Fund houses could charge nearly 3% as management fees on some schemes earlier on. But over the past 3-4 years, with successive regulations, SEBI has reduced the Total Expense Ratio (TER) for mutual funds. As AUMs rise, fund houses are expected to reduce their TER. This starts from Rs 500 crore and goes all the way up to Rs 50,000 crore plus. From 2.25%, the TER comes down to 1.05 % for schemes that have assets in excess of Rs 50,000 crore.

Employees in a mutual fund also have to compulsorily invest in the units of schemes of their own AMC. In fact, SEBI mandates investing 20% of employees’ salary in own mutual fund units, that too with a lock-in period. Even the non-investment staff have been forced to take up this compensation structure.

In October 2017, SEBI also introduced rigid categorization for equity, debt and hybrid funds. And the regulator also made it clear that every AMC could have only fund in each category. Because of the numerous new categories that were launched, fund houses launched many NFOs over the past couple of years.

AMCs are also allowed to have portfolio management services (PMS) and manage funds of provident funds and pension funds. With EPFO (employees provident fund organization) now allowing PF investments to the tune of 15% of the overall corpus into equities, there is scope for large amounts flowing into mutual fund houses. SBI, UTI and LIC already manage the compulsory NPS scheme for government employees.

SEBI had come out with new categorization norms for mutual funds in October 2017. Fund houses changed scheme names and shuffled portfolios over the next few months. By mid-2018, most fund houses had repositioned themselves. Therefore, the AUM growth from FY19 is taken for reference.

But the assets of AMCs of UTI, HDFC, Aditya Birla and Nippon grew at a the rate of around 6-12% annually, a good 4-10 percentage points slower than the industry’s pace.

The other key metric – yields, measured as a ratio of revenue to assets under management – has also declined for the listed players.

Yields have declined by 7-17 basis points over the past three years, with Nippon India Life AMC facing the steepest fall.

The top asset management companies generally made healthy margins, thanks to their relatively fewer number of cost heads. Employee expenses and fees & commissions were the key components. Now, AMCs were absorbing some of the costs that were to be attributed to individual schemes. This absorption of marketing and distribution costs was considered as a factor that would distort the total expense ratio (TER) of funds.

In October 2018, SEBI mandated that all scheme-related expenses must be paid by the scheme itself and that an AMC could not absorb them.

If a fund paid Rs. 200 cr. to the AMC for management fees, earlier the AMC would pay out Rs. 100 cr. as commissions to distributors from this fee. Now it’s taken out from the fund itself, so what the AMC gets is only its fees. Effectively from a 40% margin business (where 50% of revenues went to distributors) this grew to an 80% margin business.

In the absence of such costs, the net margins of fund houses soared further. For example, in FY19, Nippon Life AMC had over Rs 258 crore as fee & commission expenses, which were reduced to Rs 70.5 crore in FY20.  ICICI Prudential AMC witnessed a decline of 67% in its ‘fund expense, brokerage & incentive ‘cost head to Rs 126 core in FY20 from Rs 386 crore in FY20.

Aditya Birla Sun Life AMC had Rs 317 crore as fund & marketing expenses in FY19, which more than halved to Rs 152 crore in FY20.

Over the past couple of years, these costs have generally tended to decrease further, occasionally going up in quarters where NFOs (new fund offers) are launched.

But these are small cost heads now for the fund houses. Therefore, margins have risen over the past few years.

How financials and valuations played out

It is clear that the growth in AUM hasn’t translated into revenues for these companies.

But given that other than employee expenses – the largest cost component – the other costs are meagre, all the four listed AMC have had reasonably good growth in net profits.

Costs for these AMCs have more or less been on a declining trend.

HDFC, Aditya Birla Sun Life and Nippon Life AMCs have seen profits grow by 14.4-15.3% annually over the past three fiscals. From the unlisted space, ICICI Prudential AMC saw a 28.4% CAGR in net profits over the three years.

The earliest listed AMCs – HDFC and Nippon Life – used to trade at price earnings multiples of 40-50 times a couple of years back. They now trade at 25-28 times trailing earnings.

Thus, there has been a clear de-rating in these stocks as a result of a combination of loss of market share, yields, slowing revenues and so on.

As the table above indicates, apart from price-earnings multiples, even on the popular metric of market capitalization to AUM, these AMC stocks have been given a thumbs down by the market, with a steep decline in the ratio for all players.

On a relative basis, Blackrock in the US has a market capitalization of $102.6 billion and assets of $10 trillion (as of Jan 2022). Despite such a mammoth scale the stock trades at 1% of its AUM. (This is largely because it’s AUM is largely passive funds, so earnings are lower, but it’s still a big difference)

As described earlier, all listed AMCs enjoy fairly high margins. But high profits have not meant much for shareholders. Dividend yields for these stocks are in the range of 2-4% at current market prices, which seem attractive. But there has been a 30-40% share price erosion accompanying the payouts.

AMCs have another problem: they don’t need money to grow. So the cash flows cannot be compounded, since it cannot be reinvested back into the business. So, they must pay out most of what they earn. Except Nippon Life AMC, others have still held back a bit on dividend payouts to shareholders.

For HDFC and Aditya Birla Sun Life AMCs, the underperformance of their equity funds has been a matter of concern. A cursory glance at Valueresearch data on fund returns reveals that most of their active equity funds have been in the bottom half or even bottom quartile of returns over three and five-year periods.

Nippon has a few categories where returns are in the top quartile, while UTI has done better on this count. This is another point of concern.

In light of the underperformance of active funds vis-à-vis their benchmarks, especially among large-caps, investors have tended to prefer passive funds and ETFs as their investment vehicles. And passive funds charge lower fees, which in turn may hurt revenues for fund houses.

With TER pressure and intensifying competition, it remains to be seen if domestic AMCs find investor interest again.

Time for banking stocks to make a comeback? [Premium]

Disclosure: No invested interest in these companies. Capitalmind, as Wizemarkets Analytics Pvt. Ltd, has also applied for an AMC license with SEBI.