2017: The CEO had resigned. The stock had fallen 50%. Investors were worried about growth prospects. Historically, the promoters had relied on professional managers to run the company. At this critical juncture, Jubilant Foods found the man who would pull it out of the rut. A top-tier MBA, an ex-HUL executive with solid business acumen – Pratik Pota.

And Jubilant Foodworks now faces the same challenges it did years back. Pratik Pota has resigned. The stock is down 50%. The company brought in Sameer Khetarpal, ISB alumni and an ex-HUL guy, as the new MD & CEO. Too many similarities. Yet, the investors of Jubilant Foodworks will hope he would do a repeat of the revival act.

When Pratik Pota joined in 2017, Jubilant Food stock, backed by a business turnaround, went up 7x. Will it deliver this time as well? How different was the company then & now? What should investors expect in the next five years? We try to answer some of these questions in this post.

JFL, incorporated in 1995, holds the master franchise rights for three major US food brands – Domino’s Pizza, Dunkin Donuts and Popeyes (recently added) – in India, Sri Lanka & Nepal.Domino’s opened its first outlet in 1996 in Delhi. The company is the largest franchisee for Domino’s brand outside the US. It operates 1,567 Domino’s restaurants across 337 cities in India.

Pizza as a dish made its first appearance in India during the 1970s. However, it became mainstream in 1996 when two international pizza chains, Domino’s and Pizza Hut, opened their first store in Delhi and Bangalore. Dominos India went on to become the market leader in its segment of operation. It captured 23% of India’s QSR market (in terms of revenue), while Pizza Hut had to settle for a mere 4%.

The company went for its IPO in early 2010 and raised ₹ 300 crores. It had a bumper listing as investors lapped up the shares of India’s first listed QSR (quick-service restaurant) player. The company had 286 stores and was valued at ₹ 1,456 crores. At the same time, Dominos Pizzas Inc, with 8,000 stores, was trading at ~ ₹ 3,000 crore market cap.

It was a phenomenal decade for the company. Ajay Kaul was appointed as the CEO in 2005. The company went aggressive for the first time since its inception. Revenues expanded at 36% CAGR (compounded annual growth rate). The number of stores increased from 128 to 989, a CAGR of 23%. Net Profit went up 55x from Rs 2 crore to Rs 111 crore. And more importantly, this expansion was financed by internal accruals and not with debt. The total debt on the books went from Rs 27 crore in 2005 to Zero in 2015. It grew not by capturing the market but by creating it.

In 2007, the company launched the 30 min delivery or free campaign that not only changed its growth trajectory but pioneered the market for food delivery in India. It was a masterstroke at that time. Management said it was not a marketing gimmick but a push towards operational excellence. The company estimated the time for all the activities from receiving the order, preparation & delivery.

Each store caters to an 8km delivery radius. As an order comes in, it takes:

It also leaves a buffer of 7 min for unexpected traffic. The company had pulled this off with an impressive success rate of 99.6%. 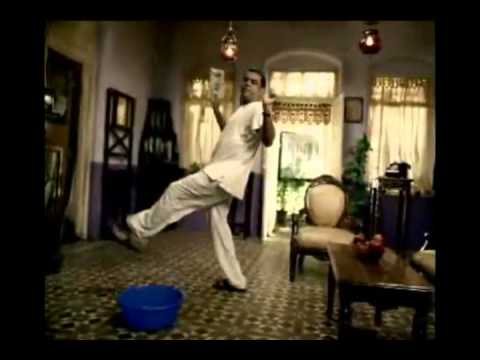 The success streak came to an end. JFL became the victim of its success. The aggressive growth in the earlier years hurt the company’s Same-Store Sales Growth (SSSG) metric.

SSSG is a financial metric that differentiates revenue growth from existing stores vis-à-vis new ones. A high SSSG indicates that the company can generate increased revenue from existing stores, which is more fruitful than deploying capex to open a new store.

The SSSG, 37% in 2011, had fallen to -7.5% in 2016. During the same time, EBITDA Margins shrunk by half from 18% to 9.5%, and PAT margins dropped sharply from 10.5% to 4%. The reasons were many for such an abysmal performance: higher COGS (cost of goods sold), expensive rentals, competition in Tier 1 cities and ballooning losses of Dunkin Donuts.

Jubilant opened its first store of Dunkin Donuts in 2012 but never really took off. Over the next four years, the company opened 71 Dunkin Donuts stores across malls & Tier 1 cities. The brand reported a loss of ~Rs 25 crore every year for the company, which exerted pressure on its cost structure and margins. To worsen the situation, the then CEO Ajay Kaul and CFO Ravi Gupta resigned from the company in Sep and  July of 2016, respectively.

Turnaround 1.0: The All New Domino’s

Mr Pratik Pota joined Jubilant Foodworks as CEO in Apr 2017, and he started to deliver from the word go. His plan was simple. He wants to get the fundamentals right and give the customers what they want. Mr Pota focused on four core principles to get the JFL back on track. The changes are small to start with, but they made an impact.

Of course, it wasn’t a smooth ride for JFL then. In Apr 2018, Dominos India faced allegations over a fake cheese video that went viral on social media. It was a major trust issue for Dominos as a brand. It was later found that the allegations were false and the video was fake.

In Feb 2019, the promoters group proposed that JFL pay 0.25% of the sales as royalty to use the brand Jubilant. It is like saying, people are buying pizzas because of the Jubilant brand and not for Dominos brand. Investors got spooked by the news bringing the stock down by -7% on the same day. The promoters withdrew their proposal a day later, but the damage was done.

Is Turnaround 2.0 on the cards?

Pratik Pota announced his resignation, and Sameer Khetarpal will be the company’s new CEO from Sep 2022. Historically bringing a new CEO has worked for the company.

But things aren’t looking so straightforward for Sameer Khetarpal. To understand, let’s compare the starting points of each of these scenarios (2016 and 2022). 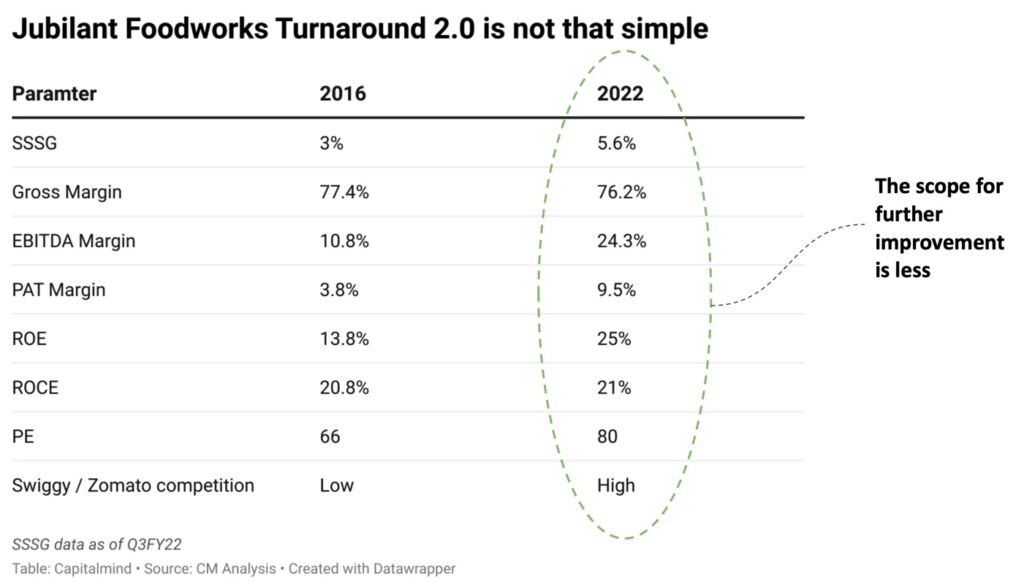 In 2016, things were outright bad. The numbers were at a decadal low (SSSG, Margins, return ratios etc.). There was a lot of scope for operational efficiency. But it isn’t the case now. Things are much better now in all possible ways.

The problem then was to get revenue growth and improve operating efficiency. But now, the challenge is to generate revenue growth on a higher base amidst stiff competition.

In other words, Pratik Pota knew where to strike the hammer while fixing the ship, whereas Sameer is yet to identify the leak.

Is JUBLFOOD a good buy now?

The next leg of growth for JFL will come from its new initiatives such as Hong’s Kitchen, Ekdum, and Popeyes. The management has guided the opening of 250 new Domino’s outlets in FY23, which is encouraging.

The company recently bought a 50% stake in DP Eurasia (Dominos Pizza franchise in Russia, Turkey, Azerbaijan, and Georgia). DP Eurasia currently runs 188 stores in Russia and 621 in Turkey and two other countries.

Jubilant Foodworks has been a part of the high valuation / BAAP (buy at any price) pack for some time now. This category of stocks got de-rated in the recent correction and is down between 40% and 50% from its peak.

As we speak, JFL is down -45% from its all-time high made in Oct 2021. But this alone will not make it a good buy. In an increasing interest rate scenario, assigning a high premium is a thing of the past. This carries the risk of further de-rating for the stock. The company has to deliver for two-three quarters to regain investors’ confidence. With no immediate growth trigger, stretched valuations and peak margins, it would be better to wait till the earnings catch up with valuations. NOTE: This article is for informational purposes and should not be considered specific advice.

Capitalmind Premium subscribers: Join the conversation or post your queries on #long-term-stocks