Investors are exiting everything. Crypto, Mutual Funds, Stocks, even Gold. The biggest question now in every investor’s mind is, where is the bottom?

What triggered the fall?

The Russia-Ukraine war might have put brakes on the post-Covid global market rally, but the final nail in the coffin came in the form of the Fed and RBI.

The Fed changed its stance in March 2022, when it raised the benchmark interest rate by 0.5%, following a 0.25% increase in May. More importantly, the commentary turned hawkish for the first time since 2008. Almost front-running its global peer, RBI increased the repo rate by 40 bps with an out of turn change. It also revised its inflation outlook for FY23 upwards to 5.7% from earlier 4.5%, indicating more tightening is coming.

How do you know where is the bottom?

Nifty made its recent high of 18,614 on 19th October and is currently down by exactly -15% as of writing this.

How much more will the NIFTY fall?

To identify how close are we to the bottom, we looked at historic data.

We keep a 5% target to remove all the whipsaws and extreme short-term trades and to make some minimum profit of the trade.

With this in place, let’s look at our results. The strategy would have taken 18 trades in the last 22 years.

Investing after a 15% fall How to read the data? 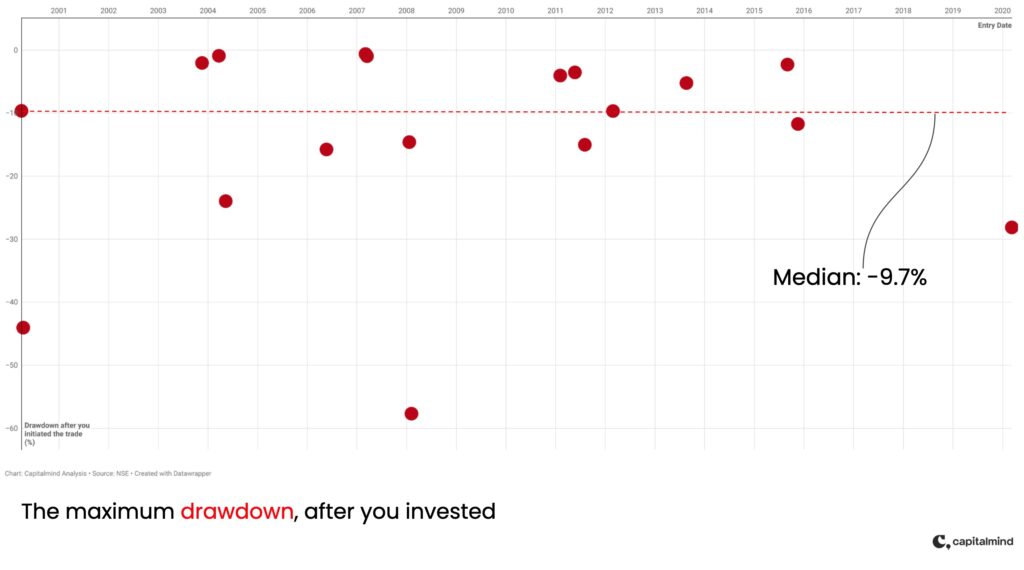 Ok. So the above charts are for a 5% profit target. What if you have a higher profit target? Let’s look at what happened every time you invested in Nifty fall with different profit targets?

Findings of the Study

How about other scenarios?

Along similar lines, here are the backtested results for various other drawdowns and profit estimates:

For that my friend, we have to understand one of my favourite quotes of Deepak. A stock that was down by -90% was initially down -80% and then by -50%. Just math.

How to read this chart?

Note how the time to rebound reduces as the NIFTY falls further from the peak, but then jumps up once the NIFTY falls 40%. This makes sense because most times the NIFTY falls under 25%, but on rare occasions it falls more than 35%, it then falls even further, and takes longer to recover.

Going by sanitised metrics like medians, the probability is high that we may be closer to the bottom than the top. However, market return distributions have fat tails and so every now and then markets go far from the median. Nothing in this post is a prediction. Certainty about future market levels is good for airtime on CNBC, not for much else.

Want to backtest yourself?

This article is for informational purposes. This is not a recommendation to buy or sell securities. For access to premium research, model portfolios, signals for our trend-following strategy and a vibrant member forum, you can subscribe to Capitalmind Premium here.