The RBI has suddenly increased interest rates by 0.40% (40 basis points or bps) for the first raising cycle in four years. The last time rates were increased was in Jun 2018. 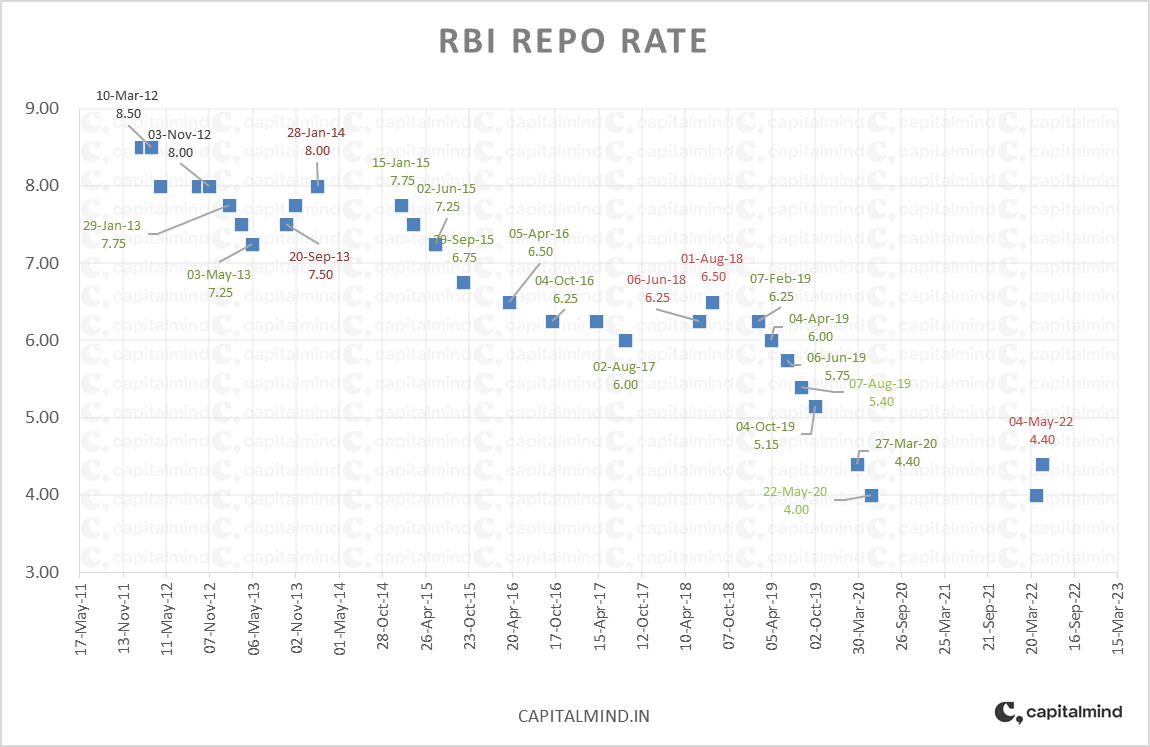 This has a complex problem. What does it mean when RBI increases rates?

The rate they have increased is the “repo” rate. Which is the rate at which banks borrow from the RBI. But ardent followers of RBI will know two things:

This is correct. RBI has put so much money into banks that banks are actually parking money with the RBI, over Rs 570,000 cr every day back with the RBI under reverse repo. This reverse repo earns some interest. In the fixed rate reverse repo (now called the SDF – read our post) the rate used to be 3.75% which has now increased, along with the repo, to 4.15%. There is also a Variable Rate Reverse Repo (VRRR) where banks can bid for how much they want RBI to pay. This VRRR bid rate cannot be higher than the repo rate. Earlier, VRRR auctions – typically 7 day or 14 day duration – went at 3.99% when the repo rate was 4%. Now, the VRRR bidding can go up to 4.39%.

That means banks will actually earn 0.40% more on their money that’s being parked with the RBI. This does two things:

But the second point has a hitch.

There’s a certain amount of money called the Cash Reserve Ratio (Read our post on CRR and Liquidity ratios) that has to be given to RBI, interest free. This is about 4% of all deposits. Now that rate has been increased to 4.5% of all deposits. This is the first time in nearly a decade that the rate was raised.

For banks, this means they make less money on the incremental CRR requirements. Currently CRR balances are about 676,000 cr. and the incremental move will mean that another Rs. 87,000 cr will have to be parked as CRR, earning nothing.

Effectively the policy is slightly negative for banks – they will earn a little bit lesser.

The stance is officially “accommodative” with a focus on withdrawal of this accommodation. Meaning, they will continue to keep liquidity in surplus but reduce that surplus over time.

Why is the RBI raising rates? Inflation.

The world fears inflation and it’s happening, with US and European inflation being as high as 7.5%. India’s only at 7%. However, the gap between last year’s index and this year’s, which is what we describe as inflation, is likely to narrow in the months going forward. Remember that the month’s data is visible on the 12th of the next month. The difference between the green and gray line above should be narrower after June, because of the base effect. Food inflation is a huge deal for India and that has been rising. In fact the biggest deal in the index seems to be in oils – we import Sunflower oil from Ukraine, and Palm oil from Indonesia, both of which are under threat. 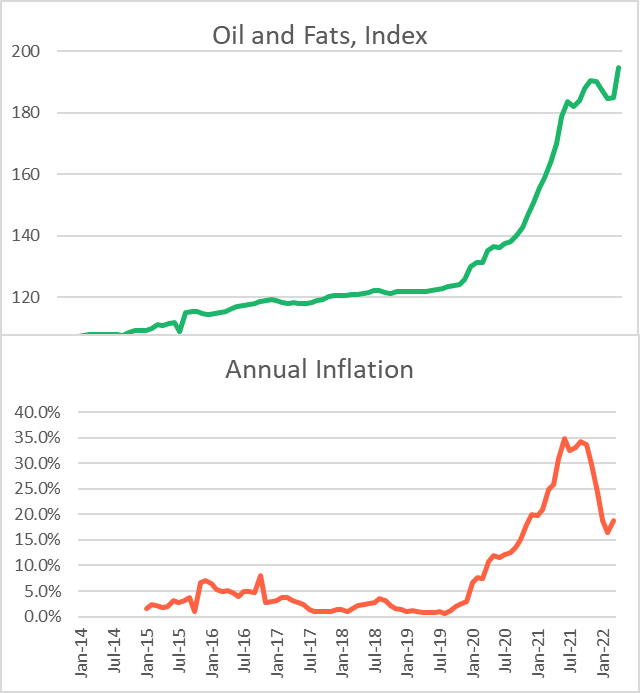 This may not last too long at least in palm oil. Because Indonesia produces 3x the palm oil compared to what it needs domestically, so if they don’t export it for too long, it will just rot. (Source) Within a month or two, the export ban should be lifted at least partially.

But the damage will be done in the next few months in terms of the perception of inflation.

Will inflation be persistent?

Inflation is a monetary phenomenon: too much money chasing too little goods. However, there is a mass feeling that the central banks printing money will cause inflation. That’s not true, and perhaps the discussion for another post. The true culprit is more money that is given in the hands of people, not to banks. This can happen due to either banks lending money in a big way (credit growth) or the government spending money insanely. In the last decade, credit growth around the world has been abysmal.

But in the last two years, the western economies have given free money to their citizens in the name of Covid aid. America offered $600 a week as additional unemployment payments, $600 to $3000 in one time checks etc. This is obviously money in the hands of people, borrowed by the government. And that will cause inflation – as it seems to be doing now.

India has no such equivalent. Therefore, our inflation is largely going to be about food and fuel, where the impact seems to be relatively temporary and supply-based. When supply of oil eases up – probably later this year depending on how long the Russia-Ukraine war lasts – we should see some relief. Importantly, India may get lots more oil at sub $70 prices from Russia, which could lower the burden on fuel prices locally.

If inflation isn’t persistent in India beyond July-August, here’s what we think will happen:

If inflation is broken down, it will cause a recession in the west. The US GDP contracted in Q1 2022, and if there is truly a recession, rate cuts will be reduced in the west, and India will also follow. In my view, the threat of persistent inflation is very low, specifically for India.

The impact on the debt market

Bond yields have taken it on the chin, with the 10 year bond yield rising to 7.4%! This is the highest yield we have seen in three years. 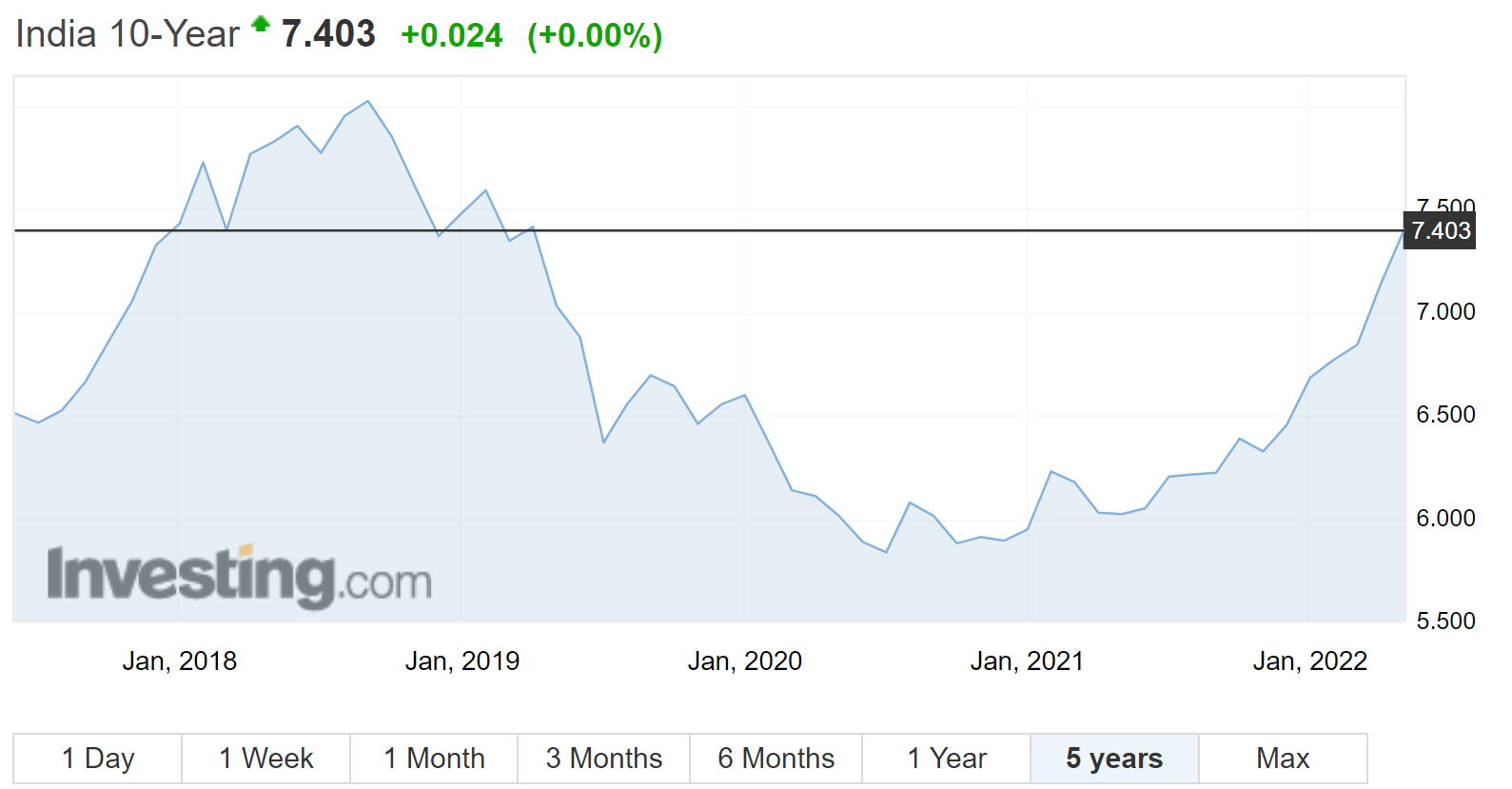 In fact, the entire yield curve is up heavily. Beyond the 4 year to maturity mark, nearly all bonds are trading at 7% yields or higher! Aside: Good Investment Opportunity at the near end?

Even bonds that mature in 2023 (8 months to 1 year in duration from now) are now at 5.8% or more. This is now the highest interest rate for this time period. For someone who is parking short term money in fixed deposits, this may be the safest and highest yield you can get! But note that you’ll need to keep the money till maturity (next year) because markets could take prices even lower before that.

Most liquid fund yields are still less than 4%. Most fixed deposits are under 5% for a 6 month period. The government’s the best place to park funds for the short term, it seems!

The impact on mutual funds

The impact has been massive on mutual funds. The two days after the rate hike saw a carnage in bond prices. The entire debt universe has seen horrendous returns. You can see the longer term categories below. (I’ve used a one week return instead of two day) In fact, even liquid funds have had negative returns in the two days after the hike!

What can you do with bond funds? The answer: nothing much for now. The biggest hit are longer term funds, but even short-term, and PSU/Banking funds are hit. The best route right now is to balance out long-term versus short-term funds, in my opinion. Given there will be more hikes the positioning can be:

The point is: there is some serious pain, and we expect even more going forward. Exiting has major tax implications, so do it carefully if you must reorganize.

What happens to equities?

Stock markets will hurt because money is getting more expensive. However they won’t hurt all of a sudden – we could see sudden rallies and sudden drops, right as the markets readjust to the new regime. More importantly, markets will react to lack of liquidity – and events like a large LIC IPO will take out liquidity by locking in cash of the FIIs just when the market seems jittery.

A bigger issue is: what if someone big goes bust? All market falls reveal a leveraged player that throws up their hands. You find out who’s swimming naked only when the tide is going low, and this is such a time. That event can hurt the equity markets too because of forced selling. We’ll only know that in retrospect, but such an identification is a good time to buy stocks. Because when someone’s exiting in fear, that’s a fire sale – when stocks will be sold at much lower values. Still, you have to be sure if it’s really just fear or something else.

If you’re in for the long term, this is not a decision making time. Sit still and ignore the markets. Eventually, the fear and greed will play each other out, and life will return to normal, and so will markets. Note that the earnings are still quite decent – with the index P/E falling to just 21 (used to be 30+)

Note that a lot of people think the best place to hide is “defensives” like FMCG. This is dangerous because:

A better bet may be the IT pack and relatively less levered companies, but in a steep market fall there will be nowhere to hide. However, the long term outlook for Indian companies remains quite positive, in my opinion. So steep falls will be met with steep rises eventually, at least in India. If there is pain, it will be in the short term.

Will banks increase cost for loans?

They have already. ICICI and Bank of Baroda have raised rates by 0.4%. However the new MCLR regime means that if you take a loan on day X, then the first “reset” (to a higher rate) will happen only once a year, for most housing loans. So you might only see an increase in the next reset cycle, which can take upto a year. 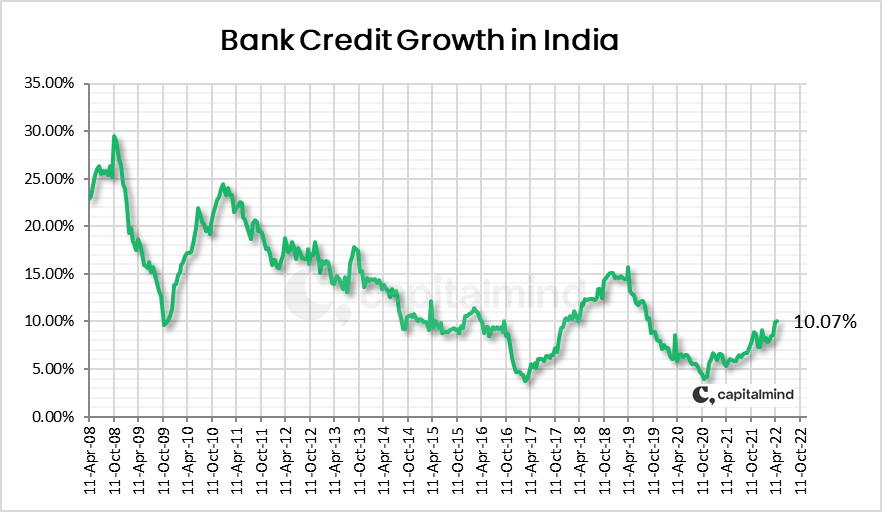 No currency depreciation at all

Despite massive sales by FIIs, we see almost no fall in the rupee-dollar exchange rate. It remains under Rs. 77 to the USD. The RBI seems to have been selling a lot of dollars, with stated reserves falling by about 7% to $600 bn. However, there’s a lot of reserves still sitting in futures contracts owned by the RBI, so it’s not altogether that low.

Given this, the probable impact of the rise in bond yields seems to be cushioned, with RBI keeping the USDINR steady. Having the currency fall big time would just create more inflation.

Rate hikes are the new normal. The US raised rates. India has too. We should brace for the impact. Already we are seeing:

On that note, we’ll just say this: fixed income is a rough space to be in now, but there are upcoming opportunities! We will watch out for them on the Capitalmind Slack channels.