Is the Edelweiss Housing Finance NCD a good investment at as much as a 9.7% interest rate? What’s the risk? We explore the issue in detail just as it hits the markets.

Short take: No. Edelweiss Housing Finance faces many challenges – rising non-performing assets, high cost of borrowing and a shrinking loan book. You might like the return *on your money*, but it shouldn’t be at the cost of worrying over the return *of your money*. Being a risky offer, regular retail investors should avoid the issue, which we suggested in the case of Indiabulls Housing Finance’s NCD offer as well.

For compulsive risk-takers looking to deploy surpluses after making their systematic and other investments, there are higher yields to be had from the NCDs issued earlier by Edelweiss Housing Finance (EHFL) trading in the secondary markets. These are available at yields that are a good 2.5-4 percentage points higher than the coupons given by EHFL in this issue.

All about the issue

This issue of NCDs from EHFL is secured. That is the assets of the company back the offer. There are monthly and annual coupon (interest) payment options. There is a cumulative option as well. The issue is rated AA-/Negative by CRISIL and AA/Negative by ACUITE. The bonds will be listed in the BSE. 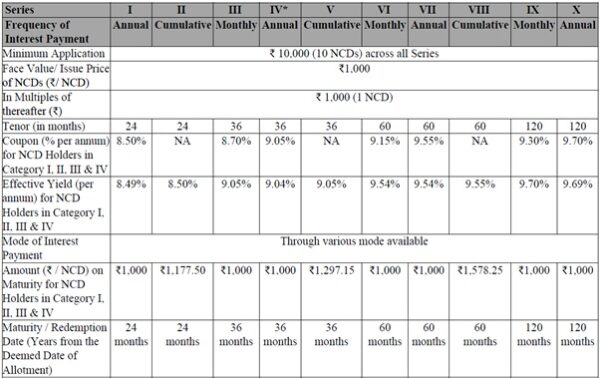 The coupons are higher than those offered by Indiabulls Housing Finance’s NCDs. The minimum investment required is Rs 10,000 and multiples of Rs 1,000 thereafter.

How NCDs are taxed

The interest from any NCD is clubbed with your income and taxed at your slab. If investors wish to sell the bonds in the BSE or NSE, any capital gains (selling price minus buying price) are taxed at 10% if the holding period is more than one year. Short-term capital gains at 15% would be applicable for holding periods of less than one year. The cumulative option is taxed as interest accrued at your slab rate.

Too many negatives to contend with

In the aftermath of the IL&FS payment default crisis, most NBFCs faced the heat in terms of liquidity constraints. Given that the real estate sector faced quite a weak period over the past 5-7 years, the IL&FS crisis only worsened the situation for builders and developers. In response to the COVID-19 pandemic, the lockdowns were perhaps the sledgehammer assault on the sector and companies therein. Both retail and wholesale customers defaulted on loans as the economy was in the doldrums, with salary cuts and job losses.

In light of the above events, a relatively small lender like EHFL has had a particularly rough ride over the past few years.

EHFL has witnessed a 30% fall in its loan book from FY19. The following table makes it clear. Customers may well have switched out to other lenders that offered better deals.

The loan book has recorded a steady decline in every segment, with the LAP portion facing the steepest fall.

Though the company expects some uptick from Q4 of FY22, it remains to be seen if EHFL manages a turnaround from the all-around weakness seen in its segments of operation.

The gross non-performing assets (GNPAs) ratio has increased from 1.82% in FY19 to 3.8% for the nine months of FY22. The absolute Gross NPA figures have risen even on a smaller loan book. What seems more worrisome for the company is that the Stage III loans or loans 90 days past due are increasing. Notice the additions to the GNPAs in FY21 – from Rs 157.1 crore in FY20 to Rs 233 crore.

Any worsening of the NPA situation could worsen the liquidity scenario for the company and necessitate fresh funding, that too at higher rates.

Edelweiss Housing Finance borrows at fairly high rates compared to other companies in the space. At 9.18%, it borrows at a rate that is a good 100-320 basis points higher than some other housing finance companies, highlighting the risk premium that lenders seek. 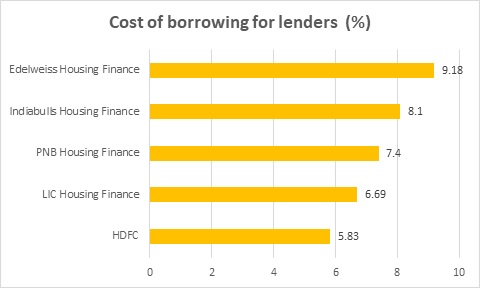 Because the borrowing rates are high, the lending rates are equally high. The table below shows the mean lending rate of 12.2% for housing loans in Q3FY22. This is when the top lender – NBFCs and banks – offer loans at 6.5-7%!

The rates for LAP borrowers are stiffer.

With such high rates, there is clearly likely to be a flight to other lenders that offer way lower rates, especially those with strong credit scores and borrowing profiles.

Other EHFL NCDs in the bond markets

The NCDs issued by EHFL in the past are traded in the BSE and NSE. As indicated earlier, the yields are much higher than those offered in this NCD offer. The data for such NCDs is as of April 6, 2022.

When the secondary markets offer higher yields than the original coupons, there is clearly a perception of high risk, which indicates the premium (higher spread) demanded by investors to compensate for the risk.

What should investors do?

Given the challenges around Edelweiss Housing Finance’s business segments, lack of growth (and actual contraction of the loan book), retail investors with a low risk appetite can give this NCD offering a miss. The coupons, though relatively high, may not be enough – as is seen from the higher secondary market yields.

Investors who can take high risk and have a disposable surplus to dabble within the NCDs of the company can do so via the secondary markets. They, too, might want to avoid the primary issue.