After a smart 2021, what will happen in the next year? We’re not going to predict anything, and if we do, ignore us. The point is to set up the thought process: what are the various things likely to happen? And what should our response be to them?

First, a quick few things that we can recap in 2021. Markets gave us a sixth straight positive year, with a 24% return on the Nifty. 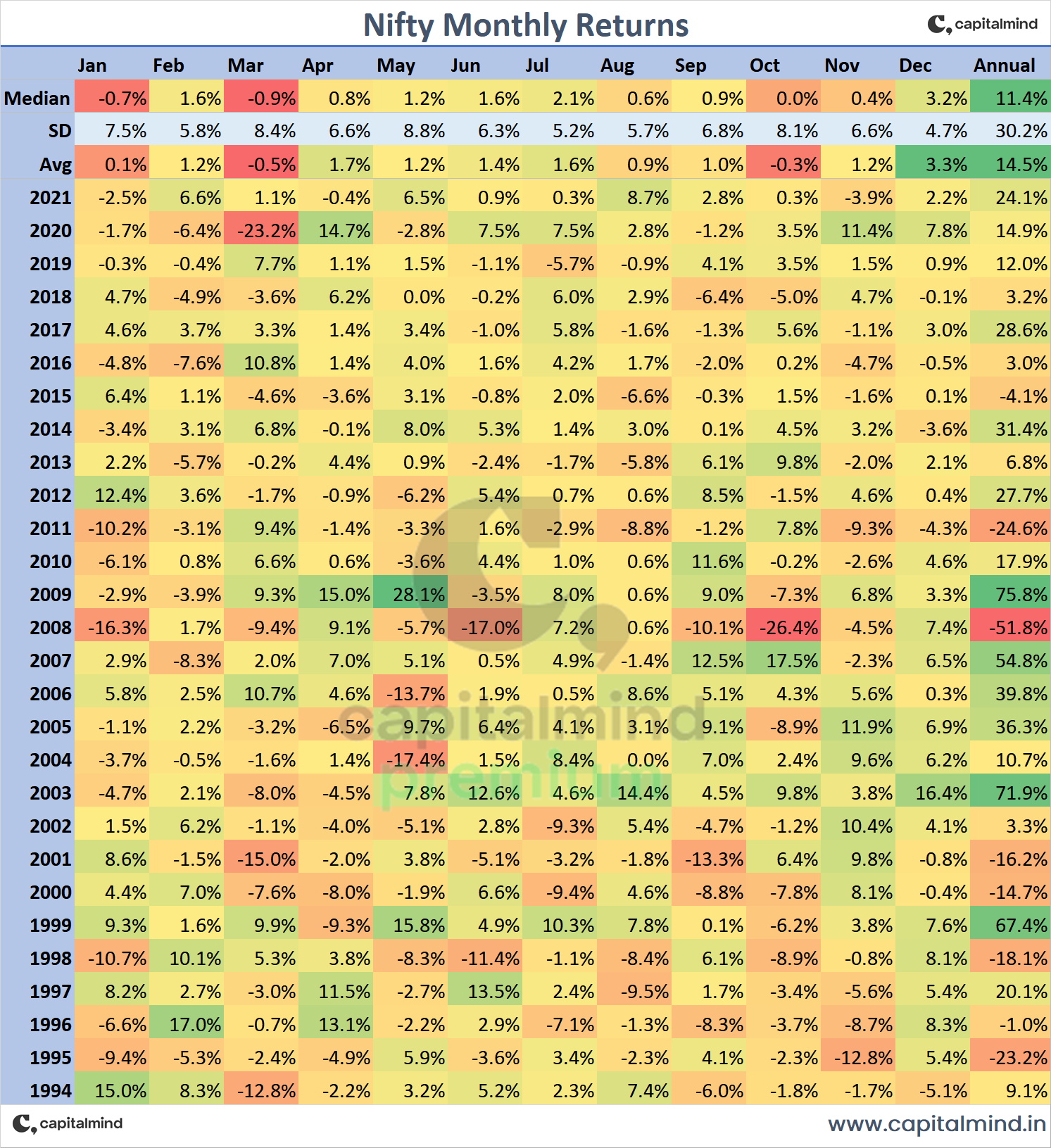 At Capitalmind Premium and the Capitalmind Wealth PMS, we beat the indexes handsomely in our active strategies, so we’re hoping the next year is similar.

Sector-wise, alpha and momentum did really well as factors. (The below graph is as of yesterday, so numbers are slightly different from the above table)

The weakest sectors were pharma, FMCG and Banks. IT and Real Estate did really well.

I wish we could predict this, but we’re biased towards market securities, so we’ll always say equity and debt versus real estate and gold.

More important is where we don’t think you should invest.

Gold hasn’t done that well in the last decade. In fact, adjusting for inflation, Gold returns on a 10-year basis have been negative! 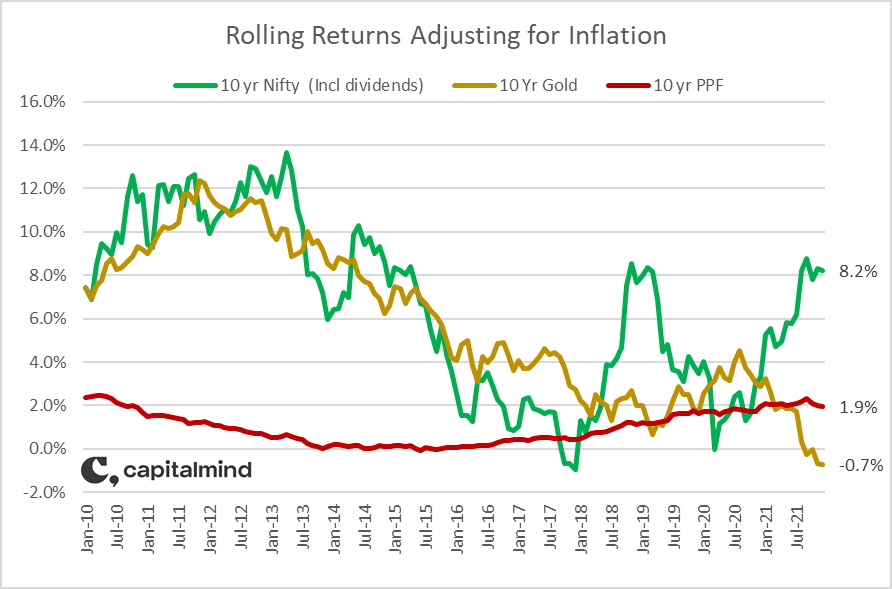 This isn’t a great time to have been in gold, even though in 2020, we saw a spike in returns temporarily. Our major thought about change:

So what else is a bad idea? Let’s look at the macro.

Interest Rates and Inflation: Both Rise?

OMG, Inflation’s rising! Aren’t interest rates going to rise? To some extent, they already have, and the yield curve on the Indian government bonds already shows a bump up: 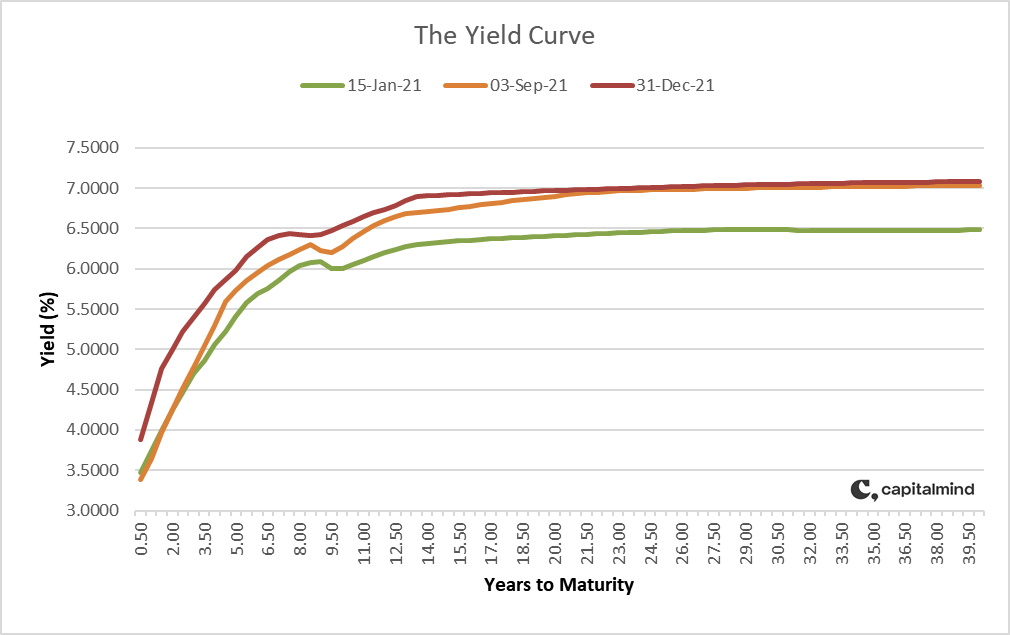 However, most of the damage at the longer end of the curve (read: more than 15 years to maturity) seems to be done already, with those rates hitting 7%+. The problem, however, is in the short term: yields there are rising. If you look at 1-year returns of most funds now, short or long term, they are under 4% because short term rates are lower than 4%, and long term bond yields went up, so they negated some of the higher interest rates that you would have received.

If inflation isn’t too much, the central banks will not raise interest rates too much. But even if they do: 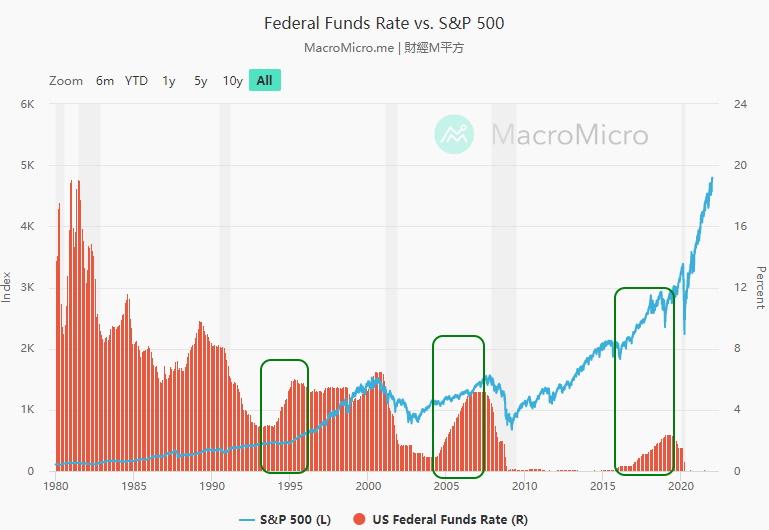 This actually suggests that:

Note: In the first week of the year, RBI appears to be selling government bonds. This doesn’t do well for both short and long term bond yields. We could end up being horribly wrong on this if the RBI continues to be a seller. (There are good reasons for the RBI to sell, usually to control liquidity. It buys to create liquidity and add money to the system, and it will sell to take money out. We have excess liquidity of over Rs. 700,000 cr. so that RBI might be a slow seller for a long time indeed).

Supply chains have been destroyed in many ways:

What happens when you can’t supply something important from an import? You look for it locally, even at a higher price. As this increased, local suppliers in many countries started to see action. Whether it was steel, or some intermediate chemical, domestic suppliers in India was seeing increasing demand and even export demand in some cases. That has changed dynamics for several companies. In steel, for example, the price rises were so dramatic that steel companies showed record profits and huge margins. In 2021, nearly all the large steel companies had managed to cut their debt by nearly 50% by paying back the principal from the margins they earned.

Not any more, it turns out. Steel prices are down 25% from the peak in October 2021 because the supply chains are slowly easing up. As that happens, supply will resume, and people will start to cut prices, as they have done in steel. Margins will come down, but more importantly, inflation in the commodity landscape will reduce.

Price cuts can be destructive, so:

Stay away from commodities and supply chain beneficiaries

While crude remains around $80, we see a massive reduction in commodity prices from the basics like steel or aluminium to other imports. This and increased supply worldwide, from the unwinding of the supply chain mess, will cause commodity producers to see reduced margins. That is always a negative for stocks that are commodity producers.

This will also likely apply to API players, steel and base metals producers, the ancillary industries, etc. In this business, there is no mercy – prices will move before fundamentals. We’d avoid metals, for sure.

Auto and the Charge of the EV

Worldwide, EVs are taking over. Electric cars are now 65% of all new car sales in Norway (link) and about 25% of European sales (November, Link). We expect this trend to accelerate this year, and not because EVs are environmentally good. It’s because EVs are better cars, cheaper to run, and less a pain to maintain. There’s no gearbox, there are no spark plugs, and there’s little to maintain. Battery costs are coming down already, and charging infrastructure is making its way across countries.

It may be useful to build positions in EV-related companies- from car manufacturers (who benefit from falling steel prices and EV demand) to ancillaries in the EV ecosystem. This will include:

We believe auto will finally show some enthusiasm this year. But we’ve said that for a long time, so take our view with appropriate Na-Cl.

Will FMCG get even more expensive?

Most FMCG companies are trading at P/E ratios of more than 50. Hindustan Unilever has 67 times earnings, Dabur at 54x, Britannia at 55x etc. This is a challenging valuation to sustain over the long term. While these are ‘quality’ companies, with high returns on equity, they are not in majorly growing markets – sales growth even for a 10-year basis has been 10% or so. Profit spikes came in from the lower marketing costs during Covid, but that is likely to reduce in the coming year. Already, FMCG saw a “flat” year in 2021, where the index only grew 9% against Nifty’s 24%.

What happens next? They won’t go to zero, but it’s quite easy to see them stagnate or correct to more acceptable P/E levels. Their franchise, too, will need more meaningful expenditure to fight competition. Margins may not compress much, but Unilever (HUL’s parent) trades at a P/E of 22 worldwide if you look at mature markets. We wouldn’t touch this sector.

If you’re paying a high P/E, you should get the growth you pay for. With FMCG that is just not happening, so a price correction should not surprise us.

Banks were the worst performers in 2021, but that could easily change in 2022. The problem in banks was also the valuation, which has corrected for the most part. And then growth because the banking system continues to see less than 7% credit growth in absolute terms. This is hardly replacement level growth – if a bank has to lend Rs. 100 at say 8%, it has Rs. 108 to lend next year (assuming it rolls over its deposits too). To stay at the same place, they need to grow at 8%, but growth has been under that level for a while.

With hardly any growth, why will banks do well? The weakest banks have too much lending to the weakest sectors – microfinance, two-wheeler auto, three-wheelers, small and medium businesses etc. Recently we’ve seen RBI place directors on RBL bank’s board, and earlier, on Ujjivan’s board. Bandhan, too struggles with the portfolio, even though they are adequately capitalized. The problem of the bottom few will translate into an increased market share for the top few banks. SBI continues to dominate in the public sector, and in private banks, the quad of HDFC, Axis, ICICI and Kotak are likely to gain share.

On the NBFC sector, a few changes come to the fore:

Whether this translates to greater profits is still a matter of conjecture, but it may be a good framework to apply as we go along. The biggest banks and the biggest NBFCs will thrive.

What about the others?

When markets correct, the fundamentals will correct

A general note of caution: in India, promoters control companies (majority stake) and will “engineer” the financials to look good when the markets are going up. (Not all, but a significant number of companies) There is no incentive to do so when markets fall, so the numbers look bad. They will kitchen-sink the profits (take losses when stock markets correct). Some will even have lousy corporate governance like acquiring promoter-owned companies. The best analyst won’t discern why, but the point isn’t to be the best in theory: it’s to be street smart.

This is how it is. This affects your portfolio. Don’t love your stocks so much that your ego becomes your enemy. When you can’t recognize the man (or woman) in the mirror, don’t break the mirror. Change.

So what’s the verdict?

Forget all this; invest in a structured portfolio like Momentum or Passive and stay invested. In Long Term Multicap, we will build positions based on some of the thoughts above and use the right opportunity.

The point is to have a strategy and react to events as they come. We don’t expect a big crash. If we did, we wouldn’t be in the market at all. We don’t even know how to predict such a thing. The better thing is: let the market fall at least 10% and then take a call, based on what’s happening at that time, if you need to build cash positions.

In general, buy companies you like. Don’t worry about markets falling 10% to 20%; they are designed to do that. Worry if they fall more than 20%, and translate that worry into action. Take money and time out for the things you really want to do, like a holiday or a drive into the sunset.

We reviewed how Capitalmind Model Portfolios did in 2021:

Capitalmind Focused in 2021: A year of transformation [Premium] & [Trial Users]

Capitalmind Chase in 2021: Euphoria to despair and back again