Investing is an interesting field. Not only because you make money out of it, and that money can do great things, from buying big shiny objects to letting you go on that holiday that always seemed too expensive. That’s also true about gambling. I speak of something entirely different, however.

What’s interesting about investing is that anyone can do it. It doesn’t take rocket science to do it, and it’s quite likely that rocket scientists don’t do quite as well as an average person on the street. And because anyone can do it, we tend to believe that people with money can tell us how to do it. The problem, however, is that we believe expert advice is the only way to become successful investors. Often, advice devolves into myths that will damage you more if you follow them blindly.

This is obviously what they’ll tell you with a story like this. Amit saved for ten years in his 20s and then stopped. Baldev started saving at the age of 30 and saved for 25 years, but Amit was still ahead. So save as early in your life as you can!

This is balderdash. Mathematically, it is correct, of course. But in reality, things are often different. In my younger years, I would only make enough money to about get by – and I had barely anything left to save; if I’d tried to save then, I would have lost some of the best years of travel, friendships and food; and saved it for what? Growing old when you can’t travel because of Covid restrictions, you can’t get to meet friends because they’re all busy and you can’t eat that food because of age.

So if you couldn’t save then, are you likely to have to save for the rest of your life? Of course not. For one, you’ll have more money when you’re older because your life will not be so much about making merry as earlier, and you’ll have more experience, so your salary is higher. The higher number changes the game in a way that you cannot imagine. To the extent that even if you invest the higher number in something as boring as a fixed deposit, you might end up ahead.

I demonstrate it in my book, and please excuse the plug (you’re going to have to, it’s going to happen some more) where I write this:

Take two people. Anjaan and Sumit. Anjaan saves Rs 10,000 a month for 10 years and invests in stocks. Sumit saves the same Rs 10,000 a month. But he invests in a boring bond fund, increasing his contribution by 10 per cent every year. Just a slight increase, you think. 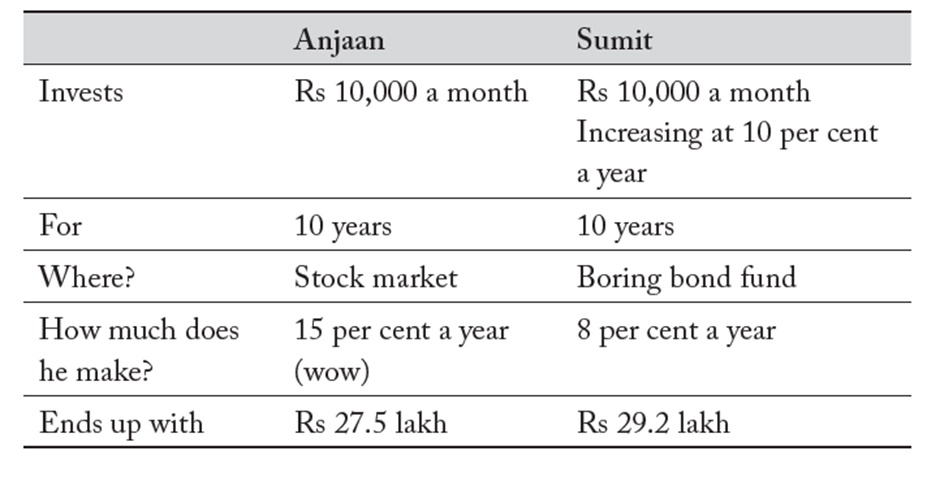 What? Sumit ended up with more money? You can tell me that, oh, Anjaan invested quite a bit less. Yes, he did. He invested Rs 12 lakh. And Sumit invested Rs 20 lakh.

But you forget something. Both invest, and the rest of their money would just get spent. A little here, a little there, you don’t even notice it, and it’s gone.

If someone tells you that you need to take risks or that you need to invest early to make it, they’re both wrong. You can start any time, and in all likelihood, you will find a way to make enough money without taking insane risks.

Track your money every single day

This isn’t often given advice, but all these apps show you red/green blinking lights to tell you exactly what your net worth is today.

This is great for approximately the first 240 hours of investing. The honeymoon period after which you discover, to your chagrin, that your stocks don’t love you back. They keep moving all over the place, triggering emotions that make you think: “I had a ₹ 500 profit, now it’s fallen to ₹ 100, should I sell?”

These are warning signs that you need to shower in cold water.

Looking at your investments too often is a waste of time unless you’re a short term trader. If you want to invest for the long term, you have to give those investments some time before re-evaluating them. In general, if you make ten different investments and just let them be for a long time, it’s quite likely that five of them will die. However, the remaining are quite likely to have grown so much that they’ll give you a great overall return.

In the book, I talk about how I actually saw this happen with my own family’s investments.

Insurance makes sense when you have dependents. If you die, people who depend on the income you make will get financial help to live onwards.

Why would you buy insurance for young children? They depend on you, not the other way around. Sure, the insurance companies sell such things, but they are not suitable to buy. Similarly, you don’t need to buy insurance if you have no dependents like a retired person who has no income, or a person whose children don’t depend on her for income, and so on.

When you reach a stage in life where, if you should die, your dependents are well taken care of, and your loans are already repaid, then you don’t need insurance.

Many children’s insurance plans come by, saying that if something happens to you, they’ll still pay out when the child turns 18. Once you do the math, you might find that you’ll make more money in a simple fixed deposit instead of paying those hefty premiums. There’s a charm to the word “insurance” that seems to make it easy to take money out of your pocket. Don’t do it.

If you’re an investor, you’ve heard of Warren Buffett. He’s a jolly old fellow that’s made a huge amount of money investing in markets. His most famous exports are short, excellent sayings that are abused every day in the investment world.

Here are a few.

This is good two-rule logic for life in general, such as “Don’t die” and “Don’t forget not to die”. You cannot deny it. However, when people tell you not to die, they tell you in a situation where you have to take some risk. Buying into a stock that might lose you money? Building a portfolio of new IPO companies? Don’t. Because Warren Buffett. That’s the extreme Buffett, which I’m sure even the jolly old man would disapprove of.

Our favourite holding period is forever.

This is often quoted when you invest in a stock for a relatively short period of time. Or if you want to sell a stock because of some strange situation there, and well, Warren Buffett. But some stocks are relatively short term investments because they go up and down in cycles, and it’s perfectly valid to walk away when you’re at a point in the cycle where you might actually get better returns going elsewhere. And it’s not like Buffett is himself very beholden to his rule because one study found that his company, Berkshire Hathaway, held about one-third of their stocks for only six months. Obviously, if you buy a stock and it does something you don’t like, you sell. So did Warren Buffett, and he’s done well.

You should reduce equity investing as you grow older.

There is a formula that says: “Invest 100 minus your age as the percentage of your money in stocks.”

Let’s say you’re 60 years old and you have some money, but it’s only enough to survive till you’re 90. This means only one thing – do not take any risk with the money. Find a job, get un-retired and build yourself some buffers—no equity for you.

If you have more money than the bare minimum (and I speak in my book about how you can calculate what you need), then that excess can be in risky assets. Like stocks. Or art, or even commodities like gold. Risk what you can risk.

When you’re younger, you might have a loan for a house or a car, and you might be paying that off. The large liability exposes you to high risk if you lose your job, and thus you might need even less money in equity than the (100 minus age) formula affords you.

Higher risk doesn’t always guarantee a higher absolute number like the case above. You could choose to save more. What if you’re 59, and there’s a crisis as big as the Lehman crisis in 2008 when the market fell 60%? Any amount of equity would make you miserable. Optimize for the lack of misery, and invest in what wouldn’t make you unhappy. Even if the answer is “I can’t lose money” (maybe because of too much Buffett), then you can use a fixed deposit and plan to invest a higher amount instead.

The problem with the formula is that it looks suspiciously right but is usually exactly wrong. What matters is who you are.

In the world of investing, the best thing you can do is learn from your own mistakes. But often, the mistakes you make are your own, and what you learn from them may not apply to others. I’m an oldie, and I haven’t invested in cryptocurrencies because I think it’s all a big scam. I’ve seen it all before, I think. And yet, it’s made a lot of people a lot of legitimately good money, so I’d have to say that even my words, shaped from an experience of some people scamming others, is probably not that useful in a world where the other good “coins overshadow one scam”. Investing is full of great advice that can be bad advice at a different time, for a different person. 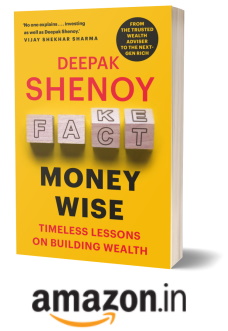