On 24th December 2021, the Reserve Bank of India appointed Mr Yogesh Dayal (the Chief General Manager of RBI) as an Additional Director on the board of RBL Bank.

Less than 24 hours later, Mr Vishwavir Ahuja, the MD & CEO of the bank, went on leave with immediate effect.

The bank released a press note & conducted a conference call to say; All is well. Shareholders, it appears, were not convinced, and the stock opened at lower circuit on Dec 26th.

Ratnakar Bank was founded in 1943 with its HQ in Mumbai. It was a rural-focused bank till 2010. In July 2010, Mr Vishwavir Ahuja, the former CEO of Bank of America, India, joined the board to make the bank future-ready. In Aug 2014, Ratnakar Bank renamed itself RBL Bank Limited.

But aggressive growth at lending institutions tends to be accompanied by deterioration in asset quality.

All the buzz around asset quality

The first big blow in asset quality came in Oct 2019, when the bank released its exposure to groups like CCD, Sintex, Essel group to the extent of 1800 Cr. This came as a big shocker to the markets.

Just when the bank was coping with its stressed assets, the pandemic happened. RBL Bank, like all businesses, was impacted by the pandemic. But unlike others, it hasn’t recovered fully.

Provisions jumped from ₹113 crores in FY19 to ₹766 crores in FY21. In Q2FY22, they provided for another ₹650 crores. Write-offs were also of similar magnitude. Since FY20, the company has cumulatively written off ₹1,640 crores. The bank extended the moratorium to ₹1212 crores (2.1% of advances as of FY21).

Not good numbers, but not terrible, in the context of other banks.

The numbers say RBL Bank has not recovered and the larger private sector banks but is not necessarily worse off compared to other mid-sized banks.

How safe are RBL Bank depositors?

RBI says All is well

Just a day into the board-room drama, RBI released a press note stating everything is OK with RBL Bank. They clarified RBL Bank is well-capitalized & in a strong position. They appointed Mr Yogesh Dayal as an Additional Director to support the bank in all regulatory & supervisory matters. RBI asked depositors and other stakeholders not to react to speculative reports that the bank’s financial health remains stable. 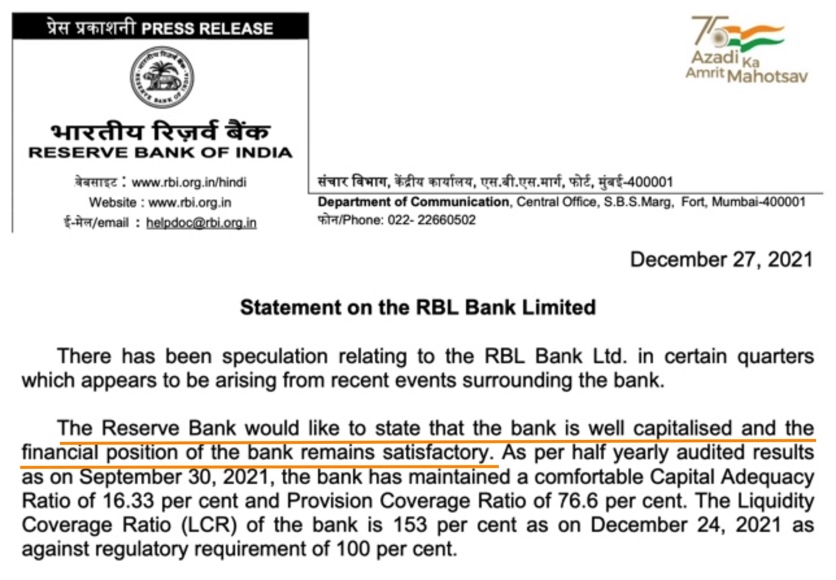 The numbers bear this out.

The bank has strong liquidity of ₹33,668 crores, i.e. 45% of total deposits. The remaining 55% can be arranged from the sale of assets at a discount of 25%. In other words, even if 25% of the loans become toxic, the bank still will be in a position to honour all its depositors. If required, the bank can raise approx 75,000 from its investments & sell assets to pay its depositors.

From the depositors perspective, things are stable. We don’t see significant risk with the bank.

In financials, perception breeds price. Cleaning up a bank and improving book quality is an arduous task. It may take years before meaningful improvements, if and when they happen, get noticed. In short, depends on whether “the worst is over”, which no one can say just yet.

Long term investors will need to keep a close eye on both fundamentals & technicals of the bank. With the kind of handholding & monitoring from RBI, things should slowly start to move in the right direction. A few quarters of balance sheet cleaning may be left before they return to growth.

In Dec 2018, Capital First NBFC was merged with IDFC Bank to form IDFC First Bank. Mr V. Vaidyanathan was the new MD & CEO of the merged entity. Considering his experience at ICICI Bank & how he turned around Capital First (erstwhile Future Capital), the market was bullish on the stock. Yet, three years down the line, he is still dealing with legacy loans. The market hasn’t given a premium to the bank, yet. 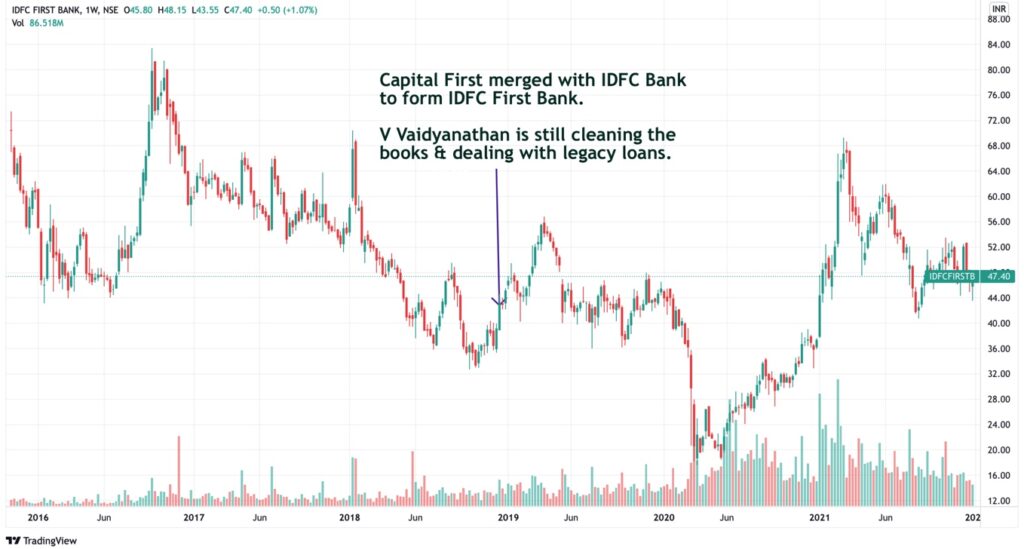 Another infamous example was Yes bank. Mr Ravneet Gill joined Yes Bank with a commitment to revive it. Fifteen months later, he exits the bank as RBI had suspended the board. His task remains unfinished to date. 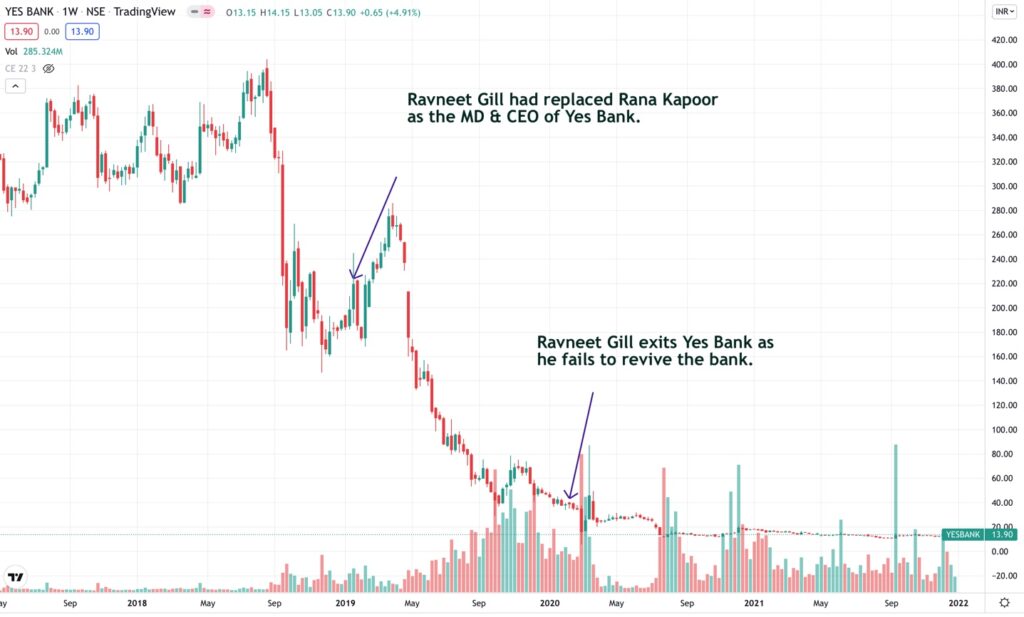 As of now, both these banks are stable. Asset quality has been improving, albeit slowly. Stock prices, however, haven’t shown strength.

For existing long-term investors, till the perception of the bank changes, reconsider total allocation to the stock and ensure it is within reasonable limits. Read Commonsense Position-sizing for investors. Avoid averaging down to reduce your buy price. If you choose to stay invested knowing that the price might not recover for a while, consider a trailing stop loss to prevent further erosion to the portfolio.

How about fresh positions in the stock?

For the reasons mentioned above, not until clear signs of improvement to the underlying business and importantly, perception is evident.

The stock is currently trading at 0.7X book (other mid-size banks with better asset quality are at 1.5X book). The bank is leveraged at 7.6 times. In all probability, it will go for a fundraise soon to bring down leverage & prepare for further write-offs.

There isn’t a strong case for trying to catch the bottom in RBL Bank.