One of India’s cheapest smartphones will be launched this Diwali by the company which offers the world’s lowest mobile tariff rates: Reliance Jio. JioPhone Next launched in collaboration with Google will start selling from November 4 at Jio and Reliance Retail’s network of retail stores.

The new phone will be targeting the 30 crore mobile users who are on the 2G network and will be Ambani’s new weapon to dominate the Indian telecom market.

Read here to know everything about the phone and its impact.

JioPhone Next is Reliance’s second attempt to bring 2G users on its network. The first was with the launch of JioPhone back in 2017. The total addressable market back then was 50 crore feature phone users. Four years down the line, the company has been able to grab close to 11 crore of them. 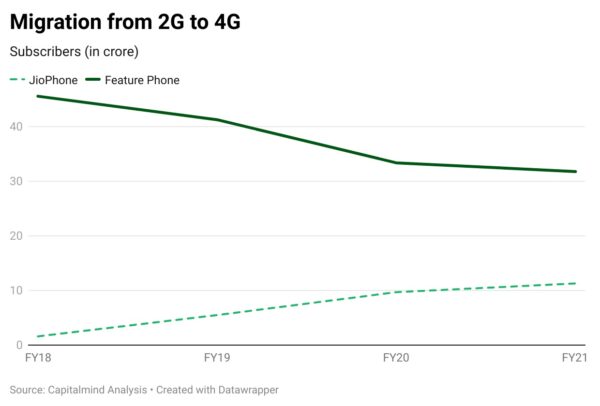 Reliance Jio, since its launch in 2016, has focused only on growing the number of data users in India and increasing their data engagement. With sharply lower data tariffs, it raised data penetration among smartphone users significantly. However, among featurephone, data penetration and engagement continued to remain low.

JioPhone launch was the first step in boosting data users and it continues to drive data user growth. JioPhone Next will not only help Reliance boost data usage among existing JioPhone users as it will offer them access to the Android ecosystem but will also get new users under its ambit.

Reliance and Google jointly developed JioPhone Next. It is a smartphone, with a 5.45-inch display, Qualcomm Snapdragon 215 processor, 3,500 mAh battery, 2 GB RAM, and 32GB inbuilt memory with expandable storage of up to 512 GB & runs on an optimized version of Android. The device which is priced at ₹ 6,499 comes with attractive payment plans and bundled tariffs.

There are two options – the device can be purchased outright without any financing option for ₹ 6,499 or it can be purchased for an amount as low as ₹ 1,999 with multiple EMI options which are bundled with data and calling benefits.

On Amazon, smartphones are available at EMI, where the interest rate chargeable varies in the range of 12% to 15% per annum. As the company has not provided any details regarding the rate of interest, we are assuming the interest rate applicable on JioPhone Next would be around 13.5% on the balance of ₹ 4,500.

The above plans are for 30 days, while normal Jio plans are for 28 days. However, even if we convert the 28-day plans to 30 days, the implied tariffs are a bit on the higher side compared to the normal tariffs offered by Jio, but cheaper than Airtel and Vodafone Idea.

However, this is based on the assumption that the interest rate is at 13.5%. This lower rate could be less likely as the company is offering phones on credit to masses without any security and proper credit record. The credit risk is much higher as compared to an user who is buying a phone on Amazon using a credit/debit card. Now if we try to extrapolate the interest rate by assuming that the mobile tariffs are similar to the existing rates, then the charged rate is more than double. Even for other plans, the extrapolated interest rates are similar.

Though the credit risk is higher, the risk will not be on any RIL entity. It will be on the financiers’ books. 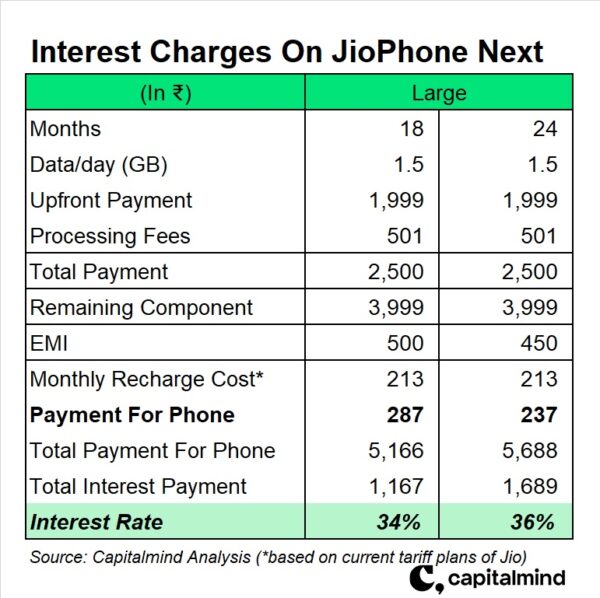 The phone seems to be better, for entry-level users, compared to its peer given the price point and features. The phone has a dual sim, but one sim is locked for Jio. And only that sim can be used for data services. 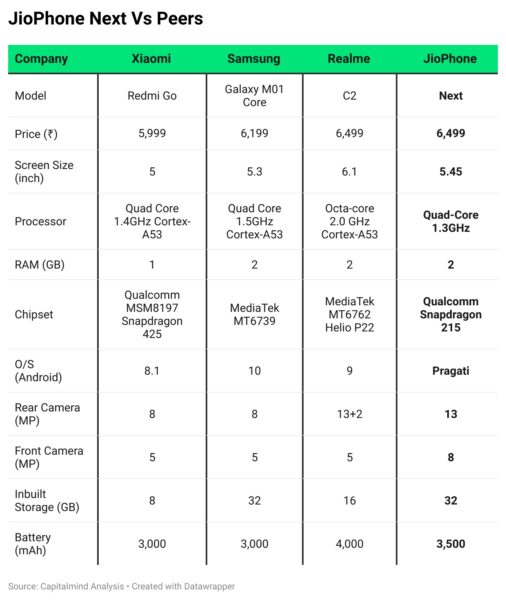 Airtel also in October launched back-ended cashback of ₹ 6,000 on more than 150 smartphones. To avail of the ₹ 6000 cashback benefit, a customer needs to recharge with an Airtel prepaid pack of ₹ 249 or above continuously for 36 months. The customer will receive the cashback in two parts – the first installment of ₹ 2000 after 18 months and the remaining ₹ 4000 after 36 months.

This offers seems to be relatively better for a customer on an overall basis compared to JioPhone Next. Not only the phones offered are better, but the scheme also provides free screen replacement in the first year. However, the only downside is the lock-in period of 3 years and the fact that if there is a tariff hike by Airtel then the overall cost would increase. In Jio, there won’t be a risk of a tariff hike for the first 24 months. 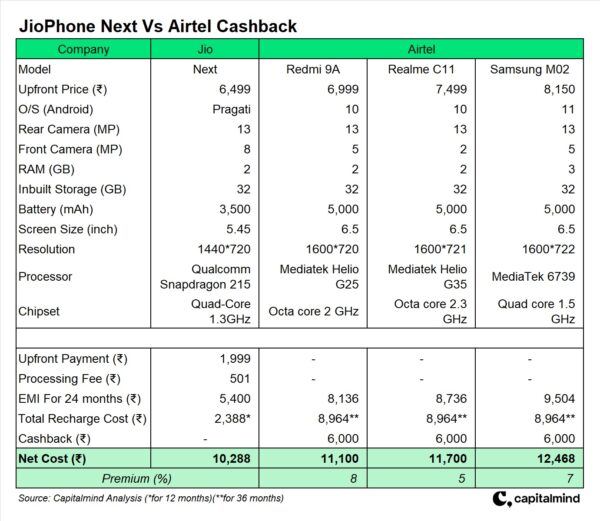 JioPhone Next isn’t just to poach users on other operators’ networks but to retain their own users. The new phone can help Reliance Jio attract the 28 crore 2G subscribers on Vodafone Idea and Bharti Airtel’s networks and will help to retain/upgrade the 11 crore JioPhone users. Thus, the addressable market is more than one-third of the total mobile users in India: 39 crore users. The phone will also be targeted towards low-end smartphone users who are looking to replace their phones. 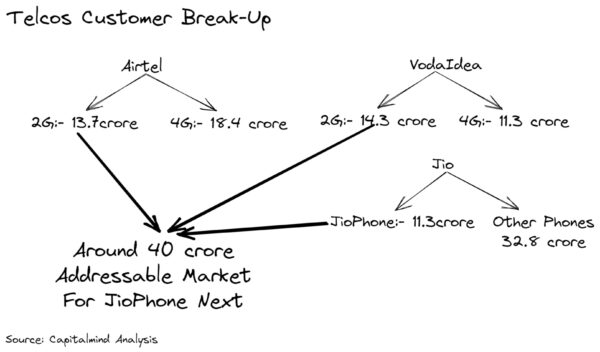 The launch of this new device, along with the existing ones, will allow Jio to dominate the price-conscious segment in both the feature as well as smartphone space.

The phone pricing is not aggressive, or a loss leader. It is highly unlikely that non-data users will have the ability to pay the upfront cost of ₹ 2,500 and high monthly EMIs. Thus, though the target market is large, most likely the company will end up converting its existing JioPhone users to JioPhone Next.

In past, the company has slashed JioPhone prices multiple times, which accelerated its acceptance. So if sales don’t hit expectations, Reliance could slash prices through various promotional schemes. The current pricing could also be on account of ongoing supply-side challenges and Jio might want to test waters in terms of acceptance.

On the positive side, the lack of pricing aggression from Jio is a welcome change (for its competitors) and it may prevent any meaningful disruption for other telecom operators. This lower aggression coupled with the management commentary of supporting price hike indicates that it’s likely there’s a tariff hike in the telecom industry. An overall tariff hike would also make the service prices of JioPhone Next much more attractive. 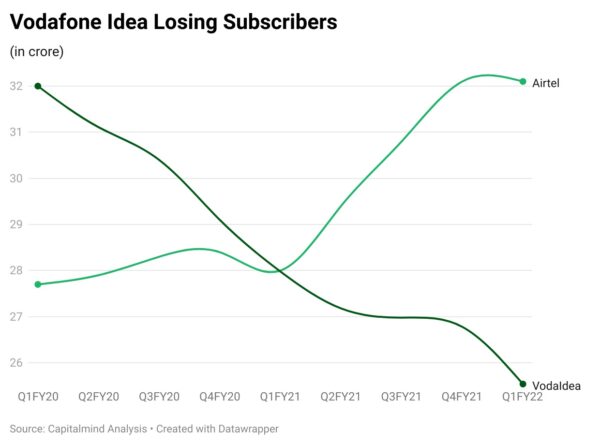 If JioPhone Next sees a strong acceptance among the low-end smartphone users, then to the impact on Bharti Airtel will be limited. This is not only because of Airtel’s cashback scheme offered on various handsets but also because the company over the last few quarters been able to increase its customer base and has successfully retained and upgraded its 2G users to 4G.

The risk is high for Vodafone Idea which has failed to arrest its subscriber loss. Given it’s limited ability to raise cash, Vodafone Idea will really have to figure out a way to stop the bleeding, especially if JioNext takes off.

Why Reliance is buying JustDial

This article is for information only and should not be considered a recommendation to buy or sell any stocks. Stocks mentioned may be part of Capitalmind Premium Model Portfolios.

For any questions, tweet / DM us on Twitter or email us at premium [at] capitalmind [dot] in.