A Happy and Prosperous Diwali 2021 to all of you from us at Capitalmind! Wish you success, luck and joy in the journey ahead.

At Capitalmind, we like to react, not predict. But once a year, we throw that rule into a drawer and let our minds run amok, from conspiracy theories to whatever Elon Musk is consuming nowadays, and try to frame a picture of what is likely to happen. But we have a special thing that people with predictions often do not do.

Scorecard for the 2020 projections

We always provide a summary of what we said last year and exactly how stupid we now sound for having predicted that. Last year, in our Diwali post 2020, we said a few things. Let’s see what that’s meant.

Inflation will be ugly for a couple more months and start to fall again next year once more. This will be led by a drop in the prices of food items. This will allow for more RBI rate cuts, but inexplicably they will hold on to rates for a while until they give up and start to cut. 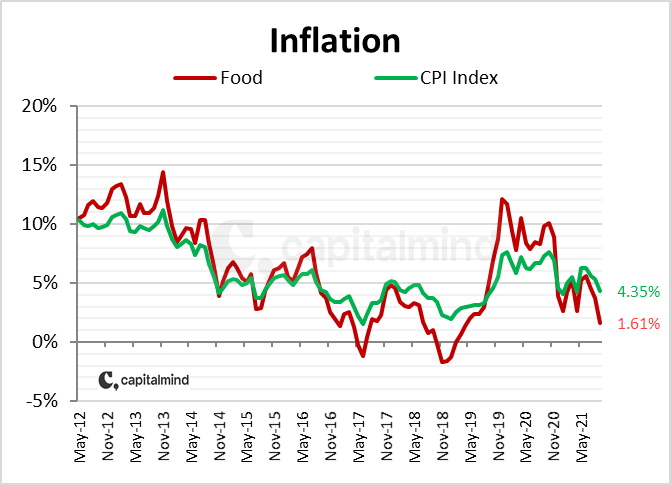 Economic recovery will be strongest in the US, and India will lag on this front. The west has a huge liquidity problem, especially Europe and Japan.

Economic recovery wise, I think the US just has done the best. This CNN Dashboard says that most US states are at 90%+ of pre-pandemic levels and some states even better, in terms of employment etc. But things like travel, small businesses and box office sales still lag.  India’s recovery is okay but nowhere as strong as the US – our diesel consumption continues to be 20% below pre-pandemic levels. Our credit growth is still 6%, and travel, leisure, and hotels are in bad shape.

There will be a war of some sort because when countries are antsy and come out of Covid, this will be their way to get people’s minds off the economy.

I think I’ve gotten this seriously wrong. I don’t think we’ve had a war of any sort (though there was aggression from China, the “liberation” of Afghanistan and all that), and the economy has recovered fast enough not to need distractions.

Indian markets and startups will see major interest due to the massive inflow from money printed in the west. Watch out for how much bigger startup funding numbers will get.

Oh, man. This is so good. I wish I could give myself more than 10/10. You can’t not see startups everywhere. Startups have listed despite not having a profit. Startups have raised INSANE money – Groww at $3bn valuation, Cred at $4.4 billion, Swiggy at $5.5 bn etc. And hey, the listed Zomato now is worth over Rs. 100,000 cr! There’s so much money chasing startups that you wouldn’t have any issues with my score on this.

Markets will see an all-time high. But we will also see another violent down move of at least 20%.

Markets have not even declined 10% since May 2020: pic.twitter.com/g9lLOxlT9h

Real estate will see a recovery, but it’s quite likely some large players resort to distress sales or a bankruptcy court to push a resolution.

Real estate did see a recovery. The performance is backed by lower interest rates and sops offered by developers. Both commercial and residential real estate saw a recovery. (Source)

But while I’ve heard of distress sales, I don’t think there’s been a large scale bankruptcy in the RE space (at least, not a big one that wasn’t already there last Diwali) SREI Infra is going bust, but it’s an NBFC, not an RE company.

Bank NPAs will be visible after January, and they’ll find innovative ways to hide them. Some of the smaller private sector banks will have to find capital or ways to merge between themselves.

There was definitely one innovative way: the Bad Bank (read our post). However, banks did not see more NPAs after Jan, even after the moratorium of declaring NPAs was lifted by the Supreme Court in March. (See RBI Financial Stability Report) Smaller private sector banks seem to be in trouble, with high NPAs in Equitas, Ujjivan and now Bandhan Bank. This will need some consolidation, but that’s not happening.

IL&FS will not see a resolution.

It hasn’t. It’s seen progress, with the group saying they have done about 52,000 cr. of debt resolution as of November 2021 (out of a total debt of 99,000 cr.) However, even with a 14,000 cr.+ bank balance, they haven’t paid back a single bondholder. This will still carry on for years. Also, it’s a liquidation, not a resolution – pieces of IL&FS are being sold as they can be, and eventually, money will be distributed. The liquidation process will continue in the next year.

The Index combination mentioned above will continue to be in the top 20% of (large-cap/large+midcap/multicap) mutual funds next year.

For the first time in many years, this has not come true. A rough combination in the last year is the Capitalmind Index portfolio at the Capitalmind Wealth PMS. (See PMS performance) This has only provided a 47% return in a year. This return isn’t enough to be in the top 20% of the large/large+midcap/multicap funds in the last year – in fact; it’s in the bottom 20%.

(This combination continues to be a topper in a three year range, but the active funds have won the last year. However, it’s a point to point issue.)

We have only a 61% score, which is not that great but greater than the 50% we should otherwise get. I know there’s some weasel language there, which allows us the freedom to give ourselves higher marks. But what’s life without a little lack of exactness in everything? (Bonus read: How to make a Brilliant and Useless Prediction)

Predictions for the next year

I hope that’s fuzzy enough to earn me more points next year. The best predictions are blurry, unclear language, which is not really my forte, but I’m learning.

Capitalmind in the last year

We have also done some amazing things in the year. The team has expanded (and not in the pic below are Soumeet, Nisha, Nihit, Harysh, Jay and Subhiksha). We’ve gone to 630+ cr. assets under management (and another big chunk in advisory). Both Capitalmind Premium and the Smallcases have seen enormous interest. The portfolios have done reasonably well in the last year with over 50% returns in most, but the market’s been kind too. We have also applied to set up a mutual fund with SEBI! 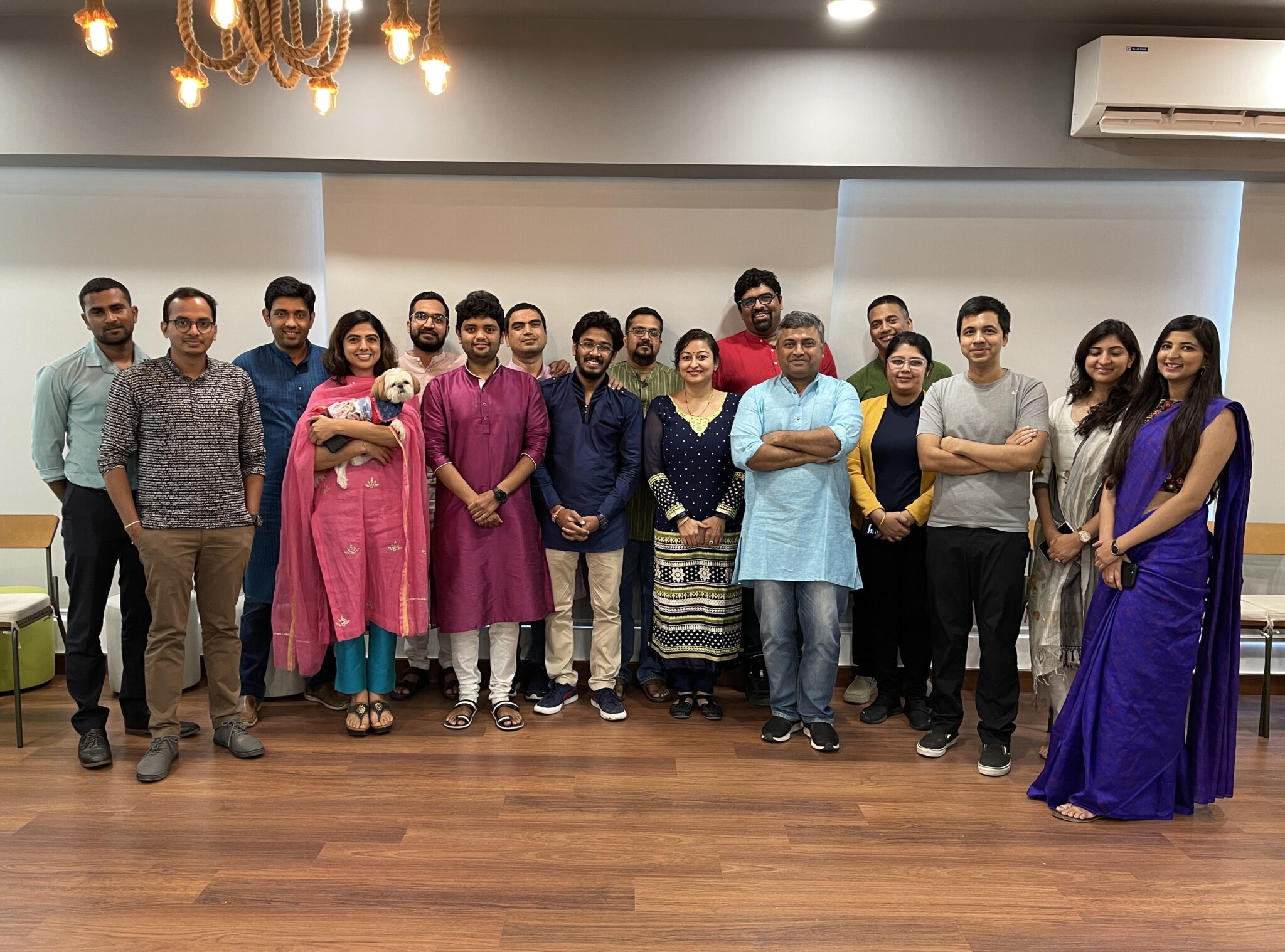 In the coming year, we have great things on the way. We would tell you, but then we’d rather do it and show you. After all, we don’t want to predict. We want to act and react.

We have a DIWALI discount!

We have a 30% discount on Capitalmind Premium and 20% on the smallcase subscriptions, just for a short period! And yet again, wish you a very Happy Diwali!