And I say, sure, Eminem. Let me take a stab at it.

The auction started at $100, went up to $1 Million within the first 10 minutes. And finally sold for a little over $69 Million. This auction was facilitated by Christie’s. One of the oldest & traditional auction houses in the world.

just setting up my twttr

Remember the Nyan cat gif, which was a viral meme in 2011? The creator of this GIF decided to celebrate its 10th anniversary by selling it as an NFT. Lo and behold, it was sold for ~$600,000.

These are the digital things people are purchasing for millions of dollars – literally.

To answer these questions, we have first to understand three terms – Non-fungible, Blockchain & Digital asset. These three combine to create an NFT. 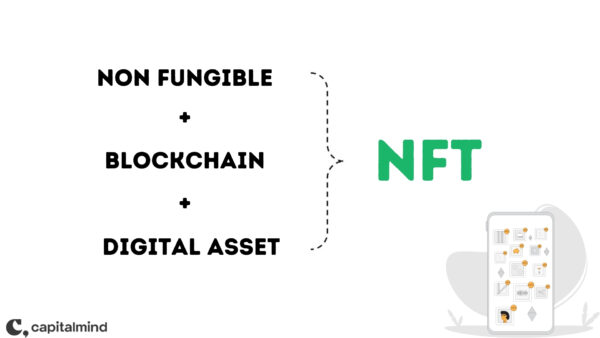 Non-Fungible means something rare, unique, irreplaceable, and collectible. It cannot be copied or substituted.

For example, items like Gold, Rupees/Dollars, Oil, Bitcoin, books, T-shirts, etc., are fungible. You can change one thing with the other, and you will have the same thing. They are mutually interchangeable.

These are unique & don’t have an alternative. Unsurprisingly, the non-fungible stuff is more valuable than the fungible stuff.

These are non-fungible things in the real world, though.

Now let’s take the same analogy to the digital world, with the help of ‘the blockchain’.

All thanks to the Bitcoin madness, most of you would be already familiar with this term.

Blockchain is a decentralized public ledger that can record & track anything of value. It is stored in the form of blocks and chain together to form a secure way of bookkeeping.

Think of it to be a shared database. It’s the same data with multiple copies of it. This distribution of the information will reduce the ability of data tampering & bring trust in the system.

For a new block to be added to the chain, a few things have to happen:

Since the ledger builds on each previous transaction, it becomes challenging to modify retroactively.

I strongly recommend you to go through this illustration by Reuters Graphics to understand the process of blockchain. 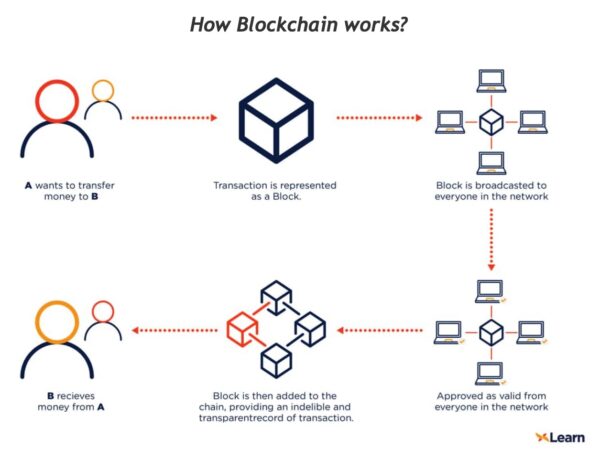 What is a Digital Asset?

A digital asset can be anything in any format that provides value to the owner. Companies rely heavily on digital assets for marketing & brand building strategies.

As we are becoming more digital, the physical properties or ideas from the physical world – like ownership, usage, and scarcity are also getting replicated in the digital world.

Now pause for a minute, and try to put together these three concepts.

If I have to put it in a sentence,

NFT is a unique (non-fungible) digital item that can be traded online using blockchain technology.

The technology behind NFT

Most of the NFTs today are a part of the Ethereum blockchain. It is the most widely used blockchain platform for creating and launching NFTs. The transactions happen using ETH coins.

As more people were transacting on the blockchain, it became hard to keep track of all these different contracts.

Standards like ERC-721 & ERC 1155 solve for it. They create traceability, verifiable ownership, all with zero human intervention.

In other words, these are a set of rules to ensure interoperability and compatibility with exchanges or wallets operating in the Ethereum ecosystem.

What do we use NFT for?

Collectibles are another essential application of NFT. Here are prominent examples of NFT collectibles:

NFTs in sports are gaining traction post the launch of the NBA Top Shot platform.

It allows fans to buy, sell & trade the official video highlights. For example, this dunk of LeBron James is going for $1Mn.

Less than a year after launch, the NBA Top Shot community had more than 12 million purchases. This year they clocked $750 Mn in sales.

The Right-click & Save problem

By now, you must have thought of the most obvious question. Why would I pay for something when I can download it for free?

There are three arguments here.

1) The pride of ownership

Have you heard of people buying land on the moon or gifting a star to someone? Of course, it may not mean anything in the real world. But it brings a sense of pride and gives the owner a bragging right to own something unique in this world (or beyond).

Owning NFTs is no different. They are as valuable as the market makes them be. If the seller finds it befitting, she will buy it. But, as they say, the value lies in the eye of the beholder.

As soon as we fulfil our basic needs, we seek more from the world around us. We are status-seeking creatures. The entire art industry is about the idea of people assigning a monetary value to a canvas or someone’s brush strokes.

This aspect of human psychology is slowly moving from the real world to the digital world through NFTs.

As you would have understood by now, all these NFT transactions happen on cryptocurrencies (mostly ETH). If you consider cryptocurrencies themselves as the first level of speculation, the trading of NFTs makes it a second level. So, in a way, there is no real money involved.

It’s some second-order speculation. I know this gets a bit woozy, and perhaps that’s what gives people a thrill.

There are many marketplaces (a.k.a exchanges) where we can buy & sell NFTs. These are decentralized platforms that allow you to store & trade non-fungible tokens. The marketplaces require users to have crypto wallets.

Platforms like OpenSea, Nifty Gateway, SuperRare, Rarible are some of the popular exchanges. These are universal marketplaces, where we can turn any digital item into a token & start selling them.

There are other platforms like Valuables, Glass Factory, etc., which focus on niche NFTs. For example, Valuables allows us to buy & sell tweets.

The sellers can have a fixed rate for the NFT or can opt for an auction.

The image below explains in a step-by-step manner how you can buy or sell NFTs. 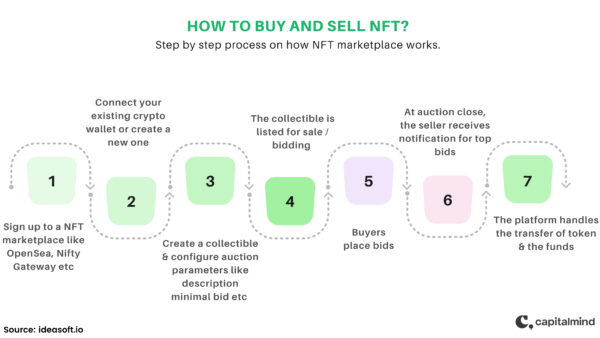 Gas is like transaction fees on the Ethereum blockchain. The exchanges will charge a fee for the computational effort involved in it. Gas prices are denoted in gwei (1 gwei = 10-9 ETH). These gas prices are dependent on the supply & demand of the miners.

NFT as a concept is novel & intriguing. Historically, people get excited about new technologies & push them to the extreme. Then, they pour in billions of dollars only to witness the bubble burst.

On the flip side, NFTs are genuinely pushing us to think differently about the digital world. For example, how do we validate ownership? How do we verify an object’s authenticity, especially in a virtual context?

NFTs, in a way, help in bridging the gap between the digital and physical worlds.

Everything is getting virtual. Money is virtual. Art is virtual & who knows, land may also become virtual in the future.

The day may not be far when we have a parallel digital world. Every human may get to lead two lives — one in the physical world & the second in the virtual world, as in a metaverse.

Building houses, cultivating food, buying assets (already there), have relationships in that parallel world may become common. Does it sound like a sci-fi movie or an augmented reality game? And what if Elon Musk is true & we are indeed living in a simulation?

We never know when this bubble will burst, or is it even one in the first place? But, one thing is for sure. We are living in the craziest of times ever.

A decade down the line, NFTs may turn out to be a short-lived fad. But the adaptability & the widespread usage of the technology on which it is based could indeed explode.

I better stop now before either of us loses our sanity. Hey Eminem, I hope you got your answer.

Needed an extra espresso shot with my pour-over after all that. True story.

India's biggest and most honourable ragpicker is here. It's the "Bad Bank", to be known, in traditionally uncreative Indian public fashion, National Asset ...