What’s common between the years 2007, 2010, 2017 and 2021? All of them Bull Market years. And far from coincidentally, all of them saw a spate of IPOs as companies rushed to cash in on record-high stock prices.

The boom, fuelled by a tsunami of cash unleashed by central banks and the rise of individual investors, eager to buy a piece of their favourite companies.

But did you know that 1 in 4 companies that went public in the 2010 boom does not exist anymore? And that more than a decade later, 1 in 2 of those companies is trading below issue price?

2021 is already slated to become the biggest year for primary markets in terms of fundraising.

We looked at data on stock performance of companies that went public in past bull markets, to see if there are any lessons for investors subscribing to 2021 IPOs.

IPOs serve two major purposes – bring capital for growth and provide an exit to promoters/early investors. The IPO market is highly cyclical and largely in sync with the fortunes of the secondary markets. This is clearly visible in the following chart that when markets are doing well the number of IPOs and amount of funds raised is much higher. The year 2007, 2010, 2017 and now 2021 are prime examples. 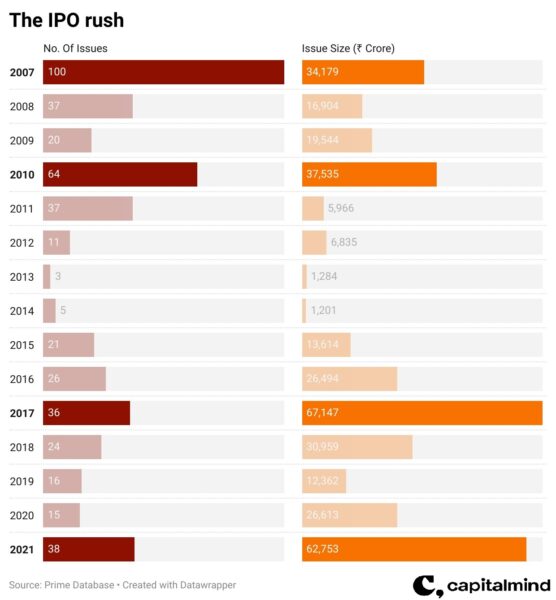 Where The Funds Are Going?

Now of the total fundraise in 2021, nearly three-fifths were taken by the promoters and private investors. This means that nearly 60% of the funds raised were via an offer for sale. The trend is similar to the previous few years. 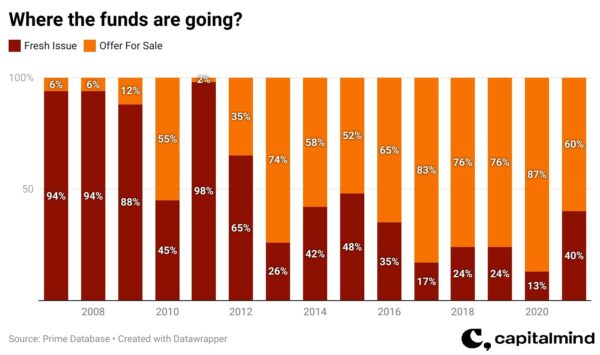 Of the 100, that listed in 2007, nearly one-third of them have stopped trading on the exchanges, while one-fifth of them are down over 80% to their respective issue price. HDIL which was a prominent name back then is down about 99%, while Vodafone Idea (formerly known as Idea Cellular Ltd.) which was listed in March 2007, is down about 90%.

Among the remaining, 30 stocks continue to trade above their issue price.

Though the number of companies listed on the exchanges in 2010 was lower, the funds raised were higher than in 2007.

26% of the companies that were listed in 2010 have stopped trading on the exchanges, while 28% of them are down over 80% to their respective issue price. Ashoka Buildcon, MOIL, and Coal India are among the few prominent names listed in 2010 and continue to trade below their issue prices.

On the flip side, only 17 stocks are in green and of those only five have managed to beat the index in the same time period. Since the start of 2010, the Nifty 50 index has risen 230%.

The number of companies that raised funds was nearly half, while the amount raised was nearly double of 2010.

For 2017, the ratio is in favour of gainers as 23 of them are trading above their respective issue prices. Also, there are only three companies – Future Supply, Bharat Road Network, and S Chand & Co. – that are trading down over 80%.

Though the gainers are more, only eight stocks have managed to beat the index. Since the start of 2017, the Nifty 50 index has risen 110%.

This year most of the stocks managed to beat the index – 22 of the listed 36 companies. While only eight companies are trading below their issue price. Now, that is because most of them are listed at a higher premium. However, if we compare, the current share prices of these listed companies to their respective listing price, then we get completely a different picture.

Only 10 companies managed to beat the index, while the number of companies that are trading below their listing price is 17. 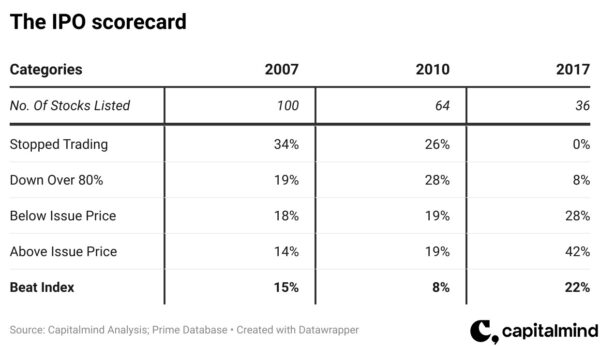 The above table clearly shows that the probability or chances of gaining more than the index, only by investing in IPOs, is very less. One can choose to play the listing day game – applying and selling on listing day at a premium. Even in that, not only one has to be lucky to get an allotment, but the odds are also slightly unfavourable.

60% of the companies listed in the last 15 years, have not generated returns of more than 10% on listing day.

Since 2007, 456 companies have conducted IPOs on the Indian bourses. Of these, 125 opened lower compared to the issue price, while 29 of them opened flat. Among the remaining which opened higher, 117 opened only with gains of up to 10%.

Thus, it can be safely said that IPOs are blind bets. 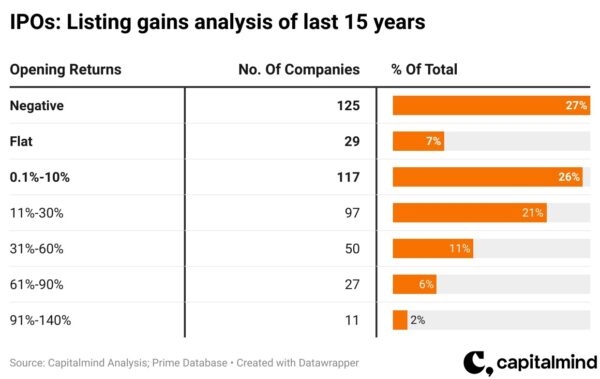 Does this mean one should avoid all IPOs in general?

There have been massive winners from the IPO market. Those stocks have not only put up strong gains on listing day but even post that they have continued to rally. To name a few – Page Industries, Jubilant Foodworks, Astral Poly, V-Guard Industries, and others. Careful stock selection is the only way to generate market-beating returns. And this can be done even post listing as the same will give time to analyse the stock. 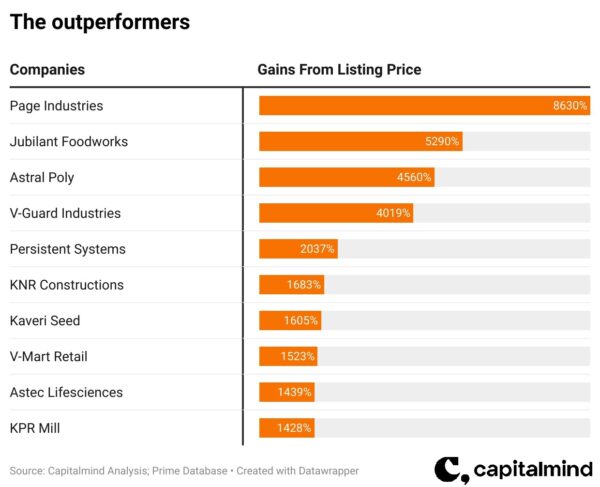 Does that suggest the IPO rally is stuttering?

As long as the stock market is rising, the flow of IPOs is unlikely to dry up, and total proceeds this year are on track to eclipse the record of ₹ 67,147 crore set in 2017. It just seems that, with so many companies rushing to market, investors are being picky and reluctant to pay steep valuations demanded by the fast-growing companies that crowd the IPO market.

Lastly, according to the SEBI website, nearly 40 companies have filed their draft papers with the market regulator – SEBI – for an IPO and are at different stages of approval, while 13 have already received SEBI approval for an IPO and could launch the same in near future.

For now, the IPO rush will continue.

For comments and questions, reach out to @soumeet_sarkar and @capitalmind_in

This article is for information only, and should not be considered as a recommendation to buy or sell any stocks.