To save the dire situation of one of the telecom operators, the Government of India announced a slew of reforms today. In a press conference, Ashwini Vaishnaw, Minister for Communications, said that the Cabinet Committee has approved nine structural reforms and five process reforms for the telecom sector.

In this post, we dwell upon the important announcements and their impact on the industry. And obviously, try to answer the most frequently asked question: Will Vodafone Idea survive?

As anticipated, the Government of India announced four years moratorium on past AGR and spectrum dues. The moratorium will start on October 1, 2021.

However, there has been no extension when it comes to the final due date of payment. This means that the final due date to clear all past AGR and spectrum dues still remains the same. So earlier, a telco had to pay the AGR dues equally over a period of 10 years. Now, the telco will not have to make any payment for the first four years and then clear all the balance dues in the next six years equally. The same logic applies even for the spectrum dues.

Telecom companies opting for this moratorium will have to pay interest on the accumulated dues at MCLR+2%. The government has also now allowed the option to pay the interest amount arising due to the said deferment of payment by way of equity. Government to exercise the option to convert the due amount into equity at the end of the moratorium period. The Finance Ministry will finalise guidelines for such conversion.

This move (4-year moratorium) will ensure Vodafone Idea’s survival but will not guarantee a revival. 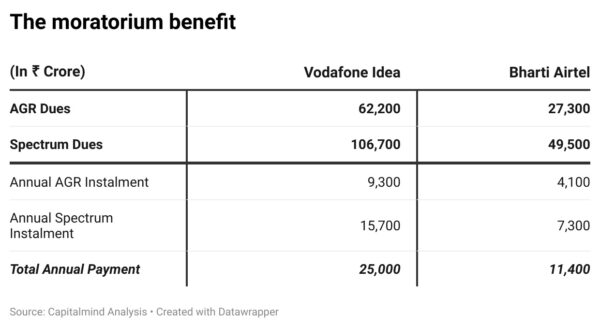 Even in FY20, the government had announced a two-year moratorium on spectrum dues. However, the same has failed to ensure a revival of Vodafone Idea.

The current one-year MCLR rate is 7%, which means that the interest rate on the moratorium will be 9%. Vodafone Idea will opt as it does not have an option, while we do not expect Bharti Airtel and Reliance Jio to opt for the same as the interest rate is too high.

Telecom operators are liable to pay around 4% and 8% of the AGR (adjusted gross revenue) as spectrum usage charges and license fees, respectively, to DoT. To calculate AGR, telecom operators are asked to include all revenues earned, i.e., from telecom services and from non-core telecom operations – rent, profit on the sale of fixed assets, dividend, interest income, etc.

Today the government has said that going forward AGR definition will not include non-telecom revenue. However, the benefit of the same will largely be nothing as the telecom companies have reorganised their businesses to avoid including non-core revenues.

Earlier a delay in payment of license fees and spectrum usage charges used to result in interest, penalty, and interest on the penalty. However, from now any delay in payment will only attract interest at MCLR+2% instead of MCLR+4% and would not attract any penalty.

Earlier, the useful life of a spectrum was 20 years which could be extended by another 10 years. However, from the upcoming spectrum auction (most likely the 5G auctions), the useful life of a spectrum will be 30 years. Moreover, it will have a lock-in of 10 years, post which an operator can surrender the same by paying surrender charges. This is a big flexibility given to the industry prospectively and should encourage telcos to bid for 5G spectrum auction.

The government also liberalised the foreign ownership rules. In the telecom sector, 100% FDI was allowed but only 49% was through the automatic route. From now, 100% FDI through automatic route is allowed in the sector with safeguards.

Also, the reforms related to bank guarantees and spectrum usage charges are prospective in nature. This will benefit and encourage telecom operators to participate in future spectrum auctions – 5G. None of the companies will have any immediate cost savings. Airtel and Jio are expected to benefit the most from these reforms as they are the main contenders to participate in the 5G auction.

The four-year moratorium is the only reform that ensures that Vodafone Idea will survive. Even the prospective reforms announced today do not guarantee a revival of Vodafone Idea. This is because the cash flow mismatch will still continue.

Vodafone Idea’s annual cash EBITDA is expected to be around ₹ 5,520 crore (Q1FY22 annualised for the year), while its capital expenditure requirement is around ₹ 7,000 crore. Moreover, it will need cash, to make an interest payment on non-government dues, repay NCDs, and renew bank guarantees.

Moreover, opting for a moratorium would also lead to an additional annual cash outflow of ₹ 2,250 crore. 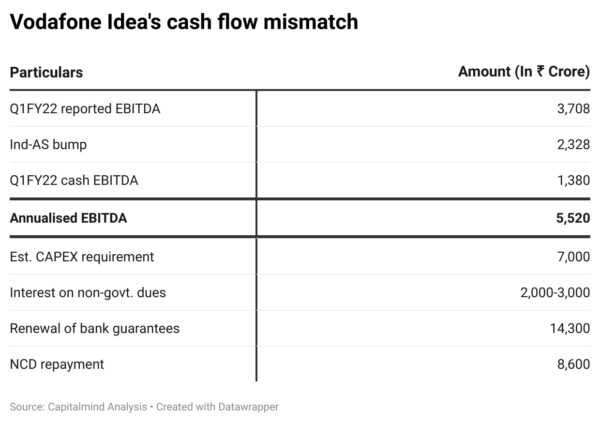 For revival, the company needs to arrest its continuous subscriber loss and a tariff hike. Apart from this, it also needs a large fund infusion. Now allowing 100% FDI through automatic route paves the way for it. But the question still remains, why will any investor invest in Vodafone Idea?

Further, 5G auctions are likely to happen at the end of FY22, and if Vodafone Idea fails to raise its cash reserve, then it will not be able to participate. Something similar to what happened with Aircel, Tata Teleservices & others during the 4G spectrum auction. Thus, the chances of the telecom sector becoming a duopoly is still high if Vodafone Idea fails to turn around its core operations and generate enough cash.