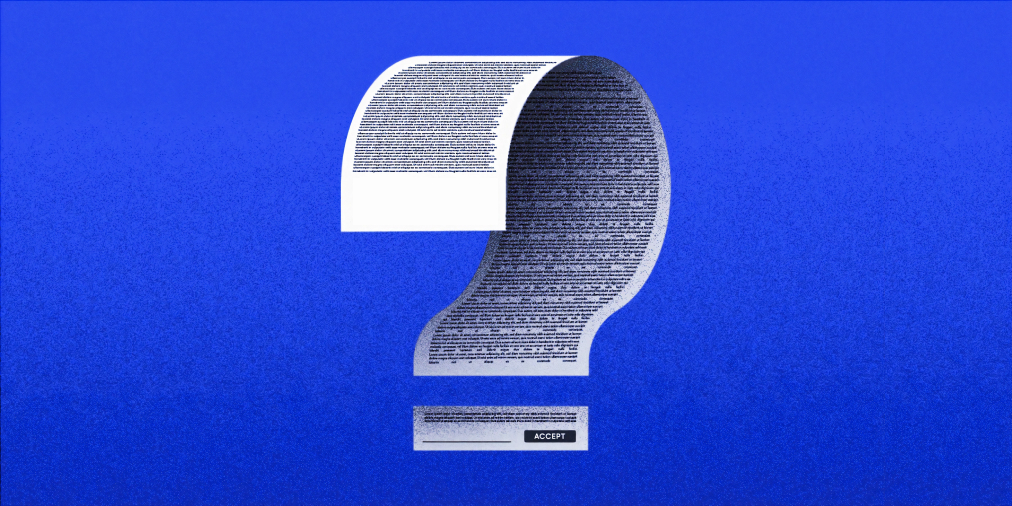 An unfavourable verdict of a two-decade-old legal battle between India’s mobile operators and the Government of India has put one of India’s oldest telecom operators in a fix. Yes, we are talking about the merged company – Vodafone Idea Ltd.

The share prices of the Vodafone Plc and Kumar Mangalam Birla controlled entity have halved in value since the start of the year while that of its peer – Bharti Airtel Ltd. – has grown 15%. In the ongoing week, the share prices of Vodafone Idea have fallen over 28%.

Even before the unfavourable outcome, the company was failing to keep up with its peers.

In this post, we dwell upon what led to all this and what lies ahead for the telecom operator.

To withstand the onslaught of cheap data rates and free calls introduced by Jio, the two separate wireless carriers in 2018 – Vodafone India and Idea Cellular – joined hands. When that was not enough, the promoters of the merged entity also infused funds. However, nothing worked.

And now they are done throwing good money after bad.

Slow Death After a Mega-Merger

The Vodafone Idea merger was completed in August 2018. Since then, the telecom operator has been bleeding customers. In the last three years, it has lost more than 17 crore active subscribers, from about 43 crore subscribers to 26.

A tariff hike was a solution for growth, but even that failed only for Vodafone Idea. The company could not report substantial growth in its revenue despite a 30% tariff hike taken in December 2019. 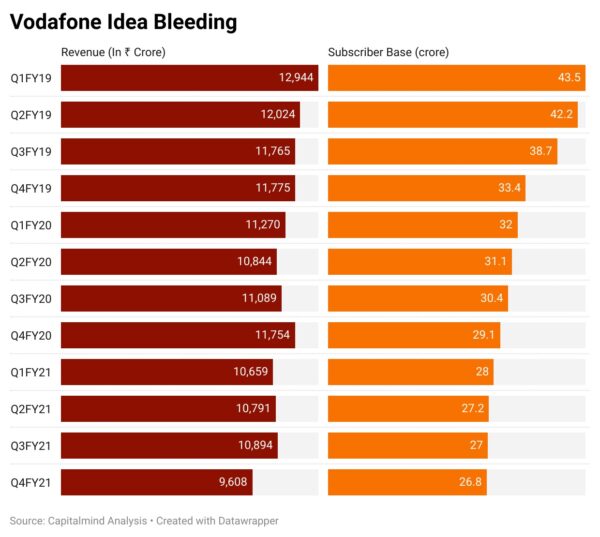 The argument was on what to include and exclude while calculating AGR.

Operators thought only receipts from core telecom services were to be included, but the Department of Telecommunications wanted a piece of other revenues as well, i.e., from rent, dividend, and interest income to profit on sales of fixed assets. India’s Supreme Court upheld the government’s demand in October 2019, putting Vodafone Idea on the hook for ₹ 58,300 crore.

Once this outcome was done, the operators continued their plea to rectify what they say are errors in the government’s calculations and for staggered payment. The court did allow staggered payout as the operators were incapable of paying thousands of crores as dues and penalties at one go. Because of this, Vodafone Idea did avoid bankruptcy last year, but its viability is again in doubt as recently the apex court rejected the rectification plea.

How did Airtel & Jio avoid this?

As a new entrant, Reliance Jio has dodged the missile of past AGR dues to the government. Also, by keeping a lid on data prices, Mukesh Ambani’s telecom arm continued to gain market share which made it profitable. And on the back of this, it is now armed with equity from Facebook Inc. and Alphabet Inc., and many others, in a company which is effectively the parent of the telecom company (i.e. Jio Platforms, the parent Reliance Jio Infocomm, the telecom operator)

For Sunil Mittal’s Bharti Airtel, finances were tight. But a successful equity raise, divestment of stakes in other businesses, and no loss in subscriber base helped tide over these difficult times. Promoters too have added more money. More importantly, Bharti Airtel took a conservative stance and added provisions to their accounts (took the losses earlier) against the high AGR demand.

Vodafone Idea did not provide. This is why the loss has to be taken now, and it’s hurt them heavily.

As of March 31, 2021, the total debt of Vodafone Idea stood at ₹ 1.8 lakh crore which is equal to the market capitalisation of India’s largest steel company – JSW Steel Ltd.

Of this towering debt of ₹ 1.8 lakh crore – nearly 87% is owed to the Government of India. Of the remaining, according to media reports, among banks, the telecom operator owes a large chunk to SBI, Yes Bank, and IDFC First Bank. 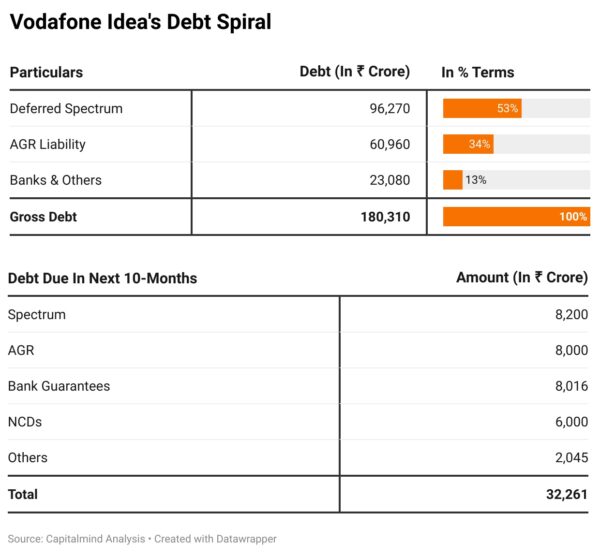 Now according to the data compiled by Capitalmind, over the next 10 months, liabilities worth ₹ 32,000 crore are due. Half of it is due to the Government of India, while the remaining is to banks and bondholders (NCDs).

This goes without saying, that the company is in no position to pay these dues. According to the CARE Ratings – which has given a B+ rating to its NCDs and bank facilities – bonds worth ₹ 6,000 crore are up for maturity from December 13, 2021, to February 14, 2022.

The banking system is relatively safe in this case – the impact is only 23,000 cr. but spread across banks, mutual funds, and the like.

What is Vodafone Idea trying?

Other than planning to file a curative petition with the Supreme Court for recalculation of AGR dues and asking the government to extend the moratorium on spectrum liability, the company is banking on a host of other options.

It has already taken shareholders’ approval to raise ₹ 25,000 crore via equity and debt. Vodafone Idea is also planning to raise ₹ 3,000 crore through the sale of assets including surplus land acquired to set up data centers. It has pending tax refunds of ₹ 6,800 crore and certain GST refunds which may be realised in due course. Also, it may receive an amount of ₹ 6,400 crore from the parent – Vodafone Plc. by June 2022, linked to actual AGR payment and certain tax refunds.

A combination of successive tariff hikes, government relief measures, an equity infusion by promoters or a strategic investor, a solution to the massive subscriber loss and any potential surrender of the unused spectrum to reduce future liability seems to be the only route to ensure survival for Vodafone Idea.

Will VI be able to raise equity?

It’s very difficult. Because the first thing the money will be used for is to pay the government. When you invest in a company, you want the company to use the money to grow. But here, all the company will do is pay the government the AGR dues, and that too for a long time. In the March 2021 quarter, it made ₹ 9,600 crore in revenues but spent ₹ 10,000 crore even before accounting for finance costs and spectrum charges. That means even before paying the government, it’s making losses.

Consider also that Vodafone (UK) has refused to invest anything more in the Indian arm (other than some pre-agreed amount) and the Birlas (promoters of Idea) have offered their stake to the government, which may be an indication that they won’t be infusing funds either. Kumar Mangalam Birla, the head of the Birla family involved, stepped down from the board of Vodafone Idea as chairman yesterday.

When the promoters themselves don’t invest in the company, why would a third party do so?

What about a buyer for the company? Why would you buy this company only to have to keep paying the government massive amounts of money that wasn’t your problem in the first place? Even if you did turn out a profit, nearly all the spoils will go to government coffers for a long time. Plus, we think that even buyers will wait for an end-game – either a relaxation of rules or a bankruptcy.

Can Vodafone Idea file for Bankruptcy?

Bankruptcy is a likely solution for VI, because this is exactly what bankruptcy resolution is meant to do. If Vodafone Idea were to go through bankruptcy, then everyone including the banks and the government would have to take a haircut. In lieu, they can be given a stake in the company, which may then be able to revive itself without the heavy burden. Bankruptcy means a new promoter can come in – either a foreign or Indian one – and take over the assets.

In such a case, we expect shareholder equity to go to zero, meaning: if there’s a bankruptcy resolution, current shareholders are likely to get nothing.

This means we’ll have to wait till December 2021, when some of the bonds/NCDs come due, for someone to be able to file a bankruptcy petition on Vodafone Idea, if the company does not pay up. (Around Rs. 1,500 cr. is due in December) We’ll have to see if, by then, there’s enough of a rescue package available. Otherwise, what seems difficult now (a bankruptcy filing) will be the only solution.

There’s also the impact of a bankruptcy filing on the Birla group in terms of fund-raising in the debt markets. India follows a horrible but accepted tradition of giving higher credit rating to companies because ‘oh it’s backed by this great family’. This means even lousy, badly run or mismanaged companies get to raise money at attractive rates because they have attractive surnames in their promoters. The Vodafone Idea case may be the first time this age old tradition gets a long-due questioning. What it will result in, of course, is that the debt market will treat all Birla companies with a different eye.

What Happens Incase Of A Shutdown? Who Benefits?

Let’s assume Vodafone gets the red flag and has to leave the field. Its problems are too many. To list out some…

The telecom sector is most likely moving towards a duopoly and Bharti Airtel and Reliance Jio would stand to gain. Vodafone Idea currently has close to 24.7 crore subscribers. 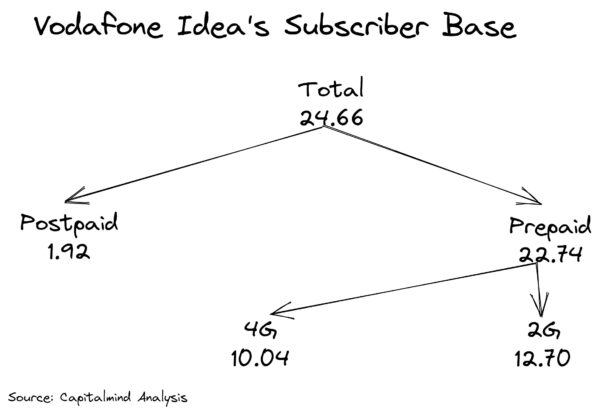 Vodafone Idea’s shutdown will also impact India’s largest tower company – Indus Towers. Vodafone Idea is estimated to contribute nearly 35-40% to Indus Towers’ topline. Not everything of this will be zero as the remaining service providers would require incremental towers to service new users. But there would still be a significant impact on the financials.

It looks pretty difficult that all these factors together would work out for Vodafone Idea. Even if they do, then attractive pricing of JioPhone Next which would most likely make it a popular entry-level choice could renew Vodafone Idea’s struggle to retain customers. Even if it can keep the lights on for a while longer, how will it pay for 5G spectrum?

However, whatever be the case, Bharti Airtel and Reliance Jio would stand to gain.

Possibility One:- Vodafone Idea shuts down

Possibility Two:- Tariff Hike across the sector, or a Floor Price

Outcome: Airtel and Jio will follow suit which will improve their financials as well, since they are now operationally profitable.

Outcome: The aid will be applicable to Airtel and Jio as well. For instance, last time government provided a 2-year moratorium on spectrum payment which benefited Airtel and Jio also.

Vodafone Idea’s fate hangs by a thread, and while everyone seems to be looking at the government to help, we believe bankruptcy-based resolution might be the only way ahead. It is only fair that everyone should take haircuts, not only the government.