Reliance Industries Ltd. – India’s most valued company recently lost a legal battle to the 4th most valued company in the world – Amazon Inc. The Supreme Court of India upheld an emergency order that Amazon had obtained from the Singapore International Arbitration Centre (SIAC) in October 2020 restraining Future Group from selling its assets to RIL.

The decision would be a setback for India’s richest man – Mukesh Ambani, but does RIL have a lot to lose if the deal does not go through? What about the Future Group?

When Did It Start?

In August last year, RIL’s retail division – a company called Reliance Retail Ventures Limited or RRVL – announced the acquisition of Future Group’s retail assets. This literally meant “we’ll buy what you own, but we won’t buy you”. The concept was that:

Effectively what would be left in the Future group would be an entity doing some wholesale business, and Future Enterprises would continue to be listed. However, the retail businesses – the brands (like Big Bazaar), the logistics and the real estate – would be sold to Reliance Retail Ventures.

This was done to comply with the Indian regulations, where FDI restrictions do not allow foreign companies to own businesses operating in multi-brand retail. The agreement also gave Amazon a call option to buy into promoter holding in Future Retail, if permitted by the law, and the option was exercisable within a 3–10 year period.

As per Amazon, it had contractual rights that included the right of first refusal, a non-compete pact, and a list of 30 companies with which Future Group could not transact. Future Retail had, according to Amazon, violated this by entering into a deal with Reliance Retail Ventures.

In March 2020, Future Retail ran into a severe cash crunch when India went into a lockdown to curb the coronavirus outbreak. In May, Amazon was to consider increasing its stake in Future Retail, according to media reports. But no such transaction materialised quickly, and Future Group had to cut a deal with Reliance, which infuriated Amazon.

Though there are restrictions on the level of investment that Amazon could have in Future Retail, a structured transaction alongside a financial investor could have been possible. Earlier, Amazon had acquired More Retail from Aditya Birla Group, with Samara Capital owning 51% stake and Amazon 49%. A similar deal would have paved the way, but the same did not happen.

And now Amazon is trying to fight its way back, as Future Retail is one of the prized assets. The stance taken by Amazon shows Future Retail’s importance for Amazon as Big Bazaar stores are serving customers in cities like Mumbai & Bangalore for same-day or even two hours delivery. Future Retail also has a designated area in the stores for Amazon. The acquisition would have also increased Reliance Retail’s dominance over India’s estimated $1 trillion consumer retail market.

Reliance isn’t buying the Future group companies (many of whom are listed). There’s good reason for that – buying a company means making an open offer to all shareholders which can significantly increase the price.

And then, the Future Group companies are very complex. They have gone through multiple demergers and mergers, and there are cross liabilities between the group, promoter owned entities and third parties. To unravel this can take a long time. Plus, any negative surprises (“Oh, you also owe X to company Y?”) will scuttle the deal. So instead of buying the companies, buy the assets themselves and leave the liabilities with these companies.

Also, the public companies are not the full picture. The listed Future Retail does a lot of transactions with entities controlled by promoters or management. Example: Rivaaz Trade Ventures Private Limited, which owns the real estate which is rented out to the malls run by Future Retail. (See credit rating report) Some of these companies have a massive amount of debt, acquired to buy those properties. This debt is in trouble – for example, Rivaaz has already defaulted on the debt.

Buying the listed companies (like Future Retail) is not the whole thing – what a buyer would want to do is to also buy the private companies that own the real estate etc. What Reliance said was: We want all of this, but we don’t want any of liabilities. So the deal is for Reliance to take over the assets, some of the debt but leave the rest with the Future group under FEL.

What’s At Stake For Reliance Retail?

To be frank, obviously, the deal would have bolstered RIL’s footprint. But for the same to happen, ‘timely’ execution was the key. When the deal was announced, the acquisition of Future Groups’ retail and wholesale business would have boosted RIL’s revenue, store count, and retail footprint by 29%, 15%, and 80%, respectively.

The deal when announced would have taken 6-9 months to complete. If the deal is supposed to go smoothly, companies usually start the integration process. However, in the case of the RIL-Future deal, as Amazon had opposed the deal, the integration process never started. Future Group which was already going through a cash crunch continued to face severe operational and financial difficulties.

The Groups’ stores started to close due to non-payment of rent and it also faced a severe supply chain crisis due to huge outstanding vendor payables. As a result, it had restricted inventory to private label brands. Store closures in the case of Future Lifestyle were limited.

On the other hand, RIL’s retail unit gushed with cash from new investors, continued to expand its footprint even during covid. Because of these divergent trends, the gap between RIL and Future Retail’s grocery and apparel revenue widened further.

In the last five quarters, RIL added close to 1,600 stores, i.e., close to 7 million square feet. With Future Group seeing several store closures, especially in Future Retail, now the incremental acceleration to Reliance’s store addition provided by Future outlets, if the deal was successful, would be relatively small, especially as Future has scaled back its business significantly in the small-format stores.

This reiterates our belief that the strategic appeal of Future Group’s assets to Reliance Retail has potentially diminished. RIL would now be better off without the Future Group deal. 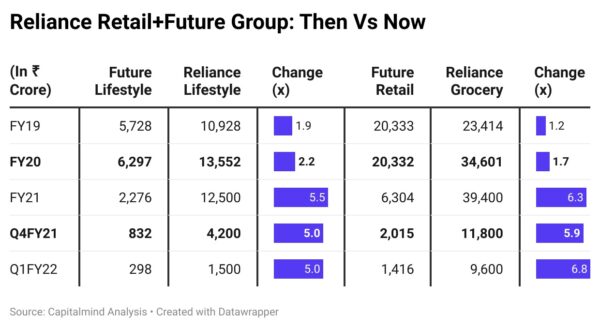 The ball is now in the Singapore Tribunal’s court, literally. They might say listen, Future can’t do this deal. Then the tribunal decision gets challenged in India. It can take years to reach a decision. Meanwhile promoter companies which have debt may see insolvency filings in India, which might see the retail estate sold through a liquidation process.

The tribunal might still allow a limited version of the deal to go through, but with conditions. For example, they may say that indeed, Future Retail should allow Amazon the ‘right of first refusal’ immediately, on such a deal. Under Indian laws, such a right cannot be exercised by Amazon. Therefore the deal will be refused by Amazon, and then Reliance can still go through with it.

There are endless possibilities, but none of them favourable to the Future group. Let’s take the different end-games.

If the deal goes through, then the Future group will survive, but as a shell of its former self. With all the retail assets gone, it will be valued at a lot lower than it is today, but it will have lower consolidated debt. However, it would be important to see if the deal now happens at the originally decided value or at a lower value. As the operations have scaled back, the deal could be re-negotiated.

Amazon along with other large investors can infuse funds that will be used for repaying Future Group’s debts. Once the debts are paid, further fund infusion can be done for growth. Even in this case, Future group will survive. However, the fund infusion would take time, at least 6-7 more months, and will have issues – from resistance to Amazon getting ownership of retail assets, to the private promoter companies being brought into the picture.

According to media reports, if the RIL deal is not concluded or if there is no other fund infusion by December 2021, then the lenders will be forced to consider an insolvency filing. Future Group companies are required to make their first bullet repayments in December.

If Future Group was to go through bankruptcy, then everyone including the banks would have to take a haircut. In lieu, they can be given a stake in the company, which may then be able to revive itself without the heavy burden. Bankruptcy resolution means a new promoter can come in – either a foreign or Indian one – and take over the assets.

Everything now depends on the final verdict of the Singapore Tribunal, which has heard both the parties, and a final order is expected in the next few weeks. However, till then, Future Group’s fate is hanging by the thread.

As for RIL, the opposition by Amazon appears to be a blessing in disguise. With or without Future Group assets, Reliance Retail continues to remain the retailing leader. During the pandemic, RIL had an excessive focus on e-commerce, even while brick-and-mortar expansion continued. The company will continue to focus on research, design, & product development, sourcing ecosystem by partnering with producers, MSMEs, service providers, and others, supply chain infra by linking all major sourcing and consumption locations, expanding store footprint multi-fold in FY22 with co-located delivery hubs over next few years, and mergers and acquisition.