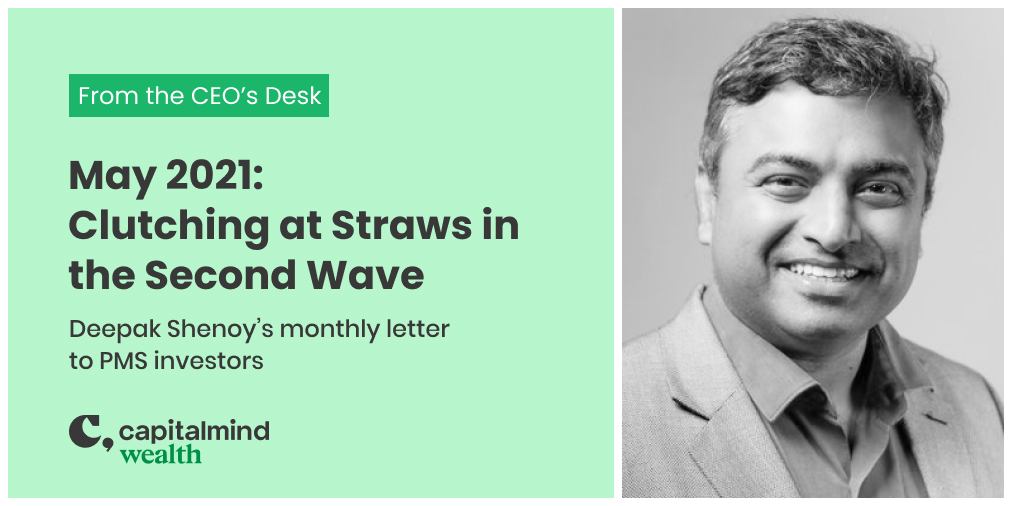 The Covid has changed a lot of things. You can actually see how much it has changed by a few graphs that I’ll now proceed to show. But let’s look at it as three parts:

The Second Wave Has Locked Us In Strongly

Google mobility trends, captured in this chart in the NSE Market Pulse report, shows us the damage, the recovery and how the system has hit us badly the second time. 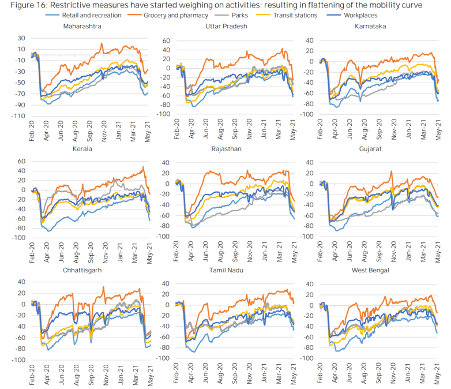 While everything went down equally in the first series of lockdowns, the fastest to recover, everywhere, was grocery and pharmacies. And even that has been hit hard in the second wave. Workplace traffic has been consistently below the Feb-20 baseline in almost all states – and has again dipped (understandably). Mobility into retail stores has been the worst hit and continues to be horribly down.

People aren’t moving about and it’s already mid-May. This will be yet another year of damage in the economy, because if people don’t go out, don’t buy things in shops (which were more than 90% of the retail economy) it’s going to be another rough year.

But there’s also the hope that when it does recover, the world of revenge shopping will be upon us.

And then, it appears that the locking down of the economy means more of us are sitting at home. There’s nowhere to spend, really. No restaurants, no travel, no meaningful spend on petrol, and definitely no holidays.

And fixed deposit rates are horrible. So the excess discretionary spending is all going into….the stock market:

Individual investors have not been a bigger part of daily trading than the currently 45%, for as long as I remember. The benefits go entirely to the stock markets, which have risen spectacularly even as everything else in the ‘real’ economy has been hit hard.

(Read: OMG, the retail investor is the largest player in the markets)

Higher frequency indicators show a drop from March to April and some of it quite dramatic. From lower vehicle sales, to much lower work provided to NREGA households, to a moderation of growth in e-way bills, exports and services. 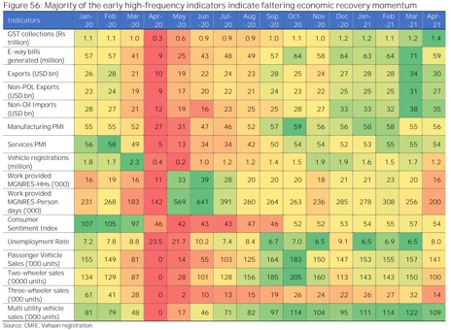 The beneficiary has been the large listed corporate

The small companies seem to have been hurt the most in the last year, as their bigger competitors, the better funded, stronger listed companies have flourished. Take a look at the non-financial sector in the last 12 months:

The profits are even bigger – full year profits of the non financial companies (listed) are up over 80% on aggregate, compared to the year earlier.

Fund flows to the market are immense:

Largely, the upper middle class, and the high-networth Indian. This is because they had safety nets. Savings from many years. Diversified income streams. The ability to continue to have income while being locked down because they had jobs which could be done from home.

Consider how the daily wage labourer has done, or the bus driver of a school bus, or even the Uber/Ola car owner. The restaurant owner, the person running clothes or toy shops, or even those running salons. Business is down, and down big. But their spend is largely on food and essentials, not on the higher end discretionary items.

So the dishwashers have sold, as have washing machines, and vacuum cleaners. Houses get painted now that people need to actually live in them for a longer time. Online education courses have done well, with teachers now having the ability to target students all over India; and this applies to physical trainers, vocational skills and even stock market education.

The biggest change has been the commoditization of the delivery service. Earlier you would say that Flipkart or Amazon were great for one-day delivery and so on. Now we have multiple startups, even some with one hour delivery, or even faster, if you count the Zomatos or Swiggys. The delivery part of the service is commoditized; you can hire a service, all of whom will give you real time tracking through an app. The businesses that should come from this core-infrastructure will be absolutely massive, but only in the years to come.

Additionally, the mass acceptance of UPI/IMPS and other digital mechanisms will stay after this crisis as well. That simple concept means the velocity of money can be much much higher than a cash-based economy, and will mean rapid expansion of opportunities at a later date – if you can pay me in advance, easily and immediately, I’m more willing to service you remotely. And then, merchant charges for UPI are next to nothing, so I’m quite happy to accept digital payments. This is being forced upon merchants today, but the ease of the concept will ensure that people continue with it even after Covid runs its course.

And then, there are other things.

The real revenge: Spends and Living

It’s really horrific that so many people have died. And many were young, fit and otherwise in great shape. And they couldn’t have known they were going to be hit this badly – in most cases, it’s inexplicable why one person had it so bad, while another family member was fine.

As reality hits us, we realize that life is short. Shorter than we think. We could do everything right – 100 pushups a day, a half marathon a week, no smoking, alcohol or even non-vegetarian food, and boom: a virus takes away all those brownie points you thought you earned from life. To the relatively rich person among us, the realization will dawn that doing whatever you’ve wanted to do, like travel, buy a great car or just get together with friends more often – is pretty much top priority. And there’s all this money stored up that’s currently in the stock market because we had nowhere else to put it.

When the virus impact recedes – as it already is in Mumbai and Delhi and slowly, Bangalore as well – we will see the emergence of bigger discretionary spending. And unlike last year, when the fear of dying was not as prevalent, this time is likely quite different among the richer parts of society. Does it mean they’ll buy fancier houses? Maybe, but remember that home loans lock in people for very long, and that’s not attractive either. But ephemeral spends like weddings, parties, tourism, vehicles and clothes – they should all increase substantially.

The next decade will, I think, belong to the YOLO (You Only Live Once) generation.

For us in the markets, this means one thing: the money that’s come in so easily, will stop. Or even go out as people finance their desires. In the past, such liquidity changes have resulted in sharp corrections. Let’s see if this time, too, we’ll still have that kind of a change.

The opportunity in local language and the small town India

Small town India is huge. In India, about 25 districts account for half the wealth in the country, if you go by bank balances. That’s about 78 lakh crores in the top 25, which includes Mumbai, Delhi, Bangalore and such.

The next 25 districts have a reasonably large 13 lakh crores. And these districts aren’t the most obvious. They include Kancheepuram in TN, Thrissur in Kerala, Indore in MP, Guwahati in Assam, Visakhapatnam and Vijayawada in AP, Agra and Varanasi in UP, Jammu and Amritsar in the North. These districts aren’t small in size or financial stature, but have a much higher dependence on the local language of that area.

Plus, more and more content is now video, even for commerce, apart from news and entertainment. Tapping these areas for products, information and services will require at least some ability to do cross language work.

The idea isn’t to go totally native. No one wants “shudh” Hindi, or Tamil, or Kannada. You want conversational formats – a popular form is “Hinglish” where you intersperse conversational language with english words like mobile phone, bandwidth, camera, discount etc. and people tend to understand it.

Which companies will figure in this mix? We don’t know right now. But the space will open. This may not be huge for the likes of Google yet, but it’s going to take something more nuanced, more local.

Move to smaller towns: India’s working class is largely concentrated in the big towns, but with the Covid things have started to change. People are able to work remotely and while it will not continue as it is, we expect that:

If this happens, the small-town India will get more direct jobs. Further small-towns will desire the same facilities as big towns such as Swiggy/Zomato, better restaurants, better facilities, coffee shops etc. This is going to cause a change in a few things:

Having said all of this, in the longest letter of the year, let me leave you with the lyrics of a song that wasn’t meant for philosophy, wasn’t in any way predictive of the time we have today, and is altogether out of place in a financial market letter. But here goes:

(learn this: live every moment

Think of this: you only have a few of them,

Remember, you only die once,

So before you die, learn to live)