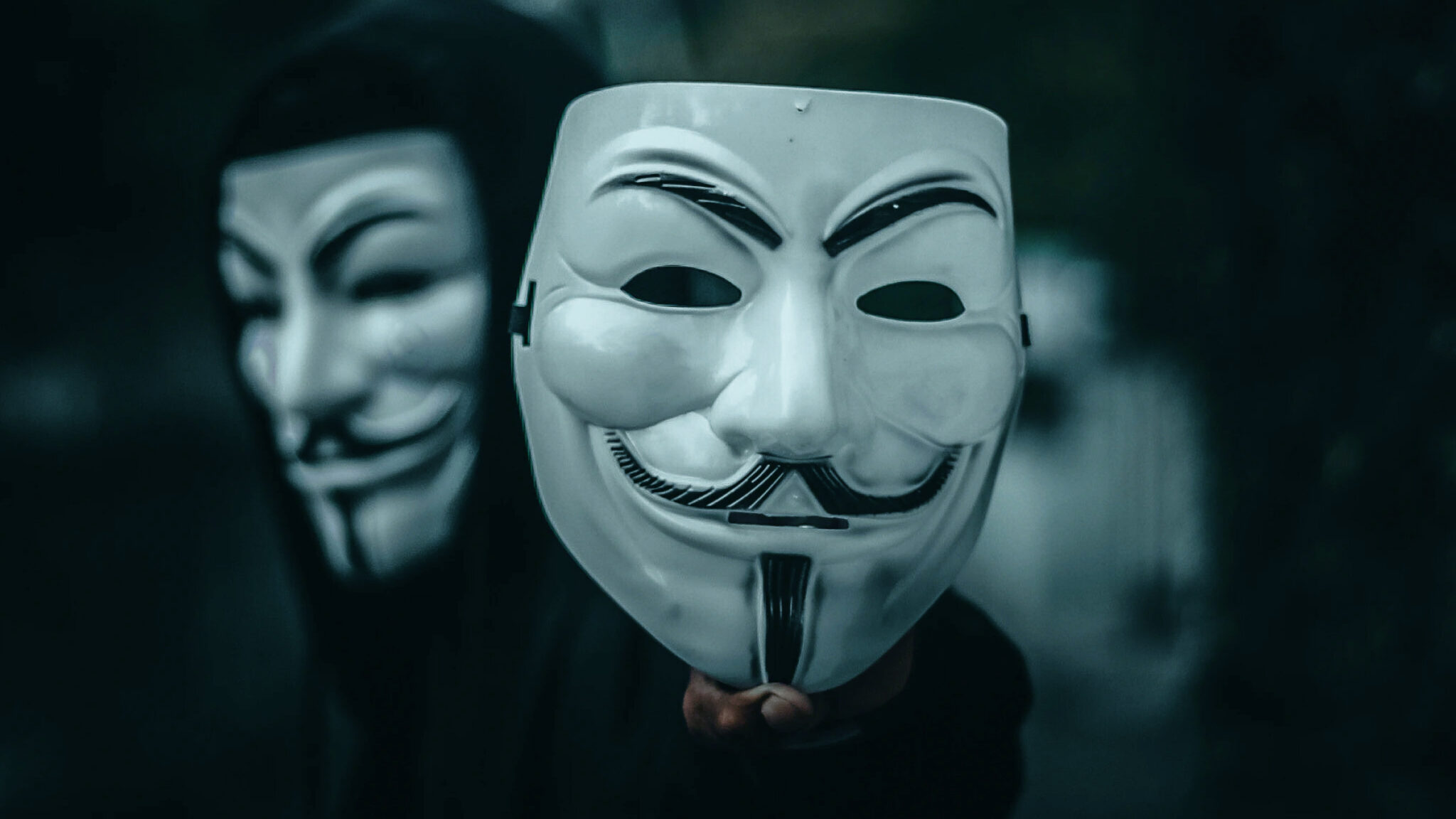 JSW Ispat was formerly Monnet Ispat, which went through a bankruptcy resolution. That brought its debt down and the shares continued to be listed, after a massive dilution. Currently, one of the promoters, named Aion, is selling 21% of the company, in an offer for sale (OFS) that had a floor at Rs. 27, which is less than half the market price. (Rs. 54)

By the first day of the sale, the price bid that cleared the OFS is Rs. 35.05, which is 35% below the market price of Rs. 54. Rs. 35.05 is the price at which retail investors can bid on 16th June. This is a tiny issue – only about 1 crore shares on offer for retail, but consider this a case study.

First, What’s With This Company?

Since then the company has done very well on the charts, up more than 4x in about a year. 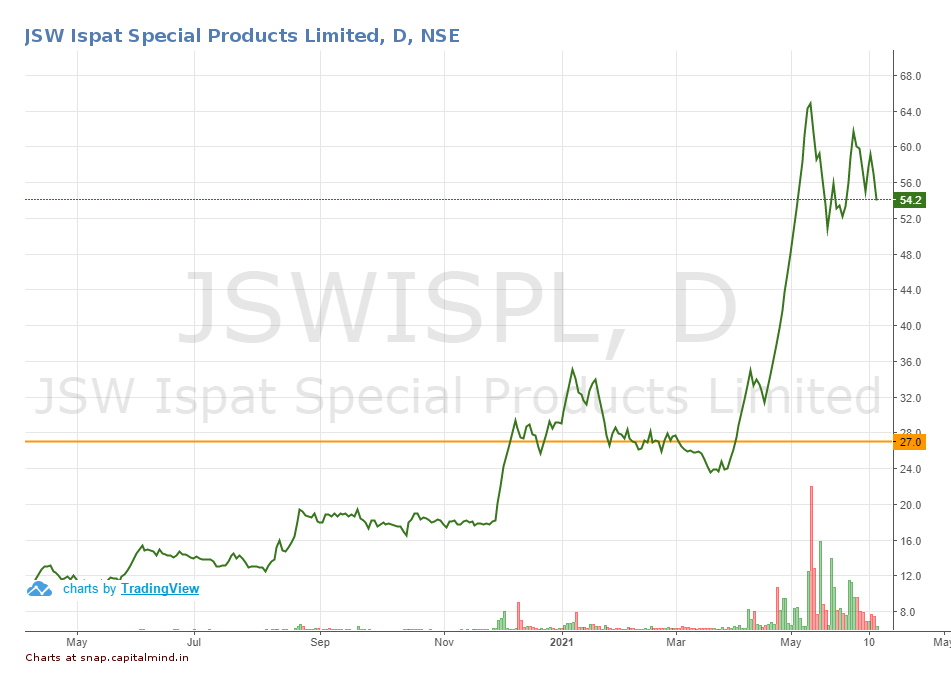 The orange line is of significance – we will come back on that.

What’s happened since the resolution?

The old promoters were kicked out. Everyone else who had shares were given 1/3rd their shares back as part of a capital reduction exercise, and the new promoters (JSW + Aion) were given new shares to own 75% of the company. Banks were also given shares – ICICI, SBI and PNB were the most prominent among them. (This is a good thing – banks must take shares in such companies – all of them will see some recovery from the shares now)

The turn of the steel cycle also means the company some small things going for it – it has expanded capacity, moved upscale from pellets to bars and billets (end products) and seen better returns. With steel prices going up, capacity getting utilized and debt being stable, the company made a profit of Rs. 93 cr. in the last quarter of FY2021. (The full year only saw a profit because of a loan write off in a subsidiary, so it’s not out of the woods)

The profit has seen the stock price jump. The quarter’s EBIDTA of Rs. 200 cr. and market cap (displayed) of only 2,500 cr. makes the company look cheap – if you extrapolate the numbers. Oh, the company makes 93 cr. profit after tax in a quarter. So that’s nearly Rs. 400 cr. profit in a year! For which we’re paying only Rs. 2,500 cr, which is 6 times earnings. Isn’t that cheap?

The worst thing you can ever do is extrapolate a single quarter’s numbers, especially near the top of a commodity cycle.

But at JSW Ispat, there’s another sinister thing lurking.

When the company went through bankruptcy, the rules were that a new promoter couldn’t take more than 75% equity ownership. So what the new promoters (JSW+Aion) did was to issue some equity shares and for the rest, issue themselves preference shares, convertible to equity.

Now the shareholding pattern is:

Now people look at the market cap using only the equity shares (46 cr. shares). What happens if the entire preference share capital is converted to equity? Remember, no more money will be paid to convert the preference shares to equity.

(We’ll look at another method of valuation later)

The point is this: there is massive dilution lurking in the preference shares that aren’t yet converted. People have ignored it thus far. Not any more.

Why are promoters selling?

Aion is a fund and is expected to sell and get money out. It’s selling what looks like it’s entire ownership, of nearly 10 cr. shares (21% of current equity capital)

But Aion owns another nearly 10 cr. shares in preference shares; which they can convert at any time they want.

Why don’t they convert it right now? Because then they would cross the promoter threshold of 75% allowed by SEBI. So they’ll first sell their shares to the public, and convert the rest at leisure.

Why the low price?

How come we get a price of Rs. 35.05? Because now people know what to bid. Think of the valuation post-dilution.

Most such companies are valued at EV/EBIDTA; EV is a combination of equity plus debt. JSW Steel – the big boy in the business – is at an EV/EBIDTA of 10.

That’s close to where the bids are now; so the market seems to know about the dilution (or has just remembered)

And that’s considering this bull run in steel prices continues, that demand remains high at this price etc.

So, Should You Bid?

The stock price in the longer term will correct to more reasonable levels, but these as crazy-as-hell markets. People are bidding heavily even for dying companies even when we know they’re going to die soon. (Videocon, DHFL, both in upper circuit when it was known they would go to zero)

If you want to risk your money on this kind of madness continuing, then those choices are entirely yours.

But if you’re reading this far, I would say this is a waste of money to bid in the OFS, or to buy this share at all. The last time, I mentioned that the max you’d pay for this share was Rs. 19 (and the share capital has been cut by 1/3rd, so that translates to Rs. 57 of today’s price) I think the bull market took the share there, but with these sales, and the float increasing, I don’t think it’s worth the effort.

Remember this: There’s a 100% dilution coming – the promoters will, at some point, convert their preference shares to equity. And the valuations are not cheap. What’s hidden is that the preference shareholding convert this from a visibly cheap company to an actually expensive one, even at 40% below the last traded price.

Correction: The price was wrongly mentioned as 33.91. It has now been corrected.