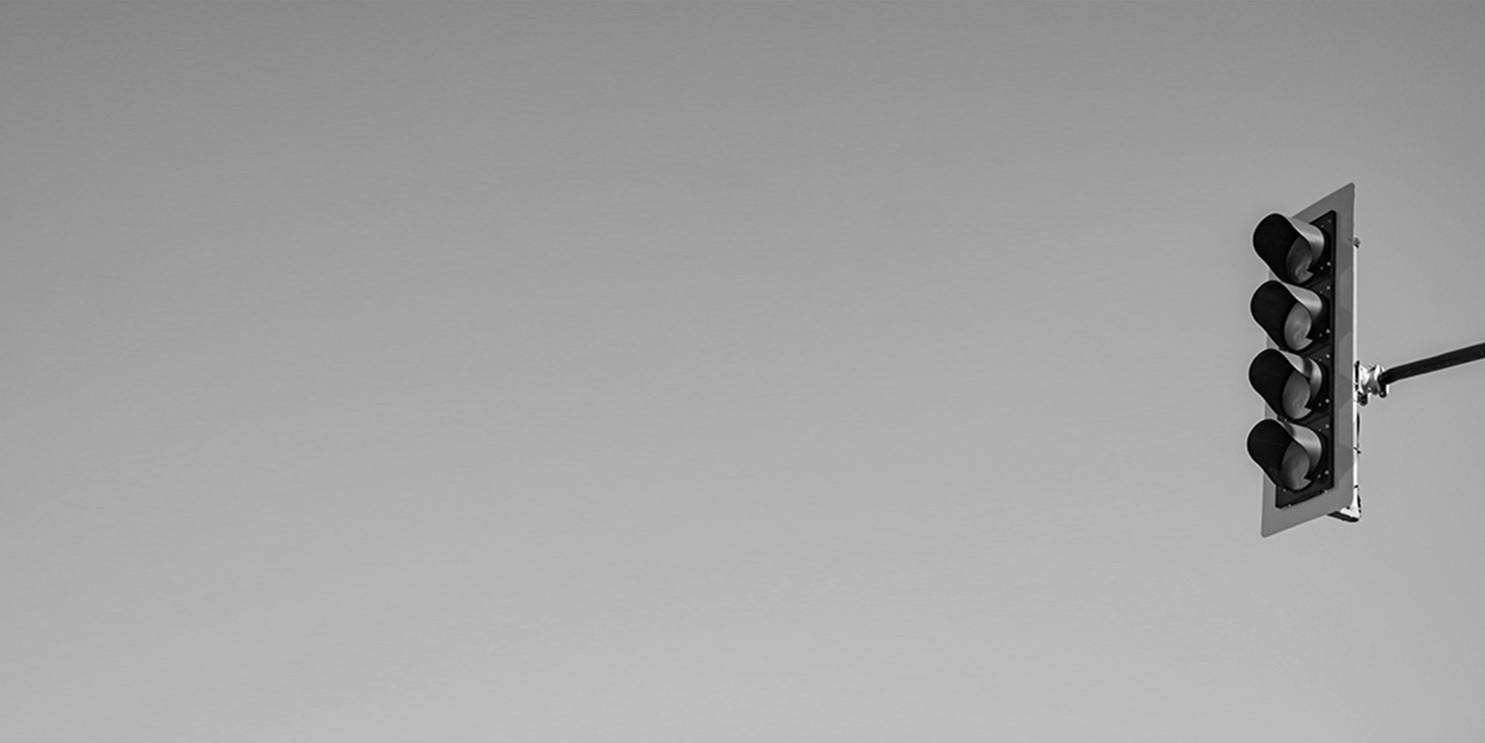 Reliance Jio Infocomm Ltd., a few days back, did what most telecom companies routinely do – announce new tariff plans. But there was something unusual about these plans introduced by the country’s most valued telecom company.

Then what was so different that Jio did?

First, four out of the five new plans introduced were largely at an unchanged pack price. This means that there are already plans available at those price ranges.

Second, the new plans did not have any cap on data usage. Reliance Jio was the first to introduce the concept of daily data usage limits in the Indian market.

Third, the plans introduced had an unusual validity cycle. It was a 30-day validity cycle, unlike all other major prepaid plans. Reliance Jio was the first to start charging prepaid customers on a 28-day cycle.

In a statement to media companies, Jio said, “They (the new plans) will help high data users enjoy seamless data usage without having to worry about exhausting daily limits while the 30-day validity cycle offers ease of remembering the recharge date.”

As there is no data cap, the company is allowing only half the data it provides on the existing plans. In other words, it is charging double the rates per gigabyte of data on these new plans. Since Jio started charging customers, i.e., three years back, it has pioneered bundled plans offering unlimited voice and hefty daily data limits ranging between 1-3 GB/day. It has always been offering data at the lowest rate in the industry.

As these new plans are offering lower data, will it impact its subscribers? 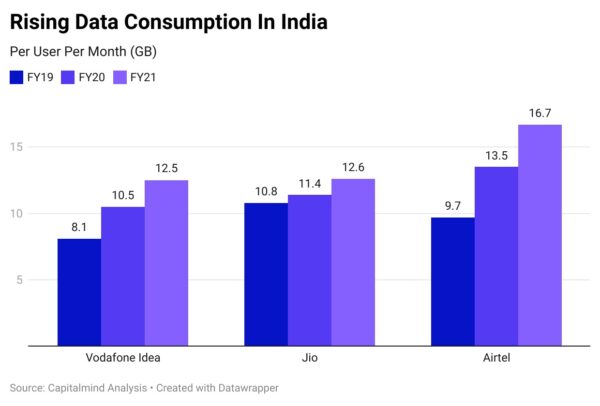 As these plans are charging double the data rates, does this mean the company’s average revenue per user will increase?

No, it won’t. In fact, if customers opt for these new plans, it will lead to lower ARPU as the company is offering similar pack prices for more days.

ARPU means the net revenue received by the telecom operator per user per month. Prepaid recharge amounts are inclusive of 18% GST. Thus, the balance amount after deducting GST is considered as an ARPU for a telecom operator.

What To Make Of These New Plans?

As data rollover is not provided in prepaid plans, generally, high data usage subscribers tend to hit their daily data limits more often on weekends. We believe Jio’s new plans are aimed to attract such users. These new plans could also be bundled with the upcoming smartphone launch of Jio in partnership with Google. If so, these plans could also attract low data users and 2G users.

These plans also reflect Jio’s preference for raising ARPUs via up-trading instead of tariff hikes (similar to Bharti Airtel) and that its network can address demand surge over weekends.

If the old plans are withdrawn – which is a complete possibility – then there could be some ARPU improvement opportunity from high usage subscribers. As they will need to do a data top-up, on these new plans, post consuming the entire data allowance. However, as long as old plans exist, we don’t see any immediate benefit on ARPU.

The introduction of these new plans is also a step in the right direction, as it allows the company to monetise consumer surplus in the future when data allowance may be cut further and/or consumers’ usage may rise.

The price pack for the 56-day validity cycle is the same across all private operators. The only expensive plan (compared to others) that Jio has is the ₹ 999 plan which offers 3 GB/day for 84 days. On the postpaid front, for all plans across players, the validity is 30 days and data rollover is allowed. On the data allowance front and add-ons, Jio has been more generous across all plans. The ₹ 699 and ₹ 1,099 plan offered by Vodafone Idea seems to be better in that bracket as it offers unlimited and access to almost all OTTs. In the first two price brackets, Jio’s offering is much better as the cost per GB is less and OTT offerings are more. 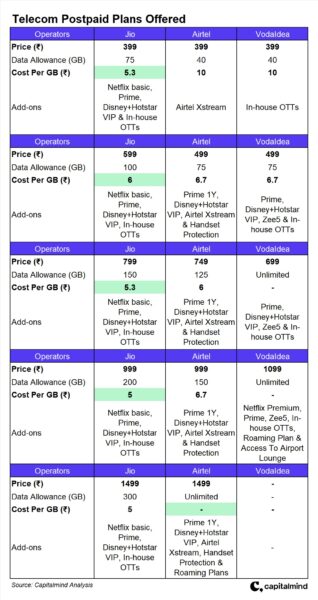 Since December 2019, the telecom sector is yet to report a tariff hike. In our last post on tariffs (Telecom Tariff Hike: Imminent, But When?), we pointed out the factors that could lead to a tariff hike. Though these reasons persist, a tariff hike is yet to take place.

So, what could have led to the delay?

The second wave of Covid-19 and focus on market share gains.

Despite a tariff hike in December 2019, Vodafone Idea has witnessed a drop in its revenue. This indicates that that market share shifts are far from over for Vodafone Idea. Given this, another operator focus is likely to be on gaining market share, suggesting delays in tariff hikes.

Bharti Airtel is already earning sector-leading ARPU and has time again said that it will not initiate a tariff hike. Reliance Jio in February 2021 launched cheaper JioPhone plans to target 2G customers.

Both these factors do indicate that even this time, Vodafone Idea has to be the one to initiate a tariff hike. However, the company is still waiting for the “right time”.

“we will not wait for anybody else to take the first step, but we may raise prices at the right time. I can’t tell you that exactly what time it would be, because it’s clearly a competitive issue as well. How much, what time and so on are things that we will decide at the right time and what is the right opportunity to do it, but we are not waiting for anybody in particular to raise tariffs. When we believe we are in the best position as a company to raise prices and increase tariffs to how much we need, we will take those steps.”

What Is Bharti Airtel Upto?