Sometimes it’s not obvious how much the lockdowns have hit the economy, so we have to look at some data that’s released on a more regular basis. RBI releases data of how much people are spending on credit and debit cards, and UPI/IMPS on a daily basis, since November 2020.

And what it tells us isn’t exactly kind.

Both credit and debit card daily volumes – smoothed with a 15 day moving average, have been falling sharply since April 1. That’s about when the lockdowns started with the second wave of Covid. 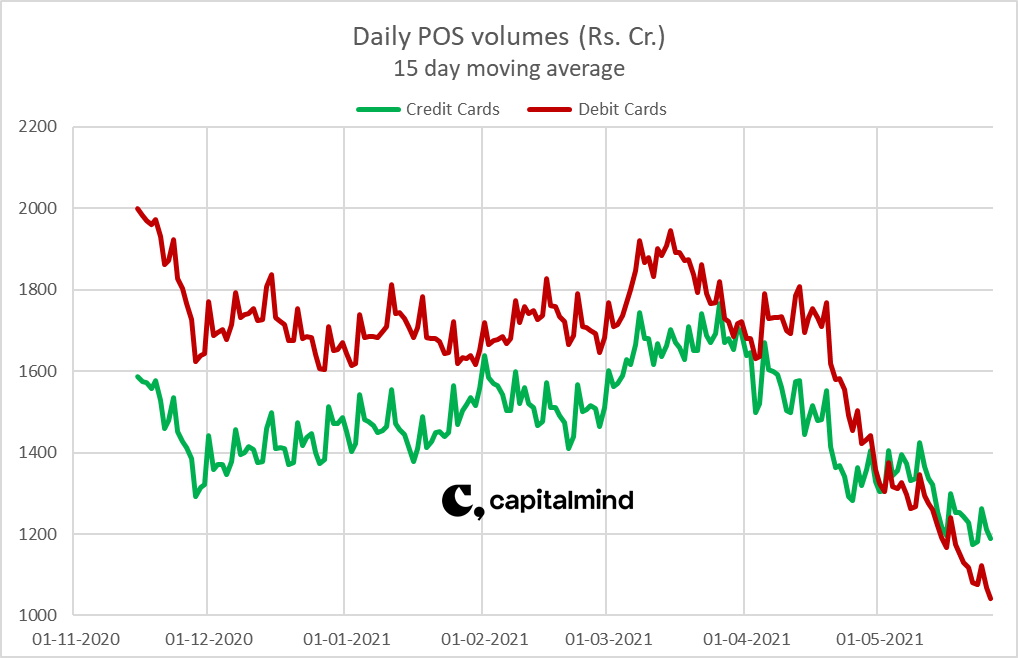 This has some meaning but not in isolation. Have people stop spending altogether?

UPI has taken India by storm. It’s so huge that I couldn’t even show credit card or debit card volumes in the same chart as UPI! On average UPI transactions are over 14,000 crores a day now. This is still lower than earlier, but remember a new all time high in daily UPI volumes was made in May 2021, which means UPI based spends are still on. The chart shows early signs of slowing down though.

What does this mean?

India’s economic engine is driven by consumer spending, and a good portion of card spends have been physical (i.e. at a shop). Without the ability to go visit a shop, or the inclination to do so, the big spenders in India have probably shut down those operations.

UPI meanwhile is not just a payment system, it’s also a way to freely transact between bank accounts. (I probably transact for 10x my liquid cash just moving it around using UPI now) This is much higher than card POS transactions, but has not fallen quite that drastically, so some level of retail transaction volume remains intact.

For banks and card companies: Is the fall in payment volumes a sign of worry? The transactors are important to any card ecosystem, who generate roughly half their revenues from credit card transactions alone (rather than interest). Meaning: People who transact on a card generate that 1% to 2% for the card issuer, which is a key source of revenue. More importantly, the SME retail shop is also often a borrower, and a falling transaction volume could result in more NPAs in this ecosystem, as retail revenues appear like they are falling.

For the economy: Card spends are an indication of the relatively richer spender. If spends are falling this badly, is the consumer spending engine going to hurt for a longer time? Without income, some shops will vanish. And even if lockdowns open, people will not voluntarily rush back like they did the last time – because we all know people who were very badly impacted by the disease. Plus, they’re saying the next wave will target children, which means fear remains on the street. Card spends will then likely remain much lower, and for longer.

Well, of course the lockdowns will end, and things will come back to normal eventually. The lack of spending in the interim hits the poor the hardest, because they don’t have the safety nets available. The loops for positive feedback in an upmove – where you will make more money, increase staff salaries, hire more etc. have a very different trajectory on the downside. You can’t cut salaries easily, so you have to fire people. You can’t afford rent, so you’ll move out to a cheaper place. You can’t pay back a loan, so you will need to shut down the business. The continuity depends mostly on the ability of employees, landlords or financiers to take a hit on their current incomes. And that isn’t always forthcoming. So on the downside the economic impact is sudden and dramatic, rather than smooth.

This is pessimistic, indeed. Because stock prices won’t care. Because the money that isn’t being spent on credit cards is probably going to the one place that is oblivious of the economic damage: the stock market.