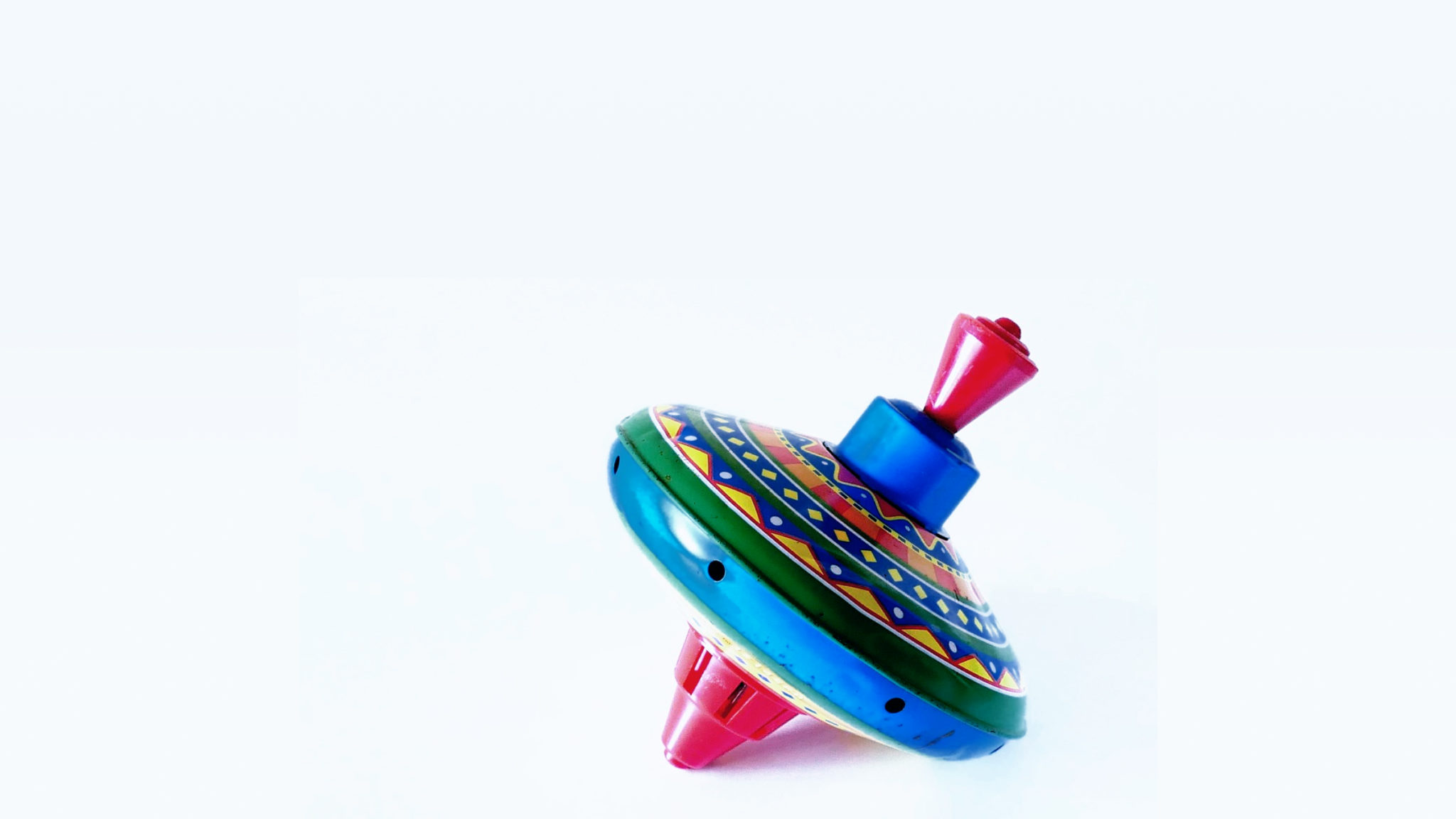 RBI continues to maintain rates where they are, because of a complicated argument involving inflation and rates and yields and what not. But we think there’s a simpler reason: There’s no point cutting rates and there’s no reason to raise rates.

The real big deal is this: To calm down the yield curve, RBI will buy government securities from the secondary market. This quarter alone, they will buy Rs. 100,000 cr. worth of bonds.

This is a long post but in effect, we will not change the fixed income portfolio. We’ll take the next call in a quarter or longer, if events change our thinking.

In this equation, where does the RBI come in?

The answer is this: RBI’s concept of interest rates is to reduce rates when inflation is low, and increase rates when inflation is high. Why? Because when inflation is low, the economy can slow down dramatically if rates are too high. If rates are high, then people will find interest hard to pay, and companies will focus on reducing their borrowing rather than growth. This reduces the overall growth of the economy and hurts progress. Higher interest rates also makes a country less competitive – a China with lower rates can build the same thing much cheaper because of lower borrowing and interest costs.

So, the RBI wants longer term interest rates to not run up like crazy.

If the government bonds are paying higher interest rates (because people are afraid of the government issuing more bonds to pay for a wider deficit) then what happens to corporate and retail borrowing?

The government is the safest place to invest.

So everyone pays an even higher rate than the government.

Can the RBI stop this? How do other countries do it?

The world over, this has been sorted by a different approach. The central banks directly buy bonds. They can print money to buy their country’s bonds.

The ECB has accelerated buying bonds. The US Fed buys $80 billion of US government bonds EVERY MONTH. (India’s entire year’s net bond issuance is about $120 billion, just to give you an idea)

The Japanese central bank will buy a chunk of cheese if it calls itself a government bond.

In Britain they will argue forever about Brexit, Corona and if Meghan Markle is fit to be royalty. But their central bank will always buy government bonds. They’ve bought 250 Billion UK Pounds worth  of government bonds between April 2020 and November 2020. That is roughly 25 lakh crores – nearly 3x India’s net bond issuance this coming year.

The standard idiot answer to this question is: But they are developed countries! We will now go drink some water and calm down because I couldn’t care less what these other countries are. We can do what they do, and we have been doing it, and no one’s noticed simply because we don’t give it names like “QE” which, if you’re British, doesn’t stand for Queen of England because no one else cares about her.

So What Will RBI do?

Under the acronym, G-SAP 1.0, which is competing for the worlds worst acronym ever, the RBI will:

They have bought it through “Open Market Operations” (OMO) Auctions, which is essentially where they invite offers for government bonds and buy. In an “operation twist” they will also simultaneously sell other shorter term bonds (like with three months to maturity)

RBI is different from the government. It can own government bonds and it can own foreign currency bonds of other countries as well. Given that it can print rupees at will it can effectively print and buy government bonds with the money.

They do this regularly, so this isn’t super surprising either. We just have a ludicrous acronym.

But the RBI doesn’t buy from the government. It buys from the market, as is the standard practice in the west. Apart from auctions, the RBI also buys bonds quietly in the secondary market. The idea is that a market player (banks, mutual funds etc) set the prices in the market, and the RBI only buys from them. It will hold the first auction of 25,000 cr. on 15 April.

Is this not financing the deficit?

Every country is doing the same thing, and it’s not illogical for the RBI to do this for India too. If RBI owns Rs. 100 in Indian Government Bonds, it owns Rs. 300 in foreign currency based other country bonds (mostly USA). In effect, we are financing USAs deficit too.

Finally, you must remember that the power of the biggest startups in the world which have really changed things, have come from relatively cheap money, and these startups are changing the world. It’s good to keep rates low – these startups do things the massively reduce inflation too.

This purchasing will end up helping the government finance the deficit. But that’s all right, because I’d rather the RBI do that after printing money, rather than printing rupees to buy dollars and finance the US deficit (which it anyhow does 3x more than it does in India).

And the Massive Fall in the Rupee

The rupee fell dramatically against the US Dollar. The exchange rate traded at 74.5 or so, quickly after the announcement. 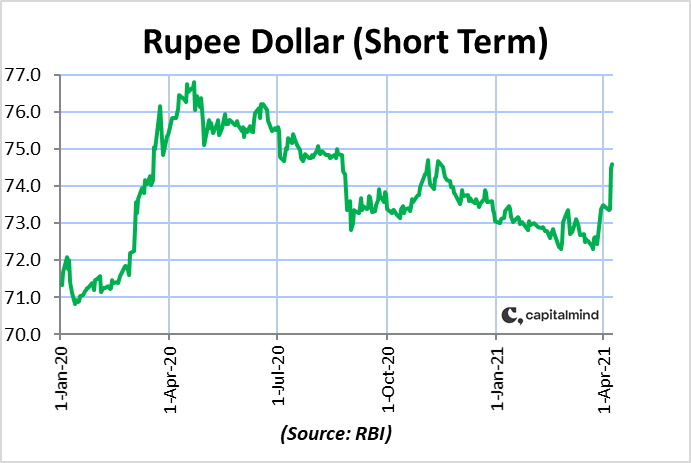 This makes little sense, of course. Our rupee is hardly bothered with whether RBI is buying bonds or not. Case in point: last year we bought Rs. 300,000 cr. + and the rupee actually appreciated. This is likely to be something else.

Unless this rupee printing by the RBI to buy bonds creates inflation. In which case, foreign investors will exit our stocks as well, but that hasn’t happened.

Will this create inflation?

The short answer is: No. The RBI has printed rupees up its wazoo last year, and inflation has mostly been under control.

Western economies have printed money beyond imagination, and even they haven’t seen inflation in the last decade.

So here’s a couple of interesting charts. Firstly, from a set of “professional forecasters” whose job is to forecast things, apparently. 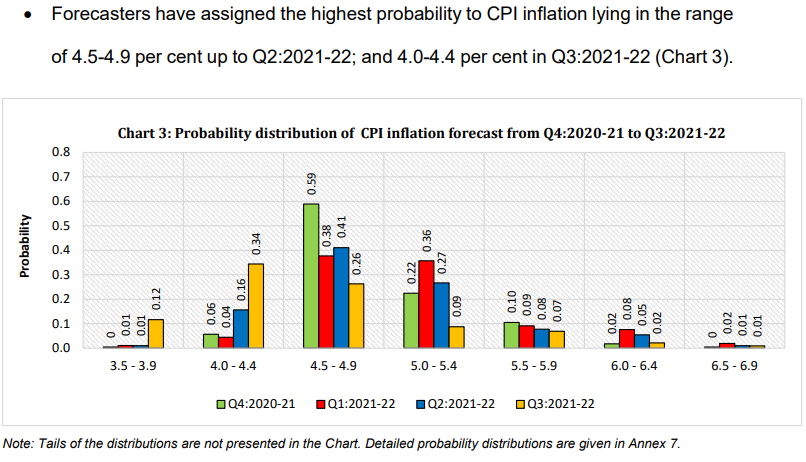 And then, what households say about their expectations of inflation.

Household expectation numbers are usually much higher than actual inflation, but the trend is important.

Even RBI notes that inflation is likely to be lower by December. At 4-6% we don’t really have to raise interest rates.

Lower inflation provides a path for one thing – lower interest rates for a long time. Foreign countries are saying it even through they are seeing high inflation.

What’s the point? That Government bonds still make sense to be invested in

The threat to our fixed income portfolio has been higher interest rate expectations due to inflation. Or, due to rising interest rates in the west. We don’t think either of the above will happen.

In effect, our positioning, which is to have long term government bonds and shorter term PSU/Banking bonds (through the appropriate mutual funds) is a good thing to continue.

Note: It’s not a great idea to keep changing fixed income portfolios unless there’s a solid reason to. Because changing it has tax implications, which is unnecessary.

The Next Year for Government Finances

Barring a massive wave of lockdowns, the hit to government finances doesn’t look as bad, as February 2021 data shows the deficit is much lower than the full year estimates, with only one month to go. Tax collections were decent (largely from a massive 100,000 cr. extra from the petrol/diesel taxes) and expenditure wasn’t quite as much.

The next year is likely to bring some cheer as it appears that GST is finally providing the government with a decent revenue stream as more loopholes have been addressed. Sales of PSUs like BPCL will help too. Overall, the outlook for tax collections and overall revenue for the government in the coming years is that they will go up simply because of larger compliance, getting rid of assets they shouldn’t have owned, more formalization of the economy and lower corporate tax rates.

The Fixed Income Portfolio will not change

You can find the portfolio on the Capitalmind Portfolio Dashboard. We retain it as is.

Bond yields have fallen now – from 6.13% before the RBI policy to about 6.03% in two days on the benchmark 10 year, but the rest of the bond curve is stubbornly where it was. However, as US bond yields too retreat from 1.75% to 1.62%, we believe it will take a month or so for the RBI actions to help reduce yields overall.

Performance of the fixed income portfolio:

For all the time we spent to not do anything most of the time, the performance is reasonable. We know the year so far has been incredibly bad, but we believe the rest of it will cover the lost ground.

However, please note that if things change, we’ll work through it in the Slack channels.

That’s not all. Capitalmind Premium subscribers get access to:

From the Capitalmind Slack Forum 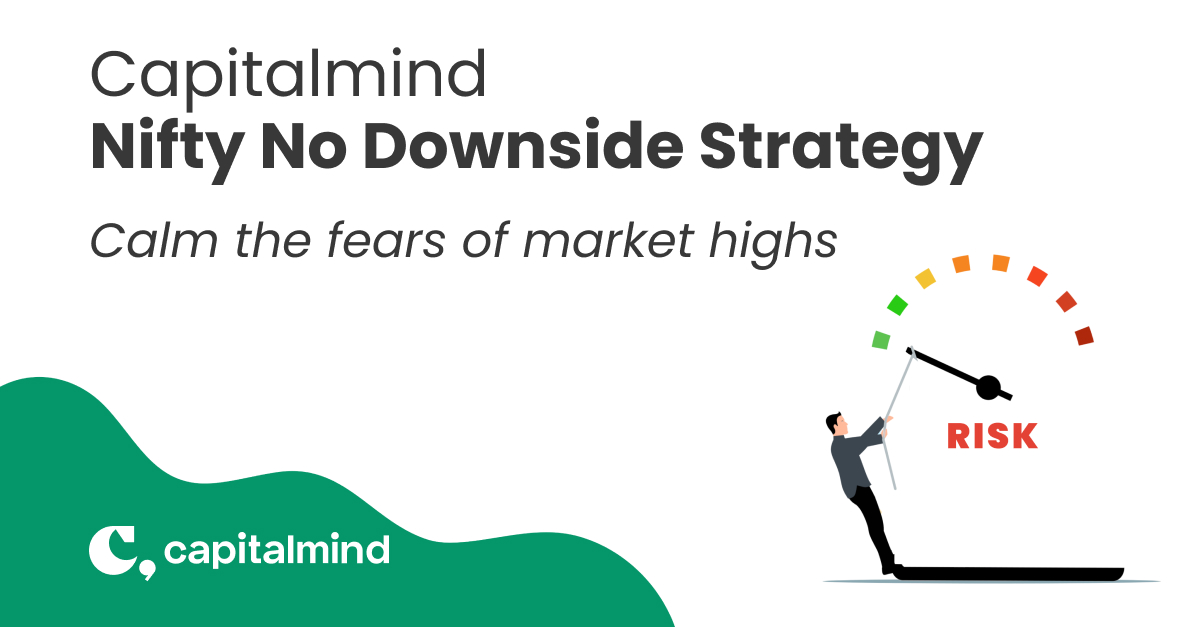