​​​​​​​In our “House view” series, we publish summaries of discussions on Capitalmind slack forum. Think of them as short crowd-sourced primers about the business, before diving deep.

We recently published a take on IRCTC, one on Bajaj Finance and its prospects. This one is about Kovai Medical Center and Hospital (KMCH), one of the efficiently run multi speciality hospital in the country.

The healthcare industry in India is classified into

India spends 1.6% of its GDP on healthcare, this is way lower than developed nations who allocate 9-15% on healthcare. Accounting for private investments spending in India is still lower at 4.5% of GDP. The national health policy,2017 recommends government expenditure to be increased to 2.5% of GDP by 2025.

KMCH was started in 1990 in Coimbatore with a 200 bed facility by Dr. Nalla Palansiswami. It currently has 1,390 bed capacity on a 20 acre land in Coimbatore. Apart from its main centre on this site it has 3 more facilities in the city and one in Erode.

KMCH has two segments or lines of businesses

KMCH Institute of health sciences and research (KMCH medical college) started its operations in FY20. This facility has been set up at the cost of Rs 600 Cr. Apart from the college, KMCH commissioned 750 bed facility in August 2020 and has enrolled the first batch of 150 medical students during the year.

KMCH has been at the forefront of technological development – be it getting the latest equipment or introducing new methods of treatment. For instance, it introduced mobile stroke unit last year catering to any kind of trauma, cardiac and medical emergencies.

Every business has certain characteristics which one needs to be cognisant of before considering any investments. In the case of a hospital chain the key features are 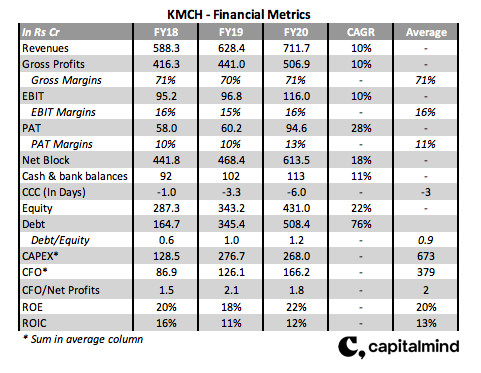 Key observations from the above table

Certain specific metrics with regards to patients, hospital beds and utilization levels are shown below 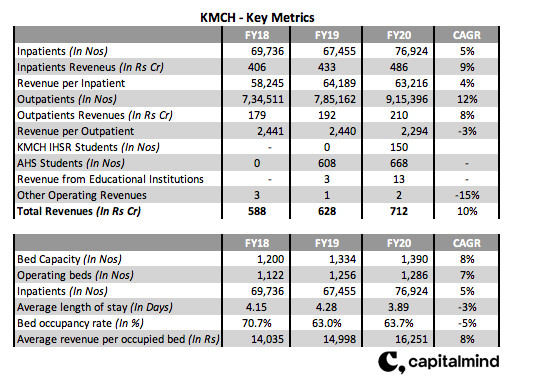 How do the other listed hospital chains fare on important metrics?

Below is the data for Apollo, Naryana Hrudayalaya, Fortis and Indraprastha medical 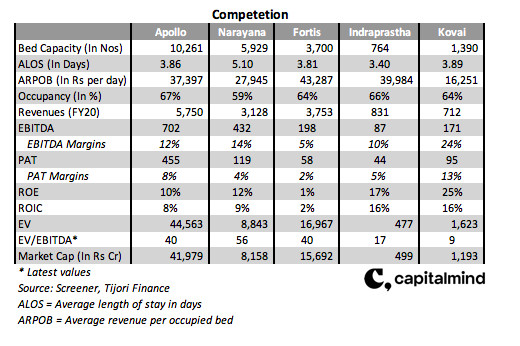 The key drivers of the hospital segment are

Risks specific to KMCH are

KMCH is a very well run speciality hospital. In the FY11-20 period revenues, EBITDA and PAT have grown by 17%,19% and 26%. Return rations – ROE’s and ROIC’s are better than other listed players.

However the below points need to be considered while evaluating KMCH

We had a wide range of discussions on KMCH on our slack forum. Below are some insights into KMCH and its business from our slack discussions.

One of our members SP has held the stock for a long period of time and has made returns that every investor aspires for. His view on the business

It’s made tons of money in the past. However, the last 4 years or so it has languished. Used to be a regular to their AGM. Father son duo had a spat in management roles and son went back to US. Father is trying to optimise the real estate and brand by branching out to teaching medicine/ancillary services and has carried out CAPEX. For me it remains a single centre business and may be a cash cow but equity may not move unless they expand. They did some small expansion around the main hospital as a satellite model but that didn’t make any impact on the P&L.

Member R on how KMCH compares with other hospitals

How does it compare to a pure play on Oncology such as HCG?

CM View: KMCH does not disclose revenues by each department, so difficult to say how it compares with HCG. During my research I did come across that KMCH stands out for Cardiac and Oncology in Coimbatore.

It was in 2014, back then data collection was poor and you had to look at the unusual suspects on Valuepickr or buy/sell screens on BSE on a daily basis. Factors that lead to adding the company

We looked at these factors and visited the hospital and did our own scuttle butt and jumped in at 140 levels then followed up on all data for years including attending AGM’s. AGM’s were fun, these were like wedding events and lunch was served on plantain leaf. Promoters were approachable and we liked their motive and simplicity.

So after it hit 1,400 checked out because of incompatibility between the father-son duo. The son left for the US and Palaniswamy spent money on expansion of medical college.

Personally I thought the story is now done and no point in staying put on a single centre business so checked out and I thought it will be like Indraprastha hospital in Delhi or Fortis Malar in Chennai Which are great but are single centre hospitals.​​​​​​​

Single centre can hamper the growth of KMCH or KMCH may not realize its full potential, however member N has a different point of view

My understanding is that the satellite centres are feeders to the main hospital along with their own revenue. Its too early to judge on the future growth but their selection of localities for the hospitals and satellite centres seem to be fine so far. In Chennai too they were looking at Solinganalloor (South Chennai sub-urban) that was in the centre of the IT corridor and not exactly in the heart of the city.

They seemed to have prioritized the college when private players were allowed to do this. They have set up the college instead of setting up more hospitals in other tier-2,3 cities. The college may not be a primary driver, but one way to see this is probably that it is a better way to utilize the land bank (same hospital site) that was lying idle and expanding the existing hospital in the very location might not be beneficial to the same extent.

Also once this CAPEX cycle is over, I hope that it should not be hard to replicate the one core hospital and surrounding satellite centres for expansion within Tamil Nadu/South India itself. They seem to have got the capital allocation right so far.

Disc: Investor from 2011, views could be biased or just hope.

One way of investing is by using the product or experiencing the services of  the company. The inputs that one gets are qualitative in nature, however these weigh in equally along with quantitative factors while making investment decisions.

One of our members RS has a first hand experience of KMCH’s service offerings.

My experience may not add value to the valuation part of the story, but I feel I have to share something about this brand.

Around 3 years ago, I spent around 30 days at KMC (3 stints of 10 days each or so). My grandmother in Salem got very sick and was recommended here and I was there with her for most of her hospitalisation.

What struck me first was the immense warmth I was greeted with, starting from the guard to the reception area and amplified by the incredible nursing staff. Added bonus was amazingly caring doctors.I cannot stress enough about the nursing staff. I was there through and through with grandma, and EVERYDAY, the nursing staff was most loving, most polite, and almost seemed handpicked to do the job well.

I have NEVER ever seen such high quality staff (both in terms of empathy as well as intelligence ever). I’ve had my fair share of hospital stays with seniors in “top” hospitals. The work ethic here was incredible, and somehow, it seemed systemic . It was visible all across the hospital. Now whether is the Coimbatore hospitality or the training which Kutti(Nala) imparts.

The doctors were also stupendous. The experts who helped us out were by far the most down to earth folks we have met. Even the ICU staff who are mostly overworked were remarkably nice and grounded. Their jobs are ridiculously difficult, and what amazed me is how tuned they were to our psyche.The level of care we got there was unparalleled and the end cost was lower than the big hospitals

I also spent some time going through shared wards (when grandma was in ICU). The level of care the nurses offered was unbelievable. Nurses have a much tougher job than doctors. They have to constantly run through their 8-12 hours shifts, answering questions, doing stuff for patients which you and I might cringe doing. So much so that big hospitals have “different staff” for different duties. The nurses are well taken care of in their hostel, however they did seem overworked. I think Kutti works hard to get the best staff to his hospital, and it shows. Unfortunately, it’s a lot of pressure on these young kids (early 20’s), and that’s where I feel bad for them even though we got stellar service.

Small asides which I enjoyed

Even the patient food was excellent. Why is food important? Usually in tense hospital situations, I never ever eat, for days together. Somehow, this was the only place, where the food was comforting and the people more so.

Lastly, all this is pre Covid. I have no clue how things have changed post Covid. However if there is one belief I have, it’s that this place will do well in situations like this. They are very very hardworking and sincere and the culture exists across all levels

This article is for informational purposes and should not be considered a recommendation to buy or sell any stock. Stocks discussed might be part of Capitalmind Premium portfolios.

Join Capitalmind Premium to be part of the conversation. Get access to model portfolios, actionable strategies, and of course, premium research.