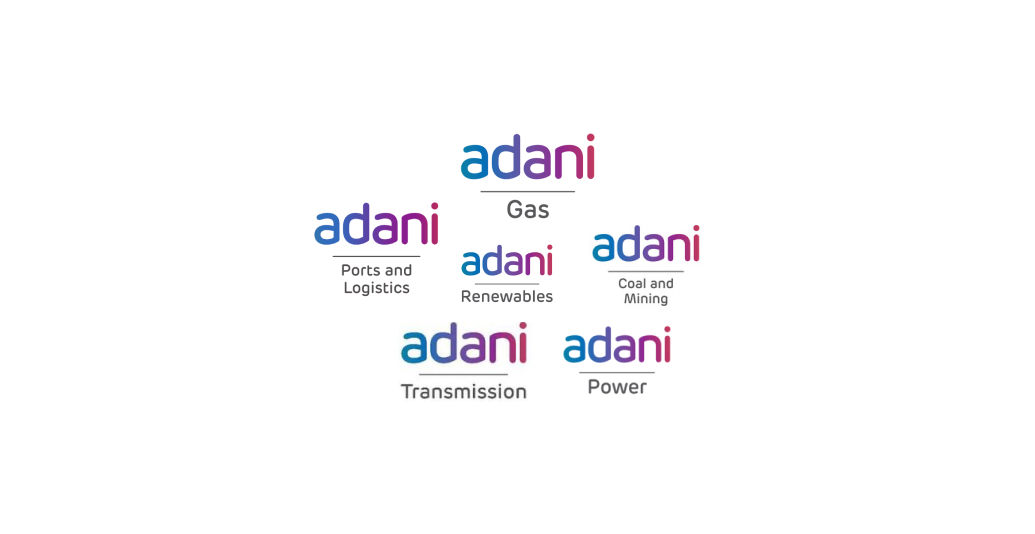 Part 4 of our series simplifying Adani Group Companies and their businesses. This one covers the business of Adani Enterprises Ltd.

Initially, all group companies were subsidiaries of Adani Enterprises, which is also a listed entity. It is engaged in mining services, solar manufacturing, agro, roads, and airport services business. The next generation of its strategic business investments is centered on the fields of solar PV manufacturing, airport management, technology parks, and water infrastructure.

In the airport business, the company is involved in acquiring, developing, and maintaining airport infrastructure assets. The airport arm – Adani Airports – has won the mandate to operate the airports at Ahmedabad, Lucknow, Mangaluru, Jaipur, Guwahati, and Thiruvananthapuram – for 50 years. It owns 74% stake in Mumbai International Airport and indirectly controls the upcoming Navi Mumbai Airport.

Also woven into Adani Enterprise’s operations are the conglomerate’s mining and coal management businesses. Adani Mining is in charge of the globally famous Carmichael coal mine project in Australia, which has elicited widespread controversy over its claimed economic benefits and environmental implications. The company has so far invested $1.3 billion in the project which is expected to commence operation by H1FY22.

Apart from this, the company has a joint venture – Adani Wilmar – which has ‘Fortune’ – India’s largest edible oil brand. It has several road projects and is in process of building a sewage treatment plant in Allahabad. It has entered the business of setting up data centres by entering a JV with EdgeConneX, a global data centres operator with 50 facilities in 30 markets around the world.

Coming back to the main businesses.

In integrated resources management business, Adani Enterprises imports coal through its established coal sourcing arrangements with coal suppliers of Indonesia, Australia, and South Africa and sells to a diversified domestic clientele including its group company – Adani Power (15% of total sales).

MDO (mine developer and operator) business involves the development and operation of mining assets. The company has been acting as a mine developer and operator on behalf of Rajasthan Rajya Vidyut Utpadan Nigam Ltd. for its coal requirements. It has further operationalised coal blocks at Gare Palma III and Talabira II & III. During FY20, Adani Enterprises forayed into washery services for mining companies and has received LOI for the Hinduja Washery project for 10 MMT and for iron ore mining for Kurmitar Iron Ore block for 6 MMT. Although MDO business does not contribute much to the topline, it has a healthy contribution to its profitability since it is a high-margin business.

Through Mundra Solar PV Ltd., the company had commissioned India’s largest integrated solar PV cell and module manufacturing facility at Mundra with an installed capacity of 1,200 MW. As the government pushes for more reforms and encourages greener energy, the segment is expected to continue to grow. Adani Enterprises has an order book of 970 MW for FY21 from clients like SCCL, NTPC, EESL, and others. 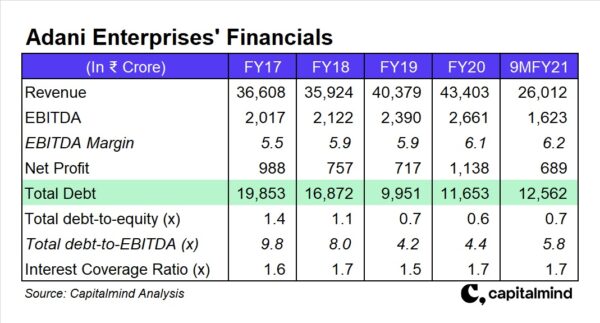 In the next two years, Adani Enterprises is expected to incur a capex of approximately ₹ 25,000 crore. Most of this will be spent on new businesses – ₹ 10,000 crore on airport business, ₹ 10,000 crore on data centres, defence sector projects, Carmichael coal mine, and others, and ₹ 5,000 crore on mining business.

Adani Enterprises will be spending most of its planned capex on new businesses which are either highly competitive or history has not been encouraging. GMR and GVK groups, which won prized airport privatisation contracts in 2005, did not recover from their debt-fuelled expansion. The defence sector is stacked with numerous players from both government and private space. To name a few on the government side – Bharat Dynamics, Hindustan Aeronautics, MIDHANI, Mazagon Dock, and in the private space – Tata Group, Mahindra Group, L&T Group, Kalyani Group, Hinduja Group.

Even in the data centre business not only India’s largest telecom operator – Reliance Jio – is in the works to build one in UP, but space is already crowded with the likes of Hiranandani Group controlled Yotta Infrastructure, Bharti Airtel and Carlyle Group controlled Nxtra Data, Tata Communications, Sify Technologies, Netmagic and others.

One needs to closely watch the development of these new businesses.