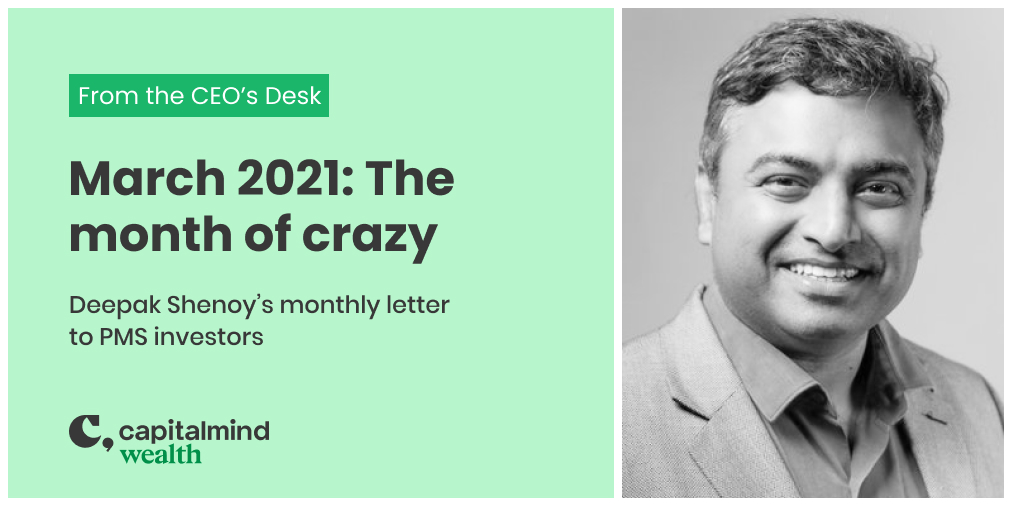 The Indian budget revealed one big thing: the government is going to borrow a lot more money. From a 7 lakh crore of planned borrowing last year, we’ll see over 12 lakh crores borrowed in the coming year. Add to that the woe of inflation, and interest rates in the bond market – better known as “yields” – have risen sharply. The government used to borrow at 5.8% and now it’s borrowing at 6.2% or more.

This has also seen echoes elsewhere in the world. When Joe Biden was sworn in, in January, yields in the US were less than 1%. Now they have moved to 1.5%. Everywhere, people are paying a little more to borrow.

How does this impact stocks? In the beginning, it didn’t seem to. After all, what’s a little rise, you might think. 1.5% is what it was before Corona in the US. Even in India, the yields are just about where they were before the RBI cut rates.

Note: RBI cutting rates doesn’t necessarily mean the market will demand lower rates. The market – with the pricing in the 10-year bonds – thinks about how the RBI is likely to react going forward. That’s why right now the system sees short-term borrowing (less than 90 days) at about 3.3% while longer-term borrowing has gone to 6%+. For corporates, rates are even higher.

Stocks eventually will be impacted. They did see a bit of a fall, with the Nifty falling about 6%, and the US Nasdaq falling about 11%. This is the fear that rates will go up and that liquidity will be reduced by the central banks.

Why? Because if people see inflation as a problem, or government borrowing going too high, there will be a point at which interest rates will have to rise. But inflation is not because of money printing – that’s been happening for ages. Inflation’s because investors think that people will actually get to spend that money, demand will go up and prices will go up. This is visible in prices of other “things” – like crude oil prices, copper prices and so on.

In effect, the market is spooked that there is going to be an actual recovery and that the price of everything will go up. This could well be true, of course. Prices can rise sharply. Interest rates can continue to go up. So much that not just the Indian government but also that of the US, Japan and Europe pay higher interest rates on their debt. This would render everyone bankrupt almost instantly because they can’t afford to pay – they’re far more leveraged than India is. The entire world collapsing in a heap is not useful as a bet, though prediction of doomsday is the third oldest profession in the world. It doesn’t happen, but not for the lack of trying.

Putting doomsday predictions aside, what else is likely?  Copper and Crude which are up a lot, are traded assets, and prices can easily go up for speculation as much as for real demand. In crude, you have an unnaturally cold situation in Texas, and US oil production has fallen 40% as wells has to be shut for lack of power (the irony!) and for the freezing weather. Finally, crude oil wells seem to start strangely fast when prices cross the $65 barrier – and indeed, crude prices were at $80+ three years ago, when new supply came in so strong that oil crashed to the 40s – a year before Corona hit us.

(For India the problem is that our government raised fuel taxes so much that we feel the pinch largely due to the increased tax. But again, they’re not blind to it, so there are some expectations of a cut in prices soon)

Copper prices are usually a harbinger of inflationary expectations, and while prices are high, they’ve been higher over a decade ago. A decade of money printing hasn’t hit the most useful industrial commodity, until now – will it sustain? We’ll have to wait and see.

For India, the clear problem remains in fuel prices, not in much else.

We expect the following things to happen:

In simple English: By the end of 2021, bond yields in India and abroad are likely to be lower than today. So we keep our government securities positions as they are, for now. Adverse news will mean we will take action, of course.

Looking at the listed non-financial data in the country, it appears that:

The point: This is not a very enthusiastic recovery from an economic standpoint. It’s like saying if you only eat twice a week, you’re going to have more money saved. Sure, cutting down on eating makes you healthier when you’re fat. But at some point, you might be cutting out on the nutrition required to keep the engine going – and the economy, we fear, is seeing some of that. In the form of increased profits, but no credit growth or industrial capex.

Having said that, the total profit pool for all listed corporates in India is about Rs. 500,000 cr. added up. This is half of what Apple holds in cash, worldwide. The next 10 years should see this profit pool grow substantially from here, just as India gains relative size compared to the west.

A quick note about some of the portfolio action we’ve seen:

How can we not say something about Bitcoin

The big mover so far has been Bitcoin and we expect some action on that by the government in this month. There might not be an outright ban, but it’s quite likely there will be restrictions on trading or owning the cryptocurrency. It’s a strange beast, that. Because it is unlikely to ever succeed as a currency by itself – it can only be an asset, measured (to great happiness) in another, more accepted currency. Put another way, if you measured your income in bitcoin, you have had the biggest loss in income ever. And you won’t like that, so you’ll measure it in rupees/dollars instead. If most of the things you paid for were listed in bitcoin, they’d have to be marked lower and lower in price every month, otherwise, they become unaffordable. Asset, not currency, will be the way to go. Maybe they’ll change the name to crypto-assets instead.

Sadly, we can’t invest in it (SEBI Rules) so our interest, however regretful, will be as a spectator.

The rest of the year will have to be spent looking for data points where either central bank policy will reverse or governments will find better ways to finance themselves. Regardless, the next ten years should continue to see a large benefit of financialization and of greater productivity. We just have to ride the volatility over. 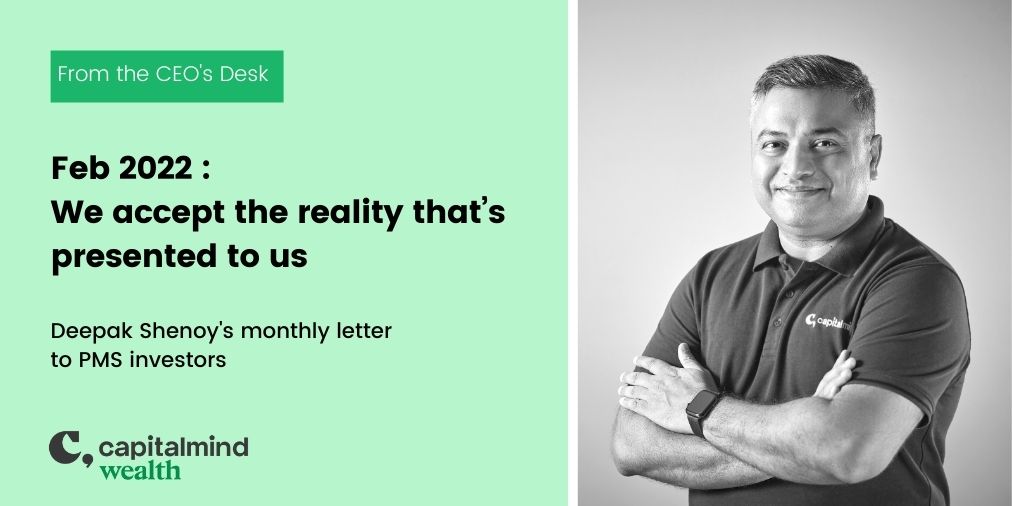 We accept the reality that’s presented to us 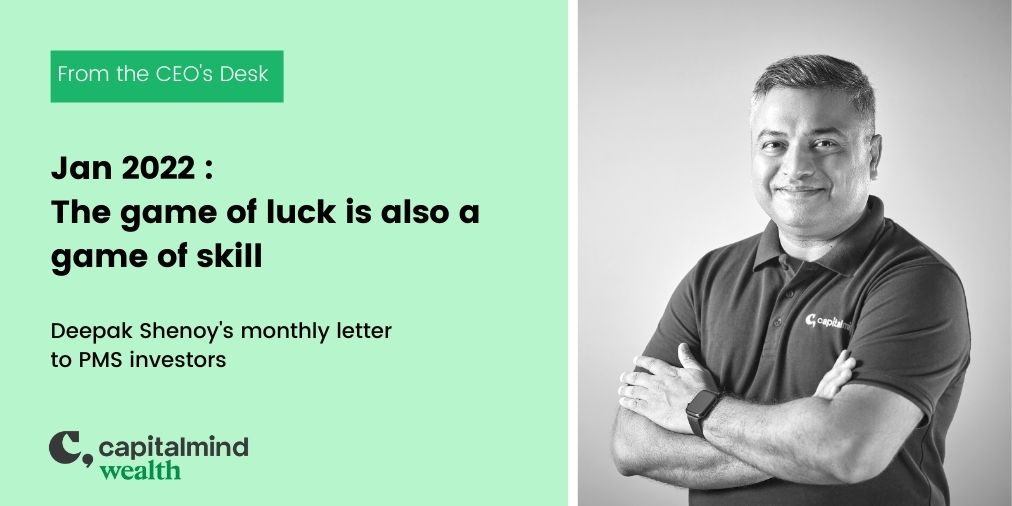 This is an excerpt from the Jan 2022 letter to Capitalmind PMS ... 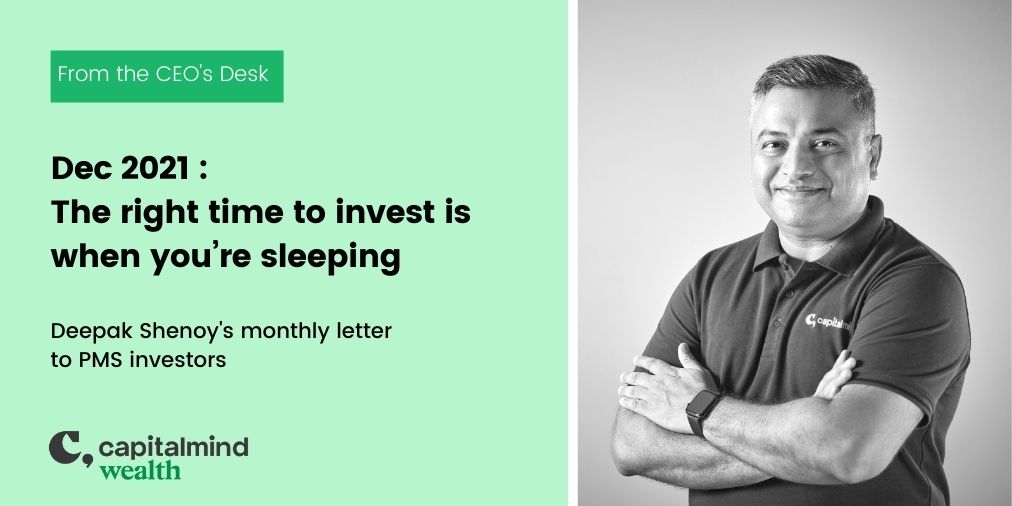 Wealth Letter Dec 2021: The right time to invest is when you’re sleeping

Is it the right time to invest? We get this question all the time, but there’s no universal answer. If you have money that you must invest, you’re only ...