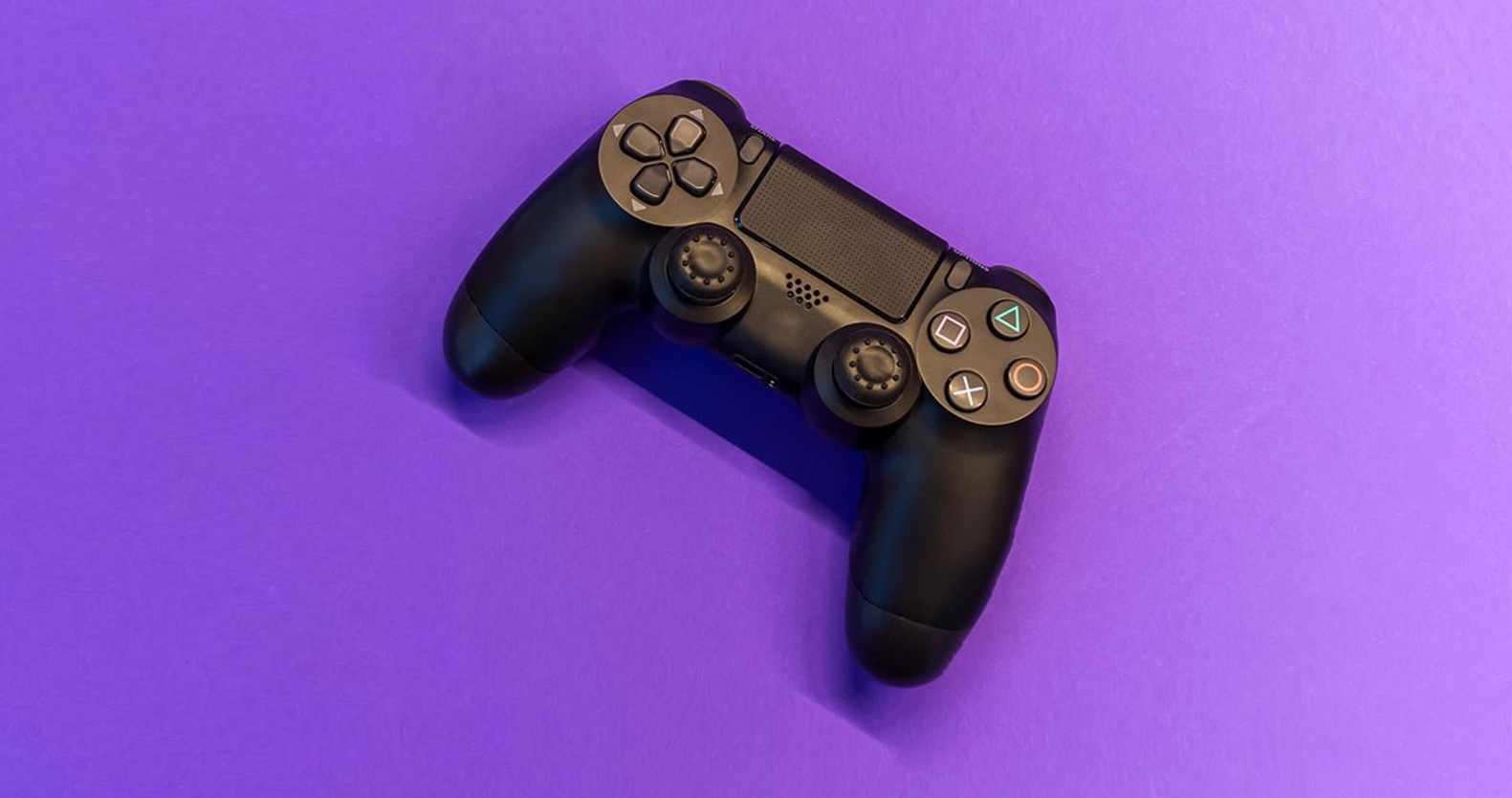 [This is a Premium article, unlocked for unrestricted access]

Investors and promoters of the Mumbai-based gaming company – Nazara Technologies Ltd. – are trying to make the most of the bull market in India, as it launches its initial public offering. This is Nazara Tech’s second attempt at an IPO. The company had filed a draft red herring prospectus in 2018 but decided against the listing citing market uncertainty. 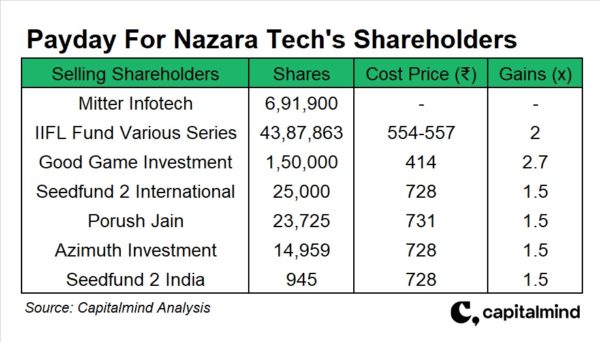 The company is looking to raise close to ₹ 583 crore from the primary market via an offer for sale. The company is offering close to 52.9 lakh equity shares at a price band of ₹ 1,100 to ₹ 1,101.  Its promoter will be diluting its stake to 20.7% in the initial public offering from 23%. Post listing the company will be valued at close to ₹ 3,353 crore.

Nazara is a leading diversified gaming and sports media platform with a presence in India and across emerging and developed global markets such as Africa and North America. Its offerings include interactive gaming, eSports, and gamified early learning.

Nazara’s business can be split into five key segments.

It comprises income from early learners and their parents subscribing to gamified content on Kiddopia apps. The company entered this segment in North America through their flagship gamified early learning app, Kiddopia, which they acquired in FY20. Through Kiddopia, they cater primarily to children aged between 2-6 years. It delivers an immersive self-directed learning experience through gamification, integrating expertise in developing engaging gaming experiences with the education needs of children.

Nazara acquired Nodwin Gaming in FY18, which is among the few companies that have championed eSports in India, owing to its strong relationships with global gaming publishers and platforms. It is currently dominating the Indian eSports market with over 80% of the total market share.

It has exclusive partnerships with Electronics Sports League and manages gaming events such as the ESL India Premiership, KO Fight Nights, etc. They have formed several partnerships, most notably with the Indian telecom giant Bharti Airtel which covers all NODWIN tournaments across gaming titles of PUBG Mobile, Counter Strike: Global Offensive, Clash of Clans, FIFA, etc.

E-Sports segment also includes Sportskeeda which is the largest sports news destination website in India, with content across E-sports as well as traditional sports such as WWE, cricket, soccer, and other sports.

Monetisation in telecom subscriptions is undertaken through periodic – daily, weekly, or monthly – subscriptions by their subscribers, through carrier billing, pursuant to their arrangements with telecom operators. 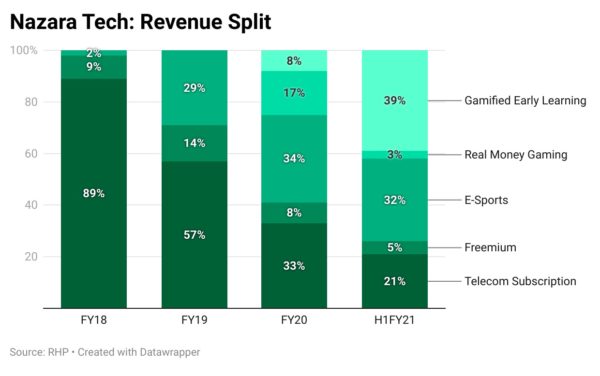 It comprises payments received from various advertisement networks for including advertisement in their freemium games, which are available on leading app stores. It includes free-to-play sports simulation games and children’s games, such as games designed based on cricket, carrom, table tennis, and bowling.

World Cricket Championship, the cricket gaming franchise, is the largest mobile-based cricket simulation game and they have launched WCC 3, the third edition of this franchise, in 2020

Developed by Nextwave Multimedia, a subsidiary of Nazara, WCC games have seen tremendous success since their launch in 2015.

Revenue comes from charging platform fees from the players playing Nazara’s skill-based games. With the acquisition of Halaplay and investments in Sports Unity, the company is participating in sports fantasy gaming and trivia games. It is also engaged in the business of real money gaming in Kenya, under a valid bookmaker off-the-course license issued by the Betting Control and Licensing Board, Kenya.

However, in recent years, the Indian government and courts have expressed concern over games that involve any real money. Hence, the company is not keen on growing this business until there is some clarity on regulations.

The company has so far not announced dividends in the last two financial years.

Over FY17-20, the company’s revenue growth was close to 9.2%, while its EBITDA and net profit declined over the same time period. The growth in revenue was largely on the back of two acquisitions in the e-learning (Kiddopia) and real money gaming (Halaplay) in FY20.

In H1FY21, revenues have already reached ₹ 200 crore as the pandemic led lockdown across various markets resulted in faster adoption of online gaming, especially on the e-learning and e-sports side.

The company’s EBITDA and net profit declined due to a fall in revenue from the telecom subscription segment and due to higher advertising costs. Revenue from telecom subscriptions started to decline as Indian telecom players started to offer free services as a part of their bundled offerings which resulted in a fall in the number of subscribers who pay for such gaming services.

Now as the telecom subscription segment was a high margin business, a fall in the revenues impacted the EBITDA. Thus, due to a change in revenue mix, the company’s EBITDA was impacted. Among various business segments, telco subscription remains the most profitable vertical. The Freemium model has also witnessed improvement in EBITDA margins in H1FY21. Real money gaming where Nazara is defocussing due to increased regulatory uncertainty, remains highly non-profitable while the early learning segment continues to improve EBITDA margins with rising scale. E-sports has been a steady margin profile business over the years.

Advertising expense is the major expense of the company. In FY20 and H1FY21, nearly half of the total expenses were pertaining to advertising. This in the future could help drive strong topline growth for the company.

A large part of Nazara’s operating cash flow has been utilised in making acquisitions over the years. Its working capital days have improved in FY20 with a rise in creditor days even as receivable days reduced. Nazara has maintained a healthy cash balance over the past three years despite making several acquisitions as its telco subscription business continued to generate strong cash flows.

Nazara has been the most aggressive investor in the Indian gaming ecosystem and has invested over ₹ 300 crore in the last five years on multiple assets with Paper Boat (Kiddopia), Nodwin (e-Sports), and Next Wave (Freemium) being the largest acquisitions. 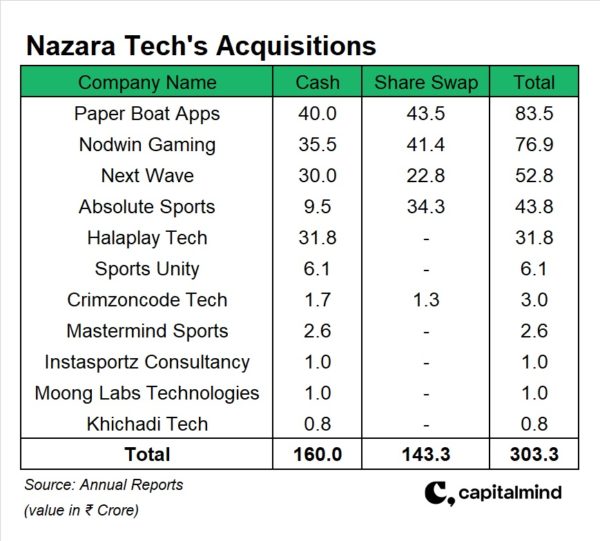 The company has no listed peer in the Indian market. However, the industry is fiercely competitive with consumer preference changing overnight. Some of its global peers include the likes of Tencent Holdings, Activision Blizzard, NetEase, Electronic Arts, Ubisoft Entertainment, Zynga, and others.

Global gaming and eSports companies are trading at an average EV/Sales of 4.3x, while Nazara at the upper end of the price band is asking for a valuation of 7.8x on annualised FY21 sales. The gamified early learning business looks to have better growth potential as it relies heavily on paying consumers and its increased presence in the U.S. is an advantage due to higher willingness to pay vs emerging markets. However, as the willingness to pay for content develops in emerging markets, the market size will increase. Moreover, children’s content tends to have a stickier subscriber base and with Covid-19, the use of such learning apps will keep on increasing.

The casual gaming business in India lacks a loyal subscriber base. It remains highly fragmented and competitive with a limited shelf-life and needs continuous investments. Real money gaming is slightly better, due to interest level from the consumer perspective. However, due to regulatory uncertainties, investments are limited in this division. Given the sharp rise in digital consumption led by favorable demographics, this segment will continue to grow.

E-Sports is new in India. Due to the lack of serious gamers in India Vs globally, it remains to be seen how the company scales-up this segment. In India, live cricket will continue to have an edge over other sports. However, Nodwin has a first-mover advantage in this segment and could stand to benefit when interest among users increases.

Telecom subscription business declined in the recent past, as India started adopting bundled plans. Other emerging markets could well likely see similar trends in the future which could impact its revenue. Given that it is the most profitable segment, the impact on the bottom line would be higher.

Over the last three fiscals, the company has changed its gears and entered newer business segments with high growth potential through the inorganic route. Though this growth has come at the expense of margins and return ratios, that is the only tried and tested way to scale-up in the gaming industry.

All the past acquisitions were funded through internal accruals. Given its high cash balance and cash flows coming in from the telecom subscription business, the company could continue to adopt this strategy.

The key risk that the company faces, is the rapid technology change. The company has witnessed the impact of this in its telecom subscription business in the past.

The company’s IPO will be the first pure-play gaming company that would get listed on stock exchanges. And on the back of this, not only the expensive valuations would sustain, but it might also see a strong listing.

We would advise investors to “subscribe” with a long-term view and add the stock to their portfolio as the financial performance comes through. For retail investors, it might get difficult to get an allocation, as the portion reserved is just 10% (this is because the company was not profitable).

Other recent IPO’s we reviewed