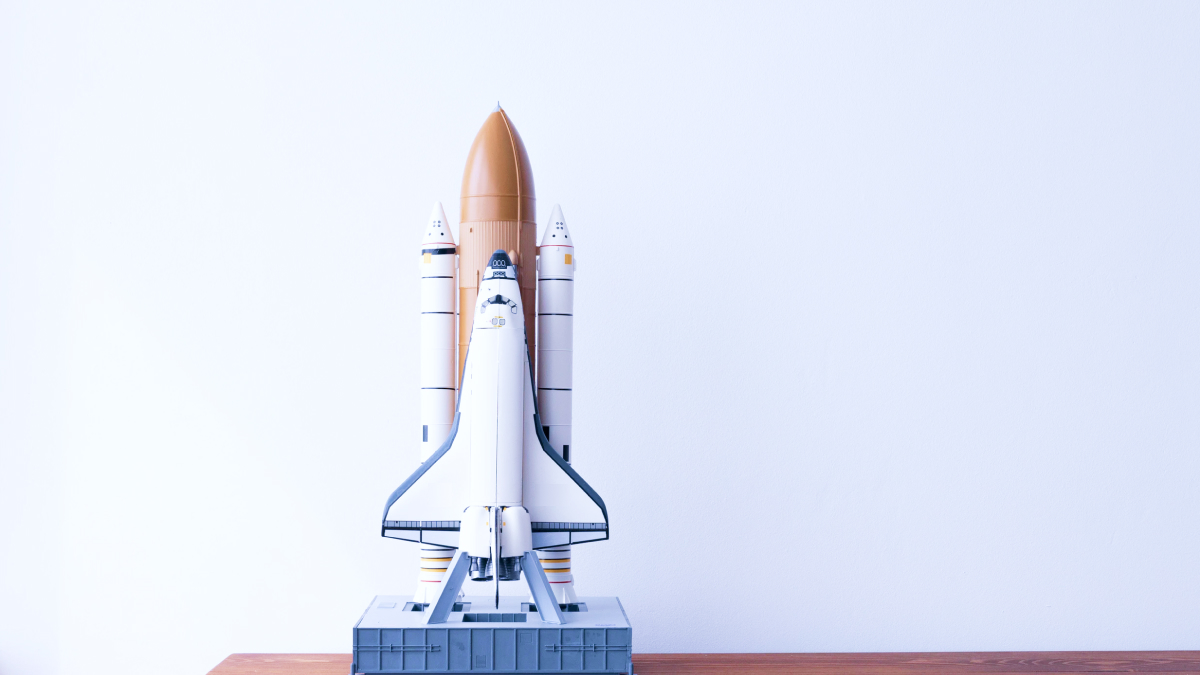 Two months into 2021 and the EIGHTH new kid on the block is trying to make the most of the bull market in India.

MTAR Technologies Ltd. – a speciality engineering firm – has launched its initial public offering. Yet again, the majority of the funds raised will be going to exiting investors.

So far in 2021, ₹ 9,509 crores have been raised from the primary market. Of which, 58% were through an offer for sale, while the remaining 42% actually went to the company. However, this number is far better than in the previous few years. 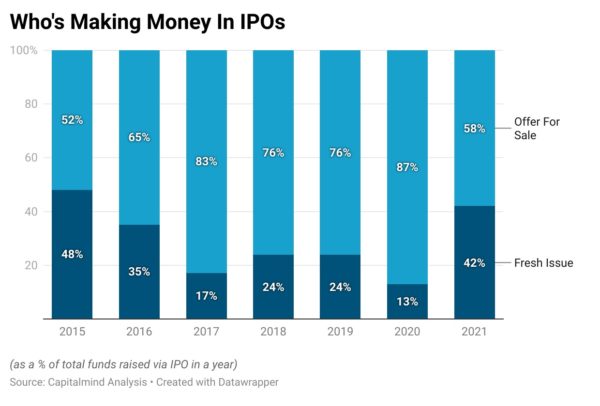 The company is looking to raise close to ₹ 596 crore from the primary market via a combination of fresh issue and offer for sale. The company is offering 1.03 crore equity shares at a price band of ₹ 574 to ₹ 575. The company had also raised close to ₹ 100 crore from different funds of SBI MF and Axis MF in pre-IPO placement. The shares were offered at ₹ 540 each – a discount of 6.5%.

The company plans to use the fresh issue proceeds and the funds raised from pre-IPO placement towards debt repayment and to fund its working capital requirements. As of December 31, 2020, the company had a debt of ₹ 149 crore and the company plans to retire a little more than two-fifth of this through IPO proceeds. On average, the interest rate on these loans is close to 10%. Thus, a debt repayment could result in interest cost savings of nearly ₹ 6 crore annually.

Also, with the fund available for working capital, the company’s dependence on financial institutions for short term loans would reduce which should also translate into interest cost savings.

Its promoter will be diluting its stake to 50.3% in the initial public offering from 62%. Post listing the company will be valued at close to ₹ 1,800 crore. 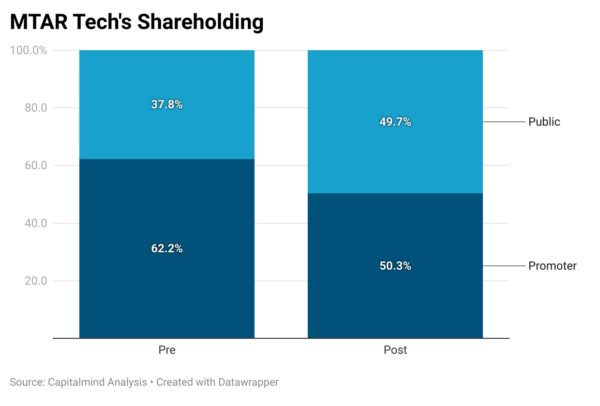 Currently, the company has 7 manufacturing facilities in Hyderabad, Telangana, including an export-oriented unit, that undertake precision machining, assembly, specialized fabrication, brazing and heat treatment, testing and quality control and other specialized processes. It is also in the process of setting up an additional manufacturing facility in Hyderabad which is expected to become operational in FY22.

It currently has a wide range of complex product portfolios meeting the varied requirements of India’s nuclear, defence and space sector. ISRO, NPCIL, DRDO, Bloom Energy, Rafael and Elbit etc. are some of its esteem clients.

Clean energy is one of the key customer sectors and MTAR is involved in the manufacturing and specialized fabrication of critical assemblies to customers such as Bloom Energy, Andritz, among others. MTAR supply power units, specifically hot boxes to Bloom Energy USA with which, it has been associated for over nine years. Currently, it is involved in the development and manufacture of hydrogen boxes and electrolyzers for Bloom Energy.

MTAR is the only supplier to Bloom from India as of FY20. Bloom is one of the largest and the fastest-growing player globally in the hydrogen fuel cell segment and has 70% of its revenues coming from the products segment and a balance from services.

MTAR has been associating with the Nuclear power corporation of India for the past 16 years, which controls all operational, under construction and planned reactors in the country given India does not allow private participation. 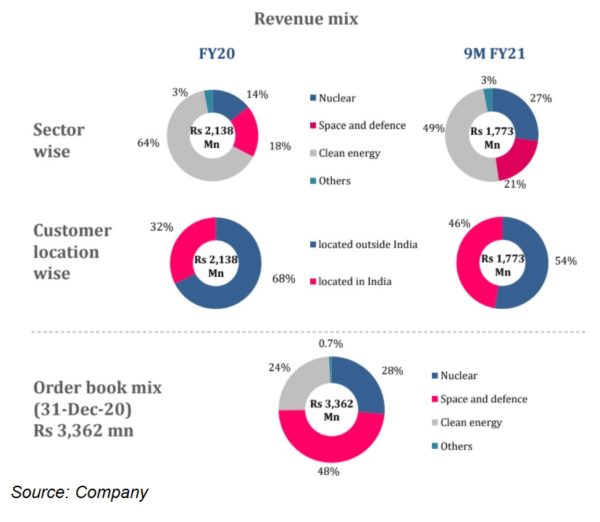 Over the past four decades, MTAR has played a prominent role in the defence sector and supplied hi-precision indigenous components, subsystems, systems in India’s defence and aerospace programs. They have also been associated with ISRO over three decades to whom MTAR have been supplying a wide variety of mission-critical assemblies for its various missions.

The total order book of the company as of December 31, 2020, was close to ₹ 336 crore, of which nearly half was from the space and defence sector. Its order book was 1.6 times its FY20 revenues and it has been growing over the years.

The company had a debt of ₹ 149 crore which would be reduced to ₹ 86 crore. Thus, its total debt-to-equity would be 0.2 times.

The company has so far announced dividends only in the last two financial years.

Over FY15-20, the company’s revenue growth was close to 17%, while its gross profit grew at a rate of 19%. As most of the cost is fixed in nature, with rise in revenue, company’s EBITDA grew at a higher rate. This coupled with a lower tax expense in FY20, led to a 140% growth in its net profit.

The profit has been lower in FY20 compared to FY19 due to exceptional gain and tax rebate accounted for in FY19.

Employee cost is one of the major expenses of the company. It accounts for nearly 30% of its total expenses. MTAR had a positive operating cash flow over FY18-20, which increased by 97.4% CAGR to ₹ 56 crore in FY20. The average operating cash flow during the period was around ₹ 38 crore.

The company’s asset turnover ratio has been dismal, while its cash conversion cycle is elongated. Return ratios are fairly reasonable. 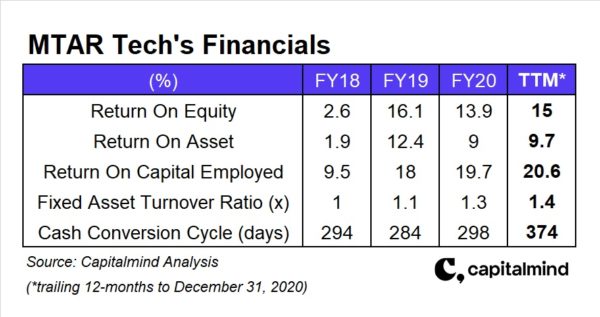 There are no direct listed peers catering to all the three segments similar to MTAR. However, the company does face competition from domestic and foreign players for its individual segments.

According to the company, its competitors in the nuclear sector are Larsen & Toubro Heavy Engineering and Godrej & Boyce Manufacturing Company Ltd. and, in space & defence sectors are Larsen & Toubro, Godrej & Boyce Manufacturing Company Ltd., Hindustan Aeronautics Ltd., and Walchandnagar Industries. In the clean energy space, MTAR was the sole supplier from the Indian market to Bloom Energy in FY20.

The price-to-book ratio falls by half as the company has raised ₹ 100 crore from pre-IPO investors and is looking to raise ₹ 123.5 crore in the IPO. 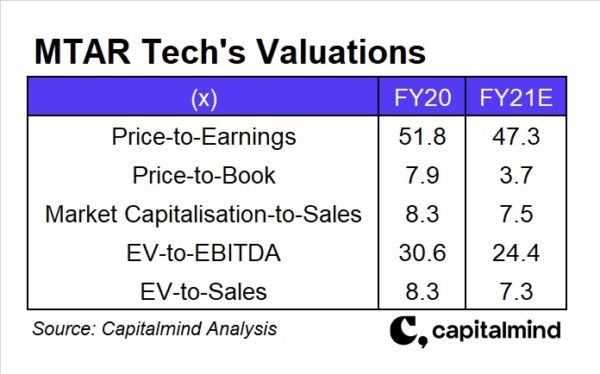 The Indian government has demonstrated its focus on indigenization of defence technologies. It announced an import ban on 101 defence-based items and has mandated the use of 50% of indigenous content in defence goods. It has also sanctioned the manufacture of 10 fleet reactors with a combined generation capacity of 7,000 MW.

With the improving acceptance of clean energy, the outlook of MTAR’s focus sector seems to be bright. Its sole customer Bloom Energy is planning to expand its operations in the South Korean market. Also, MTAR has signed an MoU with a CPSE to deploy fuel cell technology in India by using natural gas as fuel.

The company’s new manufacturing facility, which will be operational in FY22, shall be a sheet metal facility that shall allow MTAR to undertake sheet metal jobs for Bloom Energy, ISRO and certain other customers.

Competition will always be a threat, but as the company has been able to maintain a long-standing relationship with most of its customers and has developed strong expertise, it is less likely to lose out on these upcoming opportunities.

MTAR’s second biggest risk is client concentration. The company depends on Bloom Energy and a limited number of other customers for a significant portion of its revenue. Moreover, the company does not have long-term supply agreements with its customers. If its customers choose not to source their requirements from it or manufacture products in-house, its business and results of operations may be adversely affected.

Other concerns are an elongated cash conversion cycle, low fixed asset turnover and exchange rate fluctuation as more than 50% of its revenue comes from exports.

Despite these risks, we still cannot rule out the possibility of healthy double-digit growth in subsequent financial years on the back of the above-mentioned factors.

At FY21 annualised earnings, the IPO looks aggressively priced. Earnings growth of 20-25%+ cannot be ruled out in the coming fiscals, which may support premium valuations.

Considering the company’s expertise in providing a wide range of precision engineering products with complex manufacturing capability, high entry barrier, strong balance sheet & management and presence in a high-growth sector, one can SUBSCRIBE to the IPO with a long-term view.

This article is for information and should not be considered as recommendation to buy or sell any stock.

Capitalmind Premium subscribers get access to four model portfolios, actionable strategies, premium research, and the vibrant subscriber community. Sign up to be part of the best investment research platform in India. For a limited time, use code NEW2021 for a 15% discount on the annual plan