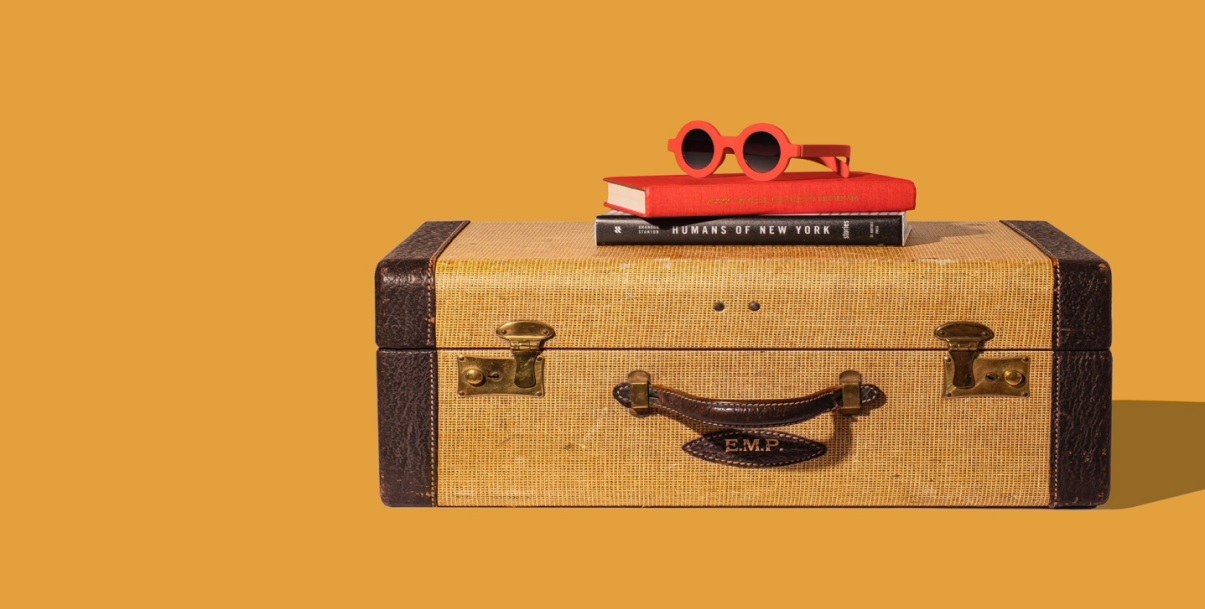 [This is a Premium article, unlocked for unrestricted access]

The ₹ 510 Crore Easy Trip, known for the easemytrip travel website,  IPO kicks off today. An online travel agency (OTA) that generates its revenue from selling air tickets is listing at a time when air traffic in India is still 2/3rd of normal demand.

We can expect the unexpected in a BULL market.

An online travel agency (OTA) that generates most of its revenue by selling air tickets is coming out with an IPO when air traffic in India is still at 66% of the normal. Moreover, the entire travel industry is not even expected to recover significantly even in the next financial year.

Despite the subdued flying conditions, India’s second-largest OTA – Easy Trip Planners Ltd. – is looking to list on the Indian bourses as it opens its initial public offering on March 8. The IPO could well likely see strong demand in the primary market and list on the bourses at a premium similar to the six out of the seven companies listed on the bourses in 2021.

Two out of the three promoters of the company will be offloading their stake to raise ₹ 510 crore from the primary market via offer for sale. The company is offering 2.7 crore equity shares at a price band of ₹ 186 to ₹ 187.

Its promoter will be diluting its stake to 75% in the initial public offering from 100%. Post listing the company will be valued at close to ₹ 2,000 crore. 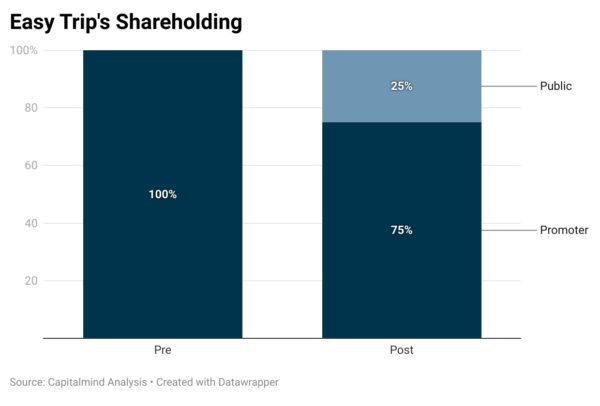 Easy Trip Planners Ltd., the holding company for online travel portal easemytrip.com. It offers a range of travel-related products and services for end-to-end travel solutions, including airline tickets, hotels and holiday packages, rail tickets, bus tickets, and taxis as well as ancillary value-added services such as travel insurance, visa processing, and tickets for activities and attractions.

The company primarily earns revenue in the form of commissions and incentives from the airline tickets booked by customers. Commissions and incentive payments include performance-linked bonus, which is received from distribution service providers and certain airlines as well as credit card companies on a periodic basis, generally based on the volume of sales. It also earns revenue from convenience fees, cancellation service charges, rescheduling charges, and advertisement revenue.

As of December 31, 2020, it provided access to more than 400 international and domestic airlines, more than 10 lakh hotels in India and international jurisdictions, almost all the railway stations in India as well as bus tickets and taxi rentals for major cities in India.

The company generates a majority of its revenue from selling airline tickets followed by hotel and holiday packages. Over the years, the company has been increasing its focus more on the hotel business as the same is a high margin business. Hotel bookings revenue contribution has increased from 1.7% in FY18 to 5.4% in FY20.

The company has three distribution channels:

B2B2C: agents booking for their consumers

The company has been providing customers with the option of a no-convenience fee. Customers are not required to pay any service fee in instances where there is no alternate discount or promotion coupon being availed.

Generally, other OTAs – MMT and Yatra – charge a convenience fee of ₹ 290-300 per person, while booking a flight ticket. Thus, customers save this charge while booking a flight from easemytrip.com. However, if a customer, cancels a ticket booked via easemytrip.com, he/she will be charged a cancellation fee of ₹ 300. This is not different from what other OTAs do. They just don’t refund you the convenience fee charged if a flight ticket is canceled.

Thus, in short, other OTA charges a convenience fee, while EaseMyTrip charges a fee only if one cancels a flight.

On the other hand, EaseMyTrip offers external discounts, but if a customer opts for the same, he/she will have to pay a convenience fee of ₹ 300.

Thus, in short, a customer benefits from booking on EaseMyTrip, if other OTAs are not providing any internal discounts. 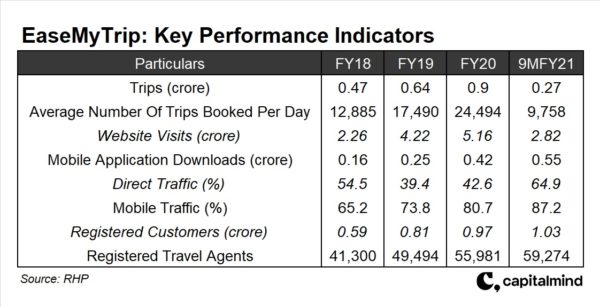 The net worth of the company, as of December 31, 2020, was close to ₹ 134 crore, translating to a book value of ₹ 12 per share on a diluted basis. Easy Trip is a debt-free company with a high cash balance on its book.

Its cash balance as of December 31, 2020, stood at ₹ 141 crore, translating to a book value of ₹ 13 per share on a diluted basis. The company has so far not announced any dividends but going forward it plans to use this cash for dividend payment and for investing in the business.

Claims written back form a major part of the company’s other income. According to the company, this is unadjusted credits from airlines related to cancellation fee amount which the company records as revenue after two years from the refund date. The company also claims the same to be a regular income and a normal revenue line item. However, due to accounting policies, it is shown under other income.

The company has not provided any clarification on why this regular income (claims written back) is accounted for and/or received 2 years post accrual. If it is a cancellation fee, then the same is being collected or should be collected by EaseMyTrip at the time of cancellation. Then why is it being accounted for 2 years from the refund date?

For example:- If I book a Delhi-Mumbai flight for March 11, the flight charges come to ₹ 5,600. Now if I cancel the ticket 72 hours or between 72-4 hours before departure, the cancellation fees including EaseMyTrip charges would be lower than the flight charges. This means that the OTA will have to refund me the balance amount. 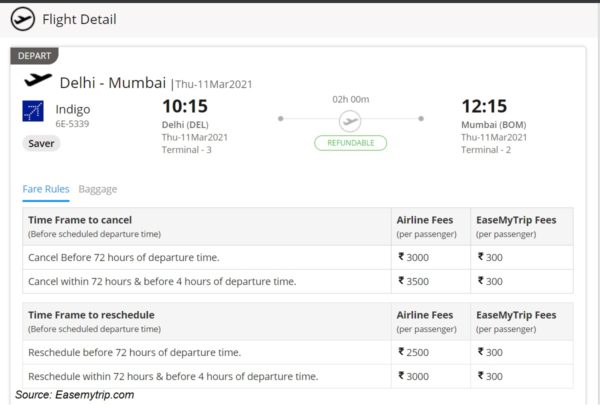 Being a rational human, if I cancel my travel plan just 3 hours before departure. It would be prudent of me to not cancel the ticket as the same would not lead to any extra charges being borne by me.

So far, the income recorded from claims written back has been erratic in the brief financial past presented. 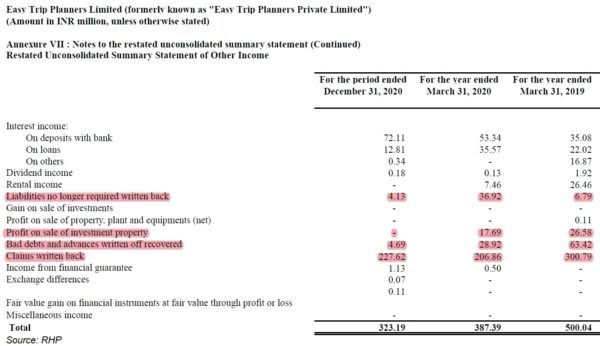 Along with this, because of high cash on books the company earns higher interest income. Also, in FY20, items like written back liabilities recovered bad debts and gain on sale of property added nearly ₹ 8.4 crore. This in turn has supported its earnings.

In FY19, these line items added close to ₹ 10 crore to other income. So far in 9MFY21, the earnings contribution from the above-mentioned line items was miniscule. The 9MFY21 numbers would look impressive on the operational and bottom-line front. However, we have some reservations over the same.

Most of the cost savings in the 9MFY21 period have come because of an absence of service cost, commission expenses, and credit card charges and due to lower salary and advertisement cost.

Salary expense was lower as the company had asked managerial employees to forego a part of their salary during the pandemic. However, the same was reinstated at a later stage. This means that the salary cost won’t remain low going forward.

Advertising costs were lower due to lower travelling activity for the better part of the year. However, its unlikely that the costs will continue to remain lower going forward.

Coming to the missing expenses:

“Service cost primarily consists of costs paid to hotel and package suppliers for the acquisition of relevant services and products for sale to customers and includes the procurement cost of hotel rooms and other local services such as sightseeing costs for packages and local transport costs and other costs of providing services; it does not include any component of personnel cost, depreciation or other operating costs.”

The RHP and a query sent to the company failed to answer the question – why is this expense not incurred in 9MFY21?

Over FY18-20, the company has continuously incurred commission costs and credit card charges. However, in 9MFY21, these expenses are so far not accounted.

Again, the RHP and a query sent to the company failed to answer the question – why is this expense not incurred in 9MFY21?

We failed to understand why these expenses would not incur in 9MFY21. There is a possibility that these expenses could be accounted for at the end of the financial year. 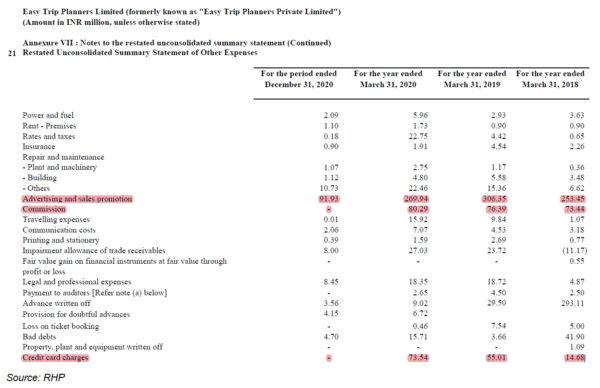 Historically the company has financed its working capital requirements and fund for expansion of business and operations primarily through internal accruals, equity infusion from promoters, and debt financing. In FY20, the company’s net working capital days has increased which could be because of the pandemic. 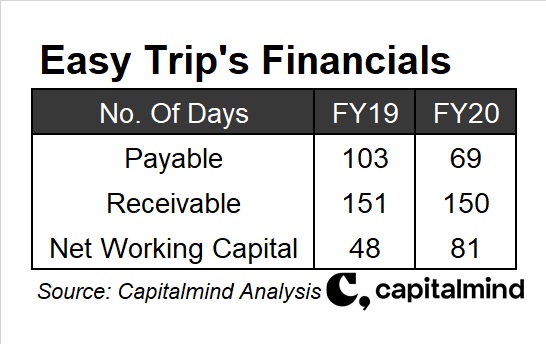 The company faces a lot of competition from online and offline travel agencies, not only domestic but also international. It is difficult to list the number of offline travel agencies in India as they are plenty. Similar is the situation when it comes to OTAs. However, to name a few on the online side – MakeMyTrip, Yatra, ClearTrip, Tripadvisor, Booking.com, Expedia, Agoda, etc.

Of the many, only two Indian online travel companies – Makemytrip and Yatra – are listed on New York’s Nasdaq. So, in the listed space in India, the company has no peer.

Over the years, Easy Trip Planners has grown at a much faster rate compared to its older peers – MakeMyTrip and Yatra. Also, it is the only profitable player. Also, unlike, Easy Trip, its peers have been burning cash in the past. Only in the 9MFY21 period, the peers were able to generate a positive cash flow from operations. The reason behind the profitability can clearly be understood through this common size profit and loss account. Easy Trip’s lower cost structure is on the back of lower spending on the service cost, employee cost and marketing, and other expenses, as compared to MakeMyTrip and Yatra. 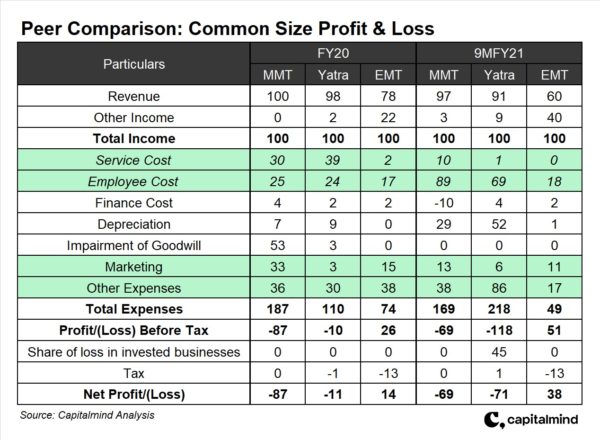 At the upper end of the price band, Easy Trip’s issue is priced at a premium to the average of globally listed peers.

Despite being profitable, the company did not meet the required parameters of listing guidelines and hence has kept 75% of the IPO allocation to QIB. This could be because the company did not have a minimum average pre-tax operating profit of ₹ 15 crore, during the 3 most profitable years out of the immediately preceding 5 years.

Past financials have been inconsistent. The majority part of the earnings is supported by claims written back, and other components of non-core income. If we exclude the other income, the effective earnings will drop sharply, and valuations would look much more expensive.

Moreover, the travel products and services industry is highly competitive. Travellers have a range of options, both online and offline, to research, find, compare, plan and book air, packages, hotels, and other travel product.

Easy Trip is competing against numerous established and emerging competitors, including other online travel agencies, traditional offline travel companies, travel research companies, payment wallets, search engines, and meta-search companies, both in India and abroad. Along with these, even large established internet search engines have also launched applications offering travel products in various destinations around the world.

Being the first company from the online travel service segment trying to get listed in the Indian market, it may attract investors and see a fancy listing.

We would skip this IPO, due to inconsistencies in its core earnings and the highly competitive nature of the industry.

Other Recent IPOs we reviewed:

And an older article that serves as a reminder: 91% IPOs trade below their issue price at some point

For unlimited access to our premium research, model portfolios, and vibrant member community, join Capitalmind Premium. Trial users: Use code LEVELUP to get 12 months for the price of 10. Limited time only.