Varun Beverages Ltd. is one of those companies which on listing failed to give investors any significant returns, but since then has been on a roll. The soft drink contract manufacturer listed on the Indian bourses in November 2016 at a discount to its issue price, but since then its share prices are up over 3.5 times.

The stock has also been a favourite of foreign investors as they have increased their holdings in the company to 20.5% from 8.2% four years back.

Varun Beverages is PepsiCo’s second-largest bottler outside the US. It handles over 90% of the cola giant’s India business. The company manufactures, bottles, and distributes PepsiCo’s carbonated and non-carbonated beverages and packaged drinking water. The company back then had a 44% market share in India and franchisee to sell PepsiCo’s products across 17 states and 2 union territories in India. Moreover, back then the company was also looking to expand its operations. 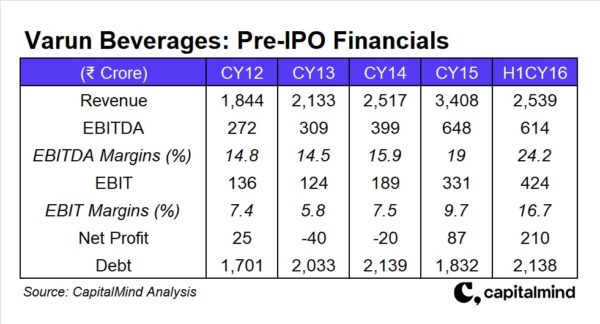 The financial performance was inconsistent with losses reported in the calendar year 2013 and 2014. The company did witness revenue growth on the back of expansion and acquisitions, but due to a change in depreciation rate which led to higher depreciation cost and interest cost the company reported losses.

Varun Beverages though present in the fast-moving consumer segment, does not come across as an FMCG company. It is more of a contract manufacturer.

Varun Beverages does not have any of the key operational and financial characteristics of a consumer business. Operationally, it has no pricing power, brand ownership, new product development, or control over raw material. These are the reasons which separate the company from being compared to any other in the consumer sector.

Varun Beverages has 100% dependence on PepsiCo for its revenues. PepsiCo at a time is playing as a raw material supplier, licenser, and franchisee partner. As per its agreement with PepsiCo, Varun Beverages is required to buy concentrates from Pepsi as well as pay a royalty of 5% on certain non-CSD products.

An aggressive expansion which led to a near-monopoly business and a fundraise to reduce debt aided the rally in the share prices of Varun Beverages. Since listing, Varun Beverages doubled its market share to 90% of PepsiCo India’s business. 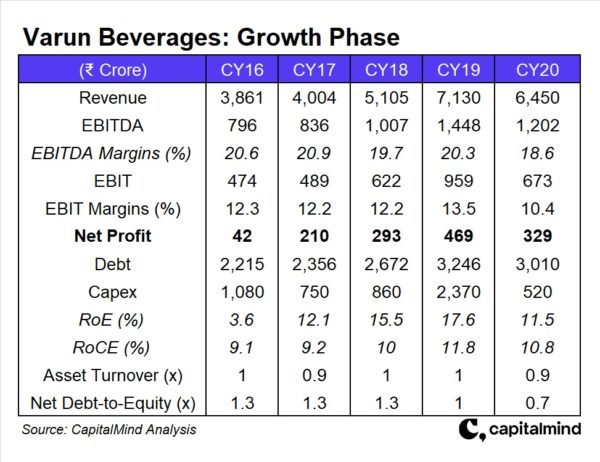 Expansion did aid the financials of Varun Beverages. Revenue grew at a CAGR of 22% over CY16-19 while operating margins remained range-bound. This strong revenue growth coupled with QIP helped the company in its expansion plans and lower its debt.

The April-June quarter is the peak season for Varun Beverages, wherein the majority of volumes are recorded. This is due to the seasonality nature of its business as consumption happens largely in May, which is the summer season. Thus, CY20 volumes were impacted due to the pan-India lockdown. CY20 net profit was also impacted due to an exceptional loss of Rs 67 crore due to impairment of few assets (non-cash item).

Hindustan Coca-Cola Beverages (HCCB) is a leading beverage manufacturer of India producing and distributing drinks under Coca-Cola India product. It is Varun Beverages’ direct competitor. Due to expansion and consolidation in markets, Varun Beverages has been able to grow its business better compared to HCCB. In 2019, Varun Beverages acquired PerpsiCo’s west and south operations wherein historically Pepsi has limited penetration as compared to north and east. The newly acquired regions from 57% of the soft drinks market and hence Varun Beverages would look to enhance its presence in these regions with new product launches and distribution expansion in order to expand volumes and gain market share.

Post-acquisition in 2019, these plans were halted in 2020 due to Covid-19 induced lockdown. However, with business returning to normalcy in 2021, expansion in these new territories should continue.

Varun Beverages has a distribution network of 1.75 million outlets, whereas Coca-Cola reaches 2.6 million outlets and overall there are 9-10 million retail outlets in India. With improving rural electrification, there remains immense growth potential for both players to expand distribution and grow volumes.

Annual capacity utilisation of Varun Beverages is way lower than its peak season utilisation rate of 60-70%, post-consolidation in new territories. With excess surplus capacity in place, the company has enough headroom to grow volumes without needing additional capex. With operations increasing, economies of scale should kick in and aid financials.

The management now plans to focus on improving its cash flow without any major acquisitions and reduce debt over the next three years.

More than two-thirds of the company’s revenue is generated from carbonated beverages. However, in carbonated beverages, the growth of cola drinks has slowed down, but growth in non-cola categories like lime, orange, etc. has remained strong. Key brands like Mountain Dew, Mirinda, etc. are relatively underpenetrated in India, and Varun Beverages will focus on pushing distribution of smaller units of these brands.

Along with this, non-carbonated beverages (NCB) are expected to also gain traction as consumers are becoming more health-conscious. Post commencement of operations at its new plant in Pathankot, Varun Beverages’ revenue share from NCB should improve, thereby reducing revenue concentration from carbonated drinks alone. International operations, which now account for 18% of total volumes are also bound to grow further.

Along with this, its business also faces seasonality issues. Summer is the most important quarter for Varun Beverages. Any adverse weather conditions or disease outbreak during this period will impact its performance. Lastly, in past, the economies of Zambia and Zimbabwe have been periodically impacted due to high rates of inflation and currency devaluations, which in turn have adversely impacted the financial performance of Varun Beverages.

Pre-IPO and post-IPO the company has grown its topline at a 22.7% CAGR partially aided by expansion. Even if we assume, that the company grows at half the rate (11%) over the next 3 years, revenues in CY23 would stand at close to ₹ 10,000 crore. At EBITDA margins of 20%, EBITDA will be close to ₹ 2,000 crore. The current enterprise value is ₹ 33,000 crore and the company trades at 17 times its EBITDA.

The company aims to reduce its debt as it has no major capex plans over the next three years. Lower debt will certainly result in lower finance cost, which should boost its profitability further. In CY19, the company’s net profit margin was close to 6.6%. Debt reduction over the period could benefit the net profit by at least 1.5 percentage points. Assuming net profit margins at 8%, net profit will be close to Rs 800 crore. The current market capitalisation is ₹ 30,000 crore and the company trades at 38 times its earnings.

At current prices, the valuations look pretty much full and hence we are not adding this stock to our long-term multi-cap portfolio. However, we would continue to track the stock and consider adding this in the future.

The objective of the below checklist is to look at important aspects of a company/business and see where the company stands on these fronts.

Can Varun Beverages stand the competitive intensity in the Industry?

It is a near-monopoly in PepsiCo’s India business and the only biggest competitor is Hindustan Coca-Cola Beverages. Over the years, PepsiCo’s market share has remained stable and now with the consolidation of territories by Varun Beverages, the market share could possibly grow in near future.

Is the company financially healthy?

The company has a net debt to equity of 0.7 times. Also, it aims to reduce its debt as it has no major capital expenditure plans. It has been generating cash flow from operations at least for the last 9 years. Despite doubling its market share in PepsiCo’s India business, its debt amount has remained under control.

So far there has not been any instance of misappropriation by the promoter. The company has also not entered into any materially significant related party transactions.

Who are the other key holders in the stock? Has there been a drastic change in key shareholders?

The promoter holding as remained at 66.4% for the last three quarters.

Is the stock cheap?

On a CY23 basis, the price-to-earnings and EV-to-EBITDA stand at 17x and 38x. The valuations appear to be full at current prices.

Can the current sales and earnings growth sustain?

The revenue CAGR over CY16-22 was supported by inorganic acquisitions. However, going forward, we don’t believe that such a high growth rate (22%) can be sustained. We are assuming a growth rate of 11% for the next three years on the CY19 revenue base.

On the bottom-line front, the growth could be higher as the company is looking to reduce its debt which would result in lower finance cost and boost its earnings.

We like the stock but don’t like the price. We will look at this stock carefully if it retreats into more reasonable valuations – consider this on our “long list” of stocks that we might add if pricing is better.

The authors at Capitalmind may have positions in the stocks mentioned, please assume our bias exists. This is not a recommendation to buy or sell securities.

For immediate access to the LT Multicap and our other Model Portfolios, join Capitalmind Premium