In the last 3 years, four companies had listed from the Indian Railways universe. While IRCON, RITES & RVNL had a decent listing, IRCTC went on to become a blockbuster. We wrote about IRCTC when it was added to the Multicap Portfolio in 2019.

There’s a new kid on the block. The lending arm of Indian Railways, IRFC is opening its IPO on Jan 18th.

Short Answer: Most IPOs that launch in overheated markets tend to also be overpriced and rely on market conditions to generate quick returns. We think this one is an exception.

The fresh issue of 3088.9 Cr will be used for strengthening the equity capital base & to meet the growth capital for the future.

The Indian Railways earns its internal revenue primarily from passenger and freight traffic.

Freight remains the major revenue segment for the Indian Railways. It utilises 1/3 rd of its capacity and generates 2/3rd of the revenues.

Passenger trains utilise two-thirds of capacity but generate only one-third of the revenues. Train travel remains the preferred means for long-distance travel for a majority of Indians. With urbanisation & increasing population, the passenger traffic is expected to grow further.

The British made significant investments in building the railway infrastructure. Post Independence, the network growth of the Indian Railways was constrained due to lower investments.

The Indian Railways face issues with overstretched infrastructure. Around 60% of the routes have more than 100% utilisation.

The need for capital investments

IRFC is the dedicated market borrowing arm of Indian railways. Its primary business is financing the acquisition of rolling stock. They finance the rolling stock, lease it to Ministry of Railways and collect rental payments on timely basis.

It is the largest financier for Indian Railways with a contribution of 48.2% of total fund raise in FY20. As of March 2019, IRFC had financed 85.4% of Locomotives, 85% of passenger coaches & 70.4% of wagons held by Indian Railways. 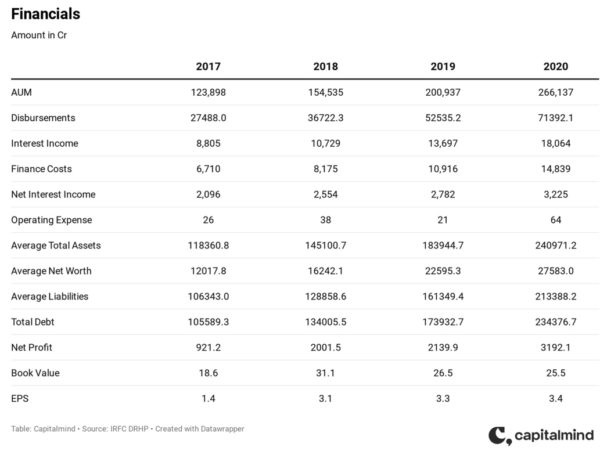 The company has long term AAA rating from all major credit rating agencies.

The total AUM consists of:

The company has strong Asset Liability management. They have positive ALM from 1 month to 5 year tenure.

There is a cap on their margins. They are entitled for 40 bps over the weighted average cost of borrowing for financing Rolling stock & 35 bps for Project assets.

The valuations are not expensive in our opinion.

The company should not be valued on AUM basis, given the leasing & asset transfer business model. The margins will remain in range given the cap on the spreads.

It is very rare to see a strong IPO with reasonable valuations in current market conditions. The management had left something for the investors on the table. One can subscribe for the IPO.

Given the growth prospects in Indian Railways and the strong fundamentals of the company, it can also be considered for long term as well.

Since our analysis is purely about the IPO, and does not consider your specific financial goals and risk profile, please consult an Investment Advisor before taking any action.