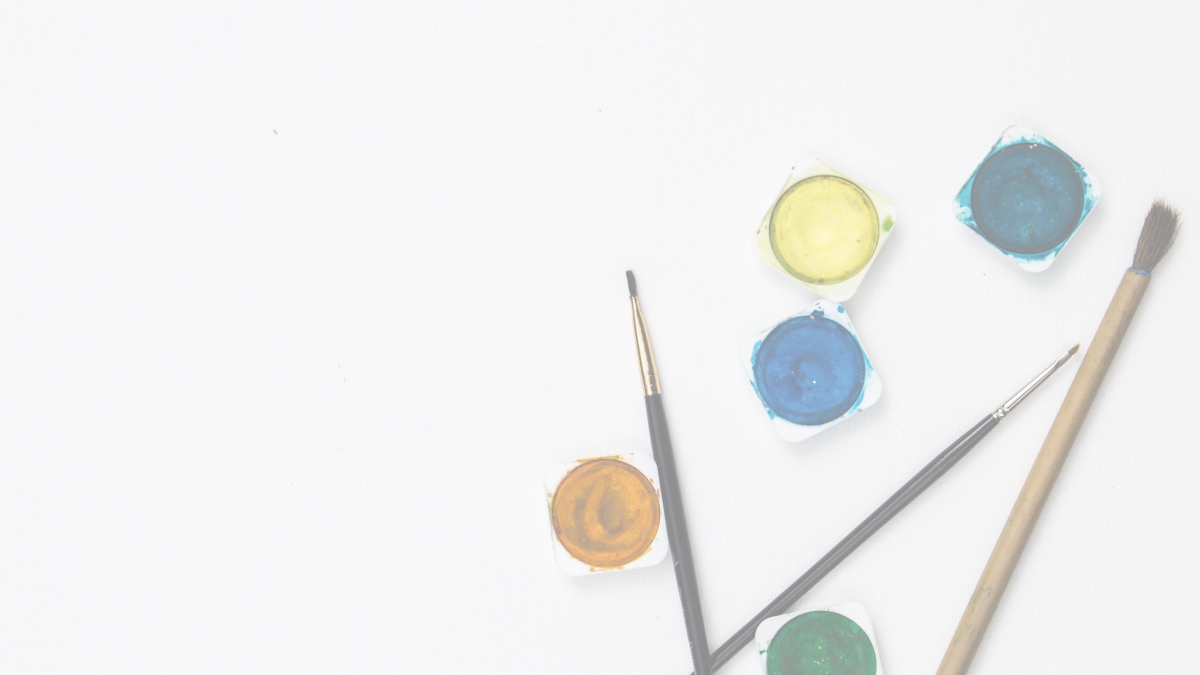 India’s fifth-largest paint company – Indigo Paints Ltd. – is looking to list on the Indian bourses as it opens its initial public offering on January 20. This will be among the first few IPOs of 2021. In the previous year 2020, as many as 15 companies made stock market debuts.

Exiting investors will make a killing in this initial public offering. Sequoia Capital through its two funds will make gains in the range of 13 to 20 times its investment amount. Does it make sense for retail investors to buy?

Short Answer: At such aggressive valuations, a lot of things need to fall in place, especially whem competing against one of the most efficient companies in India – Asian Paints. While the near-term high growth rate can be sustained, we remain skeptical of Indigo sustaining a similar growth rate in the long run. We would pass on this IPO.

The company is looking to raise close to ₹ 1,170 crore from the primary market via the fresh issue and offer for sale. The company is offering 78.4 lakh equity shares at a price band of ₹ 1,488 to ₹ 1,490.

The company will be using the majority of fresh issue proceeds towards capacity expansion. It is setting up an additional unit, adjacent to the existing facility in Tamil Nadu, to manufacture water-based paints. The new unit will have a production capacity of 50,000 KLPA (kilolitres per annum) and it is expected to be operational during FY23. The total cost for this expansion is expected to be around ₹ 186 crore – ₹ 150 crore through IPO proceeds and ₹ 36 crore through internal accruals.

Along with this, in order to increase its distribution and sales, Indigo Paints is also looking to purchase around 3,700 tinting machines and 1,200 gyroshakers. The company will be distributing these machines to distributors over FY22 to FY24.

Its promoter will be diluting its stake to 54% in the initial public offering from 60%. Post listing the company will be valued at close to ₹ 7,088 crore. 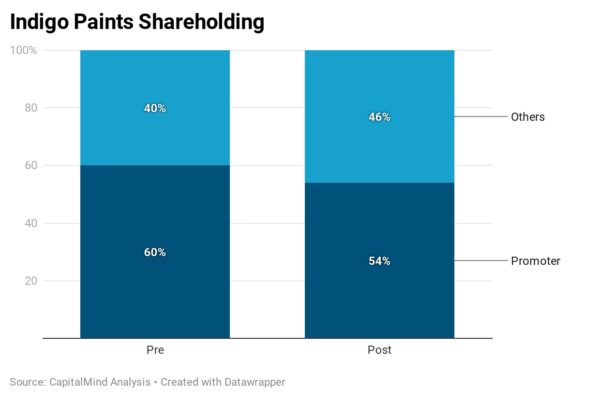 Incorporated in 2000, Indigo Paints is the fifth largest decorative paints company in India. The company is engaged in the manufacturing and marketing of a complete range of decorative paints including emulsions, enamels, wood coatings, distempers, primers, putties, and cement paints. 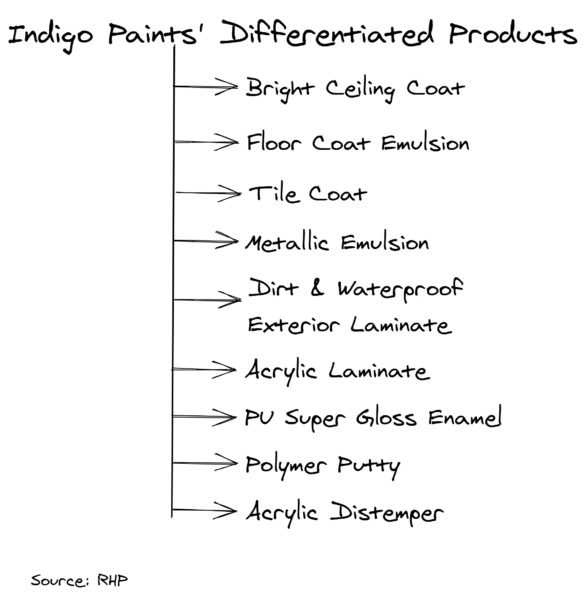 The company initially taps into tier 3, tier 4 cities, and rural areas, while entering a new state, where brand penetration is easier, and dealers have a greater ability to influence customer purchase decisions. Subsequently, it leverages this network to engage with dealers in tier 1 and tier 2 cities and metros as well.

Currently, the company owns and operates three manufacturing facilities located in Rajasthan, Kerala, and Tamil Nadu with an aggregate estimated installed production capacity of 1,01,903 KLPA for liquid paints and 93,118 MTPA (metric tonnes per annum) for putties and powder paints.

A tinting machine is one of the most important aspects of a paint company. Tinting machines helps in creating various shades of paint without the cost of higher inventory. They are unique to each paint manufacturer due to design specifications and customised software applications. It acts as a huge entry barrier due to the paucity of space with dealers. Dealers tend to install only 1-2 tinting machines of only recognized players posing stiff resistance to smaller/lesser-known brands. To overcome this challenge, Indigo focused on installing their tinting machine specifically in tier 2/3/4 cities and rural areas where the penetration of tinting machines was low and hence posed lower resistance.

So far, the company has installed 4,603 machines across 11,000 active dealers. And it has plans to install 3,700 more of it over the next three financial years.

Paints is primarily a pull product, thus advertising plays an important aspect. Higher advertising leads to higher brand recall among customers. Indigo Paints has been extremely aggressive in terms of its marketing and brand building exercise since FY15. Post funds raised from Sequoia Capital in FY15, Indigo increased its spending on an advertisement from an average of 8% as a percentage of sales during the previous decade to 14% during FY15-20.

The company has so far not announced any dividends as it turned profitable only three years back.

Over FY15-20, the company’s revenue growth was over 47%, while its gross profit also grew at a similar rate. On the operating and bottom-line front, the company turned profitable in FY18. The company’s gross margins have averaged around 46.5%, while its EBITDA margins off-late have increased due to economies of scale.

Apart from raw material cost, one of the largest cost items in its profit and loss account is advertisement expenditure. Advertising cost as a percentage of revenue has kept on increasing for the company. However, going forward, in absolute terms number would continue to increase, but advertising expense as a percentage of revenue should taper off.

The company’s working capital cycle has improved over the period, while its return ratios are fairly attractive.

India’s paint industry is dominated by the top four players, which account for two-thirds of the market share. All of these four players are listed on the Indian bourses and are a competitor to Indigo Paints. 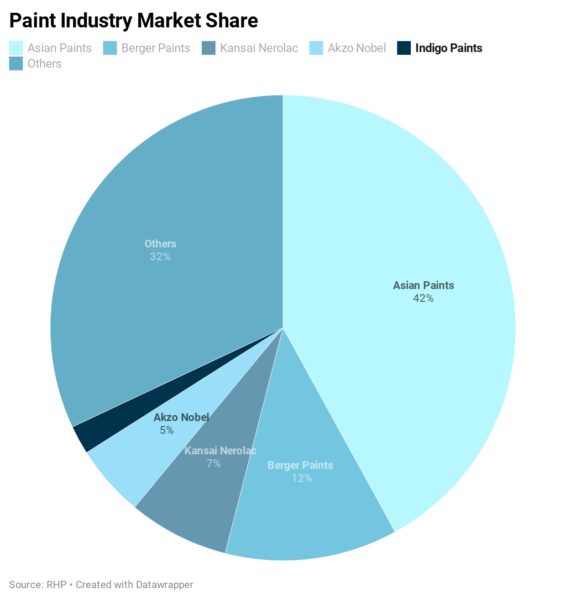 Over the years, Indigo Paints has grown at a much faster rate compared to its older peers on the back of its niche product line, brand awareness, and focus on smaller cities and rural areas. Indigo’s gross margins are the highest in the industry as its manufacturing facilities are strategically located in close proximity to raw material sources that reduce inward freight costs, thereby lowering the overall cost of raw materials.

However, its EBITDA margin is lower compared to peers due to higher ad spends. Indigo’s ad spends as a percentage of revenue is the highest in the industry. But on an absolute basis, it is way lower than the market leader. Tinting machines play a very important role for paint companies, as it a prerequisite for dealers that sell emulsion paints. So far, the company has been able to deploy on average 1,223 tinting machines every year for the past three years. However, the total number of machines deployed is just 10% of the largest player. Also, the tinting machine to dealer ratio is just 38% Vs 66% of larger peers.

This common size profit and loss account of all the four listed paint companies and Indigo Paints shows us that due to the lower number of plants an depots, the companies outward freight costs are higher and as the company is still in a growth phase, its advertising cost remains high. 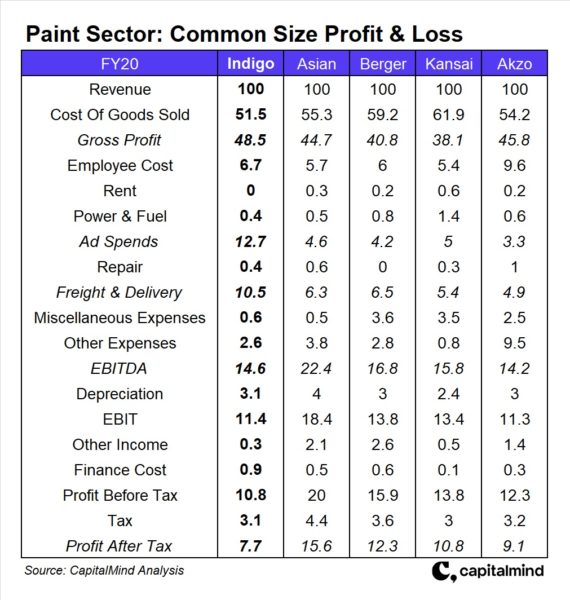 Indigo’s earnings per share for the financial year 2020, post-dilution, comes to ₹ 10. At the upper end of the price band, the price-to-earnings ratio stands at 148.3 times Vs industry average of 80.6 times.

History says overall IPOs tend to be a mixed bag. Promoters along with private investors understandably choose to take their companies public at times when equity markets are enthusiastic, to get top dollar for parting with their stake. The retail investors’ information disadvantage is magnified in the case of private companies in the process of going public. So, our default attitude is to be cautious about all IPOs. However, given the recent trend in IPOs and the current market momentum, it would be fair to say that even this IPO could help investors make a quick profit in the form of “listing gains”.

Coming to Indigo Paints, around 10-15% of the market, which currently is fragmented among several smaller and localised firms, can be easily captured by an aggressive brand like Indigo through brand awareness campaigns, below the line activities for dealers and painters to consistently highlight product qualities and by giving them volume and price incentives.

Considering factors like the expansion program, increasing brand awareness, and huge opportunities from the affordable housing segment, the growth prospects look to be better than peers. Indigo Paints has been successful in driving profitable growth while creating brand pull in a highly competitive market. The company can continue to display similar performance in future. However, the IPO appears to be priced aggressively given the inherent risks. Larger decorative players are increasingly focusing on tier 3 & below markets for growth, which could adversely impact the growth & margin of the company.

At such aggressive valuations, a lot of things need to fall in place. Remember, Indigo is competing against one of the most efficient company in India. While the near-term high growth rate can be sustained, we remain skeptical of Indigo sustaining a similar growth rate in the long run. We would pass on this IPO.

Further reading: A deep dive into the Indian Paints industry and why Asian Paints dominates.