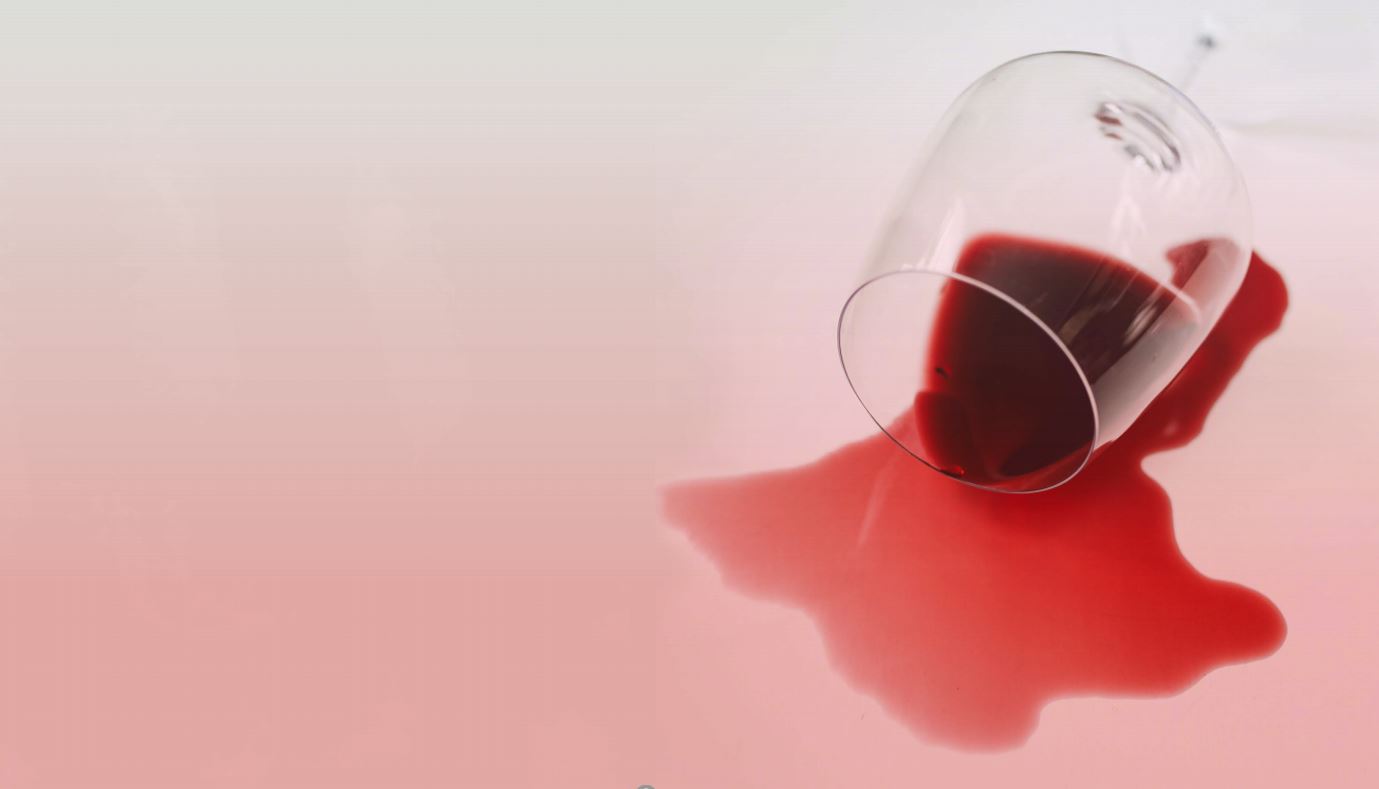 A fable to start with

There was this powerful king who asks all his wise men to create a ring that will make him happy when he is sad. After a lot of deliberation the wise men hand him a simple ring with the words “This too shall pass” etched on it, which does have the desired effect to make him happy when he is sad. It also, however, became a curse for whenever he is happy.

As investors and market participants, we are a bit like that king, doomed to be perpetually restless.

When the market goes down, we wonder as to when would it go up, and when it does go up, we worry if it would crash soon.

Given the way the markets have been making new all time highs, we hear people around us asking – Is a market crash looming? Is this the top? What are the odds that the market would crash anytime soon?

Even on our Premium Slack group, people looking for a dip to buy have almost given up. There are quite a few sitting on the sidelines since March’20.

With desperation at it’s extreme, I thought its only fair to look at what the numbers tell us, and as they say, to a man with a hammer, everything looks like a nail, so here’s what I found by hammering past data.

So how do you know if this is the top?

If you need to find the odds of the market top, you need to first define the top, in this case an All time high (ATH) is the top. ATH is the highest value that the index has touched ever. So, the ATH today would be different from what it was 5 years ago, assuming the market has been going up during this 5 year period. In fact, these days every other day we get a new ATH as the market has been going up practically every day.

Next, you need to find a reference price. This reference price is needed to test the following hypothesis – Yes the market made a new ATH, but from where did the price move start?

This ‘where did the price move start’ question requires us to use some sort of reference price, it could be a fixed average or a rolling/moving average, in this post I use the 200 day moving average.

To understand this phenomena visually, here’s NIFTY’s end of day chart since 1995. Along with it is the 200 day moving average.

If you notice once the price keeps coming back to the 200 DMA and irrespective of which side of the DMA it got extended. For instance we were down 35 percent from the 200DMA in March’20 and as of today we are up 24 percent from 200DMA. This getting back to the ‘mean’ is known as reversion to the mean (RTM).

You can obviously choose a different lookback, a fixed average value instead of a moving average, it does not really matter, you would still see this phenomena.

In his 2002 Keynote address at the Morningstar Investment Forum, (A must must read by itself) John C Bogle called RTM (Reversion to Mean) the pervasive law of gravity that prevails in the financial markets, something that never stops, while its drumbeat is hardly regular, it never fails.

In the context of financial time series data, RTM is the tendency of the price to move to its mean over time. Typically, price moves away from its mean and then goes back to the mean, while the mean itself may move up or down.

Here’s another chart which shows ‘% from 200 DMA’, on both up and the down side, you would notice that the moves are largely bounded around 20% to 30% most of the time, before it goes back to the mean. We are currently at 23%, but then who knows.

Tell me (without mincing words) – is there a market crash due?

We’ve defined what an ATH is, we’ve also decided on a reference value ie the 200 DMA, now we need to define what we mean by a ‘crash’. For now, we’ll define a crash as an EOD price-close below the 200 DMA.

With all the variables defined now lets look at the odds.

We use NIFTY EOD data since its inception i.e. Jan’94. From that data we draw a 200 day moving average, and filter out trends which have lasted greater than 90 days. A trend here means, EOD price being above the 200 DMA value.

This is 1 SD, so what that means is (assuming the data follows a normal distribution) – 68% of times the up trend would continue at max for 168 days. Now remember this claim works better if we have several, say upwards of 100 data points, which we don’t at the moment. In a sense we are taking a bit of liberty with data.

The table below shows us all the instances. 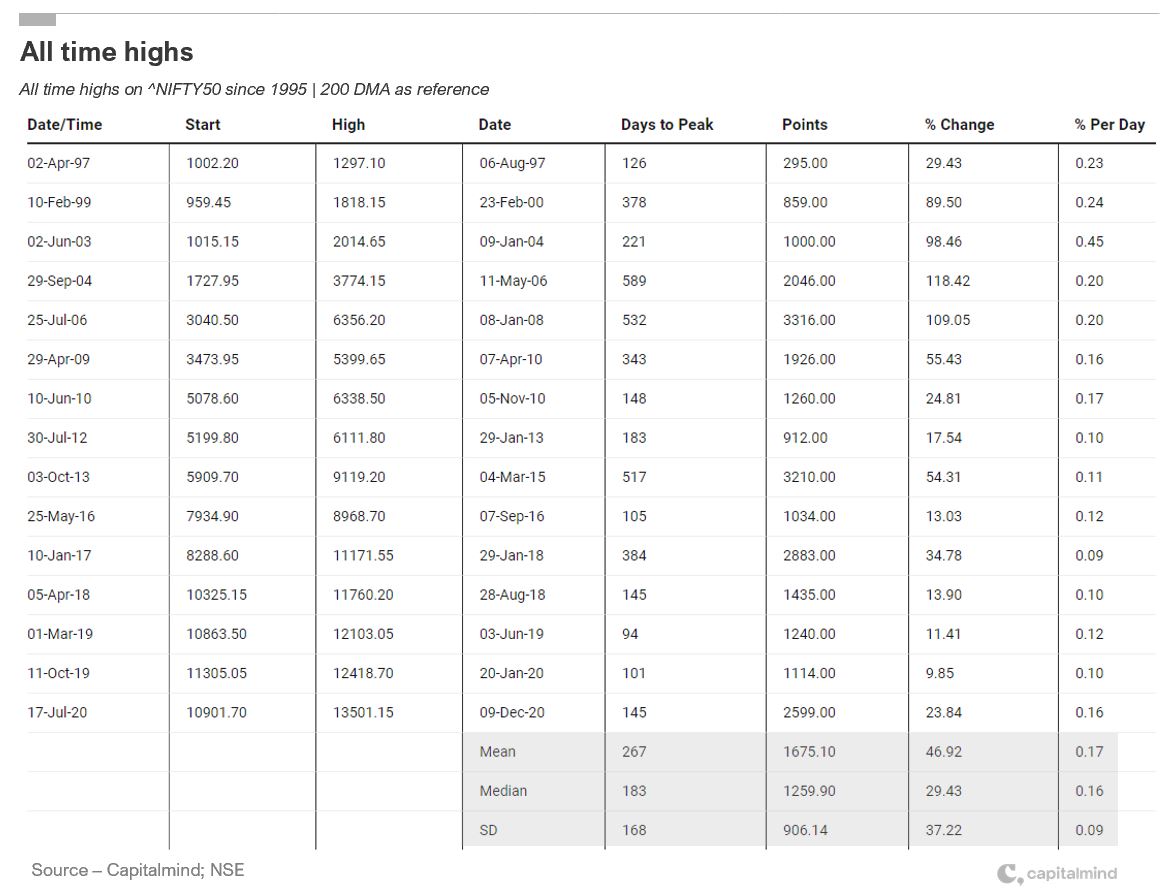 How long does it take typically for the price to get to its peak?

Once the price hits the peak, how long does it take for it to revert to the mean? 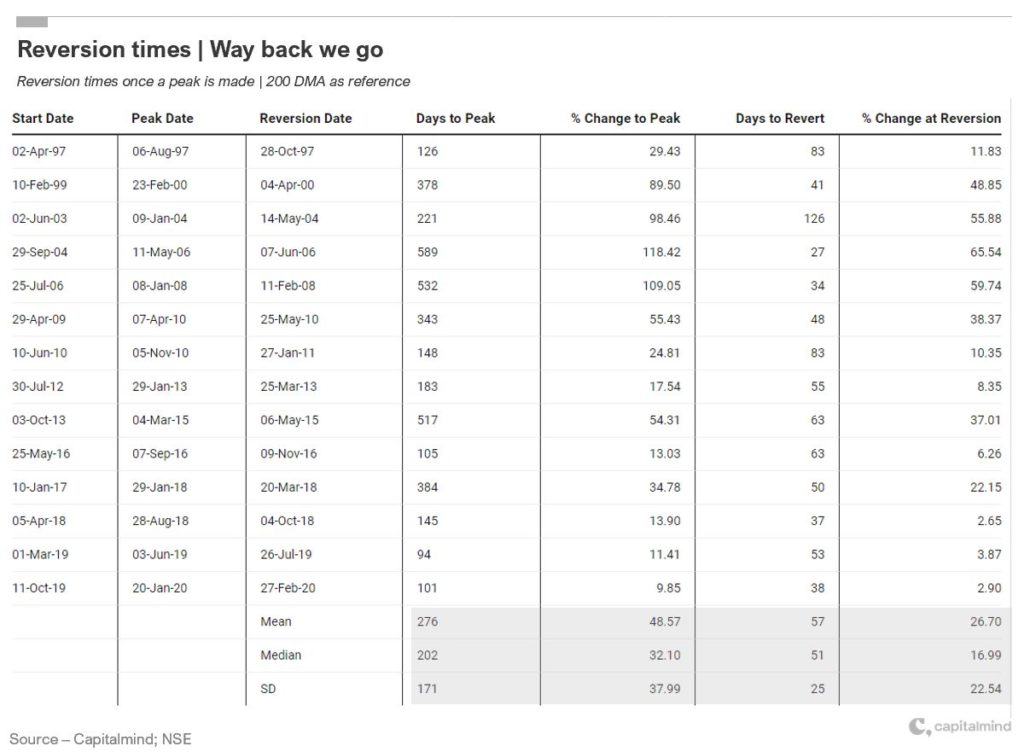 A look at the table tells us that on an average it takes about 50 odd days, Standard deviation being 25 days.

Should I exit my holdings?

To answer this question, we’ll look at the distribution of returns. Since we’ve already done 145 days in this up-trend, lets go back to all the uptrends which lasted for greater than 145 days to see the returns by 145 days vs. returns beyond 145 days.

We do foresee a reversion to the 200 DMA which is currently at 10780 and is a good 20% from the current levels, from a time line stand point we are still a couple of months from it.

With all this data, hope you got a sense of where we are located statistically i.e. in this up trend, and it helps you take some decisions, if you want, and may be redeem yourself from the curse of those wise men.

This article is for informational purposes. This is not a recommendation to buy or sell securities. For access to premium research, model portfolios, signals for our trend-following strategy and a vibrant member forum, you can subscribe to Capitalmind Premium here. Use code WEEKEND15 to get 15% off regular price. Valid till Sunday midnight.