Two companies listed on the Indian bourses within a one-month time frame last year have quintupled investors’ investments. One common theme between these two – tech-driven companies where growth is fueled by the adoption of the internet.

But ask anyone other than maybe registered buyers on the platform, they might well say, What is Indiamart? What does Affle do? Here’s a primer on the business model of Indiamart and Affle.

IndiaMart InterMesh – acts as an aggregator for suppliers and buyers in the wholesale ecosystem. 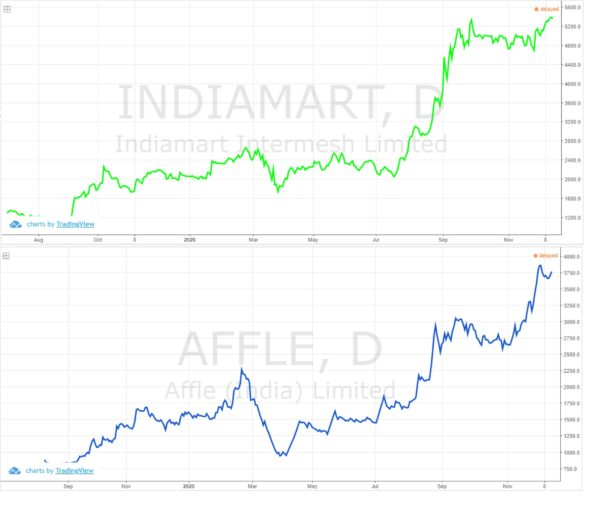 The listing of this mobile marketing company had seen a lot of market interest not only because it was the Indian unit of Microsoft-backed Affle Holding Pte. Ltd., but also due to the first of its kind listing in the Indian bourses.

The company was focused on mobile advertising which is a fast-growing area and it also had an international presence which de-risks its business from country-specific slowdown. The company derived a little more than 55% of its revenue from international markets like Southeast Asia, the Middle East, Africa, North America, Europe, Japan, Korea, and Australia.

Despite being in a space, which is dominated by digital giants such as Google and Facebook and has over 100 companies that offer such services, the company did report a strong financial performance.

On a standalone basis, the financial performance was strong with a revenue uplift in FY18 and FY19. However, in FY19, the company undertook corporate restructuring and also completed the acquisition of three companies – Vizury commerce business, Shoffr platform business, and RevX platform business. Post this, the consolidated financials was the relevant statement for Affle.

The company is engaged in delivering consumer acquisitions for B2C companies through relevant mobile advertising with a proprietary consumer intelligence platform. The platform aims to enhance return on marketing spend through contextual mobile ads and reducing digital ad frauds.

What Changed Since Listing

The financial performance improved a lot post listing and remained unscathed even during the pandemic. The revenue growth was on the back of increased relevance of mobile advertising, expansion into developed markets, and acquisitions. Since listing, the company acquired a majority stake in two companies and a minority stake in two other companies.

The revenue growth led to operating profit growth. However, the margins remained range-bound around 25% post listing. This is partially due to the weaker performance of acquiring businesses.

These acquisitions coupled with research and development costs led to a negative free cash flow in FY20. Free cash flow for FY21 is also expected to be negative. At the start of FY20, cash levels stood high due to IPO proceeds. However, during FY20, the company took debt from the parent company – Affle Holding – to fund one of its acquisitions. The loan was taken at a nominal interest rate of 2-3%.

Debt levels for FY21 are expected to remain elevated as the company will be making payments for other acquisitions. 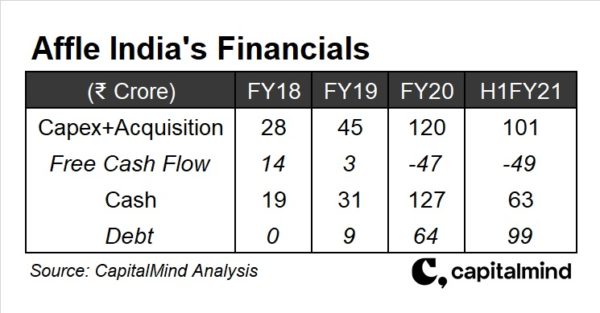 The recent results highlighted that more and more advertisers are preferring mobile advertisement channels given the behavioral shift of increased connected devices used in the post-pandemic world. The company has a set infrastructure and only needs to ramp-up its platform with more services and accuracy in the deliveries, which in turn will attract move advertisers and companies. This will lead to higher productivity which in turn will give the company benefits of operating leverage.

The company is in process of integrating the recently acquired companies and this is expected to complete in the current financial year. Completion of the same will improve the overall profitability.

The company in past has delivered growth and is rightly positioned for growth in the present. However, the key question is how much value would one assign to the company?

At current prices, the company is trading at 112 times its last 12-month earnings as compared to 39 times when the shares were offered during IPO. Its closest peer – TradeDesk – trades at double the valuations, but it also generates 14 times more revenue and 6 times more earnings per share for its shareholders compared to Affle.

The initial public offering of IndiaMart was a way for investors to own shares in the Indian version of Alibaba. Similar to Alibaba, here also the company presents a platform or an online B2B marketplace, connecting buyers and sellers.

It is India’s largest online B2B marketplace with approximately 60% market share. Its business model works on subscription from sellers or suppliers who opt for paying and not buyers. The company primarily relies on subscriptions purchased by sellers. The company also earns revenue through advertising on IndiaMart desktop and mobile optimised platforms and IndiaMart mobile app, payment facilitation service, and from the sale of RFQ (request for quotes) credits.

Given the nascent stage of online B2B e-commerce in India, this space provides huge room for growth in the years to come. Thus, despite a not so profitable past and lack of comparable peer’s analysis, the company received a strong subscription demand.

Boosted by its increasing number of paying subscriptions, the company registered robust revenue. This coupled with stable cost aided the company to turn operationally profitable. On the cost side, a decline in employee, advertising, content development, and buyer engagement cost as a percentage of revenue led the company to profitability.

As the company sells nearly one-third of the subscription packs on a three-year basis, deferred revenue is a good indicator for near-term revenue.

The Financial Story Since Listing

The digitisation drive for micro, small, and medium enterprises in India aided revenue growth. This coupled with a highly variable cost structure and low to nil marketing spends gave IndiaMart the ability to protect operating profits even in times of weak revenue growth.

The business is in a negative working capital cycle owing to a large proportion of upfront collections. This has led to positive free cash flow & significant cash generation.

Q1FY21 was the only disappointing quarter for the company which could be attributable to Covid-19. Though the impact of the same was witnessed by MSMEs even in Q2, the company was able to increase the number of paying subscribers on its platform. The disappointment was only limited to the topline. On the bottom-line front, the company reported its highest-ever quarterly net profit due to cost savings.

The company managed to reduce its total cost by 32% due to lower rental, travelling, and employee costs. Moreover, the company expects half of these cost savings to sustain even when operations get back to normal. Employee costs were lower due to natural attrition and because certain staff welfare expenses were saved because of work from home.

In Q2, the company witnessed a growth in its paying suppliers by around 8,000. Around 80% of the clients were those who had churned due to the Covid-19 crisis, while the balance were new customer acquisitions.

Strong market share in a nascent market, high growth in digitisation among the MSMEs, and high operating leverage are expected to benefit the company. Shift to an online platform is an irreversible trend and will be the key driver of IndiaMart’s subscriber addition and growth.

However, there are few key concerns which appears to be overlooked. At issue price, IndiaMart shares were offered at 31 times EV/EBITDA, while now it is trading at 58 times. The valuations appear to price-in flawless business execution and growth while ignoring some inherent risks.

In Q2FY21, company’s EBITDA Margins expanded to 50% – highest ever. However, the same is expected to moderate as operations returns to normalcy. This is because only half of the cost savings witnessed in Q2 would be sustainable.

A couple of months back, Just Dial – a leading local search engine – announced the launch of its B2B e-commerce portal. This portal which would be known as JD Mart will be a direct competitor of IndiaMart. Churn among the large subscribers is less likely but increasing churn at the lower end could also impact revenue growth.

Disclosure: Author and Company have interests in the stocks mentioned in this article.