All of us at Capitalmind wish you a Very Happy and Joyous Diwali 2020. Hope the next year will be filled with joy and wealth, even if it’s not in that order!

We don’t like predictions. But every year, we make an exception for Diwali where we predict our posterior off. It’s like an annual ritual where you get a license and the only thing that happens the next year is to find out how good (or bad) the predictions were!

Last year, we predicted in our long post about various things. What we did not foreses is that Covid-19 would have come and changed life as we knew it, and yet, a year later, the markets would be higher. Even the markets worked from home. But here’s what we said:

We’ll see an NBFC go down. This could involve merging it with others. Or that it enforces haircuts on people who have given it money. But that’s likely to happen in the next 12 months.

This feels like it’s happened. But it hasn’t, really. Many NBFCs came to the edge of default and were rescued by the massive intervention of RBI, the TLTRO offered to banks, and the general glut of liquidity.

But there was a big casualty. The Franklin Templeton debt fund destruction. Franklin, you might say, was an NBFC or behaved like one. It took money from investors and gave it to, let’s just say, not the best of firms. The model collapsed after Covid, when it appeared like many of these businesses would find it difficult to continue, and investors asked for their money back. Given that in a mutual fund, it’s the investor that is the actual lender (not the mutual fund), the “hit” was taken in the form of a locked in fund that currently is going through a court case. We’ll probably take 5 marks for this out of 10.

Revival in the Indian economy will be slow, but the next year will belong to mid- and small-caps, though there will be extreme volatility. The problem is that the revival will get beaten up and there could be multiple cycles of stocks falling and recovering.

The year belonged to either everybody or nobody. The Mid-Caps rebounded just as well as the Small-caps and as the Nifty. 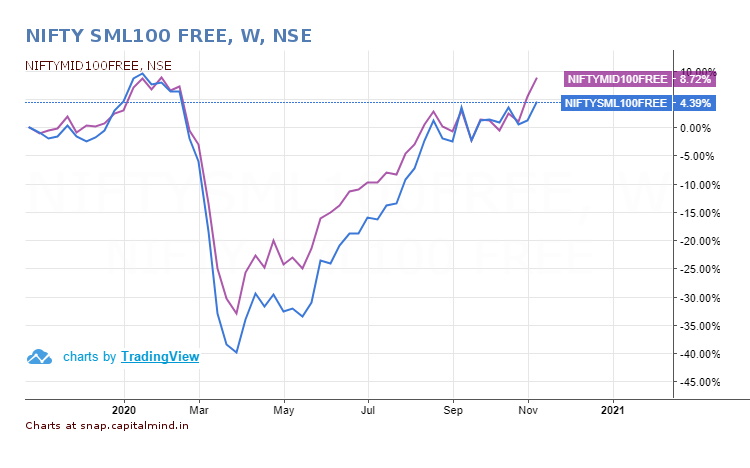 There were however sub-cycles of falls and recoveries throughout, and there definitely was extreme volatility. The revival did happen till Jan – as you can see above, and then Covid-19 took it all the way down. The economic recovery is definitely slow. So some marks for that, of course. Let’s just say another 5/10

Interest rates in India will fall further. Below 4.5%.

There will be at least one big account such as Essar Steel that is fully resolved through the bankruptcy court. Rules will be changed to remove discrepancies.

This has happened in CG Power. The bankruptcy court was suspended for new cases post March, but the older cases continue to get resolved. The DHFL resolution is nearly done, with about two more weeks to handle this. So yes, this one’s a winner too. 10/10.

Stocks in the auto sector will rebound. They may not be valued as richly as before though. This is a good point to make a bet on a few of them.

Many of the quality names that have now reached 60+ P/E without much growth will see markets flatten them out. However, a deep crash will only happen if the stock markets crash.

This is written in such a way that it was most likely true. Markets have flattened a few of the expensive names (Page Industries, Pidilite). But a few have risen strongly – like Asian Paints and Jubilant Foods. In fact the low p/e stocks like ITC have crashed a lot more.

But indeed, the deep crash did happen, and took those stocks down with it. So again, 5/10.

I’m not betting on a big crash, but I believe we will see at least one -20% move down in the next 12 months.

The US and China will pretend to make up, and then break up, at least three times in the next 12 months.

There was some but it mostly was break up. Trump, being Trump, did mention how he had a “good relationship” with China’s Xi Jinping (like here) while at the same time banning Huawei, forcing Tiktok to sell its US assets, and so on. We’ll take 8/10 on this.

Brexit will happen, and strangely, it won’t be as bad as it was thought about earlier.

Technically, Brexit is happening. The BBC says the withdrawal agreement was signed Jan 31. This transition, though will go on till December 2020, and trade deals with the EU and other countries are yet to happen. It still doesn’t look bad, but honestly it will only start to reveal itself after next January. So yes, let’s just take a 5/10.

The Index Combo: If you were looking for stocks to buy:

This combination has done extremely well. It has beaten the Nifty and Next 50, and likely most mutual funds. (We did a quick check: Ranking all large cap, large+midcap and multicap funds, only two funds have done better – PPFAS Long Term Equity and PGIM India Diversified Equity). So in this case, we’re going to claim 10/10.

As you can see, we’ve done pretty well with 73% accuracy, because we can twist statistics to wherever we like.

Predictions for the coming year

A few things we think will happen:

The problem with predictions is that you have to remember what they are and wonder what you were thinking the last time you said them. So even once a year, this is as painful as it gets. But we got lucky this year!

At Capitalmind, we continue to grow!

We have an exciting new site coming up, with a new dashboard. All users who sign up now will see the new portfolios on their dashboards. Wealth as a PMS too has more information and website changes coming our way. It’s going to be a fun year!

We have a DIWALI discount code!

Yes, you can subscribe to Capitalmind Premium for a discount now. Go to https://www.capitalmind.in/pricing/ and use code WELCOMEABOARD for a 30% discount. (Valid till 24th November!) 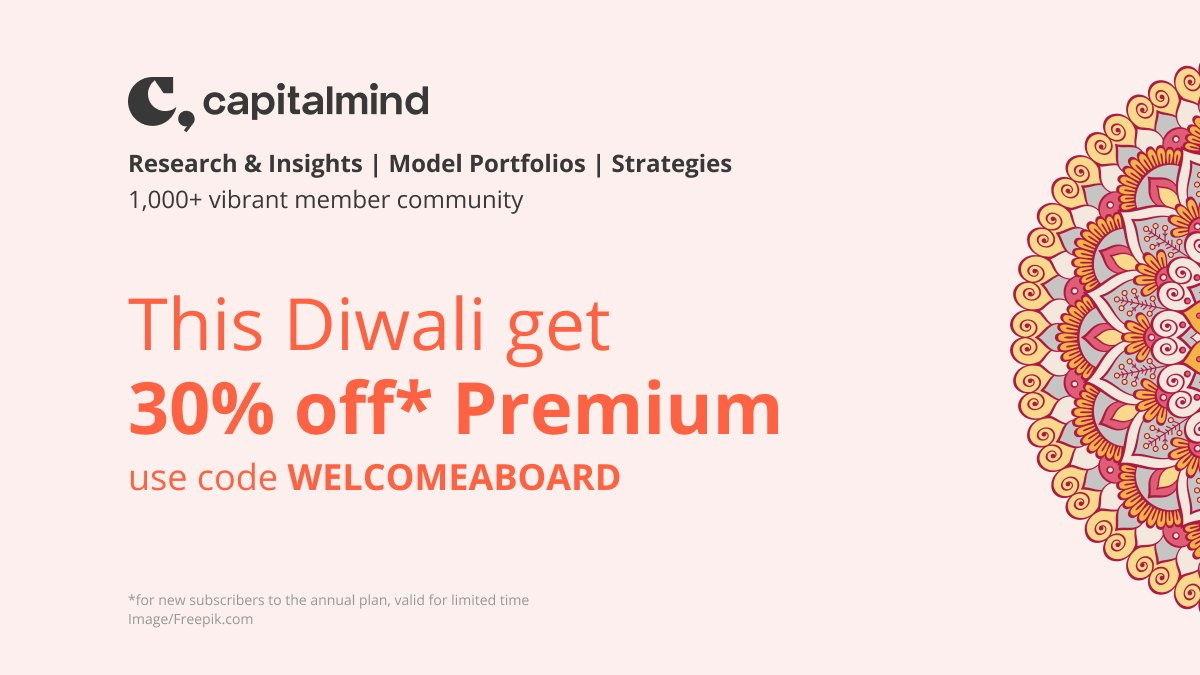