We’ll take the hit, says the government, on the “interest on interest” waiver. After providing a moratorium on payments of loans, it soon became evident that this is no real favour – because interest would have to be paid on the money, just to be paid later. (Read: 3 months of no EMIs, but why you should pay anyways)

The moratorium had been extended to 6 months in length, and what happens is:

A lot of people thought “moratorium” means “we don’t need to pay any interest”, and filed court cases to clarify. And the Supreme Court decided to hear the case. As part of this case, the government has now decided to provide a little bit of relief, but not too much.

The sheer size of it. If you waive all interest, the government claims that the amount lost would be a massive 600,000 crores.

If the Government were to consider waiving interset on all the loan and advances to all classes and categories of borrowers corresponding to the six-motnh period for which the moratorium (i.e. deferment of payment of instalment) was made available under the relevant RBI circulars, the etimated amount is more than Rs. 6 lakh crores.

This is from the affidavit submitted.

The total amount of loans in the system is roughly 105 lakh crores. At an average rate of 10% you might see a 6 month period of interest adding up to that number. (including compound interest)

Specifically, they say, for SBI, India’s largest bank: “a waiver of six months’ interest would completely wipe out over half of the bank’s net worth”.

Plus, of course you can’t deny depositors their interest. A bank then is in a position that it has to pay depositors but not get interest from its loans, which is a dead-end situation.

The Government has thus proposed that :

But this will only apply to loans below Rs. 2 crore, and then, only on the following categories:

Wait, How Much Relief Does This Give?

Let’s say you have a Rs. 50 lakh loan outstanding, at 10% interest. Here’s a quick look at how interest on interest adds up. This is if you don’t pay back any principal.

The government will pay Rs. 5,267 to your bank, so you get that much benefit.

This doesn’t sound like much, and it really is not. The amount is roughly 0.1% of the outstanding loan.

But that’s for an interest rate of 10%. What about for higher rates?

How much will the government have to pay?

The total loans outstanding by banks to various sectors highlighted above are about 36 lakh crores. 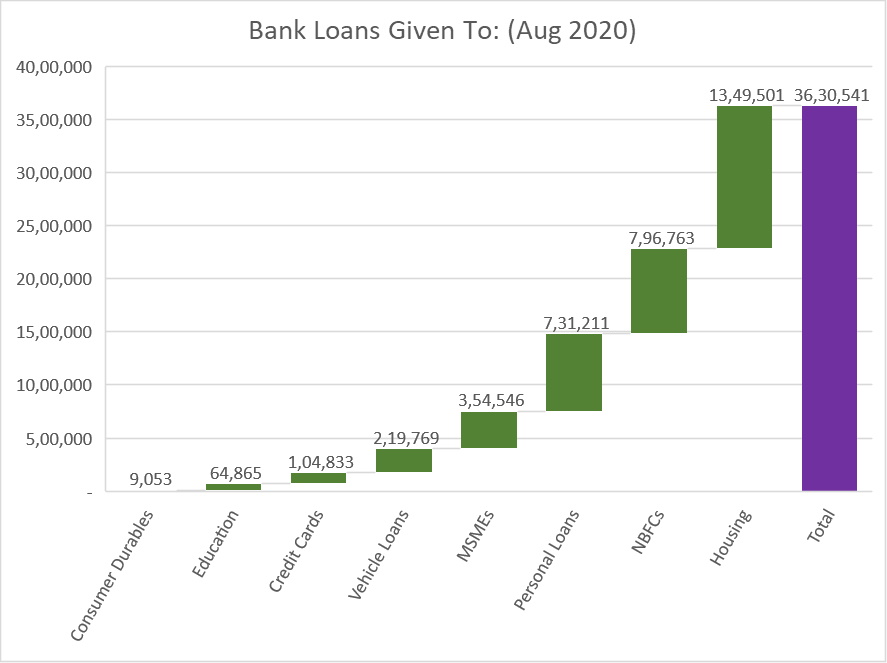 First we have to assume that ALL of these are less than Rs. 2 cr. each. But that may not be true. Many such loans are more than 2 cr. such as certain MSME loans.

Third, the credit card “outstanding” includes customers who don’t pay any interest i.e. who will pay back before their due dates. Such customers won’t qualify for a moratorium, so the actual numbers that qualify will be lower.

Given the above, the qualifying amount of loans for the waiver is likely to be Rs. 30 lakh crores.

That’s not a huge deal by any standard, and the government can bear this quite easily.

In all, this is good headlines, but the value for you is very little if you’re a home loan customer. The hit on the government is tiny.

What happens to everyone else? Well, they renegotiate with banks. RBI has allowed them to do so without carrying an “NPA” tag on their back.

The court takes the final decision, as is unfortunately the case with a lot of things that should have been decided in parliament or by the executive. Let’s wait for next week when the final decision comes out.