This is a stock of a stock that has benefited by the rising usage of LPG in India.

Over the last 10 years, consumption of liquified petroleum gas – used for cooking at home in India has increased steadily, even as domestic production has failed to catch up. The result: A Rising Dependence On LPG Imports

India, the world’s second-largest LPG consumer, imported 56% of its LPG requirements in the last financial year. This is largely on the back of the government’s push to provide clean cooking fuel to every household. LPG has been replacing traditional cooking fuels in rural kitchens such as firewood and cow dung which not only contribute to environmental degradation but also have serious health implications on users.

The Indian government has been pushing for 100% LPG penetration and by the end of FY20, it has achieved 97%.

Despite achieving 97% LPG penetration, average 16 kg. cylinder refill rates stand at 3 per annum for weaker sections vs 7 all-India. This can be attributed to weak distribution which makes supplies unreliable and costly. This indicates that there is further room for domestic LPG consumption growth. Along with this, increasing traction from non-domestic users could spur LPG consumption in India.

Thus, strong import-led growth in LPG consumption in India will be the key driver for Aegis Logistics Ltd.

Through a joint venture with Itochu in Singapore, Aegis is involved in the sourcing of LPG for India. In FY20, Aegis had a 12% market share in total LPG imported into India. It has earned an average gross margin of $2.5-4 per metric tonne on the volume of LPG sourced over FY16-20. Its clientele includes India’s major oil refineries like Reliance Industries Ltd., IOCL, BPCL, and HPCL.

Historically the company has sourced 8-10% of Indian LPG import requirements. This increased to 13% in FY20 as it had won two tenders from IOCL. The sourcing volumes for FY21 is expected to be less as the company did not win the IOCL contract, but it is bidding aggressively for BPCL and HPCL tenders.

The company provides storage and handling services for imported LPG at the ports. It has LPG storage facilities at four key ports in India – Mumbai, Pipavav, Haldia, and Kandla. It earns revenue through storage fees and handling services. Aegis handled three million metric tonnes of LPG in FY20.

Remember, Aegis is paid for throughput – not just for storage. What they have in storage is much lower in capacity, but their income hinges on how well they turn it around.

Of the four terminals, the Kandla terminal is currently under construction and is expected to be operational by the end of this financial year. Also, the company is expanding its capacity in the Pipavav terminal.

Aegis is involved in the distribution of gas in the form of autogas and cylinders for domestic, commercial, and industrial use through its own distribution network. It has 118 Autogas stations in eight states, 168 LPG distributors across 55 cities in nine states. Typically, the distribution business is a high margin segment.

The growth in Autogas volumes has been muted possibly due to the wider adoption of CNG. However, over FY16-20, industrial and commercial sales volume has jumped nearly five times.

It offers storage facilities on long-term contracts, i.e., one-year duration and on a spot basis for traders. Depending on spot volumes, capacity utilisation at terminals can be more than 100% as well.

Aegis’ legacy terminals at Mumbai, Kochi, and Haldia have all matured with regular business from established clients running at a capacity utilisation of 80-120%. However, the utilisation levels at other terminals, except Mangalore, is low as they are relatively newer terminals.

The liquid business has been acting as a cash generator and future growth will be driven on the back of expansion and maturity of newer terminals. The drop in return on capital employed was on account of the addition of new capacities and normally, it takes about 3-4 years after commissioning of new capacities to bring in optimum business.

Over the years, Aegis has seen steady growth in its topline. However, this was on the back of higher volumes seen in its low margin gas businesses. Though this led to a higher operational number, the margins were impacted.

However, from FY19 margins improved, as its newer capacities stabilised and revenue from higher-margin segments – liquid and gas distribution – started to increase. In FY20, Aegis announced a surprisingly large ESOP plan. It was offering 1.7 crore shares, i.e., dilution of 5% over 3 years, to its senior management other than the promoters.

Aegis had around 400 permanent employees at the end of FY19. Assuming that the senior management comprises 10% of the permanent workforce, the plan is likely to result in an average payoff of ₹ 3 crore over three years per person.

Aegis’ total debt has remained largely sustainable. Its total debt to equity is negligible. Also, the company is funding most of the expansion through internal accruals. 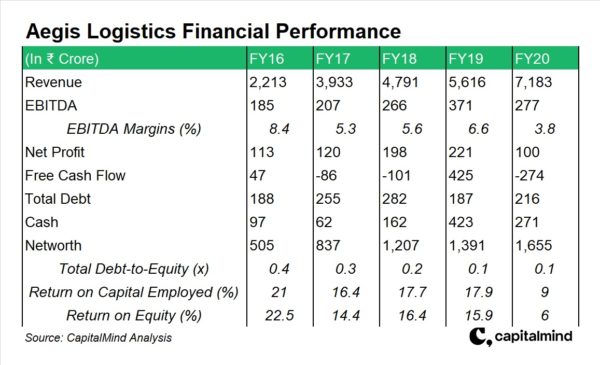 In Q1FY21 – which saw the major impact of Covid-19 – the company reported a 68% drop in its revenue. This was largely on account of lower LPG prices, hit on distribution business, and lower gas sourcing volumes. However, the impact on EBITDA excluding the ESOP expense remained low due to lower raw material and strong cost controls. Lower interest cost and tax expense aided net profit growth.

Aegis Logistics’ work for its capacity expansion across various locations is going and is expected to end by FY21. This capacity addition led by expansion programs will drive volume as well as profitability growth in the medium to long term. Moreover, the company continues to look for opportunities to lease or acquire land at major and minor ports in India in line with its vision of building a series of terminals around the coastline in India. The low debt on its book could help the company achieve this vision.

In Kandla, the company is setting up a new LPG terminal. The project is on the grids of the two pipeline projects which would aid the offtake once commissioned. Along with this HPCL’s Uran–Chakan pipeline was commissioned in June which is expected to drive volumes in Mumbai.

Aegis has undertaken the construction of a railway gantry project at its Pipavav LPG terminal as a strategic move to increase throughput. This railway connectivity would help in securing a big increase in volumes in Pipavav for the future, because the cost of transporting LPG by rail is significantly cheaper than road and that it would benefit its customers in terms of the landed cost of LPG at the bottling plants.

The Eastern region LPG penetration is weaker at present than the rest of India. Haldia is a gateway port for LPG in the east and with a new LPG bottling plant unit as well as the development of LPG pipelines in the region, volumes are expected to grow.

Also, unlike LPG, CNG cannot be trucked. For natural gas to be transported inland even from LNG regasification terminals, investments in gas pipeline infrastructure are needed. Expansion of gas pipeline infra has been going on, but progress has been slow, and constraints are expected to remain. Further, utilisation levels of many existing gas pipelines are low, discouraging large future investments.

Without pipeline infra, natural gas substitution for LPG in cooking and in autogas is very difficult.

Gujarat has attained close to complete CGD penetration and has gas pipeline infrastructure ready. Yet the adoption of natural gas has been slower and has not made a large dent in LPG consumption/growth in the region.

Thus, mere coverage expansion of CGD may not be enough to displace LPG. Gujarat, with near-complete CGD penetration, has shown significant LPG volume growth and penetration.

It has 118 Autogas stations currently and targets to reach 200 stations in the next five years.

Aegis has also introduced smaller cylinders packs to target the retail distribution segment. At present, the contribution is small with a presence across 1,500 retail outlets in 20 cities. However, management is optimistic about the prospects and expects to ramp up distribution to 11,500 retailers in urban areas across 20 states by FY25.

Along with this large volatility in forex rates in a short period of time can cause losses for the company in the sourcing business.

On the micro side, NGT has imposed a penalty of ₹ 142.2 crore over alleged air pollution in some villages of Ambapada and Mahul in August 2020. The company has planned to go before the Supreme Court against the NGT order. It seems to be a long battle and could work as an overhang on the share prices as any adverse development in this regard would be a big hit.

After adjusting for ESOP expenses, based on FY20 earnings, Aegis is trading at 21.3 times earnings. Given the expectation of strong import-led growth in LPG consumption in India, the valuations are attractive, and the ESOP expenses are non-cash, so the cash generation will remain strong. (Already, the company generates much more cash than it’s net profit, allowing capex to be done through accruals). Along with this, the capex completion in this financial year would lead to higher growth in the coming years for Aegis Logistics.

We had owned the stock between 2015 to 2017 when it made a 100% move in our long term portfolio. (See exit post) But, the stock hasn’t done anything since then. Revenues have more than doubled, though, and they have expanded geographically.

With most of the capex funded through internal accruals and minimal debt on books, there is ample room for further expansion. In past, Aegis’ earnings rose with the commencement of LPG terminals and the stock price has moved up historically on new terminal visibility. We like the story but will wait for the expansions to come into play before we decide on any actual action.

This article is for information only and should not be considered as recommendation to buy or sell any stock. For access to our premium articles, model portfolios and member forum, subscribe to Capitalmind Premium.