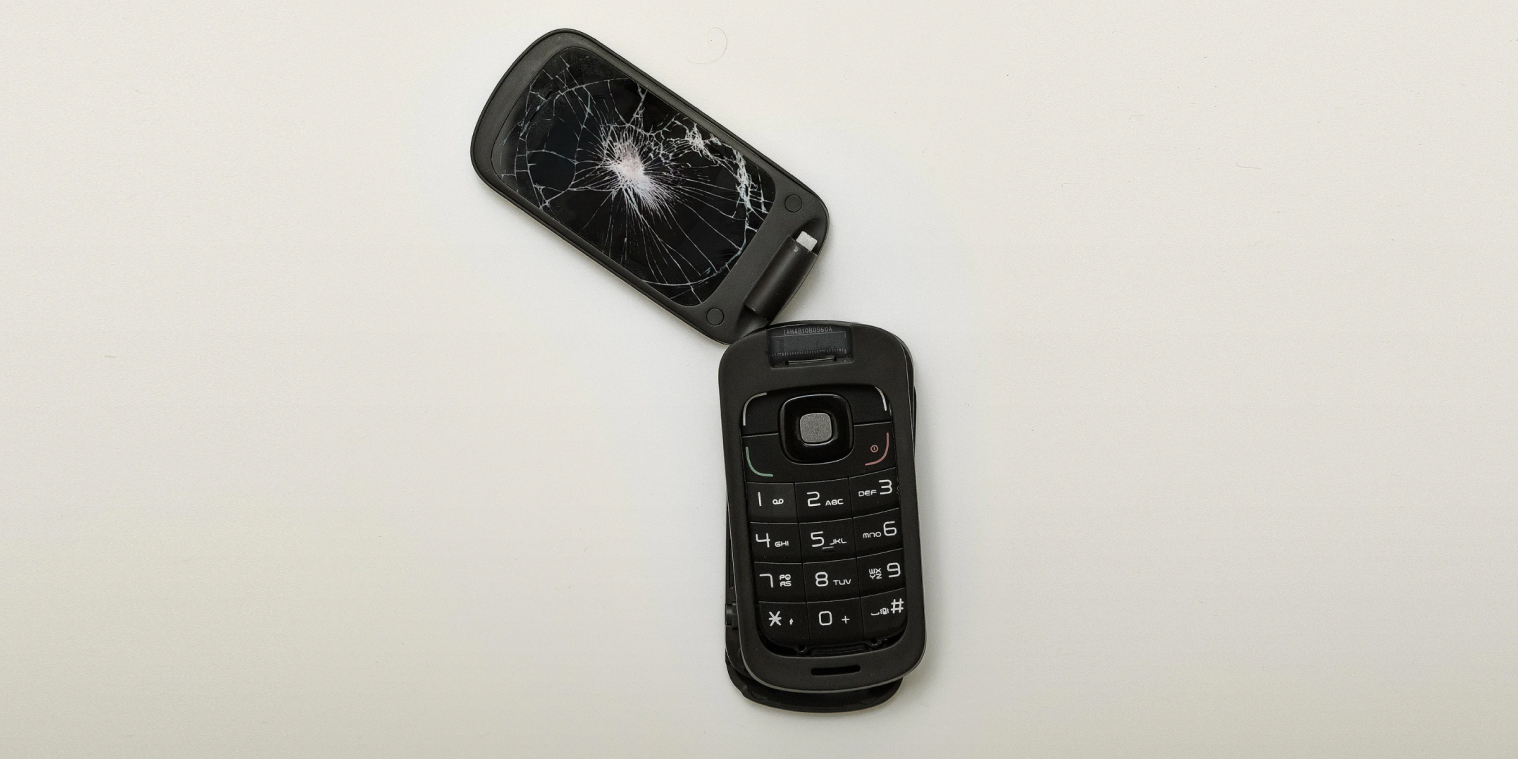 Why is Airtel Share price going down? Probably one of the most frequent investor questions today.

BHARTIARTL stock since the beginning of September

This is despite a major roadblock being cleared. The AGR dispute was finally settled in the Supreme Court for nearly 10 months since the final outcome.

Then why is it underperforming? We think there are five reasons weighing on the stock

With the AGR dispute settling, the company’s board enabling fundraising, new branding initiative, and a news report of inducting a new investor, there is a wide sense of optimism among investors that Vodafone Idea Ltd. would survive. Earlier, due to various reasons, the company’s ability to continue as a ‘going concern’ was under the clouds.

Going concern is a term that refers to the company’s ability to make enough money to stay afloat or avoid bankruptcy.

At the start of the month, the Mint newspaper reported that the U.S. based wireless carrier Verizon Communications and e-commerce major Amazon may invest more than $4 billion for a stake in Vodafone Plc and Kumar Mangalam Birla Controlled Vodafone Idea. Though the company, in a regulatory filing, denied any such investments being considered by its board, it did enable fundraising of ₹ 25,000 crore – nearly two-thirds of its market capitalisation.

Vodafone Idea will be good to go if this fundraising is successful. The fundraise will cover the cash shortfall for the next two years, provided there is a tariff hike and the subscriber base remain stable. 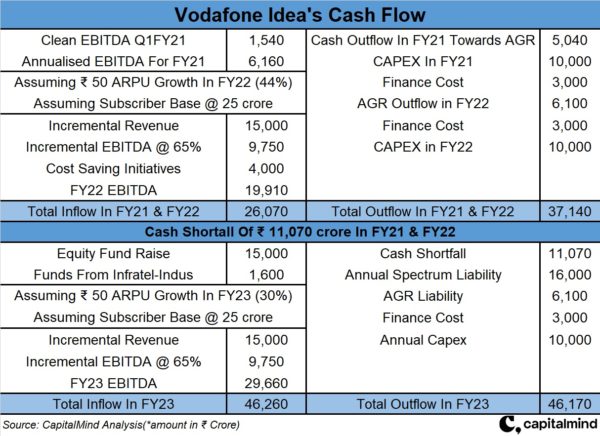 Currently, Vodafone Idea is generating an ARPU of ₹ 114 and for FY22 and FY23, the company would need an ARPU growth of ₹ 50 each. Also, the company’s subscriber base is around 27.9 crore, but we expect it to stabilise around 25 crore.

At the time of the merger announcement, Vodafone and Idea were supposed to operate as separate brands. However, recently the company rebranded itself as ‘Vi’, creating a unified identity, two years after the merger of erstwhile Vodafone India Ltd. and Idea Cellular Ltd. The company termed the rebranding as the final step towards integrating the two brands, which have had vastly different appeals among customer segments. The operator also acquired the co-sponsorship rights of the upcoming IPL 2020.

These activities have led investors to believe that the Indian telecom market will no longer be a duopoly. Hence, probably investors have started to discount this in Bharti Airtel’s share price.

Similar to the MSCI rebalancing last month, FTSE also announced changes to FTSE all-world index. It will implement the recent changes to the foreign ownership limits of Indian companies over four quarterly tranches starting from September 2020. FTSE can periodically update the rebalancing names till September 18 and according to reports, Bharti Airtel is likely to see outflows of $128 million.

This has intensified the outflows for Bharti Airtel.

In the broadband space, one does not need to disrupt the market to get an entry into the broadband space. There is adequate room for all to expand as it is a vast untapped market. Mobility-like tariff competition is also not feasible because, compared to wireless, capital intensity in the broadband business is higher.

However, against market expectations, Jio is now looking to disrupt even this space. Reliance Jio revolutionised, the home broadband space, by not only offering lower-end plans but also unlimited data. The lower-end plan offered by Jio is even lower than many mobile plans offered.

Unlike mobile, Bharti Airtel responded fast to this aggression to protect its turf. Not only did the company launch a lower-end plan, but also started offering unlimited data on all its plans. 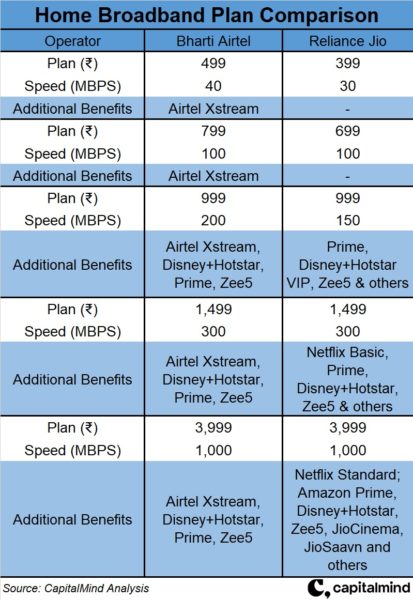 This aggression in the broadband space could lead to subscriber churn and lower ARPUs which will result in lower revenue and EBITDA. Space was expected to see strong traction in coming quarters due to the Covid-19 pandemic which has created the perfect storm to boost broadband penetration in India.

Mukesh Ambani in RIL AGM speech said that it is ready for 5G trials as soon as the spectrum is made available. World-class 5G service in India can be ready for field deployment next year, the chairman of RIL added.

Deploying 5G in India anytime soon would hurt the other two private operators as the same would need much more capital expenditure. To deploy 5G, the operators would not only have to invest in the spectrum, but also on equipment.

The capital expenditure on the spectrum alone could be to the tune of ₹ 85,000 crore given the current reserve prices. Based on reports, a single operator could have to incur at least ₹ 70,000 crore in total to deploy 5G in India. Now given the fact that the other two private operators are still incurring capital expenditure on deploying 4G and given their financial status, 5G in India is less likely to come anytime soon.

But given Jio aggression seen in the past, the possibility of a 5G launch has been an overhang on the share prices.

Reliance Jio has an ambition of getting all feature phone users or 2G users on its network. It is planning to do so by offering them low-cost smartphones. It has partnered with Google to launch a low-cost smartphone-based on the android platforms, unlike JioPhone which was on KaiOS platform.

This partnership will serve two purposes.

JioPhone has its three years anniversary approaching wherein the JioPhone customers may look for their refundable deposit. Reliance needs to offer a better alternatives to retain these customers. At the end of FY20, Jio had 10 crore JioPhone customers of which around 60 lakh users will be coming out of their 3-year contracts by the end of 2020. 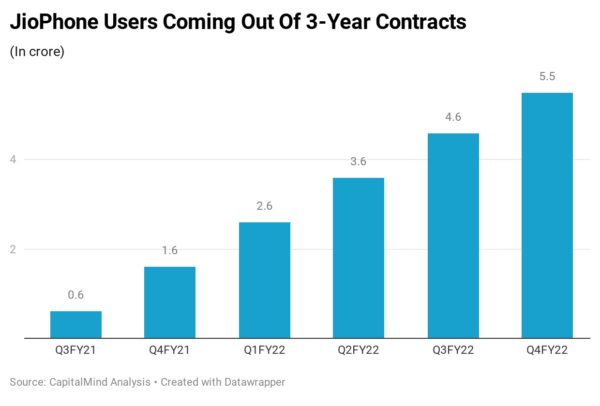 Despite the growing adoption of data, feature phone users still dominate the overall mobile device mix in India. And the launch of these smartphones could help Jio grab these customers. Of the total 75 crore mobile users, 64% are feature phones or 2G users. Most of them are on Bharti Airtel and Vodafone Idea’s network.

This renewed force to capture the feature phone market with Google backing could have an impact on Bharti Airtel and Vodafone Idea’s user base. After JioPhone, this is Reliance Jio’s second attempt at targeting the feature-phone users who are currently on 2G networks. Reliance Jio forayed into the feature-phone segment through JioPhone in September 2017.

How Fast Could Be The Shift

The launch of these smartphones could definitely help Jio to get 2G users onboard. But the price points of these phones and tariffs would hold the key. Even in the last three years despite offering phones for free, JioPhone has been able to capture just 21% of the feature-phone market.

Now that is because not all 2G customers can afford the starting price of ₹ 75 which Jio offers on JioPhone. Bharti Airtel and Vodafone Idea have a starting tariff of ₹ 49 which protects low-end users. Thus, a rapid market share shift among feature-phone users due to the launch of low-cost smartphones is unlikely as these devices will cost more.

Even if we assume that the phone pricing is similar to that of JioPhone and tariffs will be in line with the cheapest JioPhone plan of ₹ 75, a switch will still require a meaningful jump of 53%. The selling on Bharti Airtel counter would ease of post the FTSE rebalancing. But the threat arising from one of its competitors – Reliance Jio – would continue to loom over the share prices. Over the next couple of quarters, an increase in weightage in the MSCI and FTSE indices and the tariff hike are the key positive triggers.

As Bharti Airtel gets appropriate government approval to increase the FDI limit to 100%, MSCI and FTSE indices would look to increase Airtel’s weightage. Vodafone Idea does not pose a bigger threat because it would need a tariff hike to survive. This tariff hike will indirectly benefit Airtel, and if there is no tariff hike, then the chances of Vodafone Idea surviving are low.

The last round of tariff hike was done in December 2019. Another round is imminent, but timing the same with any precision is difficult.

To get full access to our premium research, model equity and debt portfolios, and vibrant member forum, subscribe to Capitalmind Premium. Use code CMPOFF10 to get 10% off regular price.