The final outcome of the AGR case from the Supreme Court bench led by Justice Arun Mishra has not only given the Government of India clarity on how and when it will be receiving the balance payment but has also removed an overhang on Bharti Airtel Ltd. and Reliance Jio Infocomm Ltd.

The SC has asked the telecom operators to pay 10% of the balance dues before March 2021 and the remaining dues can be paid over the next 10 years with an interest rate of 8%. It has also said that the NCLT will decide on whether the sale of spectrum assets can be allowed under the insolvency process.

In the judgment copy, the SC has specifically said that where the entire spectrum has been traded, the past dues shall be the liability of the buyer and in case of part trading of the spectrum, there won’t be any liability on the buyer. 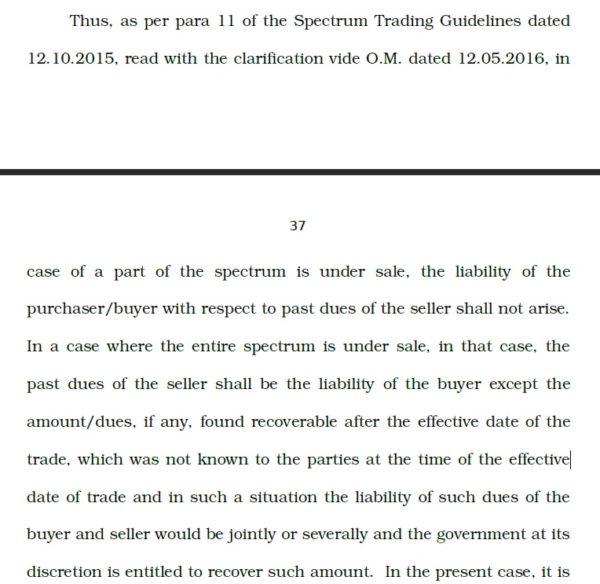 As mentioned in an earlier post, Airtel had traded the entire spectrum of Videocon, while in the case of Aircel it had partially traded spectrum. Similarly, Reliance Jio also had partially traded spectrum with Reliance Communications. Given the SC judgment, Bharti Airtel will have to bear an additional AGR liability of ₹ 1,376 crore of Videocon as it had bought the entire spectrum.

The Government of India had earlier sought a 20-year staggered payment, while the two main telecom operators – Airtel and Vodafone Idea – were fine with a 15-year payment period. Earlier, as Airtel had traded spectrum with Videocon and Aircel and Jio had traded and shared spectrum with Reliance Communications, the SC had raised questions on whether the existing operators – Airtel and Jio – be held liable for part of the past dues of bankrupt companies.

What Does It Mean For Operators

Lesser number of years will lead to a higher payout, which could strain the cash flows of the impacted telecom operators – Airtel and Vodafone Idea. However, this would not be of much an issue for Bharti Airtel, which generates higher EBITDA, but Vodafone Idea could struggle to pay.

The annual payment of AGR dues accounts for 10% of the annualised Q1FY21 EBITDA for Bharti Airtel, while for Vodafone Idea it is more than what they generate. Vodafone Idea has plans to achieve an additional ₹ 4,000 crore of annualised cost savings in 18 months. After accounting for these cost-saving initiatives, the AGR payment would be close to 63% of its EBITDA.

Apart from AGR dues, Vodafone Idea also has to incur capital expenditure, pay the non-spectrum debt, and interest liability, and starting FY23 it will also have to make payments for spectrum debt and interest liability. The company will need cash of nearly ₹ 38,000-40,000 crore to meet these expenses. It can manage these payments only by increasing tariffs, getting more subscribers on its network, and/or by upgrading its low paying subscribers to higher tariff plans.

According to CapitalMind calculations, the company will need ARPU of ₹ 287 – a jump of 140% – In FY23 to meet these expenses. This is assuming an EBITDA Margin of 40%. 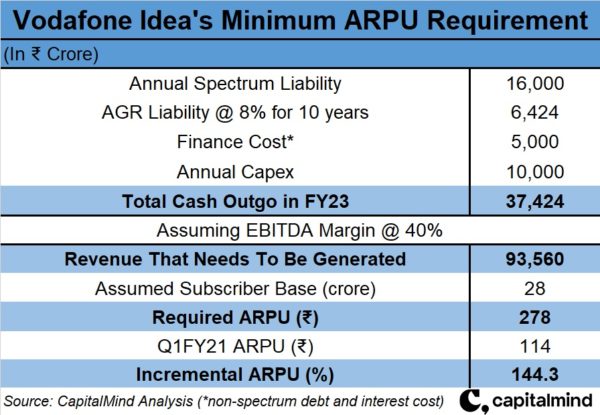 An incremental ARPU of more than ₹ 150 is definitely a tall task for Vodafone Idea which means it will continue to face a severe cash crunch and its survivability will always be under the clouds.

A combination of the tariff hike, government relief measures, an equity infusion by promoters or a strategic investor and any potential surrender of the unused spectrum to reduce future liability seems to be the only route to ensure survival for Vodafone Idea.

However, in the meantime, the other two operators – Bharti Airtel [Premium] and Reliance Jio – will continue to benefit from tariff increases and underinvestment of Vodafone Idea on the network.

As per Bharti Airtel’s counsel, there is an option to file for a review and curative petition for two things – exclusion of SUC related charges as the case was only related to license fee and on timelines of payment. Elimination of SUC in the liability could reduce the liability by one-third. However, with categorical clarity of “no-reassessment or revaluation” of liabilities, there is limited hope of downward revisions in liability. But there are hopes on an extension of payment timelines.

Even if the telecom companies get an extension, then too Vodafone Idea’s survivability will be under the clouds. This is because the company will still require a more than 130% jump in its ARPU by FY23 to meet its expenses. 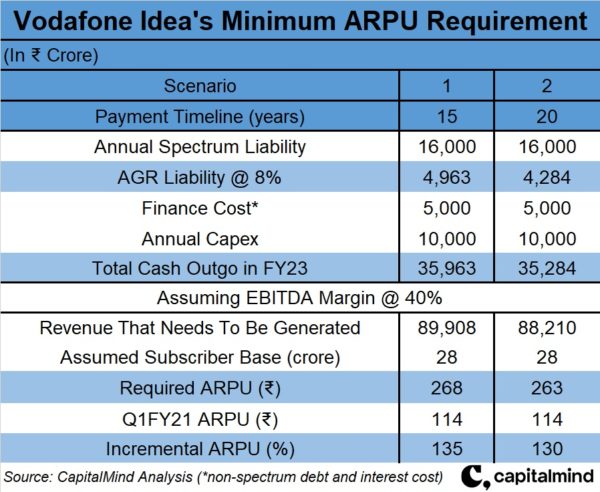 This article is for informational purposes only and should not be considered as recommendation to buy or sell any stock.

For full access to our Premium research and Portfolios, subscribe to Capitalmind Premium. Use Code CMPOFF10 to get 10% off regular price.