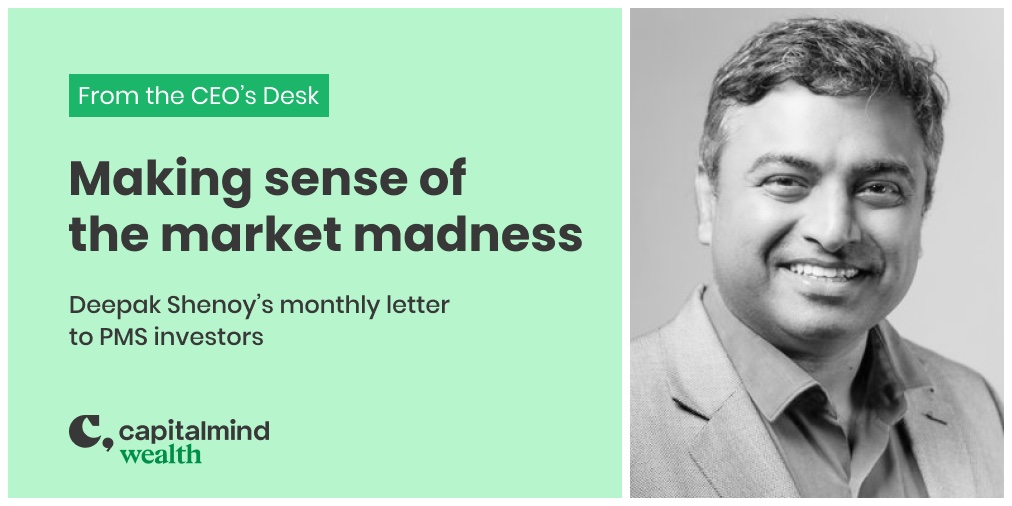 The situation just seems to get better and better in the markets, while the economy stumbles over Covid. What explains this madness? That’s the question we’ve been pretending to answer all month. Just today, I fended off a journalist who wanted my thoughts on “the market was up only 0.2% in the morning, but it’s up 0.5% now, what might be the reason”?

Of course tracking such things is asinine, but we have to look at it a little deeper. Journalists want to write stories because people want to read these stories. In other times, you would be sent to the back of the class, to stand facing the wall, for asking such inane questions. But now, it’s kosher, and that tells you the real story.

And that story is that there’s a lot of enthusiasm in stock markets, and significantly from retail investors. This enthusiasm has shown in the volumes. From average volumes of about 40,000 cr., we are now seeing average daily volumes cross 60,000 cr. in the last few months. This has caused a reasonable jump in the prices of a number of companies, and going by numbers in July, people have actually withdrawn from mutual funds to put in money directly into stocks.

Partly, this is a function of a lockdown that forces a lot of the wealthier people to work from home, and takes away their freedom (perhaps justifiably) from going to malls, restaurants and movies. And weddings, large gatherings, hotels and travel. This has resulted in savings of money, which the books will call “disposable income”. And then, with the availability of time, the money makes its way to the stock market. That, combined with the money printing in the west, where over $5 trillion dollars seem to have been printed, have really pushed up stock prices.

The economy on the other hand isn’t doing very well. The situation is dire on the street, as the recent GDP figures show. A -24% print on the gdp means we are about 1/4th less than a year ago. But it’s the details that get you, always. What’s really fallen?

The Finer Details in the GDP

GDP is seen in two ways – Components and Sectors. None of this is exact, and will be revised later when new data comes. The sector numbers are clear- only Agriculture seems to be okay, mostly because we all need food but also because of the rural migration. Everything else is in trouble. 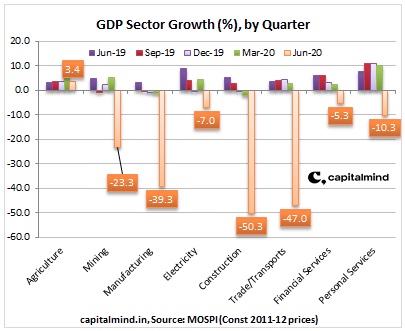 The Component part shows us the damage from a different perspective. Private consumption is down 26%, and remember, it’s 2/3rd of the economy. This is how the economy is: People aren’t spending, they aren’t investing into new projects, they aren’t exporting and they’re importing even less. In such a time it’s impossible to believe that markets continue to go up. While the disconnect continues, the only thing we should care about is: What’s going to end this madness?

There are many answers but it’s obvious to me that it will not be the obvious ones. The economy being bad is of no concern to the stock market. Bad news will be bought. Markets climb a wall of worry. Then what else?

We have to watch liquidity. The fresh breath of money flowing in – from the pockets of people who want to day-trade, from foreign investors that have just been giving more money through stimulus, from near-zero interest rates in the west and so on. That pushes up markets but if that’s what pushes markets up, then taking away liquidity is what will push it down, you might think?

There are no barriers to liquidity in the west, as evidenced by the dramatic increase in Tesla’s stock price. Which, after a 20% correction, is still up 33% from the 1st August!

But there’s something troubling, at least in the initial stages, in India. One is the margin/pledging changes. After the disaster at Karvy, SEBI has decided that things in the brokerage world will change. The new rules, which have started to apply from September 1, change the game somewhat. For one, “pledging” shares for margin, a common activity in the market, was usually done by transferring your shares to your broker. From now, no shares will be transferred and only a “lien” will be marked against them in the demat account.

For another, SEBI has mandated that brokers charge upfront margin on any transaction, which means that even to sell shares, people might need to place some cash. This one isn’t as bad because brokers may be able to get around it easily. But both these new rules dropped liquidity by 20% in the first few days of September. NSE has provided an extension till September 15, but this rule, as it comes along, might change more than we realize.

There are other issues, too. With the economy hurting badly, the tax collections of the government have been much lower than expected. They’ve told states that they can’t pay them quite enough, and states now need to borrow through the RBI. The center too must increase its borrowing. All of that reflected in a spike in yields in August, which hurt all bond funds. Meaning: Interest rates rose briefly, which is not the effect the authorities wanted. The RBI has come in with some sort of reprieve, but given the nature of the beast, it is quite likely we get more such scares going forward, and with the RBI needing to take stronger action.

All this, however, is just details. We might not remember much of this in the years to come, but it does tell us something right now: we’re being lulled into complacency by the massive glut of liquidity. In more understandable terms, we’re getting the feeling that no matter what happens, stock markets are invincible. Unfortunately, the markets themselves teach us why that statement is wrong.

More importantly, however, is that we should plan for a recovery. It’s a slower recovery than we initially thought. Even when the lockdowns are open, things are not going back to normal. I went to Mysore with my family, stayed in a hotel, and have lived to tell the tale (so far). The trip was eye opening. We were one of three families in the zoo, which I won’t complain about, but I worry that they’ll shut it down if it stays like this. The hotel was barely operating one floor out of four, for lack of guests. Many restaurants seemed to be shut and only doing “deliveries”. There was little traffic, and they’d even shut down a few traffic lights because of that. In this environment, we’re seeing hardly any movement in hotels, travel, tourism and shopping. We might all shop online, but online commerce is probably less than 5% of what Indian retail is, and much of that retail seems to be very negatively impacted.

We seem to keep harping upon this. The way down is not the same as the way up. You can’t reduce people’s salaries because they don’t like it, so you choose to fire them instead. (Corona was an exception in the beginning, but now the job losses are upon us). People don’t reduce rent easily – tenants leave, and the new ones will offer a lower rent. You have to, in some way, see destruction before creation comes along. And that, we believe, is the way we’ll recover.

This has played out in Telecom. The weakest in the game have been broken, and will eventually gift their subscribers to the two winners. Extremely high debt has forced out players like the Thapars from an asset like CG Power, which a less leveraged Murugappa Group has managed to bid for, asking banks for a 50% haircut. All of this is a part of the destruction and creation process.

The simple form: Out with the old, in with the new.

In terms of how we see this pan out, it’s most likely going to be in random order but there are some “green shoots”:

While we’re positive on the economy in the longer term, we anticipate that things will get worse before they get better. Our allocations to equity may change dramatically, because the situation is such. The best way to participate in such a market is to react, not to predict. Like in the medical side of Corona, no estimate will come even close to true.

While we go through the motions, the main thing that people ask is: Buy more, or get out? The answer, we believe, is to let this play out and just rework allocations as time passes. We don’t have to win every battle, we just have to last long enough to win the war.

There’s a famous saying in the markets:

If you lose all your chips, you can’t bet.

Our emotions tend to live on one of these lines at every point in time. The real power lies in between them.