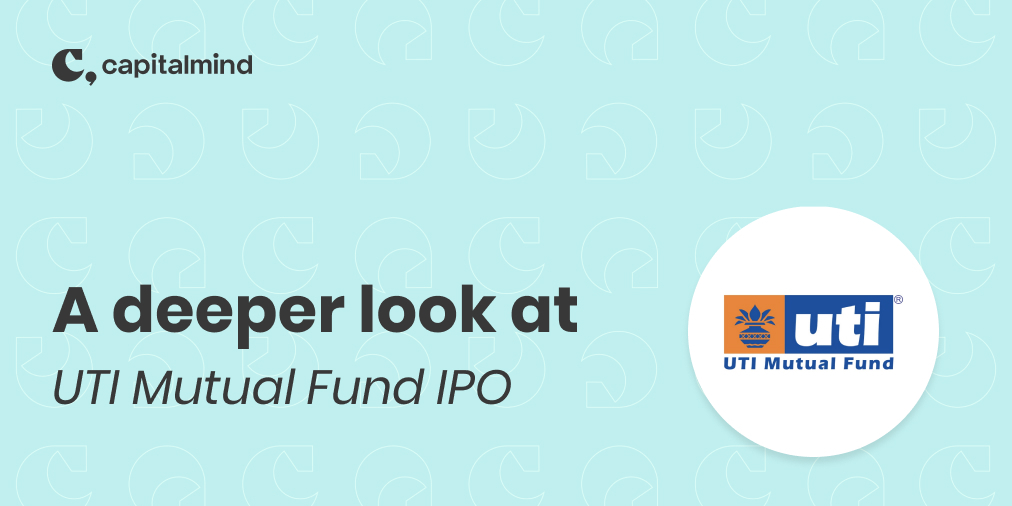 In this post we look at the domestic mutual fund industry and UTI’s business and its prospects.

What we look at 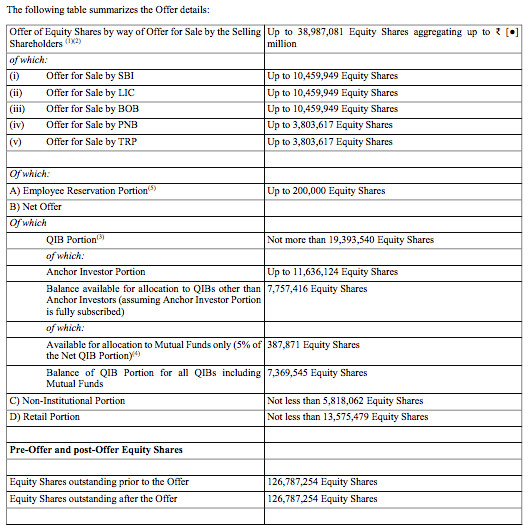 Mutual fund are 1% of gross savings. The runway for mutual funds in the country is huge.

The Indian mutual fund industry has history of over 50 years, starting with the formation of Unit Trust of India. UTI launched its first scheme, Unit Scheme 64 in 1964.

The doors of the mutual fund industry were opened to the private sector in 1993. Kothari Pioneer MF was the first private sector MF launched in July 1993. The year also saw the first formal MF regulations, surprisingly UTI did not come under the ambit of these regulations. The industry body Association of Mutual Funds in India (AMFI) was set up in August, 1995. 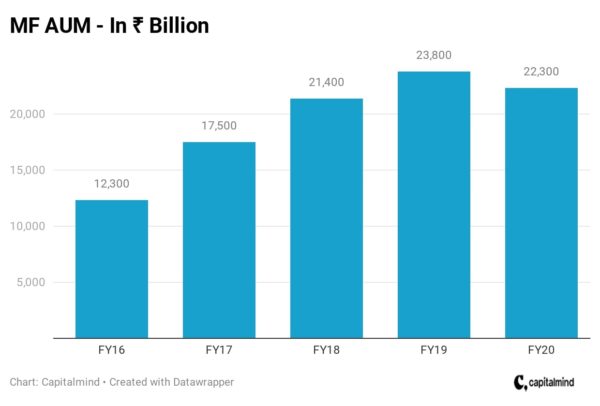 Net AUM of the industry at the end of August,2020 stood at ₹ 27,494 billion. Debt oriented schemes formed 46% of the total assets. Below is the break up of the AUM by asset class for FY20 and August,20. The no of folios for each asset class is also shown below 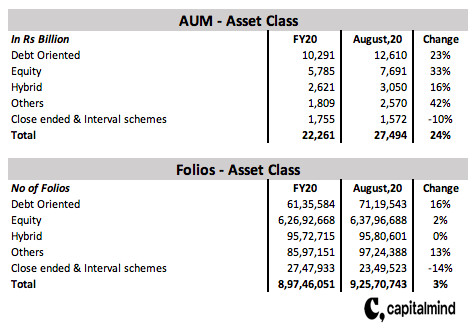 Of the 12,610 billion of assets for debt oriented funds, 4,274 billion were liquid and money market funds. Others include – Index funds, Gold ETFs,Other ETFs,FOF overseas and solution oriented schemes. FMPs form majority of the close ended schemes.

The surge in the AUM can be attributed to the EPFO monies investing in these ETFs. SBI and UTI are the major players in this space. This segment is dominated by Institutional investors, however retail participation is picking up (CPSE and Bharat 22). The ETF share in the US is 35-40% and there is a long runway for these products in India.

SIPs are a powerful and popular tool among retail investors. The SIP contribution has increased from ₹ 43,921 Cr in FY17 to ₹ 1,00,084 Cr in FY20. Below is the month wise SIP contribution for the FY17-20 period 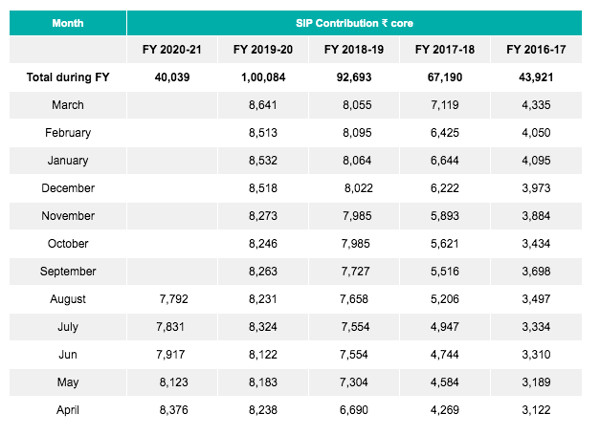 In September,2012 SEBI mandated mutual fund houses to offer their products through the direct route alongside distributors or the regular plan. This was a popular step and AUM’s under direct plans have grown at 25% CAGR over the last 6 years. Direct plans now account for 45% of the industry’s AUM, these plans accounted for 35% of the assets in FY14.

The split between direct and regular changes as per asset class and class of investors. Individual investors prefer hand holding and 86% of retail and 78% of HNI’s assets are through regular plans.

In terms of asset class,81% of the equity assets are through regular plans and 47% of the debt AUM is from regular plans. 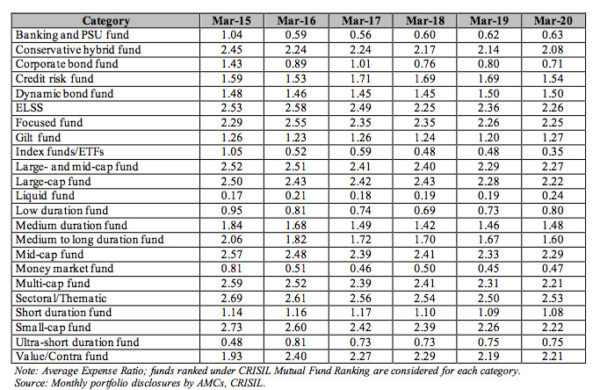 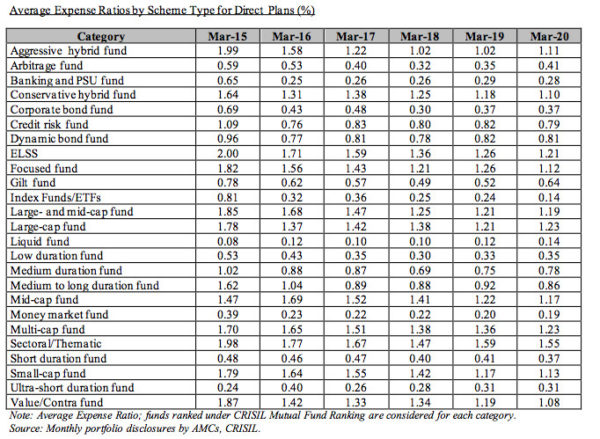 Players in the Mutual Fund Industry

The MF industry is highly fragmented, there are 43 AMCs in the Indian market, however 84% of the AUM is with 10 players. Below is the split of the quarterly AAUM by AMC at the end of June 30, 2020 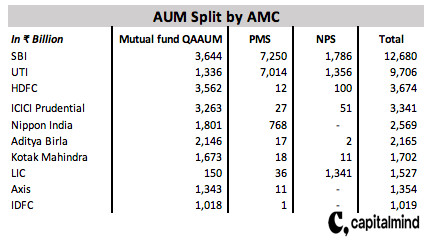 If we were to consider only AAUM of the domestic MF industry, SBI is the leader with AAUM ₹ 3.64 lakh Cr, followed by HDFC with ₹ 3.56 lakh Cr. UTI is the 8th largest with AAUM of ₹ 1.33 lakh Cr. 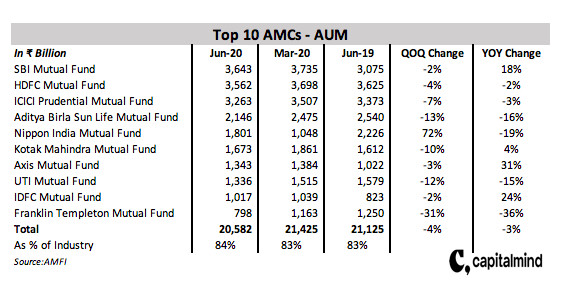 UTI AMCs predecessor Unit Trust of India was established in 1964. In 2002, Unit Trust of India was bifurcated into two separate entities – SUUTI, which would manage assets of Unit Trust’s flagship brand Unit Trust 64, the other entity was UTI Mutual Fund. It’s sponsors were SBI, LIC, PNB and BOB. UTI AMC was incorporated on November, 2002 and appointed by the trustees to manage the funds of UTI MF. In January 2010, T. Rowe Price Group acquired 26% stake in the company. UTI AMC has 4 subsidiaries.

UTI AMC derives revenues from 4 streams – domestic MF business, PMS, Retirement solutions, Off shore fund management and AIF. Let us look at each of these verticals

At the end of September,2019 close ended income funds had an QAAUM of 119 billion and there were 125 schemes offered by UTI in this space.

Below is the QAAUM and number of schemes as on June 30,2020 for the categories of domestic MF that the company manages 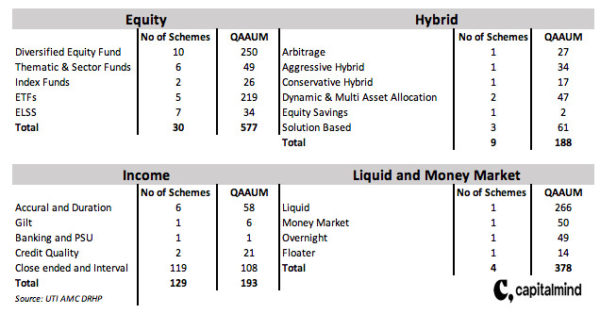 Fees: Source of Income for an AMC

AMCs generate income mainly from the fees which are based on specified percentages of the net asset value of the funds that they manage. These are called “Management Fees”. This fees covers fund management services and support services such as fund accounting and other administrative functions.

Percentages that AMCs can charge are regulated and are called Total Expense Ratio (TER). TERs are calculated by dividing the total costs of the fund by its average total assets.

Scheme expenses – including all management fees, distributor and agent commissions, RTA fees, custodian fees, audit fees, insurance costs, bank service charges, marketing and selling expenses and investor communication costs must not exceed the applicable TER for a scheme. New issue related expenses are borne by the AMC and not the scheme.

Management fees with respect to the domestic mutual fund business forms about 73% of the company’s total income.

The PMS business was started in 2004 and UTI offers discretionary and non-discretionary PMS. The company also offers research based advisory services for both domestic and overseas clients.

The increase in the PMS AUM is due to the CBT and EPF handing over additional portfolio of ₹ 3,283 billion on April 1, 2019. In September, 2019, UTI was selected as one of the two fund mangers to manage the corpus of EPFO for period of 3 years and in October,2019, UTI was approved to manage 55% of the corpus of CBT, EPF for 3 years starting November,2019.

The fees charged in the PMS business is based on the relationship with the client, fees charges is less than the domestic MF business.

UTI was one of the three AMCs appointed by Pension and fund regulatory and development authority (PFRDA) in 2007 to manage pension funds for central and state government employees under the NPS. UTI has a subsidiary UTI RSL to manage such funds and since 2009, NPS contributions from citizens other than government employees are also accepted.

UTI international offers funds to offshore investors who want to invest in India. There are 3 offerings in this segment.

In the AIF business, UTI seeks to invest across various sectors. The AIF business has varying fee structure around annual management fee and performance linked incentive.

UTI provides its services to SUUTI and generates 1.3% of revenues from these services.

Below is the some important P&L metrics for UTI AMC

The company has an ESOP plan 2007, the details of which are shown below

There have been options granted in FY20, details of which are as below 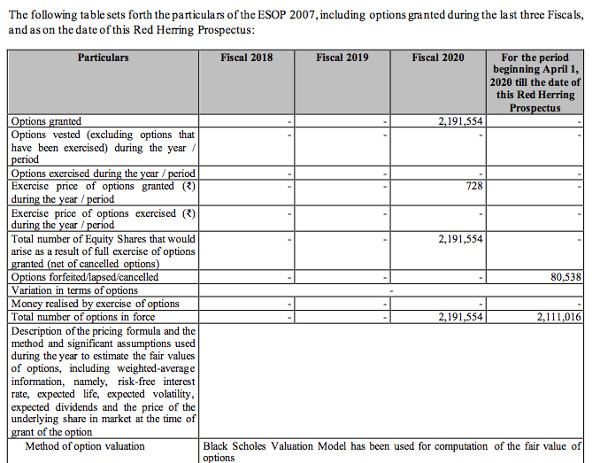 UTI retired and VSS employees social association has filed petitions in the Bombay high court demanding a switch from the earlier provident fund scheme to pension scheme. The estimated liability of this switch is Rs 1000 Cr. A third party agency has calculated the liability to be in the range of Rs 365 Cr – 721 Cr. Liabilities arising in the future will be borne by the government of India. Currently these petitions are pending. Although any liabilities arising in the future will be borne by GOI, we do not know how this will pan out, we will have to have a closer look at this development and see if any liabilities actually arise and who will actually bare it.

Another litigation is where the same association has filed a petition against the company is challenging the legality of UTI AMC pension regulation,2003. The demand is to be paid pension under UTI pension regulations, 1994. The estimated liability arising out of this is Rs 200 Cr.

The EBITDA and PAT margins of the AMC business are very attractive, however we shouldn’t be lured by it. The industry is highly competitive as is evident from the number of AMCs in the country, the leader in the domestic MF space has a market share of 14%.

There are three key drivers which help the AMC generate revenues

However in the AMC business it is not only quantitative factors that matter, there are softer or qualitative factors that also matter. The AMC business also depends highly on trust, transparency and honesty. Take the case of Franklin Templeton, its AUM at the end of June,20 was ₹ 798 billion as compared to 1,250 billion a year ago, after it decided to shut its 6 schemes earlier this year, investors started withdrawing from its other schemes. Its equity fund manager had to come and assure investors about the safety of their equity investments. Reputational risk in this business is more than other businesses.

Stability of AUM is another important aspect of the business. Companies with strong brands will find it easy to retain customers and AUM. In the table posted earlier in the post we can see that changes in HDFC and ICICI’s AUM is a narrower band as compared to the other AMCs. In tough times customers would want to stick to stronger and trusted brands.

Other risks that AMCs face are regulatory risks, credit risk, liquidity risk. This was evident from the recent Franklin episode.

There are two listed AMC players, below are their key metrics in comparison with UTI for the FY18-20 period. HDFC trades at an EV/EBITDA of 27 and Nippon 24. The margins of HDFC are superior to Nippon and UTI.

UTI expects to garner ₹ 2,160 Cr from the sale of 3.89 Cr shares at the price of Rs 554/share. At this rate the market capitalisation of the company would be around ₹ 7,025 Cr. If we were to consider UTI’s EBITDA of ₹ 349Cr in FY20, this translates into EV/EBITDA multiple of 20. UTI has an added advantage of sticky money in the form of EPFO inflows. The EPS for FY20 was Rs 22, at the offer price of Rs 554/share, investors are paying 25X earnings.

The active equity AUM of UTI as on June 30,2020 was Rs 333 billion, this is the same as it was in FY17. Growth in equity AUM has mainly come from managing passive funds. PMS and retirement solutions business have also helped in increasing the companies AUM, these however earn less than active equity funds.

We would like to see growth in the active equity AUM and steps that the company takes in improving its EBITDA margins, margins have been falling since FY18. We will skip this issue and wait for important metrics to pick up.

NOTE: There is no other relationship between Capitalmind and the above company. Please do not consider this article as a recommendation, It is purely for information purposes only. 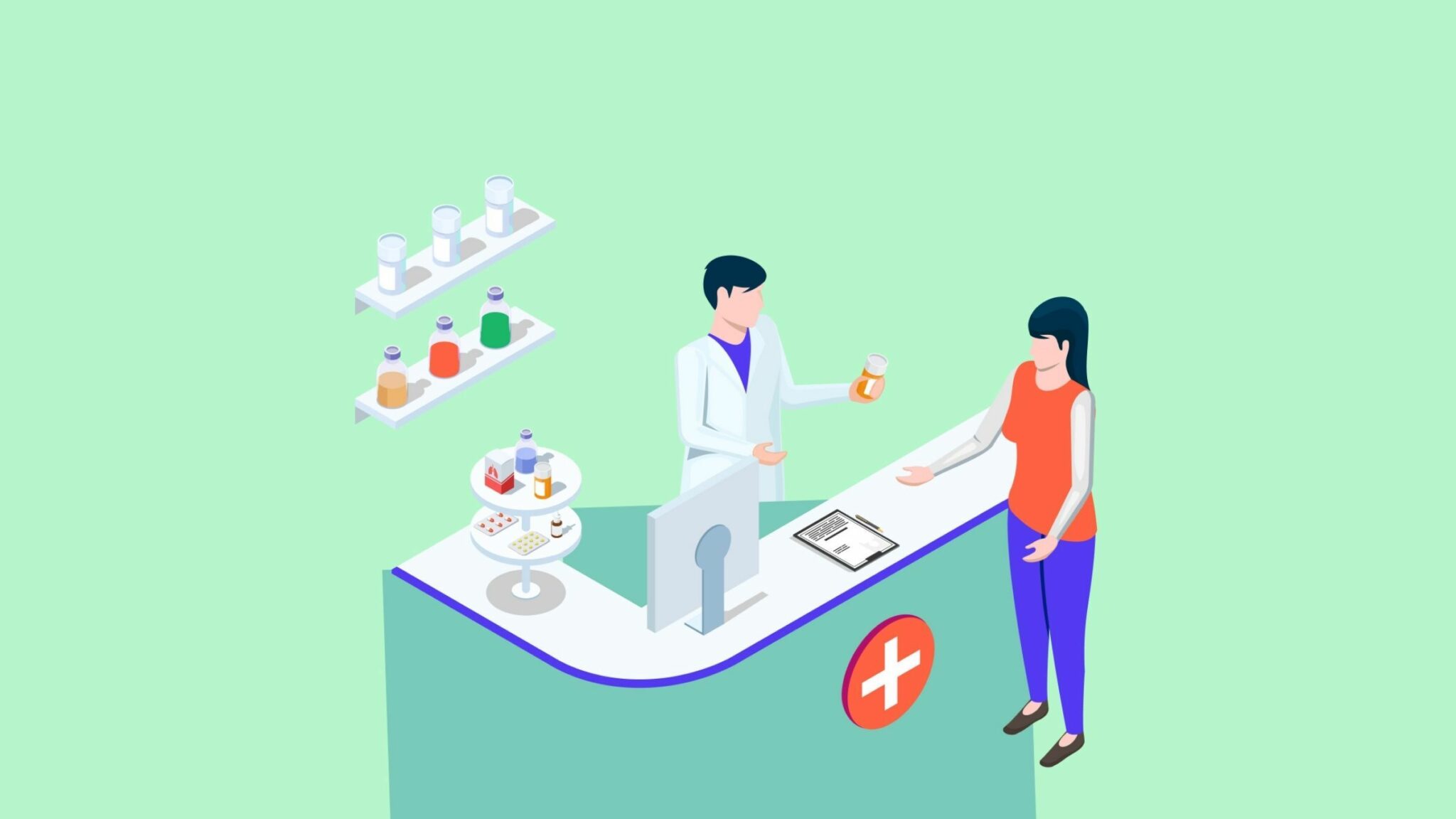 MedPlus IPO: Should you invest?

Six companies have raised money from the primary markets so far in December, while four more are opening this week – MedPlus, Data Patterns, Supriya ... 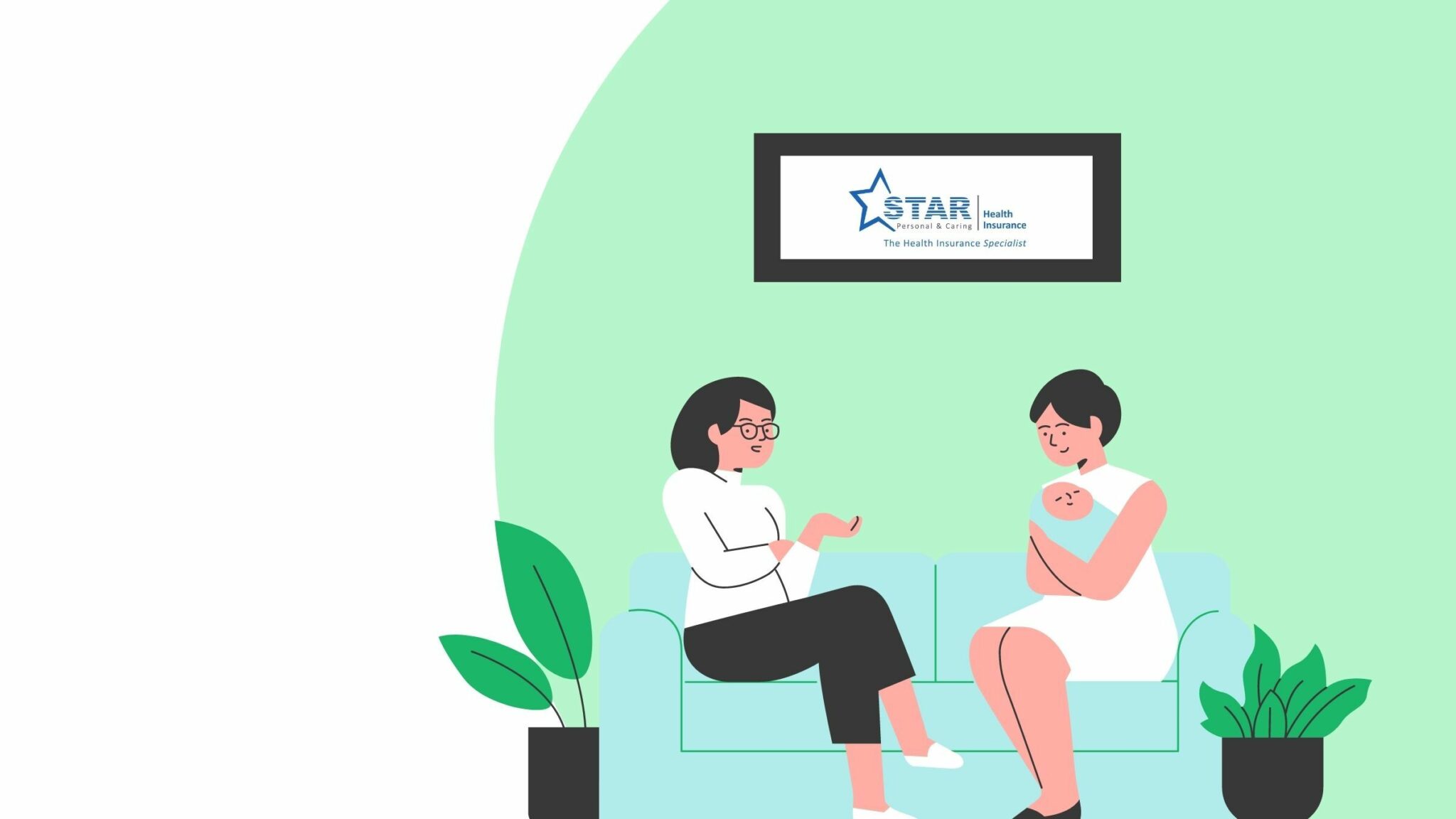 Star Health IPO – All you need to know

The IPO euphoria may be down but not out yet. Star Health Insurance, India's largest private health insurer, is coming up with an IPO to raise ₹ 7,249 Cr. It ... 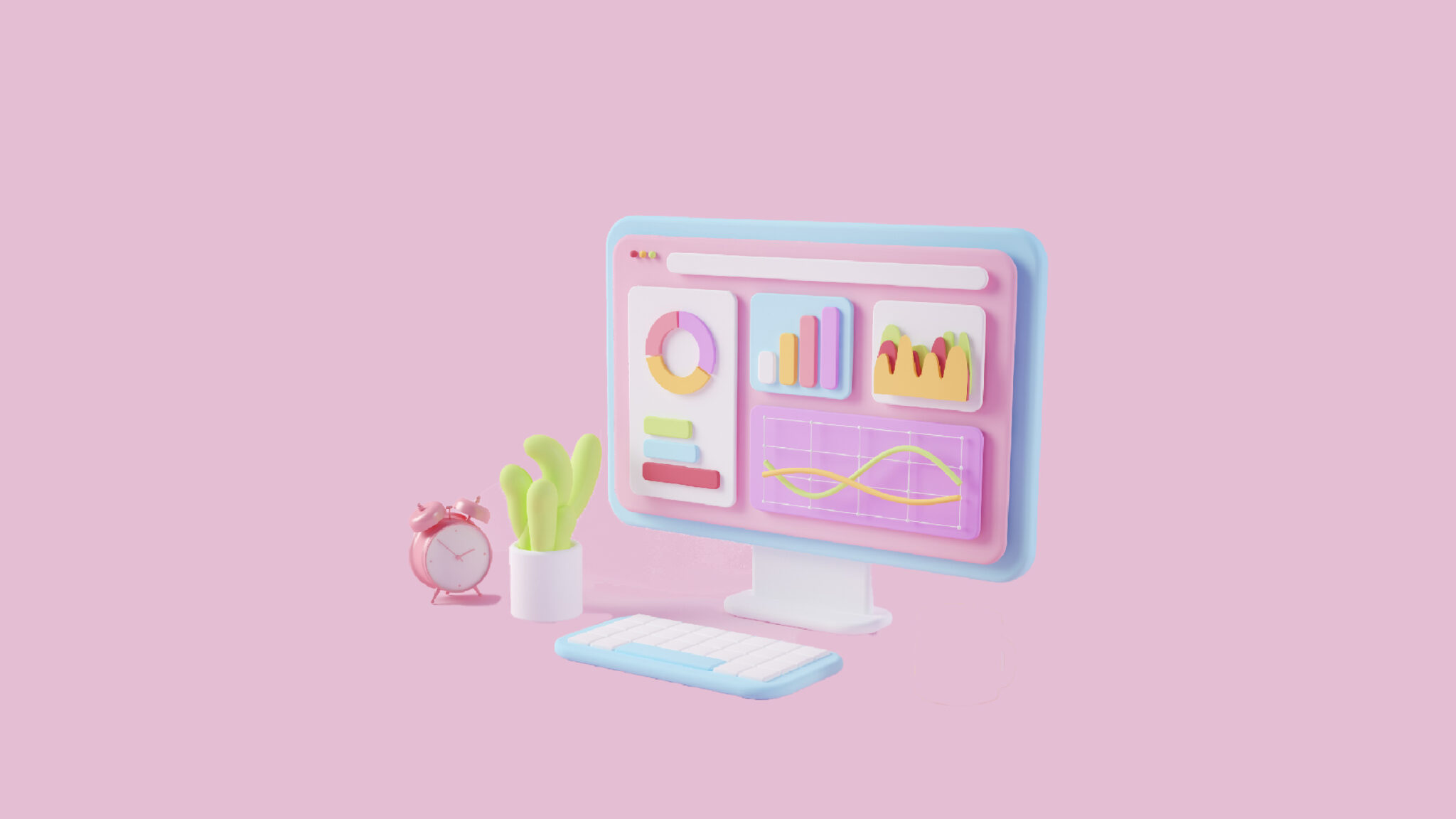 Yet another busy IPO week is on us. Three IPOs have opened this week – Paytm, Sapphire Foods, and Latent View Analytics. This comes after five companies ...