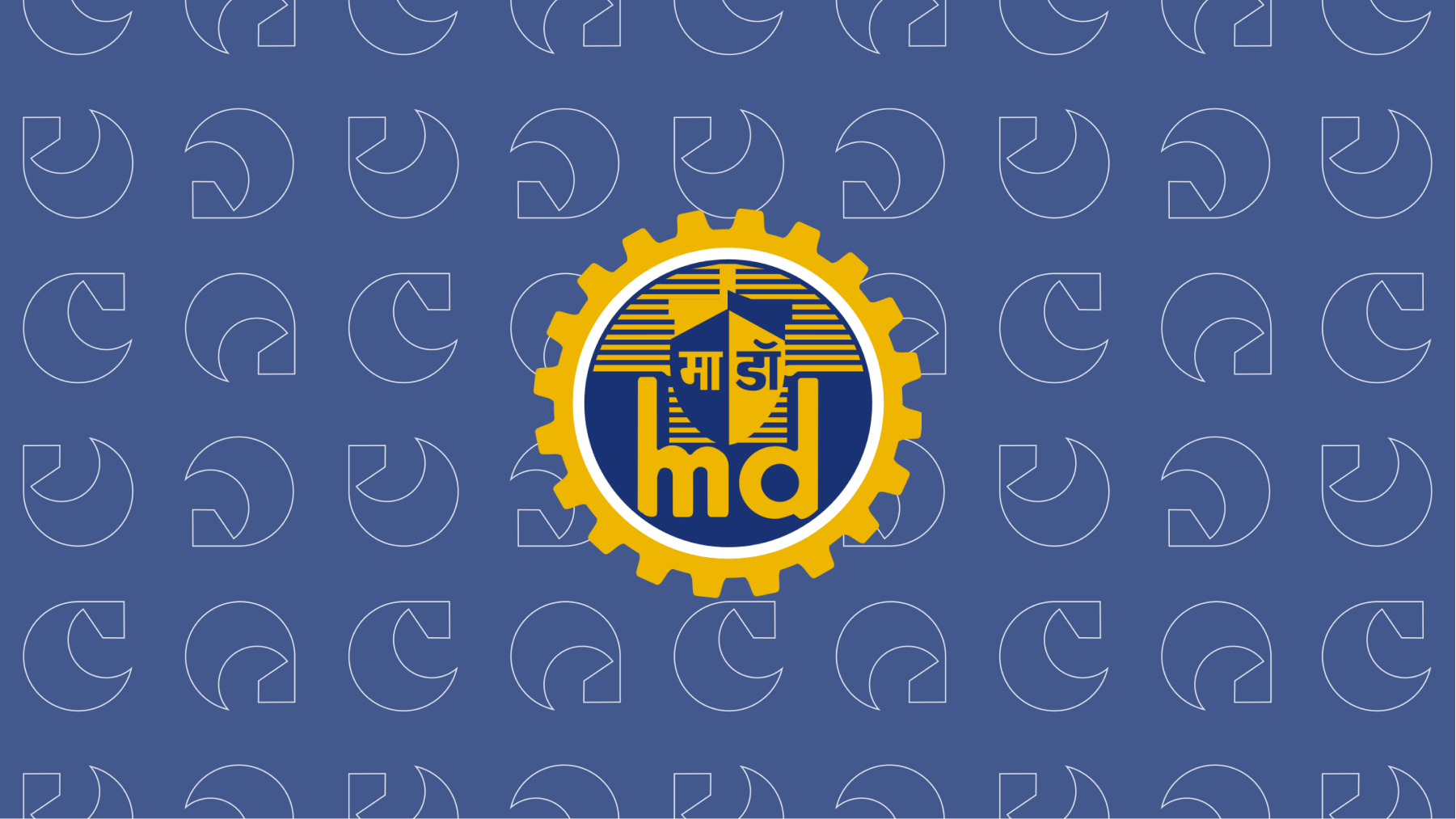 [This is a Premium article temporarily unlocked for free access]

A listing will make Mazagon Dock the third government company in the shipbuilding space to go public. Cochin Shipyard Ltd. and Garden Reach Shipbuilders and Engineers Ltd. were the earlier two which listed on the bourses.

The company is looking to raise ₹ 444 crore from the primary market via an offer for sale. The company is offering 3.1 crore equity shares at a price band of ₹ 135 to ₹ 145. Its promoter, i.e., the Government of India will be diluting its stake to 85% in the initial public offering from 100%. At the upper end of the price band, the company will be valued at close to ₹ 2,925 crore.

Mazagon Dock is India’s only shipyard to have built destroyers and conventional submarines for the Indian Navy. It is also one of the first shipyards to manufacture Corvettes in India. The Mumbai based shipbuilder has the capability to build warships, submarines, merchant ships up to 40,000 deadweight tonnage (DWT).

Mazagon Dock specialises in making destroyers and submarines and has plans to expand in ship repairing, commercial shipbuilding, and export businesses.

As of July 31, Mazagon Dock’s order book stood at ₹ 54,074 crore which includes products and services to be manufactured and delivered over the next eight years.

The ship and submarine building contracts are fixed-price contracts. This means that the impact of any cost overruns caused due to increase in raw material prices and/or currency fluctuations will have to be borne by the company. Generally, shipbuilding and submarine contracts have a long gestation period, and this could pose a risk.

In past, the company has incurred losses during the execution of a contract to build a destroyer ship due to currency exchange rate fluctuations.

This indicates that the company could have orders worth over ₹ 3 lakh crore to bid in future. 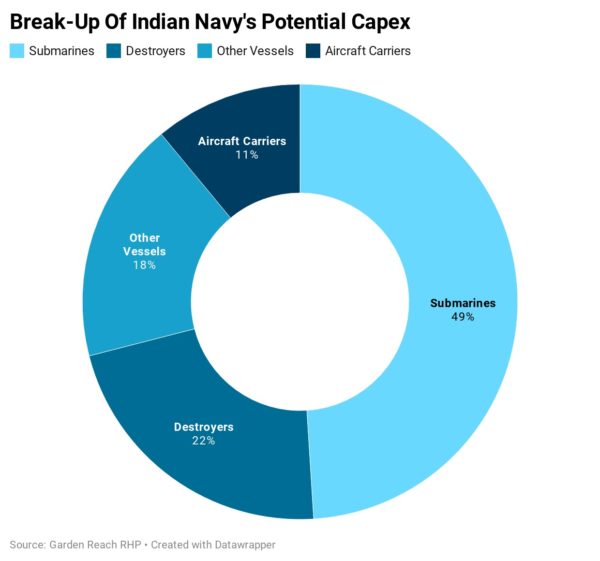 In the analyst meeting, the company did say that it is expecting RFP (request for proposal) to be out for P-75 I submarines and destroyers.

The cash on books stood at close to ₹ 5,800 crore. Of the same, only ₹ 800 crore is free cash, while the remaining cash is reserved for project use. However, the high cash on books has resulted into higher interest income for the company. This in turn has supported its earnings.

Mazagon Dock’s interest income is even higher than its net profit.

In FY20, the cash on books has reduced as the company conducted buyback of equity shares at ₹ 124 each. The total amount of buyback was ₹ 278 crore.

Over FY17-20, company revenue/EBITDA/net profit grew at a compounded annual growth rate of 12.3%/28.7%/-7.3% respectively. In FY20, the company’s net profit was lower due to a one-time non-cash tax impact of ₹ 160 crore. This was due to deferred tax asset write-offs because of changes in the tax rate slab. Along with this, there was also a Covid-19 impact of ₹ 12 crore on FY20 financials and ₹ 48 crore write-back in FY19 employee cost.

The last eight ships delivered by Mazagon Dock were delayed by 52-78 months. The delays could also be attributable to the lack of preparedness of the Navy, but even the company has provided liquidated damages on account of these delays. 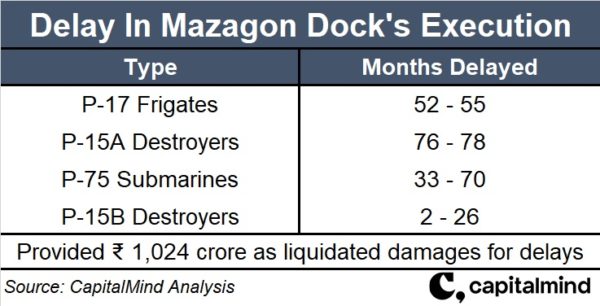 Being a government-owned company, it has been continuously declaring dividends. As per CPSE guidelines, a government company is required to pay a minimum annual dividend of 30% of profit after tax or 5% of the net worth, whichever is higher. Even if we assume, that the company pays 5% of its current net worth as dividends for the next five years, then the total amount received as a dividend would stand at ₹ 38 – 26% of the upper end of the price band.

In reality, the dividend amount could turn out to be higher given the growth expected in revenue due to order execution.

In the listed space, the company has two competitors – Cochin Shipyard and Garden Reach. Both companies are owned by the government and are also into shipbuilding for defence sector. However, there is a difference in the kind of ships that they build.

Though Mazagon Dock has built all types of defence ships other than aircraft carriers, it specialises in building destroyers and submarines. Its current order book reflects the same. The company is also expecting major orders to come in related to the same in the future.

Its listed peers do not have the capability to build or repair destroyers and submarines.

Cochin Shipyard’s past financial performance has been better compared to Mazagon Dock and Garden Reach. The company’s margins have been higher supported by the execution of high-margin ship-repair business.

Garden Reach in the base year (FY17) incurred losses on the operational front because of which the net profit growth looks optically higher. On the visibility front, Mazagon Dock’s order book provides strong visibility of future growth. The order book needs to be executed over the next 8 years.

This means that the revenue generation over the next 8 years could be higher which in turn could result in operating leverage benefits as fixed costs are high for Mazagon Dock. Generally, a company with high fixed costs tend to generate higher margins if revenue is higher.

Mazagon Dock’s earnings per share for the financial year 2020, stands at ₹ 23.7, and at the upper end of the price band, the price-to-earnings ratio stands at 6.1 times. The valuations of Mazagon Dock are largely in line with that of Cochin Shipyard on most of the metrics and cheaper when compared to Garden Reach.

For Garden Reach, the enterprise value could not be calculated as its own cash was not known.

Given the strong order book, a potential uptick in naval capital expenditure, unique capability and experience of building submarine and destroyers, possible expansion into commercial shipbuilding and ship repairing businesses, high cash balance and zero debt position, strong dividend yield, this is a decent company. However the valuations looks cheap primarily because most of the profit comes from the massive cash hoard it has, which is money that it owes to vendors but has not paid yet. If we took out the other income, the effective earnings would drop over 70% and valuations would look expensive.

An investor should be wary about the past listing performance of shipbuilding companies in India. For instance, Cochin Shipyard, which listed in August 2017, is currently trading 24% below its issue price of ₹ 432. This is despite a strong order book, strong financial performance, an uptick in naval capital expenditure expansion into ship repairing businesses, diversified clientele, high cash balance, near-zero debt position, and strong dividend yield.

The defense theme is attractive, but in the context of this being a government-run company, profits mostly because of unpaid vendors, and the potential delays in order execution combined with low margins, this might not be a useful company to invest in. We’ll skip this one.