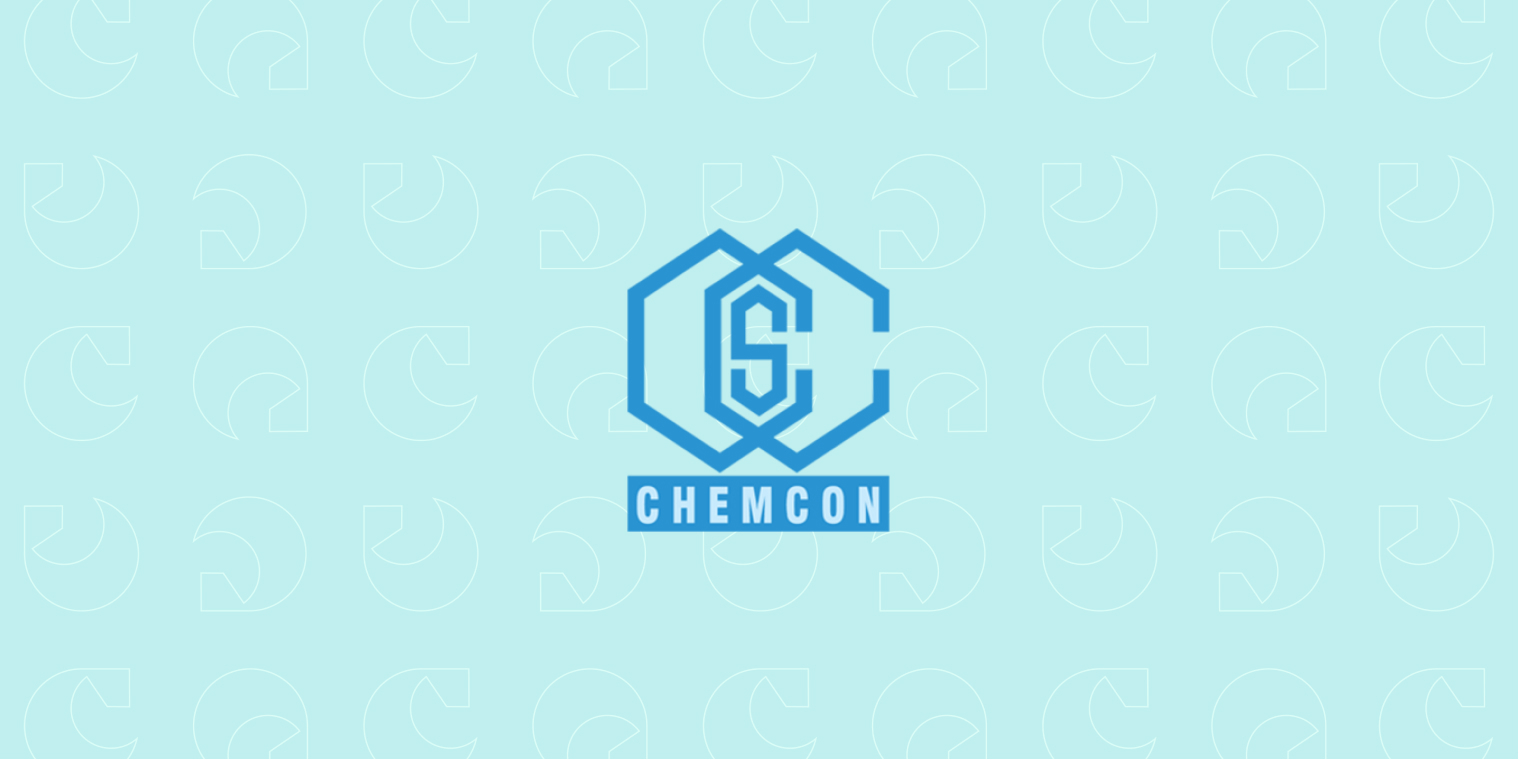 [This is a Premium Article temporarily unlocked for free access]

Chemcon Speciality Chemicals, incorporated in 1988 and manufacturer of speciality chemicals primarily catering to the pharmaceutical industry is coming to the markets with its IPO on September 21st 2020. In this post, we look at the business of Chemcon and see if the issue is worth subscribing.

Short Answer: Chemcon is the only manufacturer of HDMS and largest manufacturer of CMIC in India, a key input to the manufacture of antibiotics and antivirals. The EPS for FY15 was Rs 15, at the price of 340, we are paying 23X earnings. Revenues and profits have grown by 29% and 36% over the last 3 years. However, there are headwinds as well in the form of dependence on the oil & gas industry, a slow-growing core market. Investors should track operational performance over a few quarters after listing and not buy right now.

The offer for sale is by two promoters – Kamalkumar Rajendra Aggarwal and Naresh Vijaykumar Goyal for 22.5 lakh shares each. The shareholding pattern prior to the issue is as below The fresh issue of 165 Cr will be used for CAPEX, meeting working capital requirements and general corporate purposes.

Pharma intermediates are chemical compounds that form the building block of manufacturing active pharma ingredient (API). The pharma value chain is as below

The global market for chemicals used as pharma intermediates was $27 billion in 2019. North America and Europe are the biggest and the 2nd largest pharmaceutical markets. Asia Pacific will be the fastest growing market for these intermediates as this region is the hub for contract manufacturing. Drivers that will propel the intermediate markets will be higher production of APIs and patent expiration, leading to the growth of generic drug markets.

The domestic consumption of chemicals used as pharma intermediates is estimated to be Rs 334 billion in FY19, the industry has grown by 7% CAGR since FY13. Imports constitute 58% of domestic consumption in FY19 as compared to 65% in FY13. Imports have dropped on the back of withdrawal of customs duty exemption on drugs and intermediates in FY17 and tightening environmental regulations in China.

4 CBC is a newly launched product by Chemcon, the company made its first sale in July,2020.

All of its revenues from the pharma vertical come from HMDS and CMIC. Let us briefly look at the characteristics of these products – its usage, global capacity, demand and manufacturers.

The HMDS and CMIC Landscape

HMDS is used in manufacturing of antibiotics such as penicillin, cephalosporins and other types of penicillin derivatives. Some of the drugs where HMDS is used are Cefprozil – used to treat bronchitis, ear infections, skin infections and Cefaclor – used to treat pneumonia and infections of the ear, lung, skin, throat. The global antibiotics market was estimated to be $ 44.8 billion in 2019, cephalosporins have the largest market share at 26% amongst all antibiotics.

HMDS is also used in anti-viral and antiretro viral medications. Some of drugs where HMDS is used are Sofosbuvir – used to treat hepatitis C and Emtricitabine – used for treatment of HIV infection in adults. The global market for anti viral drugs was estimated to be $ 61.9 billion in 2019 and is expected to grow at 6% CAGR until 2023.

HMDS is also used in the semi conductor electronics and rubber industry.

On the demand front, North America and Europe are the two biggest markets for HMDS. 60% of the demand in 2019 was from these countries. Below is the country wise global demand from 2013-19.

We can observe from the above table that India has demand for 4,000 MT, however its capacity in 2019 WAS 2,400 MT. 40% of India’s demand is imports from China and Germany. 97% of the imports are from China and 3% from Germany. 93% of India’s HMDS demand is from the pharmaceutical industry. On the global scale, 68% of the global demand is from the pharmaceutical industry. The Indian demand is expected to grown by 11% CAGR over the next few years.

The primary raw material used to manufacture HMDS are trimethyl chlorosilane (TMCS), ammonia and hydrochloric acid. TMCS is used as the base chemical to manufacture HMDS, however HMDS can also be manufactured by using HMDO as input. HMDO is the residual product, which comes out during the use of HMDS by customers.

India and China are the only countries than manufacture CMIC. 60% of the capacity is with China and 40% with India. In terms of production 64% of the global production happens out of China and 36% from India. 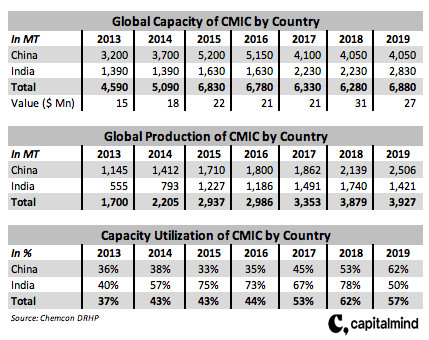 65% of demand of CMIC is from India, followed by North America and China with 21% and 13% of demand.

Methyl Chloroformate (MCF) and Isopropyl Alcohol (IPA) are the key raw materials for CMIC. Below is the quarterly price trend of CMIC,MCF and IPA for the 2013-19 period. What are oil well completion chemicals?

Clear brine fluids are widely used in drilling and well completion processes. These work well in high pressure and high temperature wells. Among chlorides and bromides, bromides are widely used as they meet these requirements.

These bromides have certain characteristics than find specific applications. For instance, sodium bromide liquid is useful when used in formations that are known to have sensitivity towards calcium.

Important metrics of the bromides market

In this section we look at some of the important metrics of the bromides market –  overall demand, regions with the highest demand and worldwide manufacturers of bromides.

Calcium bromide constitutes +50% of bromides demand. 53% of the demand is from North America. The demand for bromides in India is negligible, this is the reason why India is the net exporter of bromides.

Production of bromides in 2013 and 2019 by region and manufacturer 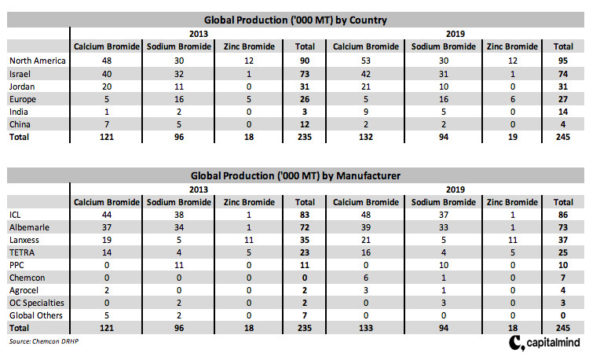 39% of the bromides production happens in North America, the highest demand is also from this region. North America has to rely on imports to meet its demands. Israel chemicals is the largest manufacturer meeting 35% of global bromide demand.

The key raw material to manufacture bromides is hydrobromic acid. Price of this depends on price of liquid bromine, this is also the costliest component in manufacturing bromine derivatives. There is no direct correlation between bromides and crude oil prices, however these are used in the oil & gas industry. An important indicator of bromine demand would be the rigs that are being drilled at a point of time, drilling rigs is a function of crude oil prices.

The current pandemic has heavily impacted the oil & gas industry. Oil exploration activities are at a low and this has impacted the demand for oil well completion chemicals.

We had covered about the chemical industry last year, it can revisited here.

The company has 3 products in the pharma business

4 CBC is a new product, which the company has started selling in July,2020. It has one more product – 2,5 DHT, commercial production of which needs to start.

In the oil well completion chemicals vertical, the company offers

Chemcon supplies its products in the domestic market and exports to countries including USA, Italy, South Korea, Germany, China, Japan, UAE, Serbia, Russia, Spain, Thailand and Malaysia. Revenues from exports in FY20 stood at 40% of total revenues. Export revenues have grown by 18% in the FY18-20 period.

Chemcon has its manufacturing facility at Manjusar, near Vadodara in Gujarat. They have seven operational plants at this facility. Two plants are dedicated to manufacturing HMDS and allied products, two plants each to manufacture CMIC and oil well completion chemicals and one plant is a multipurpose plant. The company has three warehouses and one laboratory at the facility.

In the pharma business, to be enlisted as a supplier takes a long time. Also pharma companies have stricter regulations and have to submit regular fillings. Any change in the companies suppliers will have to be recorded in the fillings, the process of then changing suppliers frequently costs time and opportunity to the customer. Hence in a way revenues for a supplier are sticky if it is able to deliver quality product to the customer, this is one of the biggest advantage the companies operating in this space enjoy.

Raw materials such as bromine, MCF and TMCS are highly corrosive and toxic in nature and need to be handled with expertise.

Capacity of the companies products as on July,2020 is as below

GPMs in FY20 were 43%, margins for FY18 and FY19 were 51% and 39%. We see wide fluctuations in GPMs. The company procures its raw materials for the pharma business mainly from China and India. Below is the location of the top 5 suppliers for the pharma and oil well chemical business.

20% of RM purchases in FY20 were from China. Below is the details of RM imported from China in the FY18-20 period

Working capital requirements have gone by 83% CAGR in the above period, whereas sales have grown by 29%. There is a hug jump in receivables, as a percentage of sales these are 34% in FY20 as compared to 19% in FY18.

Borrowings at the end of FY20 stood at Rs 43 Cr, the debt/equity ratio was 0.3. The company is on a comfortable position on this front. Borrowings constitute 19% and equity 65% of the equity and liability section.

There are few points that we have come across in the RHP and would like to highlight here.

The promoters in the past have failed to make certain disclosures under SEBI insider trading regulations in relation to their holdings in Overseas Synthetics Limited (OSL), part of the promoter group. There are criminal proceedings against one of the promoter Naresh Vijaykumar Goyal. RBI has initiated proceedings against Rudra Fincorp Private Limited, a company part of the promoter group.

The EPS for FY20 was Rs 15, at the price of 340, we are paying 23X earnings. This is not bad given that revenues and profits have grown by 29% and 36% over the last 3 years. The companies debt is manageable and its ROE and ROCE profile is impressive.

The company is also the only manufacturer of HDMS and largest manufacturer of CMIC in India. These products are essential in producing antibiotic and anti viral drugs. The company will also benefit from customers wanting to move their supplies from China. The US China trade tensions can also prove to be beneficial to the company.

However on the other side, points to consider

Looking at the above issues we feel it is better to skip this issue and track important metrics – working capital, industry growth, corporate governance and customer base after the company has been listed as the company primarily caters to the pharmaceuticals industry, which is at an inflection point.

Since our analysis is purely about the IPO, and does not consider your specific financial goals and risk profile, please consult an Investment Advisor before taking any action.