The RBI has been hailed as an excellent regulator, but it’s indeed disappointing that it chooses to fatten itself up at the cost of the Indian public and government. I don’t say this in jest. The annual report of the RBI, released recently has details. I’ll go through this point by point.

Why is the RBI buying gold, and storing it abroad?

In the course of 2019-20, the RBI has bought 43,250 kgs of gold. Legally. After telling us for years that hello, you dirty scoundrels, you shouldn’t import gold. In 2013, they even banned all imports except by nominated agencies, and of what was imported, 20% had to be exported back in some form. (Except gold. India isn’t allowed to export gold as gold.)

The same RBI, which hated gold, and even has the government make sovereign gold bonds to avoid having to import gold, is doing the strangest thing: 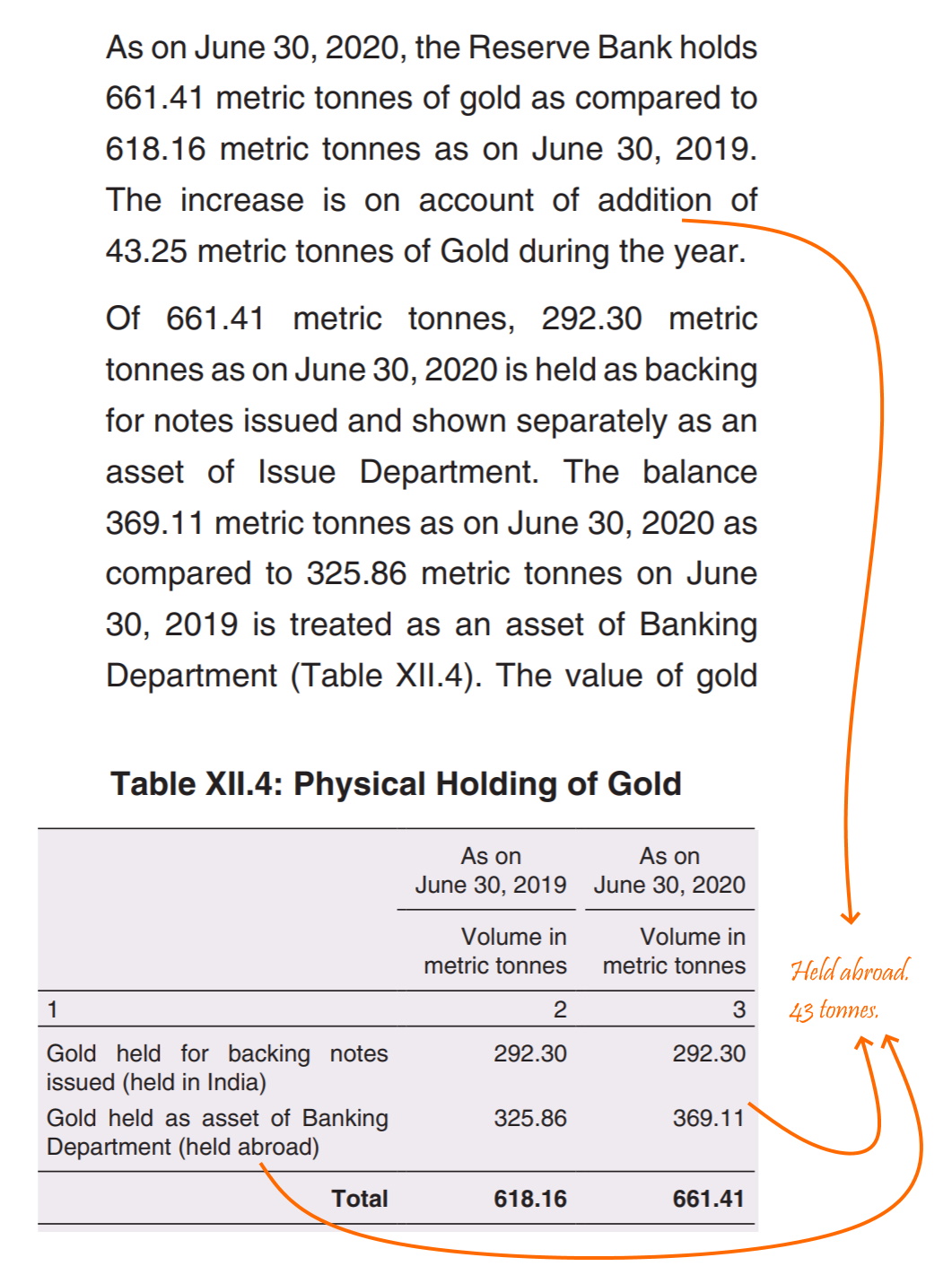 So what, you might think? Instead of holding dollars they are holding gold. What’s the problem?

The RBI Bought Over $48 billion in the last year

That’s Rs. 360,000 cr. worth dollars bought in the last year. About $9 billion worth since the pandemic started! 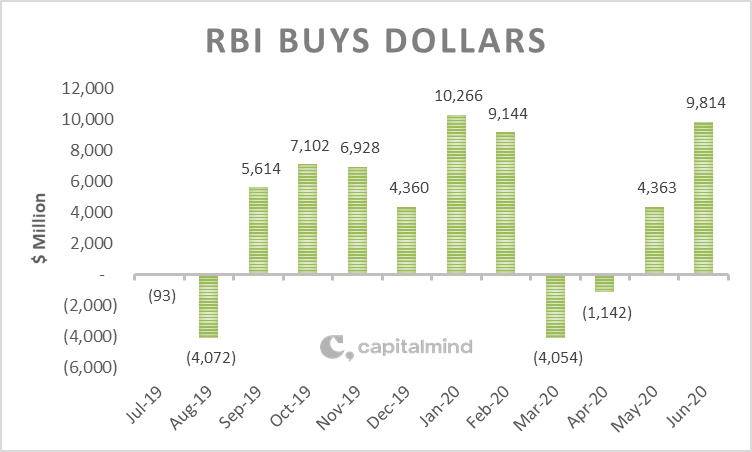 Why is this bad? Of course some of it would have been needed, when so many dollars have been coming in. Jio raised over Rs. 110,000 cr. and then a bunch of banks have raised over Rs. 45,000 cr. in the last month alone.

But the point is that dollar buying says one thing: The RBI funds the US government with this massive purchase (since most of the buying is parked in US Govt bonds)

That is nice for the US, and we see that the RBI in turn did something else: Deny the Indian government money.

Before we come to that, we must note that the RBI has expanded it’s balance sheet by 30% by printing rupees to buy:

So it’s not like they don’t like India – they actually bought a reasonable quantity (Rs. 180,000 cr.) of rupee bonds issued by the government. But there’s a problem:

RBI is Hoarding Money: They Stuff Funds But Will Not Pay Out Dividends

RBI’s balance sheet is absolutely huge and the equity generated is even bigger. In total, the RBI has 53 lakh crores on the balance sheet.

Of this, they have “equity” (initial equity plus retained profits) of Rs. 15 lakh crores.

This is roughly 29% of the balance sheet. That’s absolutely huge!

We have argued earlier that the RBI can free up a lot of this to pay the government a big dividend. Read: How the Government can get Rs. 400,000 cr. to fight the Covid Slowdown.

The Jalan committee has actually said: Look the worst case of the rupee rising is 20%. Your CGRA should cover that, max. And they said, okay do between 15% and 19%.

The excess buffer is over Rs. 277,000 cr. This can be transitioned to the government as dividend. How? Simple – just book the profit – work with public sector banks and offer to buy and sell the dollars from them immediately. This transaction books past profits (since the RBI keeps dollars in FIFO mode, and the earliest bought dollars will be sold first, and a profit will be booked. But at the same time, since the RBI buys back the dollars, there is no drop in forex reserves.

A simple accounting entry that will do two things:

Why give the government a dividend? Isn’t it the same thing as printing to buy bonds?

Because a bond is a debt. The higher debt the government takes, the more “vulnerable” it is.

The Indian government already has reasonably high debt (though it’s tiny compared to say the US, UK or even China). Even more debt could see a downgrade of the government.

But if RBI gave it a dividend, the government would see it as revenue and then borrow less, which reduces its need for debt. Remember, the highest expense of the government is interest payments: At Rs. 5 lakh crores a year, versus a defense expense of Rs. 3 lakh cr. a year.

But the RBI has chosen not to do this. And retain itself a big fat amount in it’s balance sheet!

The RBI isn’t giving the big dividend, and clearly wants to fund the US government and buy gold instead of helping the Indian government with a higher dividend. Therefore it’s obvious they will have to learn only by a massive crisis. (Either that, or the government can set up a cutoff limit on equity – which many countries do – and demand that any excess be immediately paid out. This is fair; everything needs the approach of checks and balances, and the Jalan committee report was clearly accepted by RBI and they have violated it in the second year, so a law can be pushed)

However, this is going to take time. So the RBI will only react when there is a serious crisis, which is anyhow coming up. And the government will be the one asked to rescue any banks or financial institutions in trouble. RBI on this front, has been miserable – they have still not resolved DHFL or IL&FS when they have been tasked with it – and there, they don’t even have to use their buffers; it’s all about selling the company’s assets.

What this means is: Don’t expect the RBI to help the government. They will only do so grudgingly. They will buy bonds, but only when yields rise so much that it’s unsustainable. There is no clarity of purpose, which is why, on Wednesday:

This is the widest spread ever, and effectively means long term interest rates are going up. With no dividend, and no intention for the RBI to add more bonds, we should expect that rates will be allowed to increase until some other tsunami hits us.

What we should be doing:

But we are more bothered, as a country, about people who have delivered food to some actress. Which is why I’m even happy you’re reading this far. We’re on our own, folks.