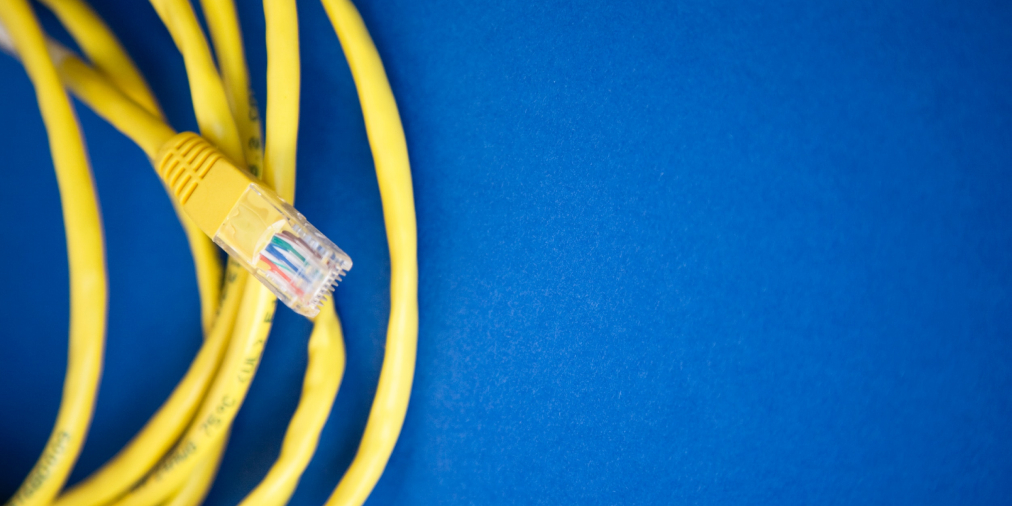 [This is a Premium article temporarily unlocked for non-subscriber access]

In the past seven years, the subscriber base for home broadband has grown at a compounded annual growth rate of 4%, while that of mobile broadband at 56%. Home broadband penetration in India is around 5-6% as against 80-95% in developed countries and 86% in China.

That is set to change as a the pandemic has created the perfect storm to boost broadband penetration in India.

The broadband market in India has been vastly under-penetrated and has hardly grown over the last 7 years. The market which even Mukesh Ambani controlled Reliance Jio Infocomm Ltd. failed to expand since its trial launch nearly two years back, is all set to see a jump start due to the outbreak of Covid-19.

Fixed or home broadband can be a winner in the evolving post-Covid world, benefitting from work and study from home culture. Home broadband which was earlier considered as an alternate entertainment medium has now turned into a utility like electricity, gas, and water.

As corporates adopt Work-from-Home policies, Students log onto classes from home, entertainment goes the OTT streaming services way, Broadband services are set to be the big beneficiaries. Click To Tweet

In the past seven years, the subscriber base for home broadband has grown at a compounded annual growth rate of 4%, while that of mobile broadband at 56%. Home broadband penetration in India is around 5-6% as against 80-95% in developed countries and 86% in China. 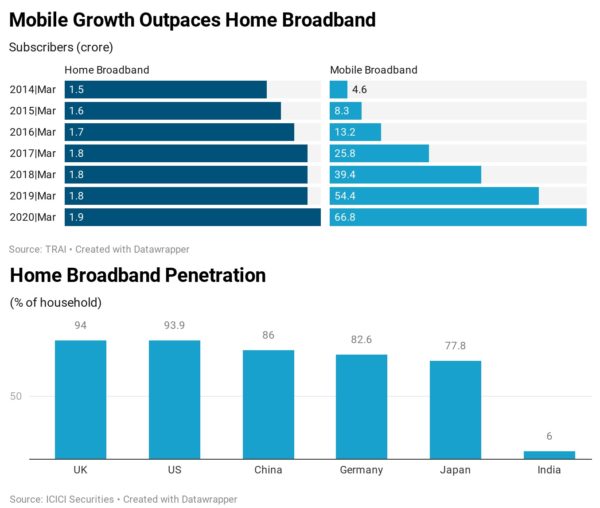 The slow growth so far was due to expensive pricing compared to mobile and pay-TV – cable and direct-to-home, and widespread rollout of 4G which offered high speed at lower prices. In India, mobile data is cheaper than home broadband whereas it is vice versa in other countries.

Subscribers use data provided on the phone, which is abundantly available, to access all contents on the internet. Similarly, in many countries, pay-TV is very expensive compared to over-the-top (OTT) streaming services plus broadband – which is a must to access the content. In India, cable and DTH are cheaper.

To view OTT content on TV, one needs to have a broadband connection. Thus, the combined charges of lowest OTT plus the lowest broadband plan is still at a premium of 32% compared to the most expensive pay-TV plan.

The growth in the sector was also cannibalised by the launch of the wireless service of Reliance Jio. The Mukesh Ambani controlled telecom operator entered India’s crowded telecom arena in 2016, wildly swinging the axe at rivals. The company offered high-speed 4G services first free and then by slashing tariffs and undercutting incumbent telecom operators. Its own price war in the mobile space seems to have come back to bite it in the broadband space.

The broadband market in India is dominated by state-run Bharat Sanchar Nigam Ltd. with nearly 42% market share. The space is not as fiercely competitive as telecom. Even Reliance Jio, unlike its entry in the mobile space, entered the broadband market, shunning aggression.

Unlike mobile telephony, the broadband space is not as fiercely competitive. Even Reliance Jio did not start a price war on entry Click To Tweet

Reliance Jio is the latest entrant in the sector. The company started trials in August 2018, while it commercially launched its services in September 2019. Even after its launch, the market has failed to expand.

Currently, in the broadband space, the largest player is the state-owned company where the service level is low, which means that the competitive intensity is low. One does not need to disrupt the market to get entry in the broadband space. There is adequate room for all to expand as it is a vast untapped market.

Mobility-like tariff competition is also not feasible because, compared to wireless, capital intensity in the broadband business is higher.

With a single tower, a telecom company can service around 1,000-1,500 users depending on the spectrum band. But in broadband, the investment has to be done for every home. Along with this, there are other overhead expenses and high service components involved which also needs to be considered.

BSNL has the largest fiber-based network — over 7.5 lakh route kilometres, followed by Reliance Jio which has 7 lakh route km, including the 1.8 lakh route km it acquired from younger brother Anil Ambani’s Reliance Communications Ltd. Bharti Airtel has over 3 lakh route km, while Vodafone Idea has over 1.6 lakh km of fiber spread across the country.

The pandemic induced lockdown and social distancing norms have led to a “rapid” surge in the need for home broadband, said Gopal Vittal – Managing Director and CEO of Bharti Airtel. Even Mukesh Ambani upped its target of grabbing 5 crore subscribers in the broadband business from 2 crore.

This is possible as video conferencing – usage of which has sharply increased since Covid-19 – requires good data connectivity while mobile broadband service quality and speeds are not reliable. Households will not hesitate to buy premium broadband services as they would save money from less commuting. Few companies have also started to reimburse home broadband bills to their employees, something like mobile bills presently. This could drive much higher penetration in the near term.

As per the statistics available on the income tax website, there are nearly 3.2 crore, salaried income taxpayers, while we have more professionals and people in the business. Home broadband penetration can more than double in the next few years if the work from home culture gains traction.

The plans offered by various operators vary depending upon the speed and data allowance provided. The plans offered by BSNL are the cheapest, but with low speed and hardly any add-ons. Bharti Airtel and Reliance Jio are the only providers with meaningful add-ons and high speed. However, generally, users seem to be fine with lower data speeds as long as they get higher data limits. Currently, Bharti Airtel has also started providing bundled plans. The ‘One Airtel Plan’ offers one bill for postpaid, home broadband, and direct-to-home connections. These plans collectively are cheaper compared to individual plans offered. However, it has not been launched on a pan-India basis and is currently available in only 8-10 cities, according to the company website. This opportunity to sell more converged services could be the way ahead and should help drive balanced revenue growth for the company across all services. 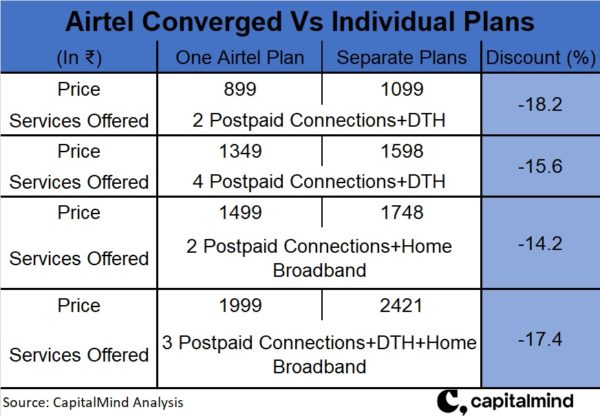 The biggest threat which currently looms over the expansion of the broadband market is the widespread rollout of 5G in India at lower prices. The launch of high-speed 4G at cheaper rates had impacted the growth of home broadband. Similarly, the next generation in wireless technology – 5G – which promises to boost data speeds by up to 100 times, making them competitive with the fastest wired broadband networks.

Mukesh Ambani in the Reliance Industries’ AGM speech did say that Jio’s network is 5G ready and it will be able to deploy the same as soon as spectrum is made available. The company has said to have developed a complete 5G solution. Recently, according to media reports, Reliance Jio has sought a spectrum in certain frequencies from the Department of Telecom for holding trials of the latest 5G technology.

Even the government is looking to push the usage of home broadband services in India. According to various media reports, the government may decide to lower license fees recovered on home broadband revenues. The current license fee is about 8% of the adjusted gross revenue, and this could be lowered to just ₹ 1 per year per circle. Such a move would cut home broadband costs and drive service providers such as Bharti Airtel, ACT, Reliance Jio Infocomm, and many others to aggressively expand their networks and boost broadband availability.

In the home broadband space, the company is expanding its presence in more cities from the current 111 cities and looking to penetrate deeper through a partnership with cable operators for last-mile connectivity. The company has seen its average revenue per user decline to ₹ 799 due to cheaper mobile data services and competition from Reliance Jio. The segment contributes 3% and 5% to its consolidated EBITDA and free cash flow. Quicker adoption of Jio’s home broadband will help RIL in selling the fiber assets faster. Currently, though the adoption of Jio’s broadband and sale of fiber infrastructure are mutually exclusive, they are still related. With the fiber assets hived-off to a separate unit, Jio will have to pay rent to the asset owner for using the assets. The rent could vary on the usage, which means that the fiber units’ revenue would vary on the usage of fiber done by Jio.

RIL is yet to find a buyer for its fiber assets and the agreement contours between Reliance Jio and the fiber unit are not yet disclosed.

For now, all else being equal, telcos should see improving financials as the surge in broadband adoption drives revenue to a less competitive albeit small business vertical.