In our article How the aviation market is performing amidst Covid-19, we saw that the airlines have their backs to the wall. They are losing money on their most profitable routes owing to price caps and lower demand. This does not seem to going away anytime soon. Indigo and Spicejet reported Q1 and Q4 results respectively. We took a look to see how they are coping.

InterGlobe Aviation, the parent company of budget carrier IndiGo, reported its biggest-ever loss of Rs 2,849 crore in June ended quarter as flight services remained shut due to the outbreak of Covid-19. During the lockdown, the losses were due to fixed costs, and as operations began, it was in the form of both – variable and fixed. Flying with lower utilisations turned on the tap of variable cost and led to more losses for the airlines.

Nearly 40% of costs are fixed for an airline and flight operations resumed from May 25.

Indian airlines were operational for only 37 days in June ended quarter, and during that period, IndiGo garnered revenue of only ₹ 767 crore.

Had it not been for IndiGo’s huge cash balance, the losses would have been much higher. At the start of the quarter, IndiGo had a cash balance of ₹ 20,377 crore, on which it earned a treasury income of ₹ 377 crore which aided its financials. However, for the June ended quarter, the cash balance stands reduced to ₹ 18,450 crore.

Had it not been for its cash balance of ₹ 20,377 on which it earned ₹ 377 treasury income, Indigo's losses in Q1 would have been even higher. Click To Tweet

For the June ended quarter, the company operated at a 10% capacity of last year, but for the ongoing quarter (Q2FY21) it expects the capacity to increase to 40% of last year. And for Q3FY21, IndiGo aims to deploy 60-70% of last year’s capacity.

As more and more capacity comes online, the total variable costs would inch higher. Currently, the company is burning ₹ 30 crore of cash daily after accounting for the revenue. During the lockdown, the cash burn was ₹ 40 crore daily. Currently, flying is helping the company to partially mitigate only its fixed costs.

In the last earnings conference call, the management said that it is looking to replace new NEO aircraft for older CEO aircraft. 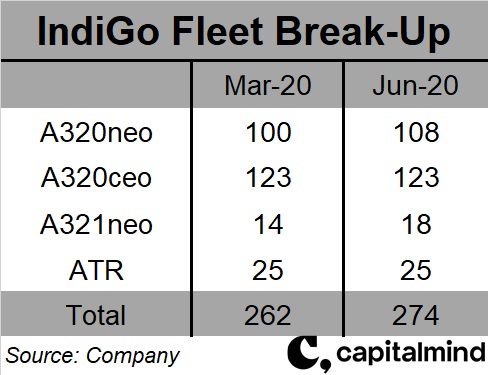 In the last conference call, the management said that it is looking to generate ₹ 3,000-4,000 crore of additional liquidity by asking favourable credit terms from suppliers, not paying dividends,  freezing supplementary rentals, and aligning them with utilisation and by returning older CEOs and taking deliveries of NEO aircraft. In the current conference call, the company said it will now generate additional liquidity of ₹ 2,000 crore by working on sale and leaseback of its owned aircraft.

The company owns 29 aircraft of which 12 are ATR – used by IndiGo to build its regional network – while 3 are older CEOs and 14 are older NEOs.

Will a lessor look to sale and leaseback aircraft?

The chances of a lessor doing so on favourable terms look difficult not only because of Covid-19 but also because most of the aircraft are old.

In the last four years – when the operations were at peak – the company was able to increase its free cash by ₹ 9,100 crore after considering the dividend paid. And now in one year, with subdued operations, the company aims to generate ₹ 5,000-6,000 crore of cash.

Not impossible, but definitely a tall task to achieve.

For IndiGo, the passenger split is 50:50 between leisure (visiting friends or relatives) and corporate travel. According to the company, corporate (top-end customers) travel has still not come back. The pandemic which forced many corporates to work-from-home, also educated them that ‘you don’t have to travel to get your work done.’ This is bound to make a permanent dent on the number of passengers flying.

The pandemic which forced many corporates to work-from-home, also educated them that you don’t have to travel to get your work done. Click To Tweet

Businesses are currently reassessing how much flying they need to do in the future. Corporates will still need some face-to-face contact, but they need far less. More importantly, the company is currently seeing weak VFR (visiting friends or relatives) traffic due to increasing coronavirus cases in India and due to travel restrictions imposed by state governments

The board of the company will be meeting on July 30, to consider fundraising via debt, equity, or convertible instruments. If the company has plans to raise ₹ 5,000-6,000 crore of liquidity (as mentioned earlier) in FY21, then why at all does the company need a round of fundraising?

The losses incurred by the company have eroded nearly 50% of its networth and if the company is expecting further losses in subsequent quarters, then it might look to raise funds for recapitalisation. So most probably, the company would raise funds via equity. 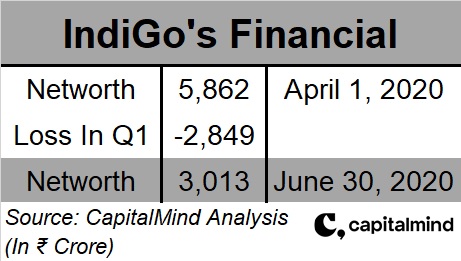 According to media reports, the company is looking to raise close to ₹ 3,000 crore. If funds are raised via a rights issue, then there will not be any dilution provided all shareholders participate. However, in case of a QIP – which most probably would be at a discount, there would be dilution.

India’s second-largest airline – SpiceJet Ltd. – reported a net loss of ₹ 807 crore – biggest such loss in at least the last two decades owing to lower ticket prices, adverse foreign exchange movement, and shutdown of flight services. Flight services remained shut due to the outbreak of Covid-19 in the last week of the quarter.

The quarterly loss reported by the company is nearly one-third of its market capitalisation and 20 times its cash balance of ₹ 41 crore as of March 31, 2020.

Further, the company commenced freighter operations during Q2FY19 with one B737 freighter and is currently operating five freighters. While the company is optimistic about the freighter opportunity, it has reported a loss of Rs 140 crore till date from the start of operations. Though the business is in its infancy, these losses are mounting pressure on overall profit.

The absence of fuel-efficient and brand new 737 MAX aircraft due to delay in regulatory approvals is putting the company under pressure. Currently, the company’s per-unit cost is high, and with lower operations and capacity, the losses are expected to further surge for the airline. It is imperative for SpiceJet to rein in cost. The 737 MAX aircraft is designed to deliver 12-15% lower fuel burn and 10% lower maintenance cost. It will hold the key to profitability.

The two leading industry players are struggling with the impact of the pandemic and potential longer term changes to consumer behaviour. As far as they are concerned, a vaccine cannot come soon enough.