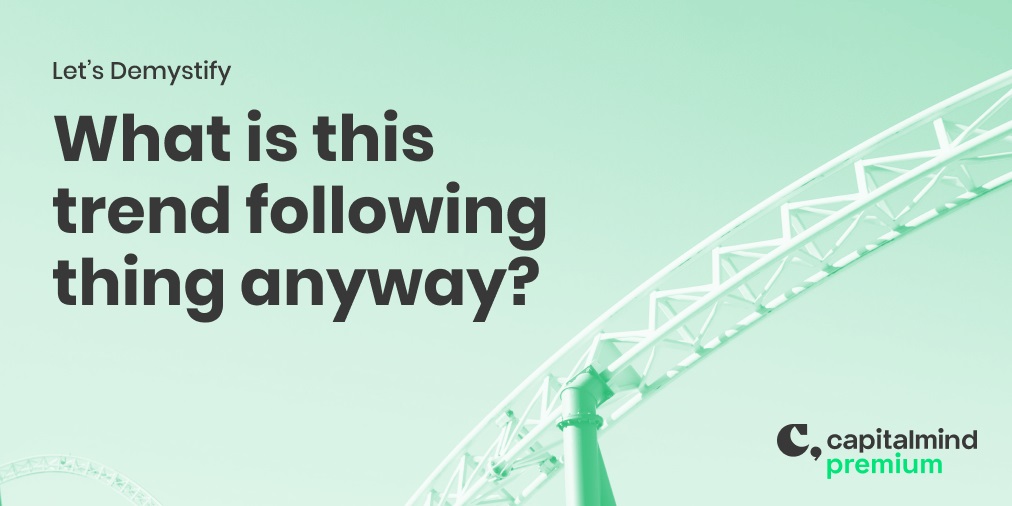 My kids are huge fans of Formula 1. The races have them glued to a TV screen for the full two hours or so that it takes to finish a circuit at blazingly high speeds. I was a fan of F1 for a long time myself, during the era of Schumacher and Hakkinen and the like. My favourite was Schumacher and Ferrari, and I asked my kids who they loved. Their answer: Hamilton and Mercedes.

To me, that’s almost sacrilege, but I ask them anyhow: Why?

And their answer: Because he wins.

That was exactly why, perhaps, that I loved the time of Schumi. Because he won.

And that, my friend, is Trend Following. Read on, as Sandeep takes us through the nuances in this first part of a series on the concept.

Note: I should have moved to Mercedes. But I’m still cheering the prancing horse on the inside, every once in a while. Don’t be like me, be with the winners.

In this post we’ll dip our toes into the idea of Trend Following.

Let me start by painting the landscape for you a bit

If you are reading this post, in all probability, you would either be a trader or an investor. The difference between both is more in terms of the intended holding period of the security, nothing else.

A trader intends to hold the security for a relatively shorter period compared to an investor. You would notice that tax regulations also categorize speculation and investments based on a holding period.

Let’s look at the trading strategies these two categories of speculators use.

If you put together all the strategies in the world of trading and investing, you would notice something. All the strategies use one of two primary sources of information, Price data or Fundamental data.

Traders would use Price data as their source, and Investors would use Fundamental data, which includes things such as cash flow, return on assets, etc.

These two sources of data, i.e., Price and Fundamentals, lead to five different sources of alpha.

Alpha here means, generating returns over and above risk-free rates.

Take a look at the figure below. 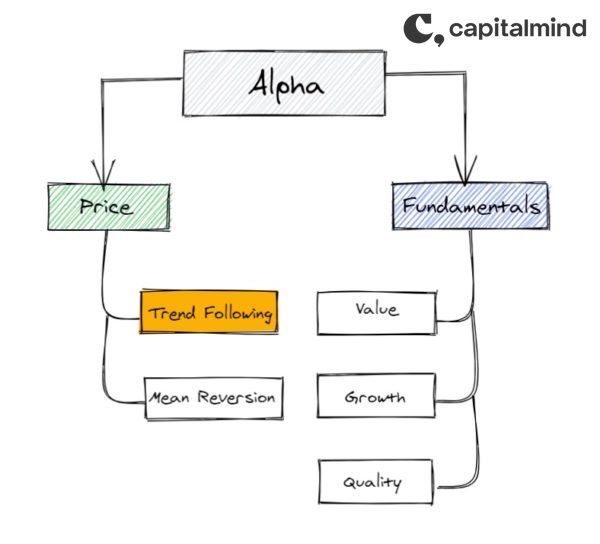 Adapted from A Taxonomy of Theory-Driven Alpha Models Pg. 25 – Inside the Black Box: The Simple Truth About Quantitative Trading by Rishi K Narang

If you are a Trader, your source of alpha would be Price, and you would need to be either a Trend-Follower or a Mean Reversion trader.

I’m sure you are familiar with the CM Momentum Investing Portfolio strategy, it in a way, falls under the broader Trend following bucket. However, there are some differences between both, something that I would visit later in the post.

If you are an Investor, you would have three fundamental strategy choices when it comes to generating alpha, i.e. Value, Growth, and Quality. A cursory glance at the CapitalMind Investing portfolios, and you would be able to see individual stocks that typically fit into one of these three buckets.

The focus of this post and the whole series would be on trading using Trend-Following as a strategy to generate alpha.

That’s fine, tell me what Trend Following is?

Trend Following is a trading strategy based on the idea that markets move for long durations of time in a given direction, and one can quantitatively identify such a trend and ride it.

Trend Following is also referred to as Time-Series momentum as we are mostly looking at price data. Price data belongs to a category called time-series data, i.e., data that has a series of successive time units attached to it.

Remember, I raised the question earlier as to how Trend Following is different from Momentum strategies.

The key difference lies in the reference point used to identify a trend versus a momentum. For Momentum, we use the Performance of stocks as compared to other stocks in a given universe. In contrast, in Trend Following or Time Series momentum, we compare the current price of a stock/Index with its historical price.

Who were the pioneers? Did they make any money?

Legendary traders like Richard Donchain, of the Donchian Channel indicator fame, were the pioneers of Trend-following strategy. Later in the ’80s Richard Dennis and William Eckhardt of the turtle traders’ fame brought it to popular literature.

The Turtles’ story is an interesting one. Richard Dennis and William Eckhardt recruited a bunch of newbies with no prior trading experience. The idea was to train them on systematic trading and see if they could become profitable traders. If this piques your interest, read this blogpost Deepak wrote about them.

Then, there was this company, Commodities Corporation (CC). It was a privately held commodities trading firm, located at Princeton NJ. I bet not many of you would have heard about them. They were a very different breed.

A RenTec (Renaissance Technologies) equivalent of sorts in the Quantitative Global Macro and Trend following space from early 70’s to late 1990’s when Goldman Sachs acquired the firm.

I mention RenTec as a comparison because CC, too, was extremely secretive and was very think tank like.

Helmut Weymar, a Ph.D. in economics from MIT,  who started as a commodity manager at Nabisco, his mentor Amos Hostetter, Sr. a legendary commodities trader himself and his colleague Frank Vannerson founded the firm.

Its board included Nobel Prize winning Economist Paul Samuelson and Prof. Paul Cootner, who was one of the early contributors to the Random Walk Theory, both were professors at MIT and had taught Weymar.

Not just that, CC gave birth to legends such as Bruce Kovner, Paul Tudor Jones II, Michael Marcus, Ed Seykota, and a few more. All that, while producing a staggering compounded annual returns of 24% over 27 years.

Read this story that featured in the Fortune magazine way back in the 1980s; you may like it, if you have time on you, read the book “More Money than God” by Samuel Mallaby. I leave you with an excerpt from the book.

On the other side of Atlantic, sometime in the late 1980s, two Oxford-trained physicists Mike Adam, and Martin Lueck, along with Cambridge graduate David Harding, set up a Quantitative trend-following fund called AHL, which was later taken over by the Man group.  They too, had phenomenal success over the years, achieving double-digit performance for close to two decades.

After the takeover by Man, the trio split, Harding went on to start Winton Capital, Lueck setup Aspect Capital, and Adam left the industry to join a music band.

The trio share their discoveries and difficulties, in this three part series, as they went about setting up AHL.

While these companies were the pioneers in the field, even today, almost all CTA’s and Hedge funds do run some Diversified Futures Trend Following strategy.

The fact that trend following has withstood the test of time, tells me there is something profound about it. As Martin Lueck says “As a species, we have not evolved very much – in terms of the crowd behaviour that drives trends”

Are there Trend-following funds in India?

The whole PMS and the AIF space, which are regulatory equivalents of the CTAs and Hedge Funds of the US is pretty nascent in India. There are long-short trend-following AIFs in India, and some PMSes may also be following a similar approach. Still, there is minimal information about their strategies in the public domain.

A few SEBI Registered advisors have model portfolios of trend following strategies, which operate more like black-box models, with limited information in the public domain about the specifics of the strategy.

The classical trend following strategy is a diversified strategy, across assets classes, ie. The crux being, irrespective of the wider macro-environment, there would be some segment that would be trending, which would contribute to the alpha.

The next best approach would be to combine a long-short trend following system, typically on an index, with a Long only Equity portfolio.

Here the Long-short strategy would act both as a hedge on the down side and a multiplier on the upside, making the return profile convex in a sense.

One can also look at trading stocks and commodities individually using a trend following system.

However, they would not offer the benefits of diversification. Besides, evidence suggests that diversified products like indexes exhibit far more robust trends compared to individual stocks and commodities.

In this series, I will apply a simple trend-following model on the ^NIFTY50 Index to use that as a hedge against a long-only Equity portfolio.

Let’s take an example of the ^NIFTY50 Index to see how it plays out if we plot the popular 200 Day Moving Average.

I use moving averages as they provide a good reference point to look at a trend both visually and quantitatively.

Watch the point when an up-trend starts, price tends to move in that direction for months if not years. Likewise, with down-trends, though in the long run, markets tend to go up more often, i.e., more than 70% of the time, than down.

When does Trend Following work better, I mean, which Market regimes?

There are no generalized ideal regimes, as it depends on the length of the trend that we are optimizing for.

You could be trading a trend following system, which looks at the end of the day (EOD) close data or hourly or perhaps a 10 minute intraday close values, each of these would need a distinct regime where they would perform well.

Trend following strategies usually have low win rates. For the math to work in your favor, you would need to ensure that the risk-reward ratios are high enough.

Listen to Martin Leuck of Aspect Capital talking about preparing his clients about the risk profile of a Trend following system.

The adage, “Cut your losses short and let your profits run” summarises the idea quite well. Incidentally, it was coined by the English political economist David Ricardo, way back in the early 1800s. Maybe, he had trend-following in mind when he said that.

Over the coming weeks, we will continue on this quest to learn why Trends exist and why Trend Following as a strategy works.

Next in the series – If you can’t measure it, don’t trade it – Quantifying a Trend