The ₹27,000 Crore Indian tile industry is fragmented, 55% of it is with small regional players and the remaining 45% with large organized players. Somany and Prism Johnson have 6% each of the overall market and 15% of the organized pie. The market leader, with 11% overall share is nearly 2x the 2nd largest player in terms of sales, and more than 2x the after-tax Profit. They have recently forayed into the Bathware segment and have seen encouraging initial results.

In the first of this two-part series, we look at the size, structure, companies and drivers of the tiles segment.  Part 2 will go into the bathware segment and some interesting crossovers in play.

We recently did a deep dive into the Indian Paint industry and looked at why Asian Paints has and will continue to dominate the space.

Tiles can be used on floors, walls and roofs, they are made from clay and other materials. China clay and Ball clay constitute 33% and 23% of raw material by volume in manufacturing of tiles. All tiles are largely classified as ceramic tiles, there are two sub groups under this classification

Some of the characteristics of ceramic tiles in comparison to vitrified tiles are – porus – high water absorption, less durable, less scratch resistance, less strength, not slippery, cheaper, not easy to maintain and difficult to install.

The top manufacturer of tiles in the world is China. It manufactured 5,683 MSM (million square metres) in CY18. China accounted for 43% of the global tile production.

China is the largest manufacturer of tiles in the world, accounting for 43% of world tile production. Click To Tweet 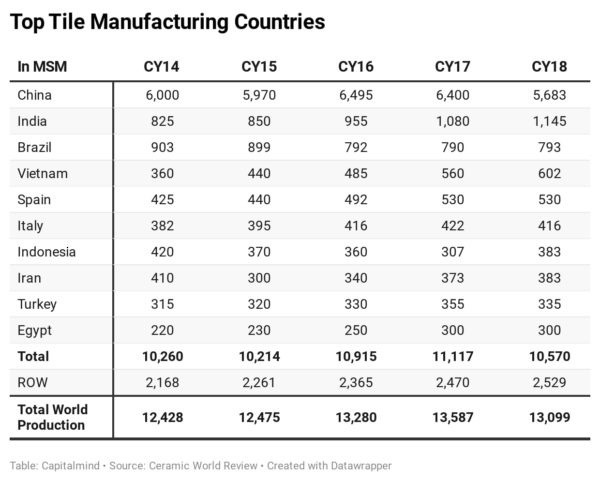 China is also the largest consumer in the world. Chinese domestic consumption in CY18 was 4,840 msm, 38% of world consumption. 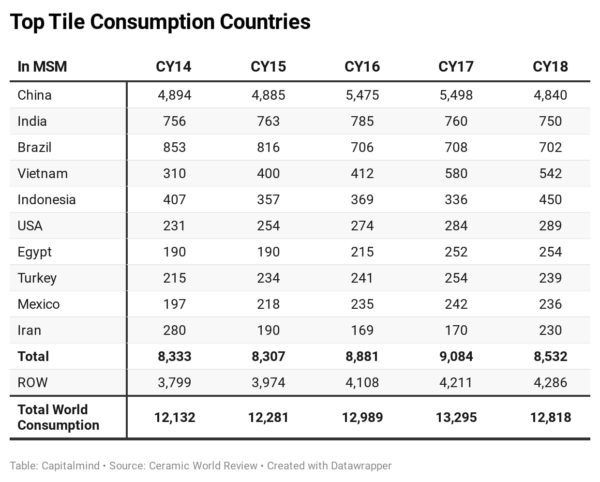 Recently there has been anti dumping duty on exports from India. GCC the largest importer had announced a provisional duty of 40% to 106% on Indian tiles. These duties will impact Indian players. 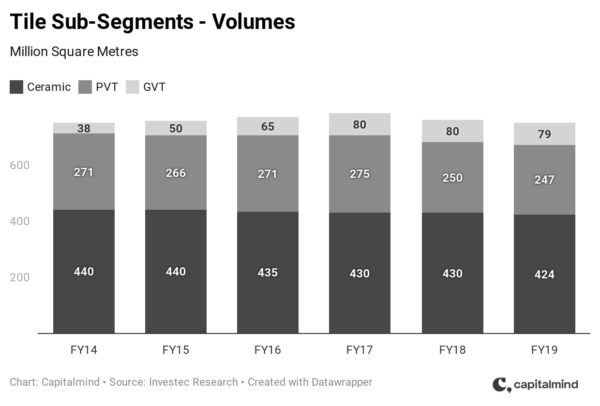 The ₹27,000 Crore Indian tile industry is fragmented, 55% of it is with small regional players and the remaining 45% with large organized players. Click To Tweet

70-75% of the tile demand comes from the residential segment, 10-15% from the commercial space and 10-15% is the replacement demand. Tiles unlike paints do not require frequent replacement.

Snippets from the Tile Industry

Morbi in Gujarat is the hub for tile production. 70% of India’s tile production happens there. The other tile clusters in the country are in Rajasthan, West Bengal, Andhra Pradesh and Tamil Nadu. Why is Morbi the tile hub in India?

Some of the reasons are

In the tiles business, companies can adopt a combination of these models to manufacture tiles – own, joint venture (JV) and outsourced. The return ratios in the outsourced model are better than the other models, however the company does not have control over the quality of the product. 55% of Kajaria’s capacity is its own, with 45% being through JVs and outsourcing. However in the case of Somany, 42% of its capacity is own, while 58% is through the JV and outsourced route.

Manufacturers of tiles do not have pricing power, this is due to intense competition. In addition, large customers require customised designs and sizes and which manufacturers have to fulfil to be in business. Another reason why companies do not have pricing power is due to the large part of the industry being unorganized. Unorganized players can compromise on quality, larger cash structure in manufacturing and share resources to keep prices competitive.

There is a shift to digital tiles, by using the digital technology companies can offer a variety of designs and reduce its working capital (low inventories), also tiles can be made to order. On the flip side, companies have to invest regularly in technologies to keep up to the latest offerings. Recurring investments impacts profitability and return ratios. Larger tiles are being preferred to smaller tiles.

With the GST, shift from the unorganized to organized may be seen in the future. Some of the reasons that will help in this transition

Kajaria is the largest manufacturer of ceramic/vitrified tiles in India and 9th largest in the world. The largest tile company in the world is Mohawk Industries in the USA, it has an installed capacity of 223 msm and sales of $3,631 million in FY19.

The largest tile company in the world is Mohawk Industries in the US. It had sales of $3631 Million in FY19 Click To Tweet

Some of the reasons for Kajaria doing better than the industry are – branding, wide distribution network, higher SKUs, change in product mix and entry into the bathware segment.

Kajaria’s capacity is 73 msm, highest in the country. 38% of this capacity is ceramic tiles, with the balance 62% being split equally between PVT and GVT. GVT capacity has grown by 19% in the last 5 years as compared to 2% for the other segments. GVT tiles fetch higher realizations and margins than ceramic and PVT tiles.

Kajaria has a dealer network of 1,500 dealers, the company had 900 dealers in FY14. The company is expanding its dealer base in tier 2 and 3 cities, it has added GVT capacity in the South, this will enable the company faster access to the Southern markets. It has separate showrooms for different segments of tiles – Kajaria Star, Kajaria Prima, Kajaria Prima Plus and Kajaria Eternity are some of the showrooms of the company.

Advertising and promotion are key in developing a brand. Kajaria’s advertising expenses as % of sales in FY19 was 3.1%, this has been inching up over the years. It also has famous personalities endorsing each of its segments – Tiles, Bathware and Plywood.

We look at the important financial metrics of the company and compare the same with other standalone tile companies – Somany and AGL. 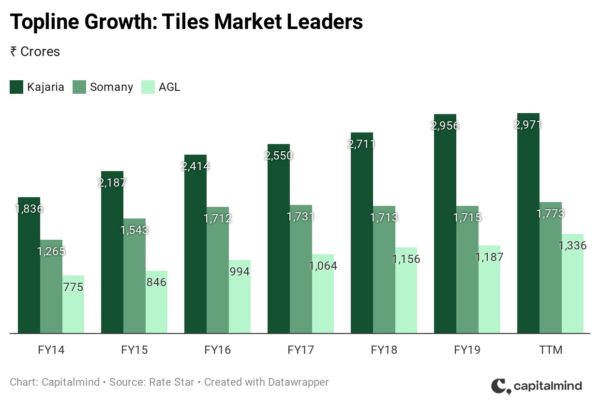 The growth in the case of Kajaria has been entirely on the back of volumes. Volumes have grown by 9% from 52 msm to 80 msm. This implies that companies in the tile space have been facing pricing pressure, that is on the back of over supply in the market. A point to note is the split in volumes by ceramic and vitrified tiles (PVT and GVT). The share of vitrified tiles was 52% in FY19 versus 45% in FY14. Ceramic tiles have lost share from 55% in FY14 to 48% in FY19.

Below is the breakup of Kajaria’s sales, segment wise for the FY17-19 period 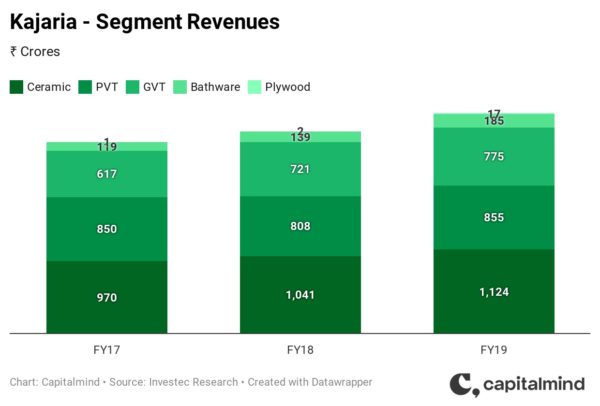 Observations from the above chart 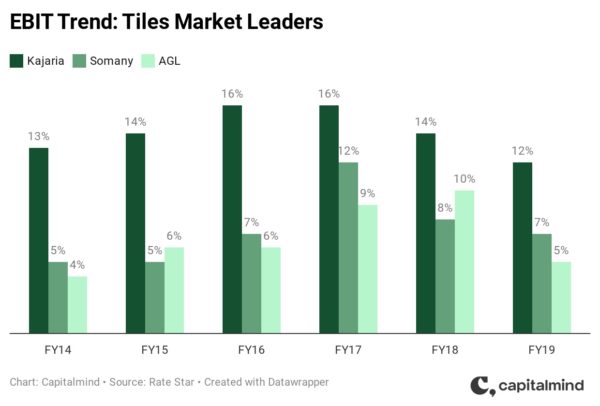 Kajaria’s margins are way ahead of the other companies. The average margins for the 6 year period for Kajaria is 14%, whereas for Somany and AGL the margins were 7%. Some of the reasons – distribution, SKUs and advertising have been discussed earlier. One more point to note and that helps in better margins is the share of GVT sales. GVT sales were 28% of total tile sales in FY19 for Kajaria, for the industry this stands at 10-15%. GVT fetch better realizations and margins for companies.

The 6 year average EBIT margins of the market leader are 2X of Somany and AGL. Click To Tweet

Somany’s operating profit profits have seen the fastest growth – 15% in the FY14-19 period. Kajaria and AGL have registered growth of 9% and 10% respectively. 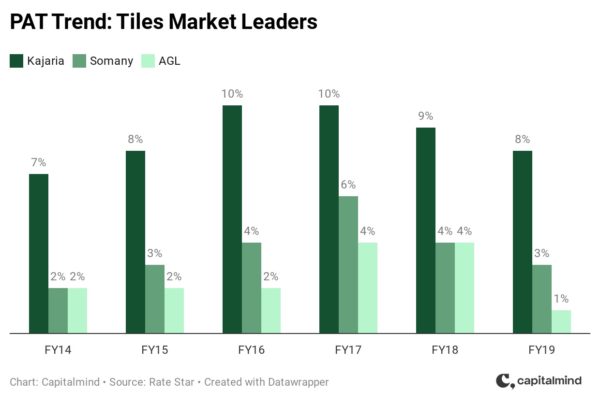 Working capital is an important metric in any business, how does Kajaria fair here? Below is the cash conversion cycle of the 3 companies for the FY14-19 period One of the sources of competitive advantage for Kajaria is its cash conversion cycle (CCC). The CCC of Kajaria is way better than Somany and AGL. Kajaria’s receivable days are the best in the industry, its average receivable days for the FY14-19 period is 40 days, as compared to 72 and 82 days for Somany and AGL. Its inventory and payable days are also better than the industry. 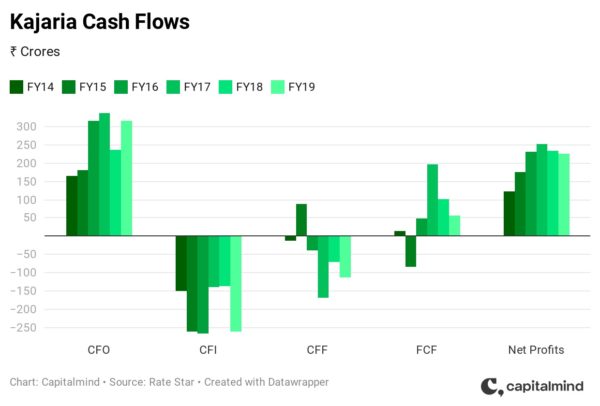 Observation from the above chart

Companies in the tile space are entering the bathware segment and bathware players in the tile space. This is to provide total solution to the customer. Kajaria’s bathware growth has been phenomenal and it has all the ingredients to scale this up.

Organized companies in the space are well placed to take advantage as they have strong distribution networks across the country, strong brands and can outsource their manufacturing and focus on the other levers of the business.

Kajaria among the organized players is well placed to take advantage of the developments happening in the tile and bathware industry. The company is also entering the bathware space, growth rates have been very impressive, though this on a small base.

Kajaria trades at TTM PE of 20X. Median PE for 8,5 and 3 years is 33, 36, 37. The current EV/EBITDA of the company is 12X, its average EV/EBITDA for 8,5 and 3 years is 16,18,18. It has negligible debt on its books and generates positive cash flows. However there is uncertainty in the current environment and results over the next few quarters will not be up to the mark. The market may provide with opportunities during those times to enter the stock.

In part 2 of the post we look at the bathware industry, we also try and answer the all important question

Read Part-2[Premium access] on how tile makers are moving into faucets and adjacent segments.